Morphite ($7.99) had a lot of expectations to fill when it was originally announced more than a year ago. Not really from its own doing, but the fact that the game’s premise and to a lesser extent its visual style was so reminisent of Hello Games’ No Man’s Sky meant that eager mobile gamers were hoping for that “No Man’s Sky in your pocket" experience. With Morphite finally launching across iOS, Steam, Xbox One and PS4 this week (with Nintendo Switch and Android versions coming soon), we got to witness firsthand if the game lived up to the lofty expectations gamers had been setting for themselves or if it was able to carve out its own unique experience and identity. 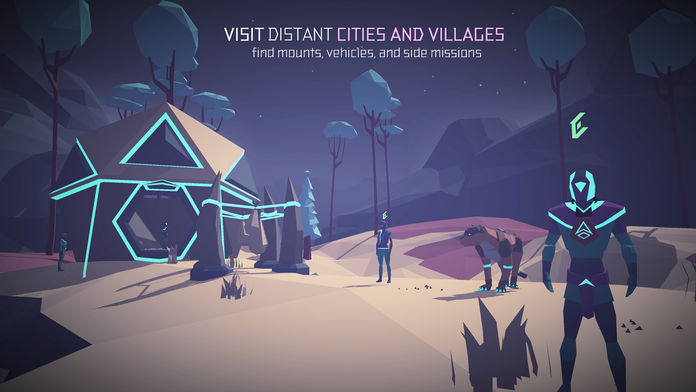 From my perspective, it’s more the latter than the former. Sure Morphite is a first-person adventure game where you can travel to thousands of randomly generated planets, exploring and scanning the terrain and squaring off against hostile entities through gunplay. It definitely has similarities to No Man’s Sky. However, Morphite is a game with (obviously) a much smaller scope, and that’s actually to its benefit. The planets that you explore are actually very large open areas, not full-sized planets, which is much more manageable in terms of being able to progress through the game. Also, the story in Morphite is much more focused and engaging, if a bit cliché. There is a really compelling world to discover and lots of interesting characters and lore, which is the central driving force to continue on in your endeavors.

Story aside, though, Morphite is also a fantastic game for creating your own adventures. The landscapes may be a bit sparse, but with their smaller scope they are also filled with lots of neat plants and animals to discover. In a page out of Metroid Prime’s book, you can scan these living things and it acts as sort of a loot system with common and rare plants and animals to discover and scan. You can then turn around and sell your scans for money which you can use to upgrade your character’s suit and ship. I’ve really enjoyed jumping to random planets just to see what I can find in between completing the story missions, and I can see myself continuing to do so even after that storyline is completed. My favorite part of any open-world sandbox game is just exploring for exploring’s sake, and Morphite delivers that in a more bite-sized fashion which is ideal for a mobile game.

It’s not without its issues though, as certain aspects of Morphite’s control scheme can feel clunky under pressure and I’d do pretty much anything to have a dedicated scanning button rather than having to constantly switch to my scanner manually. Also it could benefit from a greater variety (and greater number) of plants and animals on its planets to avoid things getting too repetitive. The thing is though, Morphite has found that special sauce that makes a game just plain fun to play despite its flaws, and things are so streamlined that it all works very well as a mobile touchscreen game. I also absolutely love the art style and the amazing color palette, and frequently stop just to take in my surroundings.

Morphite is the kind of game that will tickle your sci-fi sensibilities in the best way, and it truly is an impressively large galaxy you can carry around in your pocket. It may not be the same scope as something like No Man’s Sky, but it also doesn’t have to be. Morphite has carved out its own niche as there’s really nothing else like it on mobile, and with the positive reception it’s seen so far I hope we can continue to watch this interesting universe expand and flourish into the future.