It’s hard to believe that only a couple of years ago, Square Enix was dedicating a significant portion of its booth space to mobile games. This year, it was hard to see anything but Final Fantasy 15 spin-offs and add-ons in Square’s space. They had a dedicated area for the upcoming PlayStation anniversary edition of Itadaki Street, a small space for Secret of Mana‘s remake, and an area for the popular MMO Final Fantasy 14. The only speck of mobile gaming to be found was in a video showing off the upcoming Final Fantasy 15: Pocket Edition. 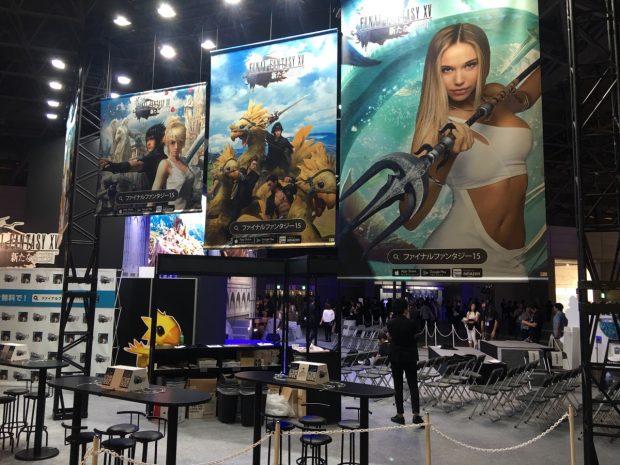 That’s not to say that mobile isn’t of importance to Square Enix. Their annual TGS booklet dedicates a full quarter of its 48 pages to the publisher’s mobile offerings. But outside of a couple of previously-announced offerings like the upcoming port of Hanjuku Hero and Final Fantasy 15: Pocket Edition, almost every included game has not only already been released, but in some cases has been running for years. Mobius Final Fantasy, Brave Exvius, Record Keeper, Kingdom Hearts Unchained X, Bravely Default: Fairy’s Effect, and more are all given their own dedicated spaces in the magazine.

Perhaps Square Enix is just coming to the same realization that many big Japanese publishers are: the main audience for these games are not typically the sorts of people who tune into news about game shows and exhibitions. With the publisher’s mobile focus overwhelming tilting towards free-to-play social games, there may not be much point in setting aside a portion of their limited booth space when they could just buy a TV ad or something similar instead. It is a bit of a bummer, though, as I used to really look forward to checking what they had to offer. It would have at least been nice to get to play Final Fantasy 15: Pocket Edition. Oh well, I’m sure it’ll be out soon enough.