I like playing card games like Hearthstone and Elder Scrolls: Legends, but sometimes I get the itch for some more tactical gameplay, which is why I’ve been waiting to get Duelyst on my phone for quite some time now. Stormbound (Free), a game that has released globally this week after a few months in soft launch, brings to the table a fun combination of card collection and tactical gameplay that looks simple at first but has enough tactical depth and interesting ideas to scratch that itch. I’ve been playing it quite a bit this week, and I’ve been having fun playing both against the AI and against others. My only reservation is that matches take a bit too long and that the threat that is pay-to-win does rear its head here and there.

Stormbound is played on a 5 by 4 tile board with a base on each side. Your goal is to take out the other player’s base, and you play cards on each of the four lanes in order to do that. You get one mana per turn, just like Hearthstone but with no upper limit, so the further the game progresses, the more cards you can play. The cards are minions, spells, and buildings, and when you play a card on one of the lanes, it moves forward by itself until it’s either taken out or it damages the enemy’s base. Units have only three stats: mana cost, attack, and movement. So, if your unit of 5 Attack takes 5 damage, it’s destroyed. If it takes 2 damage, then its Attack drops to 3. 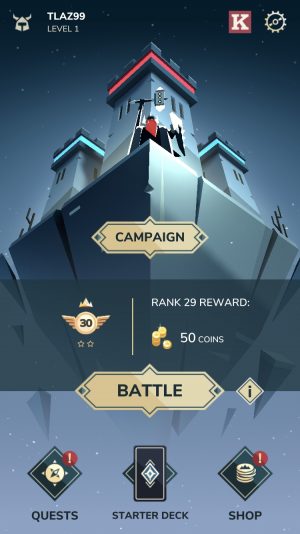 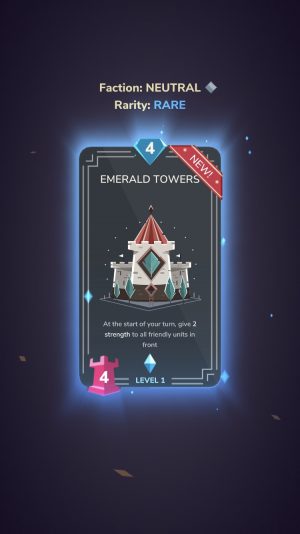 Cards can be leveled up in a Clash Royale kind of way, where you need extra copies of each card. Cards become gradually powerful when leveled up, and it’s definitely an avenue for more pay-to-win moments since it’s unclear how the game balances out decks for card levels. And it can be confusing to figure out while playing what level each card played is, especially since as far, as I can see, there’s no card history while playing.

You collect cards through completing quests, advancing in Ranked play, or playing Campaign matches. The Campaign sounds more interesting than it actually is since as far as I could tell, there’s no real story; it’s more like playing matches against each of the four kingdoms to earn cards and build your deck. What I did like is that in Ranked play, you get rewards each time you hit a new rank instead of getting the awards at the end of the ranked season. And you can always get cards by buying packs.

Each turn you have 4 cards in your hand, and you’re allowed to switch out one, which overall works well by having enough randomness so you don’t have the best cards in your hands the whole time while at the same time giving you some control over the cards in your hand. The interface for switching out the card can be a bit fiddly, though, and can lead to accidental switching if you aren’t careful. 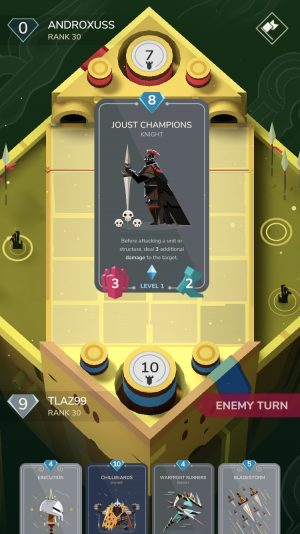 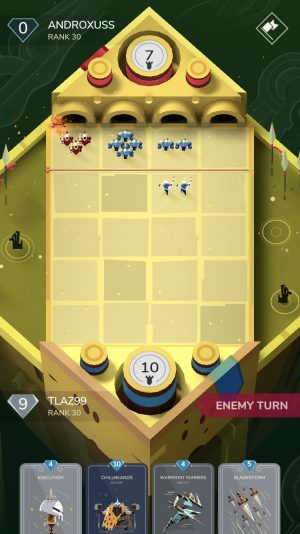 The placement of units on the board matters greatly because you can only deploy a card on the tiles ahead of your furthest unit. Otherwise, you can only deploy units on the first row of tiles. This rule can really affect tactics because sometimes you’ll want to play a unit you’d rather save for later just to be able to deploy units further down the field on the next turn. And, of course, your opponent will have to weigh whether it’s worth taking out those units to force you back down the field or play his own units to further expand his own deployment zone.

Buildings are a fun addition to the game partly because of the deployment rules mentioned above. While sometimes you’ll want to play your buildings defensively—to protect a lane from incoming enemy units—you can also play those buildings offensively by placing them further down the field and pushing your deployment line closer to your opponent’s base. And, as you unlock more cards, you get access to buildings that give you all kinds of bonuses (+1 strength per turn to units, extra mana, etc), which allow for even more interesting tactical decisions. Buildings, though, do seem a bit overpowered at the moment because not many units can take them out easily. I’ve seen some players complain that they promote turtling tactics, and I think they are right.

And the game’s art is really cool; it looks a bit like the opening sequence of Game of Thrones, with cool-looking minimalist art that mixes 3D and 2D pretty well. The card art looks good, too. Overall, Stormbound is definitely a looker that looks and plays great on your iPhone one-handed, which isn’t always the case with most tactical CCGs on mobile.

The one main issue I see with the game is how long matches can last. I’ve had numerous matches easily go over 15 minutes, which is a long time in mobile gaming time. Part of the reason for the length is the deployment zone rule, with units often having to start at the very first tile. It takes a while for units to move up the board, and since units are easily destroyed, there’s a lot of back and forth required if you are to take down the enemy base. And while these rules do help make matches more tactical, they also make them pretty long.

Another issue I have is not enough explanation of the nuances in the game’s movement and attack rules. For instance, units can sometimes attack sideways, but it’s not always clear why a unit will attack to the right and not the left. Or some units can attack behind them but others cannot. Unclear rules can make for frustrating moments since your plans can go awry.

Overall, I like Stormbound quite a bit so far, and even though I don’t have that many cards and haven’t built too many decks, I’m having fun both in solo and multiplayer mode. There’s room for improvement (maybe bases need less health so matches end faster) and rules need to be clarified, but overall Stormbound seems to be an entertaining and good-looking tactical CCG that I plan to continue playing. Unless it turns out to be full-on pay-to-win, of course.