We’re likely only a couple hours away from Apple throwing the switch to release iOS 11 to the world. Once you update, 32-bit apps like the TouchArcade app along with a ton of other games will no longer work on your iOS device. It sucks, but it’s a reality we’ve all been slowly coming to grips with since Apple started warning people with pop-ups any time you launch a 32-bit app. Even though the TouchArcade app has been dying a slow and silent death, we’ve got some cool plans for the future.

First off, as we’ve reiterated many times now, simply updating the TouchArcade app isn’t that feasible for us. Not long after we released the app, Apple updated their developer guidelines both restricting apps which recommend third party apps and apps that appear to duplicate the functionality and look of the App Store itself. Unfortunately, the TouchArcade app is guilty of both things, and to get an update approved by Apple we’d need to completely rework the look, feel, and user flow of the app as those are pretty major components. Not long after the app was released, Apple started rejecting our updates, so investing any major resources into it has been a lost cause for years now.

Thankfully, the app has continued to work all that time. Aside from having a gnarly looking icon and scaling a little weird on modern screen sizes it’s been totally fine prior to the 32-bit cutoff. If you’re curious about the saga of the TouchArcade app, I dig into it a bit more in this post and this forum thread. Since continuing iOS app development is a dead-end for us, we’ve shifted gears to working on greatly enhancing the mobile view of the site. The goal is offering complete feature parity with our iOS app, as well as a great mobile web site that will work on any mobile browser completely independent of whatever weird Apple policy Apple institutes next. Here’s what it looks like so far: 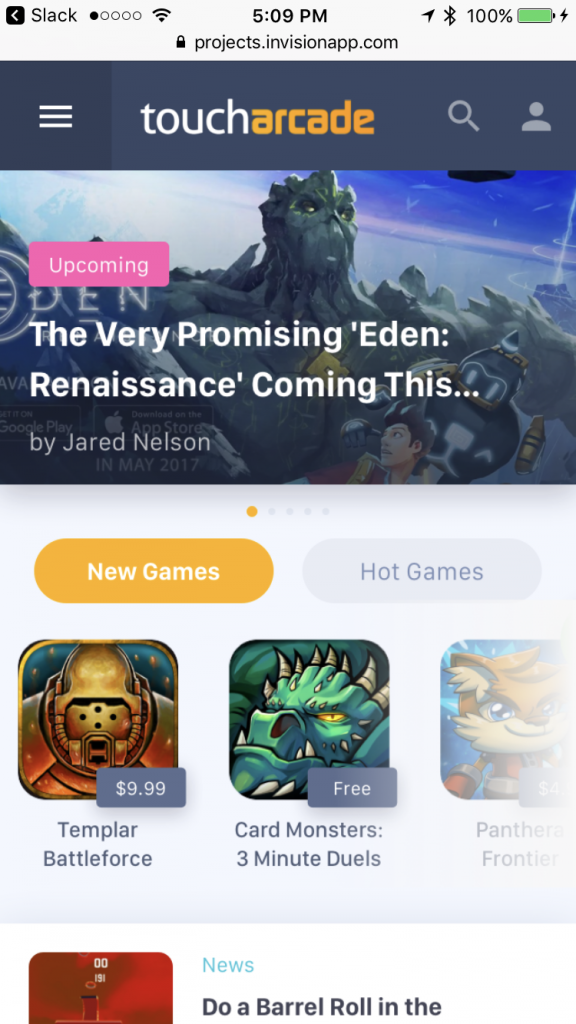 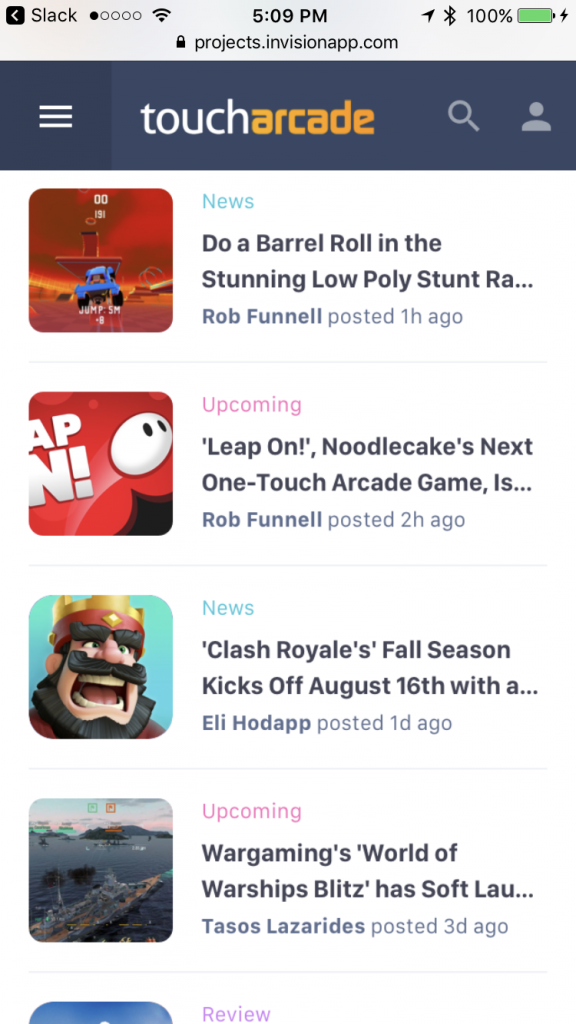 The featured story from the TouchArcade app is transforming into a featured stories block which is a rotating carousel that you can swipe through to see the biggest news stories and reviews of the day. (I think the buzzword for this is “trending" stories.) Below that is the hot games and new games list, which you can toggle by hitting either of the buttons and scrolling that list right and left. One thing we really tried to retain with this new mobile view is the same quick glance feature that the app has, where you could load it up and instantly get a real quick look at the biggest recent story and which new games are worth checking out.

Instead of doing multiple pages like we did with the app, the rest of the functionality is accessed by simply scrolling. One flick of your thumb gets you to the most recent headlines (which we might actually compress vertically a little more to make this information a bit more dense). Another couple scrolls gets you farther down showing the latest games we’ve reviewed as well as recent forum activity: 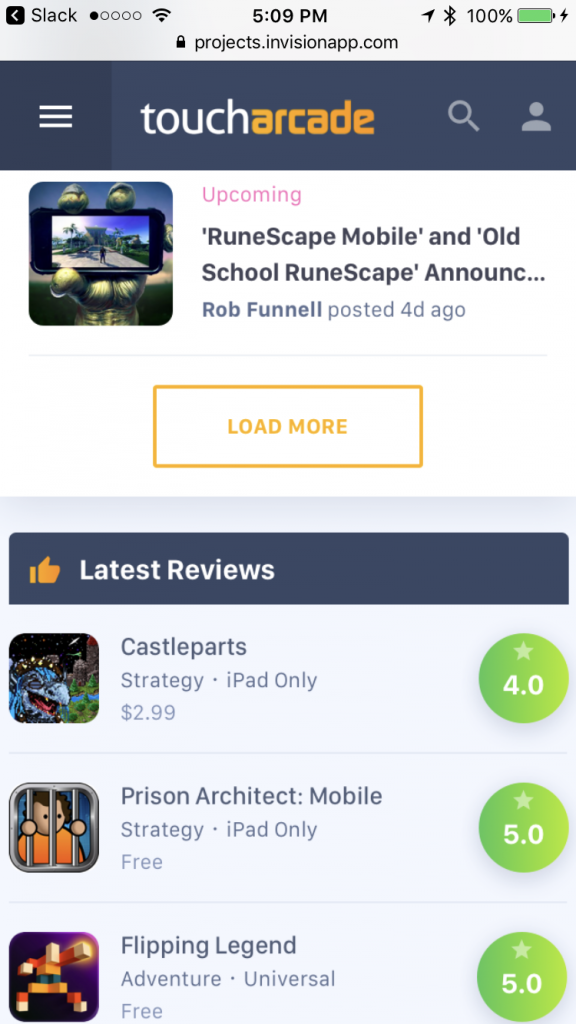 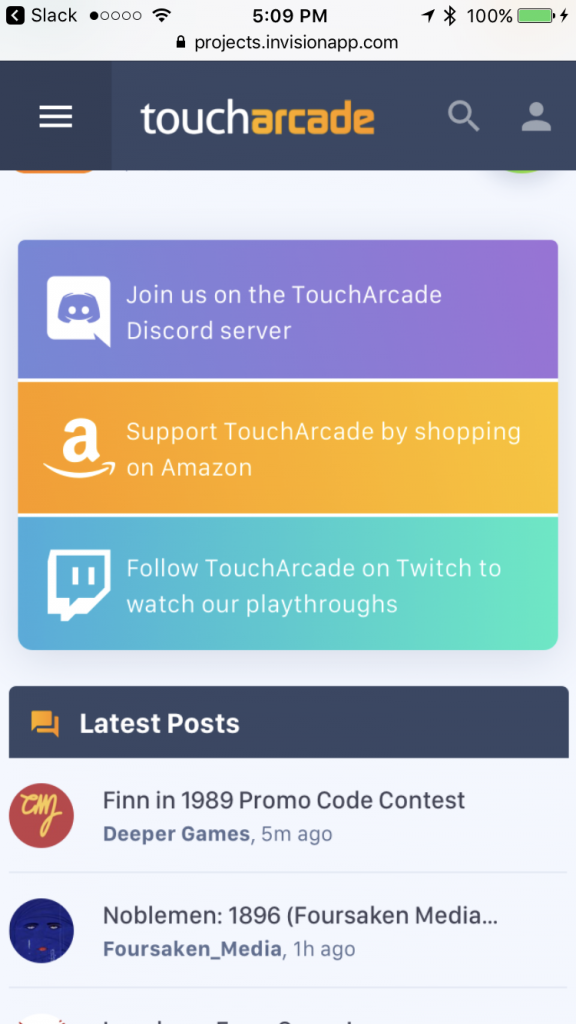 It’s still a work in progress, but I think we’re close to getting to a place that feels like it’s good enough to completely replace the app. As part of this refresh, we’re also moving from our ancient version of Vbulletin to a new community software package called Xenforo. The MacRumors forums switched to this a while ago, and folks have been super happy with it as it’s just forum-y enough for people to still feel like they’re on a forum while having loads of modern conveniences that simply weren’t possible with Vbulletin.

The other benefit walking away from the iOS app is providing us is we’re no longer constrained to doing things that will fit inside of the app itself. The original plan with the launch of the app involved building out the barebones framework of how the app talked to the rest of TouchArcade (and parts of AppShopper). Originally, we were going to continue to enhance this with updates but as those updates got rejected, we were stuck with a very 1.0 version of the API used for the app and web site(s) to communicate. This meant we were super limited with the story types we could publish, and the ways we could format content on the site- Which is why things like the way we embed the Twitch player is so silly. (You may have noticed how practically everything is shoehorned into the “News" heading around here, this is why.) 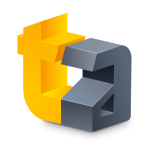 Don’t get me wrong, it sucks that the app is dying, and I’d love to be in some kind of alternate universe where Apple welcomed and embraced things like the TouchArcade app… As all we’ve ever done is worked tirelessly to support iOS as a gaming platform… But, well, that’s not how things played out. I think the path of a way better mobile site makes far more sense for us in the long run. A future TouchArcade app isn’t entirely out of the question either, but if one ever is released, it’ll likely be a simple web view of the site that can serve as an endpoint for our push notification system.

Along with the new mobile site, we’re also updating the desktop (and iPad) version to match. We’re not quite ready to show those off, but everything is in progress. Currently our developers are working on coding the front end of the site, which should take another couple weeks, then it’ll be handed off to us to integrate with our back-end to make it all work. If I’ve learned anything over the years, it’s to never give solid dates for projects that are in progress, but I’m really hopeful that all of this will launch before the end of the year. Originally we wanted the new site to be up before the app died with iOS 11, but I think some of the additions/changes we made to make it even better will make the wait worthwhile.

And finally, none of this would be possible without support from our community on Patreon. It means a lot to us to have been supported by current and previous backers so we can complete projects like this. Independent, third party editorial is super important for the health of any ecosystem, and it’s awesome to have readers that appreciate that even if Apple doesn’t seem to at times. If you’re curious enough about what the desktop and iPad versions of the site look like, back us on Patreon where we often offer sneak peeks before the video podcast each week.