The latest SEGA Forever release is upon us, and like many of the releases so far this one was already released on iOS several years ago before being pulled due to compatibility issues. Space Harrier 2 (Free) is a game of some historical significance as it was one of just two launch titles for the SEGA Genesis’s debut in Japan, but it’s also a firm reminder that the SEGA Forever celebration of the company’s history remains steadily focused on one particular period of it. The emulation is solid enough and it’s a decent game that is well-suited to touch controls, so nostalgic SEGA fans could do a lot worse than throwing a couple of bucks at it. Any appeal beyond that group might be a tough sell, however.

To fully appreciate what Space Harrier 2 is and isn’t, we have to flash back to the launch of the SEGA Genesis. Through the 1980s, SEGA had slowly begun to dominate arcades all over the world thanks to their fun, visually-impressive line-up of pseudo-3D games that relied on sprite-scaling technology. Like many other game publishers of the time, they tried their hand at the home console market. As with just about every other challenger that wasn’t named Nintendo, they didn’t come away with much. In SEGA’s case, they had a lot of popular brands and high-quality games to populate a home system library with, but the hardware simply lacked the power to properly convey the experience of the arcade games. That didn’t stop SEGA from trying, mind you, and they got some impressive results from the relatively weak Master System hardware with ports like Space Harrier, Hang-On, and After Burner. But as well as these ports pushed the tech, they just couldn’t give players the same thrills that the arcade versions did. 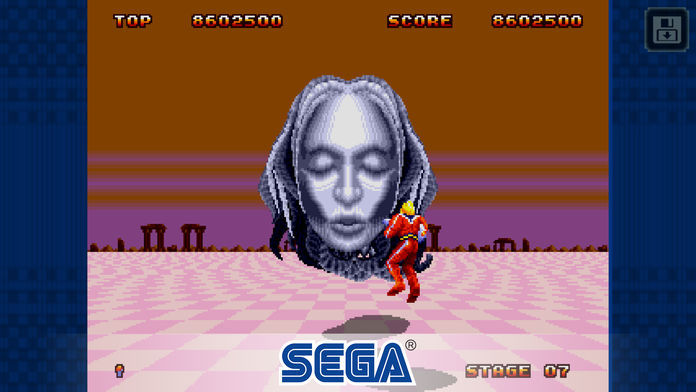 Enter the Genesis, SEGA’s new 16-bit hardware that sold itself on the promise of bringing the arcade experience home in a way no other system ever had. A lofty claim, particularly given the level of arcade games at the time, but one that SEGA would do their best to back up. In Japan, they led the charge with two launch titles that built off of popular arcade properties. Super Thunder Blade was an adaptation of the popular 1987 chopper game, while Space Harrier 2 was billed as the true follow-up to the already-classic 1985 shooter. Both series had seen releases on the Master System, and to say that the Genesis installments blew them away in terms of the quality of their presentation would be a real understatement. This was closer to modern arcades than any other console around in 1988, no doubt about it.

Savvier arcade rats of the time surely spotted what hindsight has shown the rest of us. As impressive as these games were relative to the 8-bit attempts, they were still a far cry from the real thing. Remember when Disney was doing those direct-to-video sequels to their classic animated films? Sure, they were higher quality than the typical direct-to-video fare, but nowhere near the level of the films they were following up on. That’s sort of what happened here. Super Thunder Blade is almost laughable in how much poorer than the arcade game it is, both in terms of presentation and playability. Space Harrier 2 comes off a lot better, but it’s a clear downgrade from the first game in all respects. 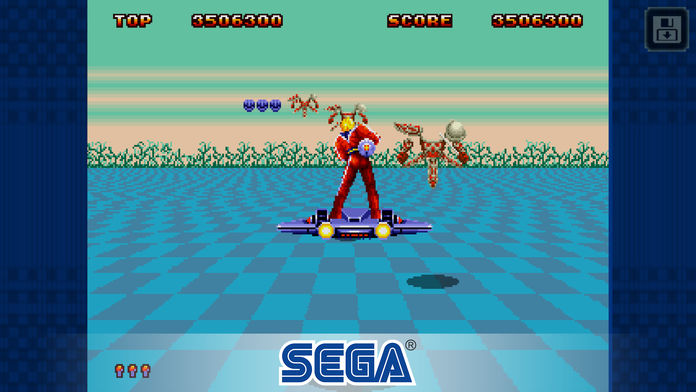 Space Harrier 2 takes us back to the Fantasy Zone for more behind-the-back shooting. Our stalwart Harrier has traded in his Flash Gordon-inspired outfit for a red version of Biff’s 1985 jumpsuit from Back to the Future, but otherwise is more or less at the same things as he was in the first game: flying, shooting, running, and screaming in pain when anything hits him. The adventure consists of 13 stages this time around, 12 of which are regular stages with a boss waiting at the end of each. The 13th stage is a special one, as it challenges you to take on every boss in the game consecutively before facing the true final boss. While you can choose your starting point among the first 12 stages, you can only see that 13th stage if you finish all of them. Oh, and you only get five lives to do it with. It’s a tough challenge, but it can be done.

The default capabilities of the Genesis hardware didn’t include sprite scaling, so the developers had to fake it by making multiple sprites of varying sizes. It works okay, but since neither enemies, obstacles, nor projectiles are moving in the 3D space as smoothly as they do in the arcade original, it can be a little more difficult to track them. The result is that it’s unfortunately a lot easier to smack into an object or fail to get out of the way of a shot. The Harrier still only has one means of attack at his disposal. He can shoot straight ahead, and that’s about it. There are no power-ups or alternate forms of disposing of enemies. It’s a fast-paced shooting gallery through some incredibly trippy locales. This being a sequel, the locations are different and sometimes more interesting than those in the first game. The music is also different, and although it’s pretty good, I wish they had fit the iconic theme from the first game in here somewhere. 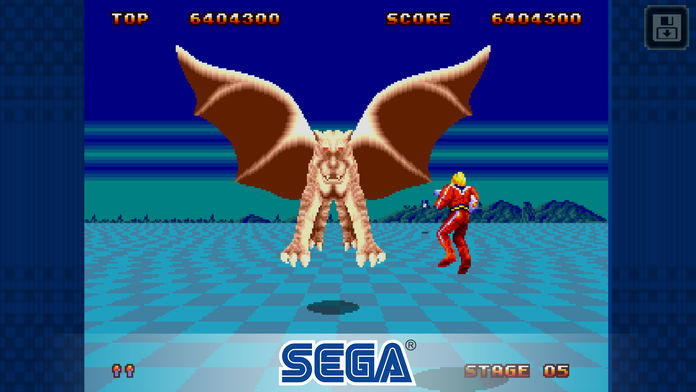 We’ve been up and down the road with the Genesis emulator SEGA is using in the SEGA Forever releases. It’s still not perfect, with the sound being notably off from what it should sound like, but overall it has reached the point where I think it’s good enough. The App tends to lag if you’re downloading anything in the background, but it’s otherwise not too bad on that front. As usual, you can play the game for free if you don’t mind watching ads between stages, or you can pay a one-time price for an IAP to remove the non-SEGA ads, enable added saving options, and allow you to play offline. Either way, you have access to MFi controller support, a couple of different graphical options, and the ability to re-position the virtual controls. Space Harrier 2 gets along really well with touch controls by design. There’s only one button to worry about, and you don’t have to be concerned about hitting precise points on the directional pad since the Harrier can move in every direction anyway.

Space Harrier 2 is an okay shooter, but it’s a Genesis launch title that really feels like one. It’s a good fit for mobile and it’s hard to argue with the price, so I’m glad it has once again been selected as part of the line-up. At the same time, I really would have preferred to see a port of the arcade original Space Harrier. Not just because it’s the better game, but also because it would show that SEGA is serious about expanding SEGA Forever beyond the titles that were already released on mobile ages ago and a few token Genesis games that weren’t. Until SEGA gets around to that stuff, I suppose games like Space Harrier 2 will reliably give you your nostalgic fix, if not much more.