The 32-bit Appocalypse is upon us, friends, and some genres are going to get hit worse than others. By the looks of things, shoot-em-up fans are going to have plenty to be upset about. Just about every fantastic Cave shoot-em-up is headed for the scrap heap, and if the company plans to update them, they haven’t said anything about it. It’s a real loss, not just because they were relatively pricey by App Store standards, but also because they represent some of the finest the bullet hell sub-genre has to offer. You know what, though? I think we’re going to be okay, because as long as there are developers like Doragon Entertainment out there putting out games like Danmaku Unlimited 3 ($4.99), we’re still eating well on iOS. 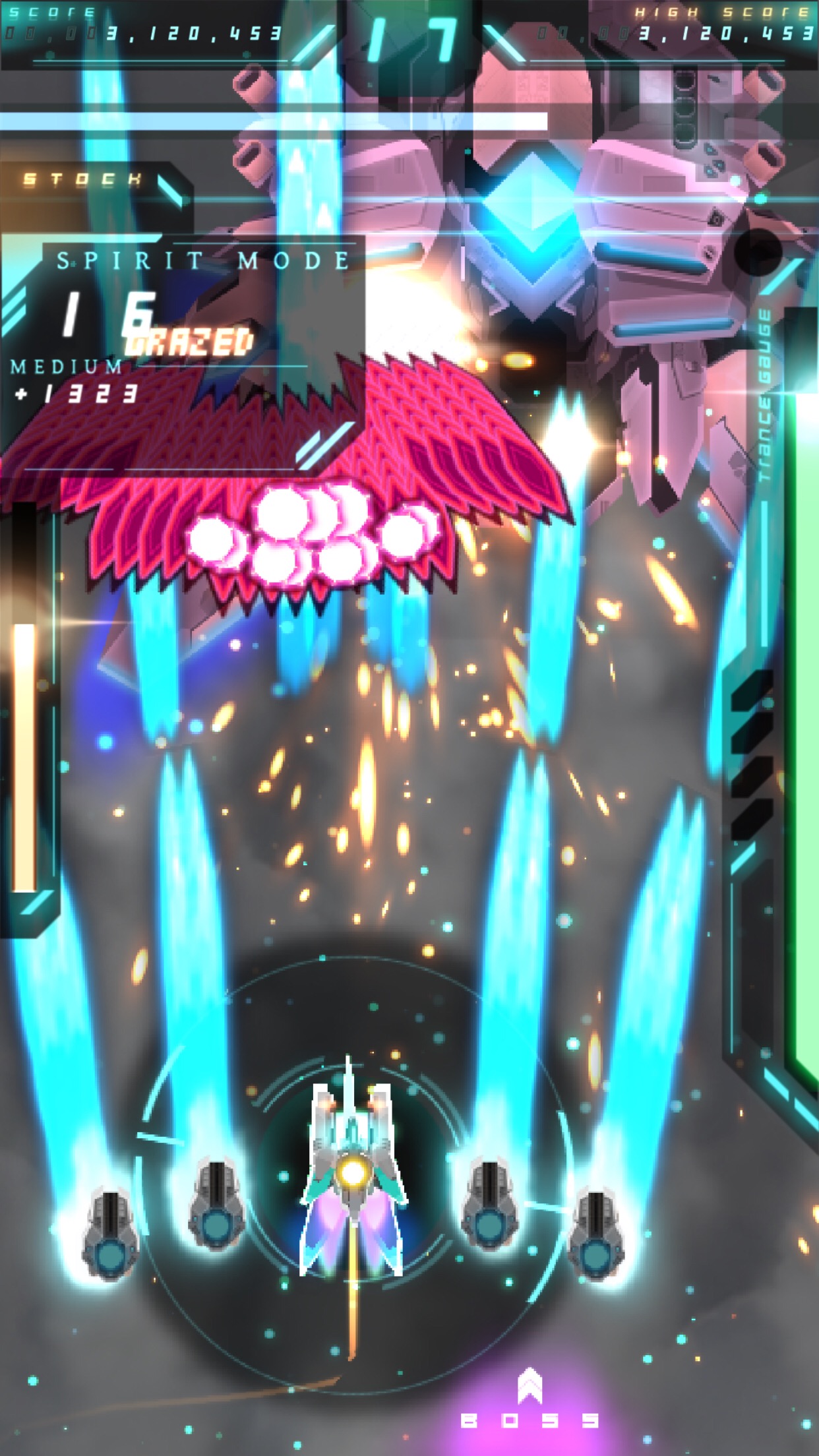 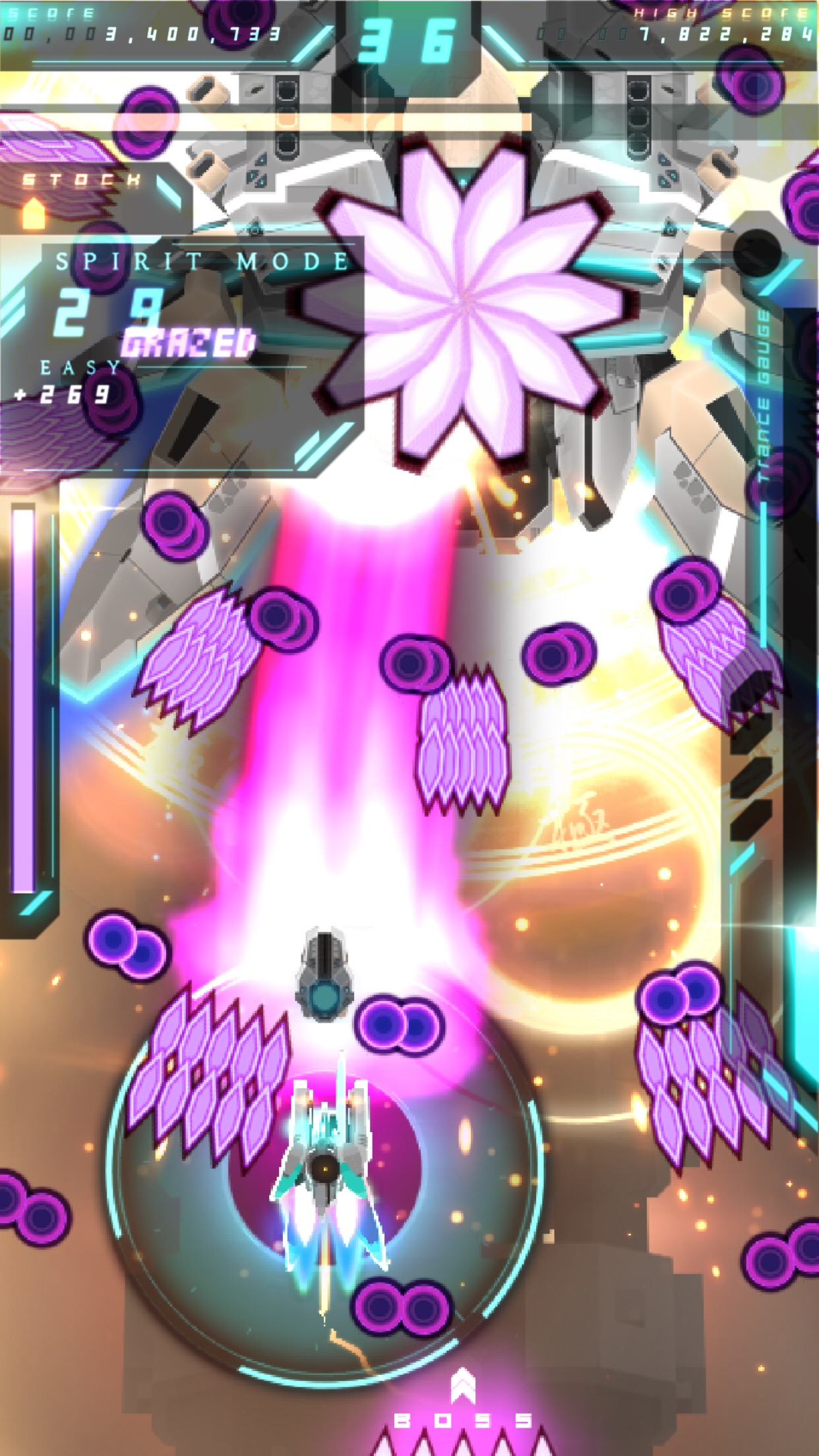 Danmaku Unlimited 3 is the latest in a series that goes back to the May 2011 release of the original Danmaku Unlimited ($1.99). That game was a fun take on the bullet-hell concept, but one that certainly didn’t hide the size of the development team that worked on it. That would be one person, in case you’re wondering. Doragon stepped things up in a big way with the release of Danmaku Unlimited 2 ($4.99) in February of 2013. The presentation looked nearly on par with efforts from much larger, more established developers. The scoring system was more refined, and the game’s rules were very much its own. If the first game was a tribute to the big dogs of the genre, Danmaku Unlimited 2 was was an eye-to-eye challenge. 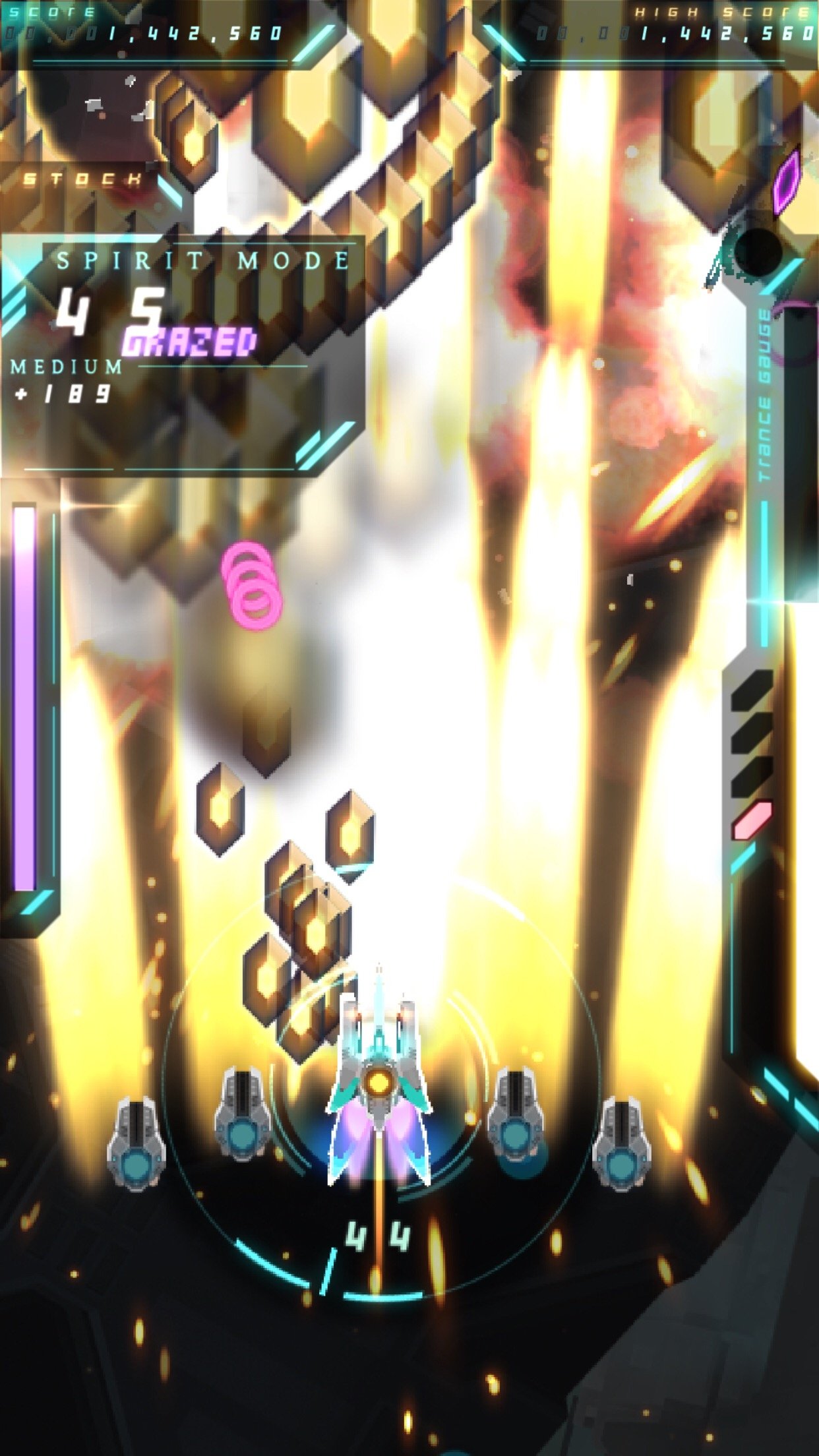 It’s been a few years, and Doragon has spent that time doing other sorts of games. Ideas were clearly percolating, however. Earlier this year, the developer released Danmaku Unlimited 3 on PC, and it demonstrated a whole new level of growth. As is the style recently, mobile fans had to wait a little while for the latest from a once mobile-exclusive developer. Several months later the wait is over, and I can say with all sincerity that it was worth it. This is a game worthy of being held up aside any of the greats of bullet hell shoot-em-ups and is fine bearer of the mobile crown that Cave seems to have abandoned.

The most immediately striking thing about the game is its presentation. Danmaku Unlimited 3 was still largely made by Doragon’s Sunny Tam outside of the music, some sound effects, and testing. Yet somehow, this game looks as good as anything I’ve seen out of larger developers in recent years. The music, once again provided by Japanese composer BLANKFIELD, is incredible. It’s a guitar-heavy soundtrack that gets your blood pumping in seconds. The compositions are more complex and lengthy, making it feel like an amazing guitar rock album is playing underneath your shooting action.

Of course, that’s just the most obvious thing that stands out about the game. Get into the mechanics and you’ll find that while a lot of the required core skills remain the same from the last game, Danmaku 3 is its own beast. Much of the game’s scoring system is once again tied up in grazing enemies and their shots, getting as close to them as you can without taking a fatal hit. This is one of the ways you can charge up the meter for Trance Mode, a state of hyper-destruction that is the key to hitting high scores and surviving some of the game’s tighter spots. In the last game, hitting Trance was pretty much all about grazing, but in this one there is another way to fill up that meter. The bullets of destroyed enemies will turn into harmless light blue energy that you can collect to help you charge your Trance. This gives you an incentive to allow even relatively harmless enemies to unload some shots before you take them out. 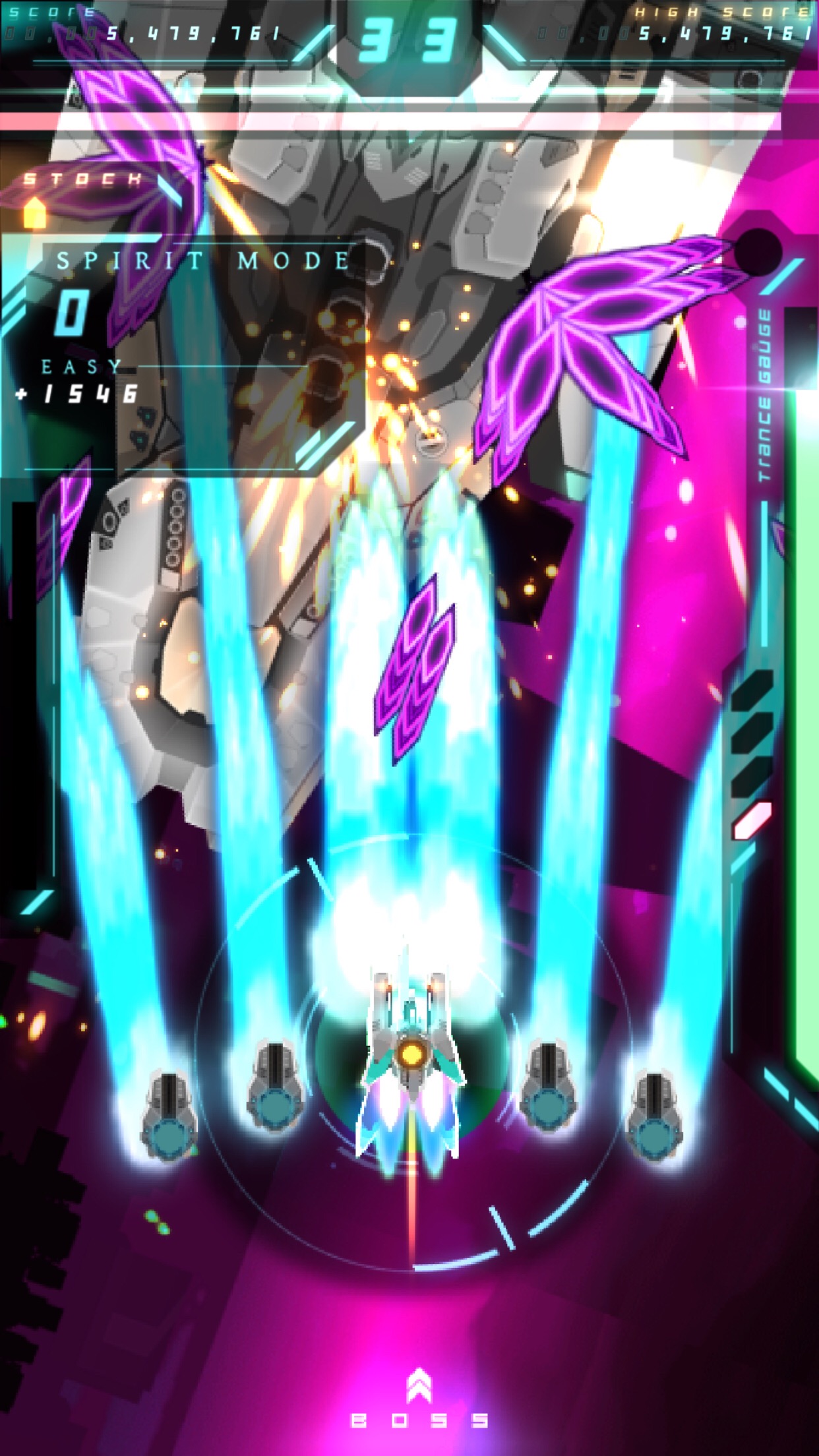 The game includes two modes of play. Spirit Mode is intended for the average player, while Graze Mode is aimed at experts. There are a lot of differences between the two, from subtle things like enemy patterns to more obvious things like the lack of lower difficulty options in Graze Mode. Either way, you’ve got to battle your way through five stages of blistering action to reach the end, and you’ll need to do it on the highest difficulty setting if you want to meet the true final boss. This game is very much meant for expert players, and even Spirit Mode on its easiest difficulty setting will take some practice for the average player to topple. Fortunately, you can unlock various perks that will help you through. Unfortunately, even those perks can be tricky to earn. It’s an easy enough game to play at a basic level, but you won’t get too far with it if you’re not at least somewhat experienced with shoot-em-ups.

Danmaku Unlimited 3 clicks in the same way previous games in the series did. Maximizing your score and getting into Trance as often as possible requires you to play at the knife’s edge as much as you dare. The enemies and their shots are quick and leave little room for you to safely maneuver, and you’re incentivized to shave things as close as you can. Stay close to the bullets so that you can graze them and harvest their energy after you’ve beaten the enemy. Allow the enemy to fill the screen with as many deadly shots as they can muster so that you’ll have more energy to collect when you finish them off. You can switch between a wide shot and a focused beam whenever you like this time around, but even that’s a choice between relative safety and more efficient danger since the narrower, more powerful beam will require you to park closer to the center of your target.

It’s that constant tension, that split-second decision-making between risky and riskier, that makes Danmaku Unlimited 3 so much fun to play. While it’s probably a little too challenging for those who aren’t experienced with bullet hell shooters, fans of the genre are going to be mooning over it like a kitty with a bag of catnip. Add in the fact that it’s Doragon’s best-looking and -sounding game yet, and you’ve got a real genre champion on your hands. This game is no longer imitation nor homage; Danmaku Unlimited 3 is now the mobile bullet hell shoot-em-up to beat. All interested pilots should sign up immediately.