There are quite a few multiplayer first-person shooter games for mobile gamers to experience and (possibly) enjoy. It’s a genre that has consistently evolved over time in order to adapt to the limitations of touch screen controls. Despite those limitations, these games continue to be a mainstay on my mobile devices. One of my favorite first-person shooters on the App Store is Bullet Force (Free) by Lucas Wilde. Lucas Wilde also recently released his newest game, Forward Assault (Free), which I had the pleasure of testing before its release. Forward Assault may look the same as Bullet Force (aesthetically) but it is an entirely different beast. This guide will hopefully help you ease into this competitive first-person shooter by increasing your knowledge of the game, as well as increasing your skill as a player. 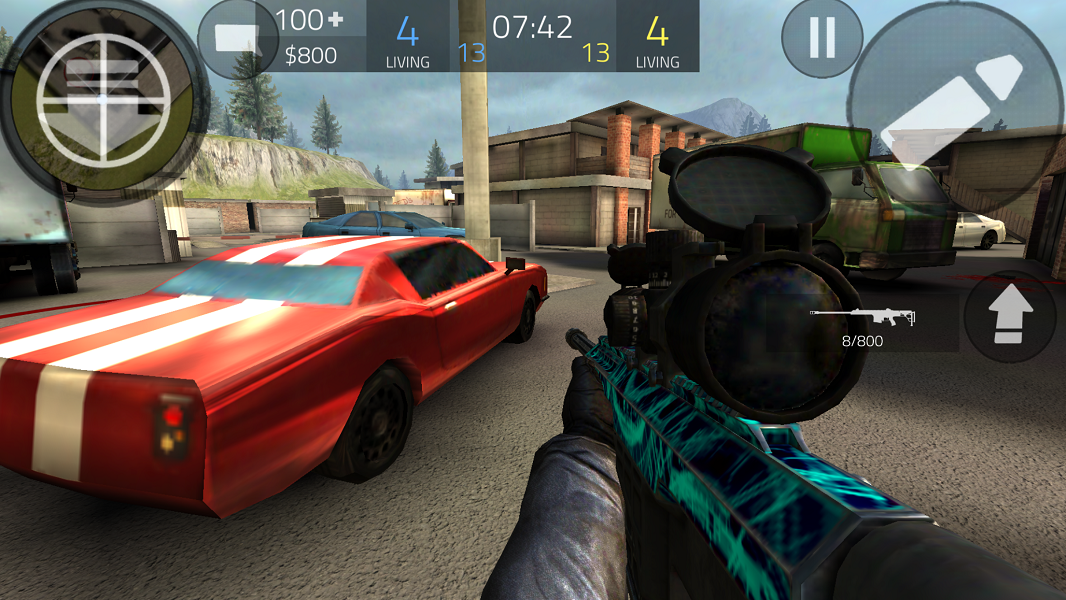 Thoroughly Experiment With Your Control Settings

Luckily, Forward Assault provides deep customization when it comes to its controls. You can alter the size/placement of buttons in any way you desire, as well as increase/decrease the sensitivity of your aim. Unfortunately, you cannot mess around with these settings until you are in a match. I would suggest that you create a game with a password (that only you know) so that no one else can join and interfere with you while you experiment with your personal control settings.

You can utilize multiple button-layouts but it all depends on whether you use the “Claw" method to play. Players who use “Claw" utilize more than 2 fingers at one time to facilitate quicker and more accurate movements. For instance, I use my right index finger to shoot and my left index finger to crouch/aim respectively. This allows my thumbs to remain touching the screen at (almost) all times instead of having to take my thumbs off the the screen to press the crouch, aim, and shoot buttons. This saves me time and helps me remain more accurate. Below is a video of the Youtuber “Beach Banana" demonstrating the claw method of control while using Bullet Force as an example:

Playing with the Claw method comes at an initial cost of discomfort when learning to use it. However, if you persevere through the awkward/uncomfortable beginnings of learning to use Claw, you will greatly benefit from it. I hope this doesn’t make it sound like using the Claw method is absolutely mandatory in order to be good at Forward Assault. I know people who play with just their thumbs and they are more than efficient at kicking butt.

Once you feel comfortable with a specific control scheme, try not to change it very often. You may discover that you want to increase your sensitivity once you become more experienced/accustomed to the game and that is okay. Being able to turn quickly is integral in certain situations, depending on your play style. Just remember that your control options have the greatest long-term impact on your experience with the game. I cannot emphasize this enough.

Crouch and Burst-Fire When Possible

The default accuracy of different weapons vary within the game. You can increase the accuracy of weapons by crouching whenever you want to shoot. You can increase your accuracy further by also burst-firing your weapons. The time to kill of Forward Assault can be quite fast and every bullet counts. That’s why you need to crouch as much as possible and burst-fire to pick off targets from far away.

ALWAYS Aim For the Head

The main way you can make your time to kill even faster is by aiming for the head of every enemy you come across. This does an absolutely ridiculous amount of damage to the point where it’s practically an instant kill when you pull head-shots off. Head-shots are always effective but they are tremendously important while playing the “Bomb Defuse" game mode. You only get one life per round and you have to make it count.

Master the Art of Switching to Your Knife

You are able to move faster while your knife is equipped. Being able to move quickly is crucial in certain situations. I highly recommend that you learn to switch to it at any time. This heavily relies on how comfortable you are with the placement of your button to switch weapons. 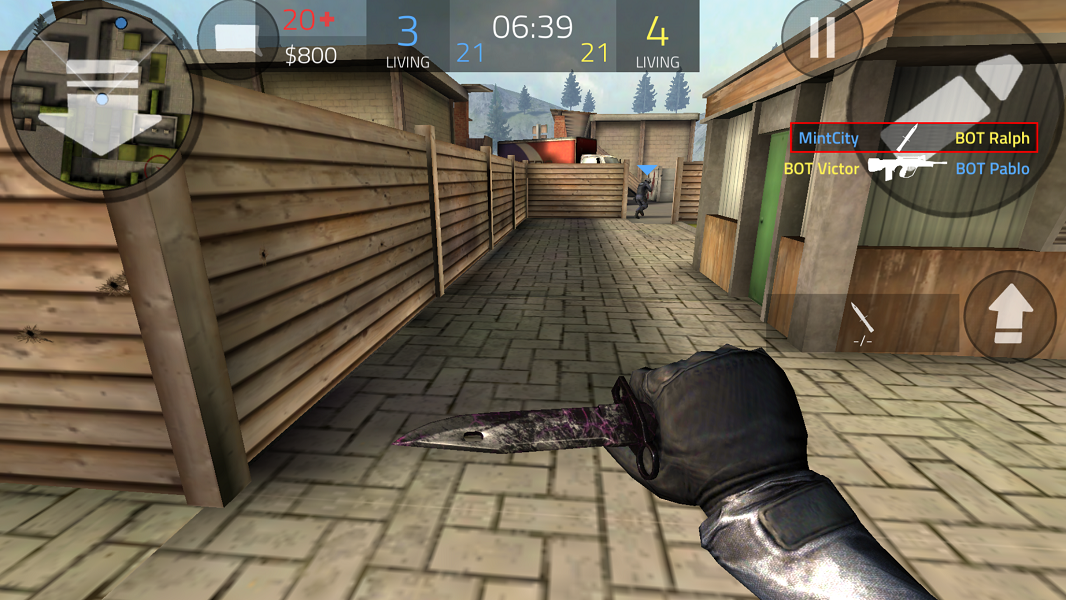 Once you can effortlessly switch to your knife, you need to learn when to switch between your weapons and knife. For example, you don’t want to blindly run around a corner with your knife out. This will leave you almost defenseless against any potential enemies that may be waiting for you. Always switch back to your primary/secondary weapons before going into unknown territories that you can’t see from your initial position.

The best way I can describe the gameplay of Forward Assault is that it is in the similar vein of Counter Strike or Critical Ops (Free). Its movement is a bit more methodical and strategic than other shooters available on mobile devices. These aspects of the game may be new to some players and it could take “noobs" a while to get used to.

I would suggest hopping into some Bot Matches or Team Death Matches to get a feel for the game. These can also provide low-pressure situations that will help you increase your skill and learn the layout of each map within Forward Assault. Knowing the layout of maps and the locations of player spawns are extremely important when playing any multiplayer shooter. Feel free to branch off into the “Bomb Defuse" and ranked game modes once you are consistently comfortable with your gameplay statistics at the end of each of your Bot/Team Death matches.

Believe it or not, you can shoot enemies through thin walls and other various objects throughout each map. This is called a “wall-bang". Wall bangs are especially effective against players who like to camp behind things in the environment. Don’t underestimate the amount of damage wall bangs can do to your enemy. This will help maximize your kill potential. 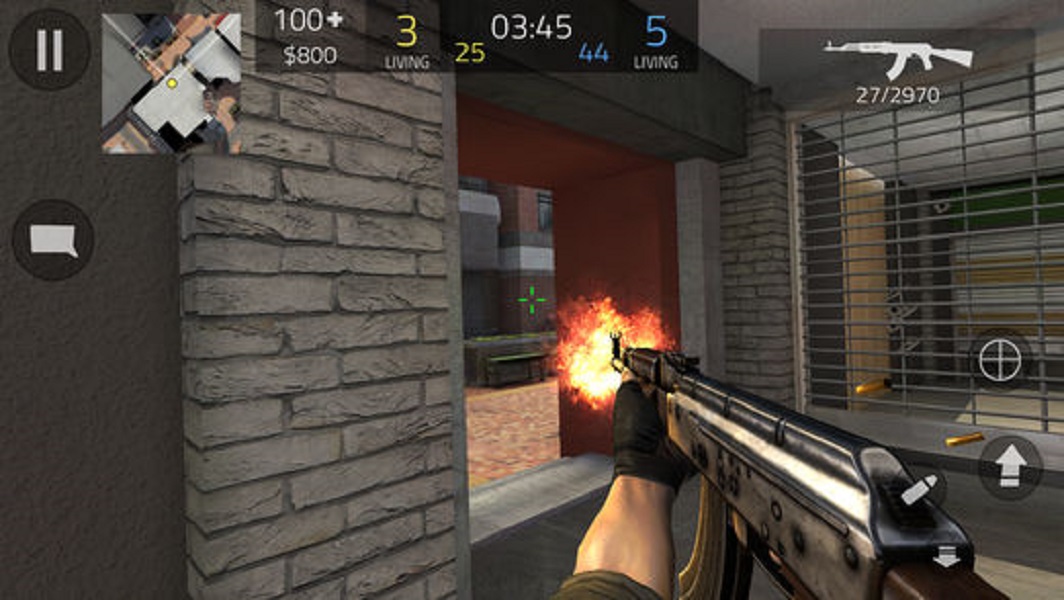 Try Out Different Guns Before You Buy Them

You can purchase new guns with credits that you receive from crates or through IAP’s. Crates are earned at the end of matches and it takes a certain amount of time before a crate can be opened. However, if you buy crates that are available through an IAP, it will open instantly. It’s important to spend your credits wisely.

You can pick up guns (that you don’t have) from fallen enemies/teammates and try them out during a game if you aren’t quite sure which weapon you want to buy. I was regularly surprised with which weapons I gravitated towards using/buying after I took them for a test run. I am sure others will have a similar experience.

Choosing a gun to purchase depends on what your play style is like. Do you like to be up in the face of your enemy? You better grab an SMG or a shotgun. Do you like mid-range encounters while still being able to deal decent damage up close? Go ahead and snag an assault rifle. Do you enjoy picking off enemies from a distance while your team keeps them at bay? If so, feel free to acquire a sniper rifle. 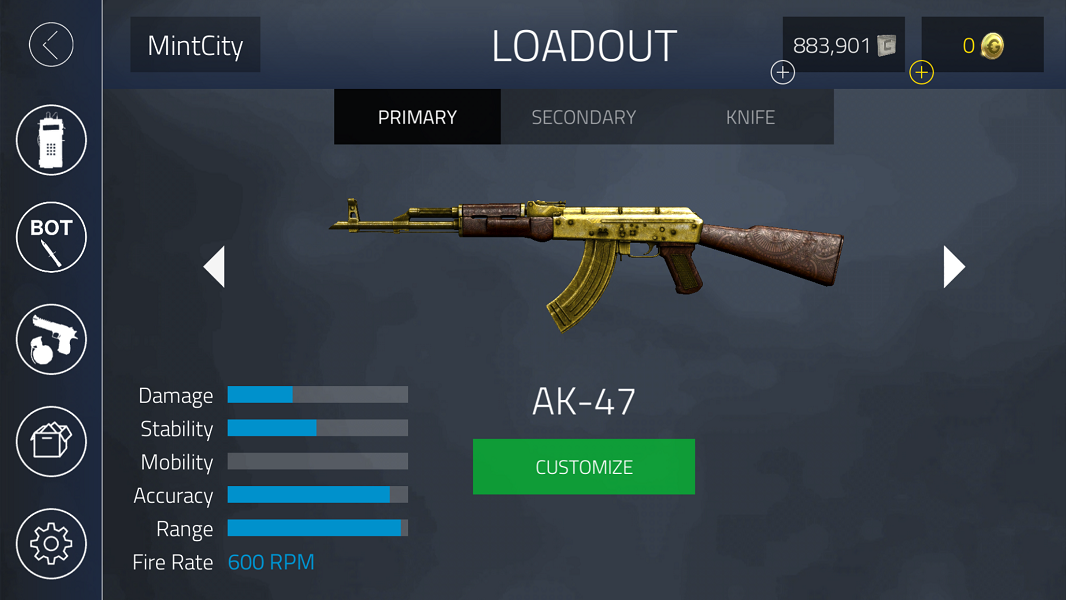 My personal suggestions for the best weapons of each category are:

Login To the Game Often

As mentioned before, the only way you earn in-game currency (without paying money) is through crates that you receive after matches. Always have a timer going on one of your cases and always have a second case ready to start after you open your previous case. Pay close attention to each case’s timer so that you can log into the game and open it as soon as it’s ready. Do not let ready cases sit in your inventory or you are wasting precious time/credits that you could have had. Also, one of the most generous features of Forward Assault is that you obtain weapon skins from these crates. Don’t miss out on opening your crates if you want to earn as much currency as you can, as well as many skins as possible, without paying money. 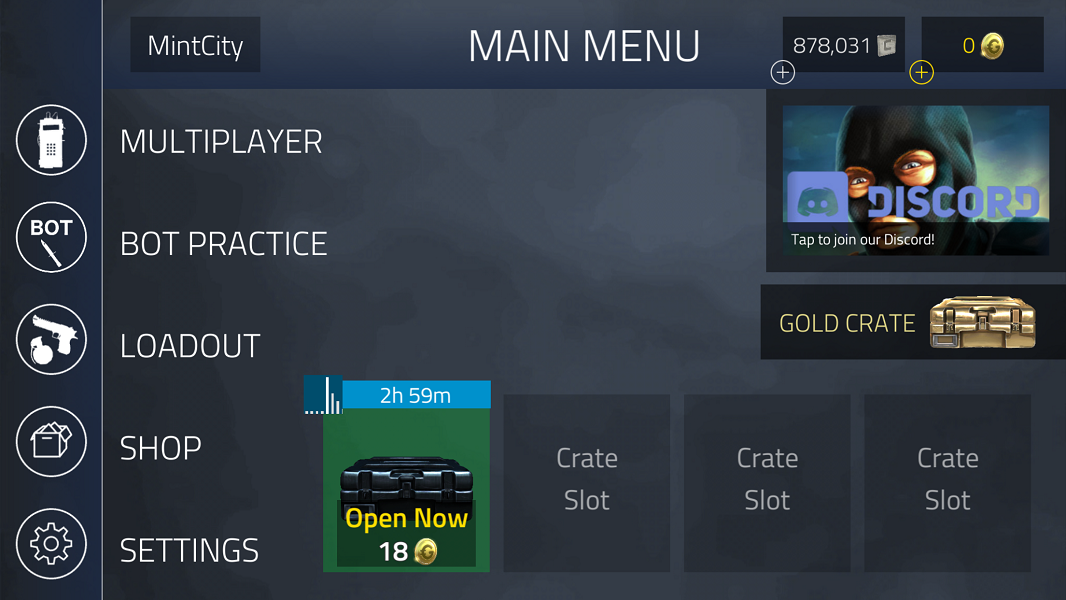 I hope this guide has helped you improve your knowledge of the game, as well as your skill at playing it. Forward Assault can be quite addicting because of its competitive nature. There are always ways you can continue to get better as a player. It’s one of my favorite competitive shooters on the App Store (by far) and I hope that it will become one of your favorites as well. Don’t forget to check out the game’s forum and share tips of your own!