Back in June we posted about a new update to Dumpling Design’s beloved high-score chaser Dashy Crashy (Free) in which they began a new system for allowing people to unlock new vehicles in the game entirely for free and without the reliance on luck through the in-game gacha prize system. That update introduced a Dinosaur vehicle and for the two weeks following the update’s release if you managed to collect enough meat items while playing with the Dinosaur you’d unlock it permanently. If you didn’t earn the Dino during the event, it still remained possible to unlock it by ~secret means~ which are hinted at in game. Then in mid-July, a second event called the Ramper Event started and featured a playable ramp-equipped truck that you could spin around and drive backwards at any time, thus propelling any vehicles in front of you off the ramp and into the air. If you “ramped" enough vehicles you’d unlock the Ramper for free, otherwise much like the dino it would require you to unlock it through secret means.

Well, these events have been very cool and have given me even more reason to play Dashy Crashy on a daily basis, besides the game just being stupidly fun anyway, and the descriptions for both updates hinted that Dumpling had something cool in mind to pay homage to their favorite arcade racers of the ’80s and ’90s that inspired them while making Dashy Crashy. That something cool has arrived and they’re dubbing it the Arcade Season and it has officially kicked off with today’s Dashy Crashy update and the addition of a very bodacious OutRun-inspired vehicle called the Outrunner ’86. When using the Outrunner, crashing won’t end your game but it will slow you down, and in true OutRun fashion you need to reach checkpoints before time runs out to extend your time and take you to a new type of scenery. Unlike the previous Ramper and Dinosaur events, you only have one week to reach 195 sceneries in order to unlock the Outrunner permanently. I typically get between 5 and 10 each time I play so it seems quite doable. 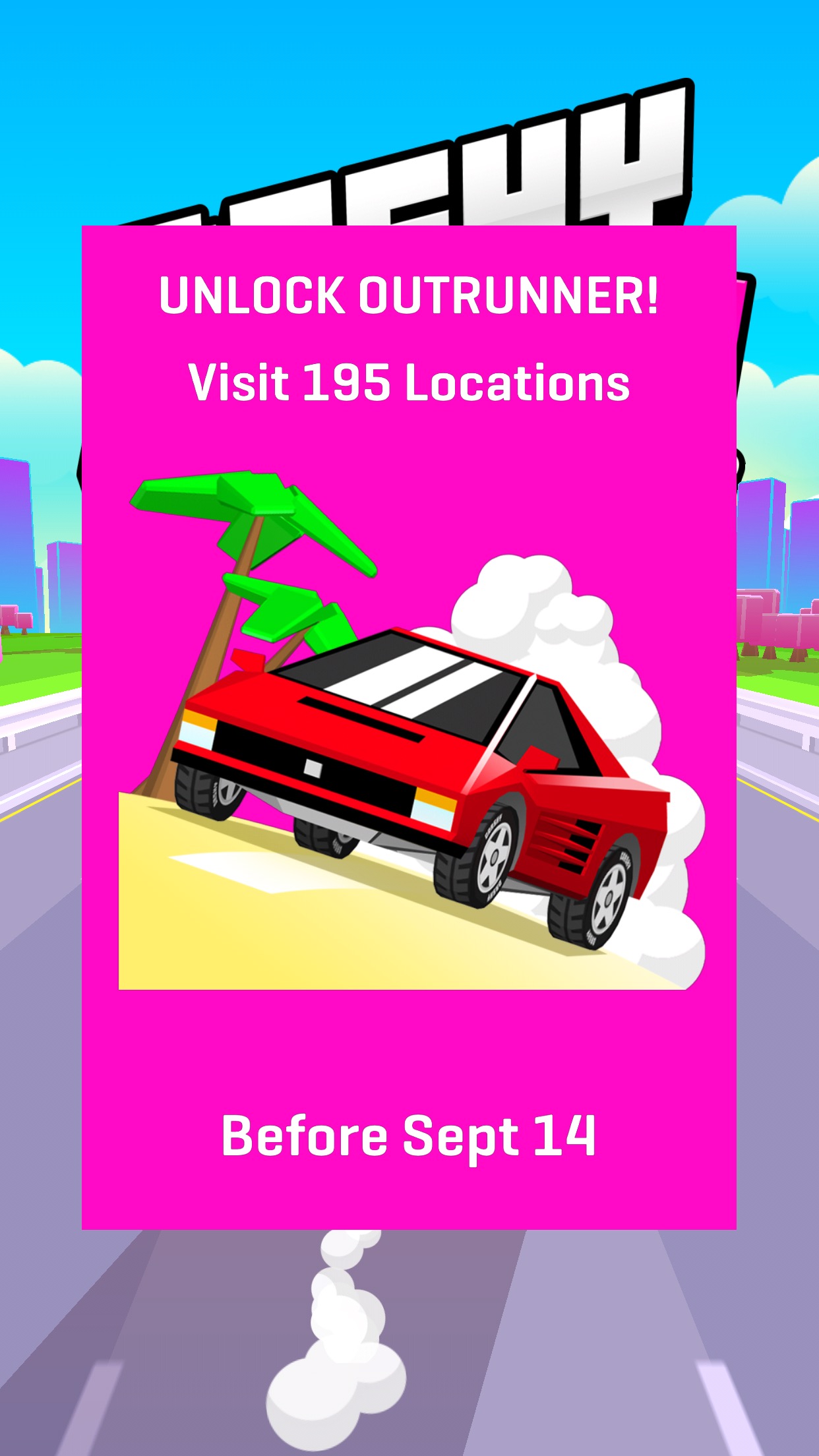 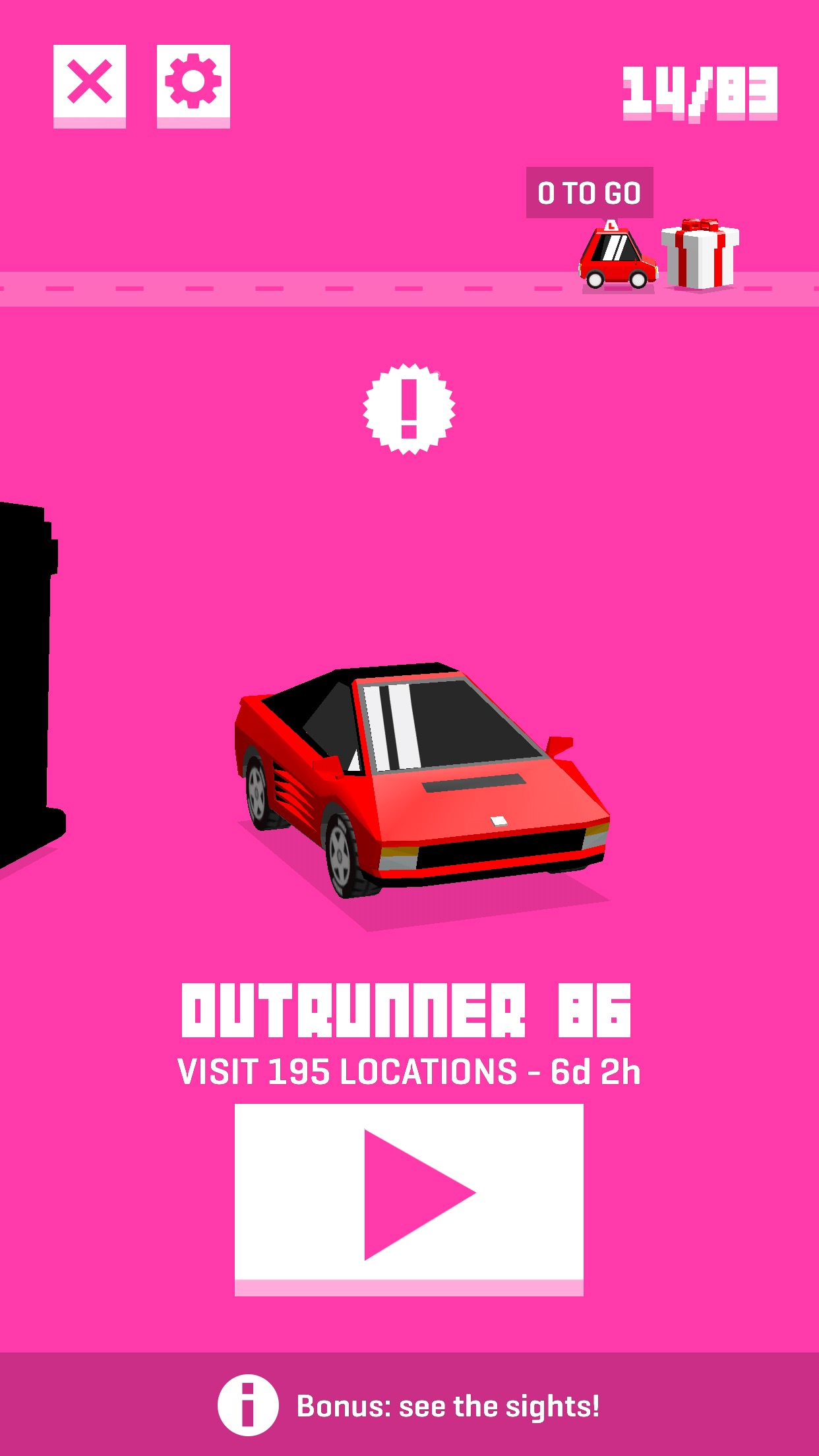 The reason for just the one week to unlock the Outrunner? Well that’s what’s most exciting about this latest Dashy Crashy update, because the Outrunner is just the FIRST new vehicle of the Arcade Season and there are 12 more waiting to be one with new weekly events running throughout the rest of September and through October. Dumpling has left some shadowy hints in the game’s forum thread as to what the other vehicles will be, and I can safely say I recognize at least one F-Zero vehicle in the bunch and… maybe even the Arwing from Star Fox? It’ll be fun to find out! If Dashy Crashy is new to you, be sure to read our original review and our Game of the Week nod, and then supplement that with our write up on the huge version 2.0 Turbo update, as it was a major game changer. Or just save yourself some time and download the sucker seeing as it’s free and has one of the most unobtrusive pay models I’ve ever seen. If you love over-the-top arcade aesthetics and risk/reward high-scoring gameplay, Dashy Crashy is a total winner, and the new Arcade Season is just the latest of many reasons to give this gem a permanent home on your device.