With games such as forma.8 GO ($4.99), Hollow Knight and the upcoming Metroid: Samus Returns on 3DS dominating headlines, 2017 really is the Year of the Metroidvania. Personally, I can’t get enough of the wondrous exploring and clever progression of titles in the genre, and even though I end up holding any game that takes the Metroidvania label to the extremely high standards of classics like Castlevania: Symphony of the Night, such releases always scratch a particular gaming itch for me. It was therefore a particularly nice surprise to see Hero and Castle ($0.99) appear out of nowhere on the TouchArcade forums this morning, despite having released earlier in August – with over 80 rooms to explore of a beautiful fortress full of stained glass murals, IndieSky Technology’s latest iOS release looks to be yet another strong exploration title for mobile, and for only $0.99 with no in-app purchases is certainly worth a look. 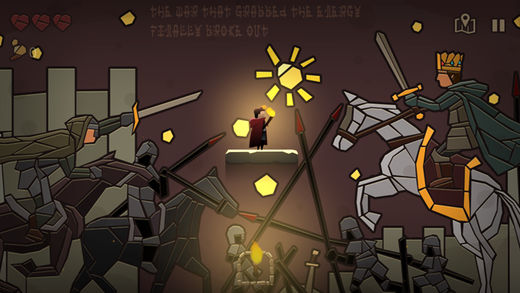 Interestingly enough, and following the trend of many recent releases such as Rime on consoles, Hero and Castle (not to be confused with the excellent Heroes and Castles series by Foursaken Media) doesn’t feature any combat – only nefarious traps and platforming challenges prevent you from lighting up all the rooms in the game. Those wanting a difficult and frenetic action adventure experience may want to look elsewhere, however this focus on exploration combined with the wonderful aesthetic design of Hero and Castle puts the emphasis on atmosphere to the very forefront of the game. Early impressions from forum veteran Anotherkellydown underline the strength of the game’s visual style and sense of progression, and although it may not be a terribly long title, ‘for a dollar [he] found it totally worthy of some attention’. Surprise indie releases really epitomise the most positive aspects of the App Store, so do give Hero and Castle a look, and join in the discussion on our forum thread.