Handelabra Games, known for their digital adaptation of the cooperative tabletop card game Sentinels of the Multiverse ($6.99), has a brand-new offering in the App Store. This time they’ve tackled the dice-rolling baseball game Bottom of the 9th ($0.99), yet another tabletop to digital transformation. As the name suggests, Bottom of the 9th focuses on the pivotal final half inning of a tied ball game. The scrappy, overachieving home team is surprised to find themselves on the doorstep of victory against the powerhouse visitors and are hoping to pull out a win by scoring a run. They know they had better do it in this half inning because they lack the steam to hang with the big boys in extra innings and would most certainly lose. It’s baseball distilled to its central idea—the duel between pitcher and batter.

This matchup is captured well in the mechanics of the game and each pitch starts with a bit of gamesmanship, known as the stare down. The pitcher chooses where to place the ball based on quadrants separated on two axis: high or low and inside and away. The batter tries to predict which quadrant the pitcher will choose. There are two bonuses up for grabs based on the success of this mind game before each pitch. If the pitcher completely fools the batter and goes high and inside versus a prediction of low and away they win both bonuses. If the batter nails the location of the pitch the bonuses go to them instead. If they split, each player gets one bonus. 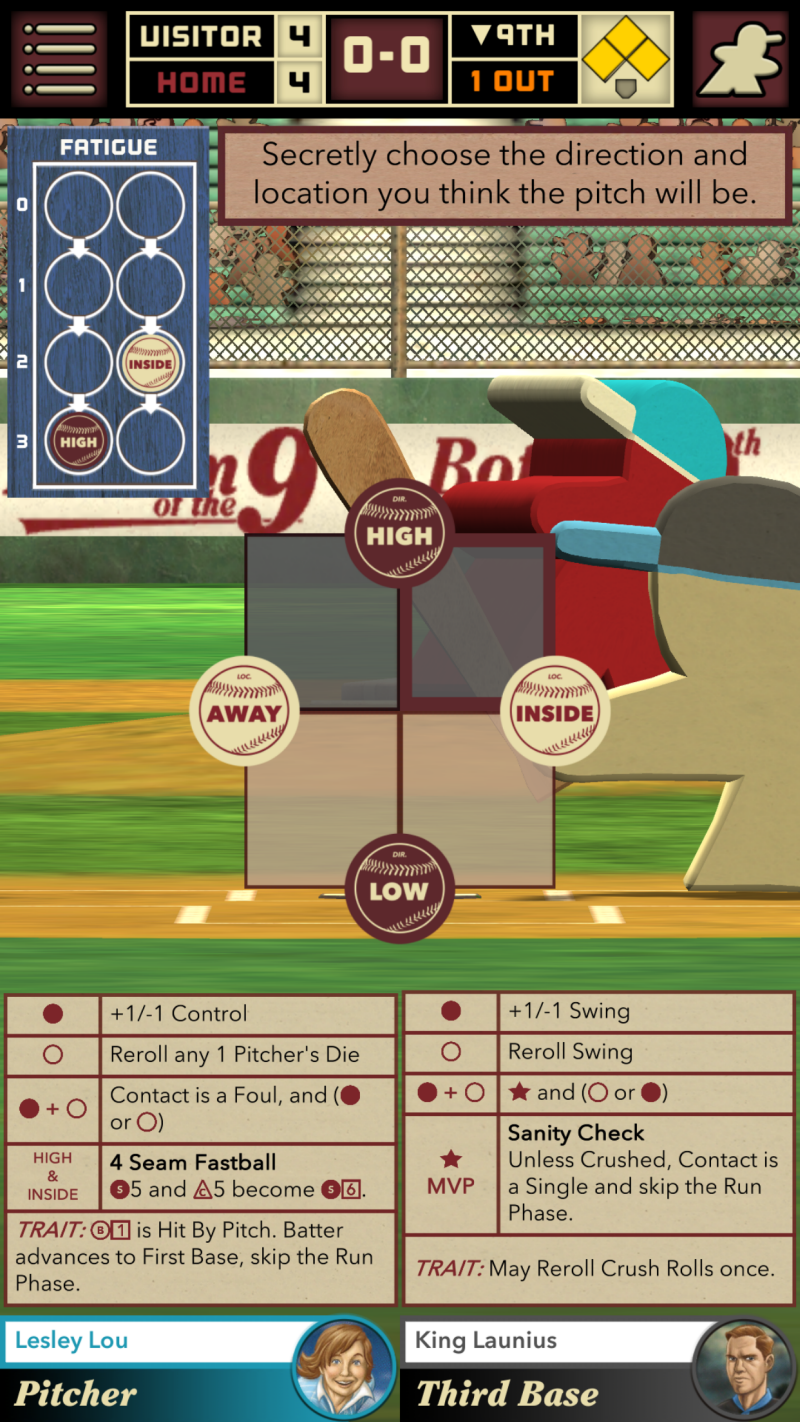 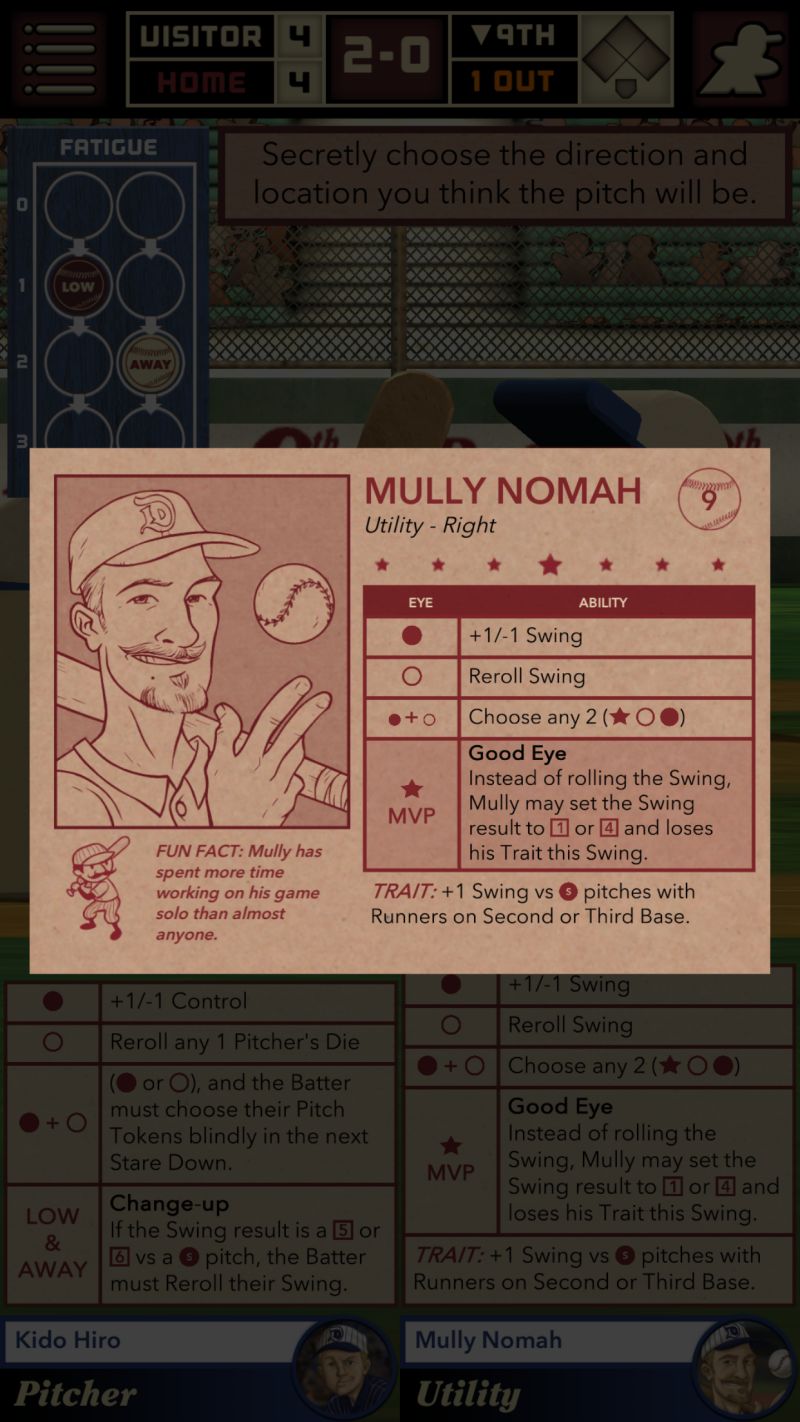 Once the stare down is settled the pitcher rolls two dice. One die determines the location—ball (out of the strike zone), strike, or a pitch that paints the corner. The other die is a regular old numeric one ranging from one to six dots. A low number with a ball is good, as is a high number for a strike. The batter then rolls one numeric swing die. If the pitch is a ball they need a number lower than the pitcher’s. If it is a strike it must be higher to make contact. These rolls are modified by the two bonuses. The winner of the high/low bonus gets a +1/-1 to either their pitch or swing. The winner of the inside/away bonus gets to reroll a die. Winning both also opens special “MVP" abilities that can be used either instead of or in addition to the other bonuses.

Players all have these special abilities and other traits that add a lot of compelling gameplay to Bottom of the 9th, especially when it comes to the batting order. Certain players really shine at certain spots and you can set yourself up for success with a good strategy regarding your lineup. Mully Nomah is my favorite batter, for example, because of his “good eye" ability, which can be triggered when you win both bonuses on a pitch. His good eye allows him to choose a 1 or a 4 on the numbered die rather than rolling. This is a particularly powerful ability as you choose to use it upon seeing the pitch. If it’s a ball you can choose 1 and move up in the strike count, or secure a walk on ball four. If the pitch is a strike but not a 5 or 6, you can choose the 4 to make contact or at worst foul it off. This ability really helps Nomah get on base, which is great for a lead-off batter or to advance base runners a bit later in the inning.

The other abilities also deepen the game strategically. K.C. Petty can take a pitch, for example, and not swing which is helpful if you think a ball is on its way. Anvil McIver can really crush the ball and has a shot at a home run on a 5 or 6 roll. King Launius can use his MVP ability to get an automatic single on contact with no run phase, where you roll off against the pitching team to see if a player will be safe or out.

Given dice are involved in the game there’s a high level of luck built into Bottom of the 9th. This isn’t a bad thing. Most games involve luck and with good reason, it keeps things interesting and variable. You will get some bad rolls, often several in a row, which isn’t a lot of fun and will cost you some games. On the flip side of the coin, or die, are the times where you go on a run of favorable rolls and pull off an exciting victory. You get both highs and lows in Bottom of the 9th, which is a lot like baseball itself, but may turn off some players.

Bottom of the 9th offers a few different ways to play. You can play locally against a friend or an easy, medium, or hard computer opponent. The AI is quite good and far from a pushover. You can also play online in either a casual or ranked game. Want to play a friend? You can do that as well by sending a link for a pick-up game. Your friend needs the same version of the game and you’ll have to stay connected while waiting for them to join.

Overall, Bottom of the 9th is a very well designed and enjoyable game that does an excellent job capturing the strategy and fun of baseball. Games are quick, unlike baseball itself, and can be very short indeed if the home team scores early. Fans of the sport will certainly enjoy this one, as will competitive gamers of any stripe. Check it out and make sure to visit our forums for more on the game.