I kind of feel bad for the developers of Glyph Quest, We Heart Dragons. They’ve got a sound concept for their puzzle/RPG hybrid series, one with a satisfying amount of depth that nevertheless manages to be quite straightforward. The problem seems to be in finding the right balance of elements that allows them to make some money with the idea. After trying two player-friendly models and not getting great results, I guess I can’t blame them for veering things hard in the free-to-play monetization direction. That’s a tricky road to walk, however, and Glyph Quest Chronicles (Free) can’t quite keep itself from stumbling into the ditch now and then. 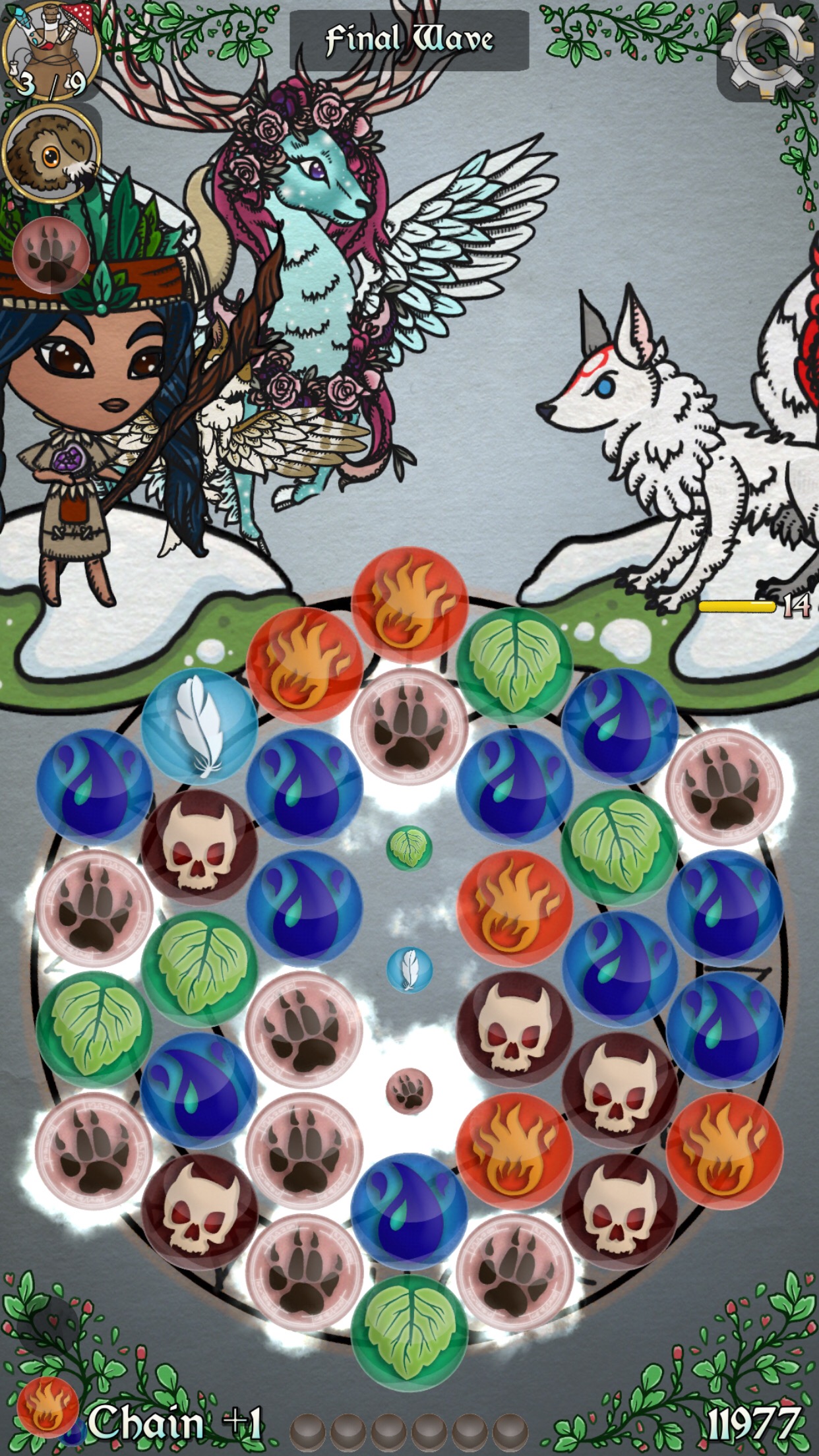 The first game, Glyph Quest (Free), used a shareware-style model, allowing you to download the initial game for free and asking you to pay to unlock the rest of it past a certain level. There was a time when this kind of model was quite successful in the App Store, but its popularity had peaked well before Glyph Quest released. Worse, the actual interesting twists of the gameplay were fixed to levels beyond the free portion on offer, meaning that the game didn’t sell itself as effectively as it should have. We Heart Dragons decided to listen to the feedback from the hardcore fans of the first game when they were deciding on a monetization model for the follow-up, Super Glyph Quest ($3.99). They opted to make it a full paid title upfront, which is another genuine uphill climb on mobile platforms, particularly for a puzzle game. Little surprise then that it also didn’t catch on.

The gloves have come off with Glyph Quest Chronicles, though the balled fists underneath are still wearing woolly mittens. We’ve got a premium currency that is used to upgrade spells or shortcut equipment upgrades. Every attempted stage requires some stamina, which can only be topped off by waiting out a timer, watching an ad, or paying some real money. The difficulty certainly feels tilted towards requiring the player to grind for experience, gold, or materials. Even without that, the stamina meter is small enough that you often can’t get through a whole set of stages without running out. The Glyph Quest games have always had some issues with their difficulty curve, but this is the first time where you can open your wallet to get around that. 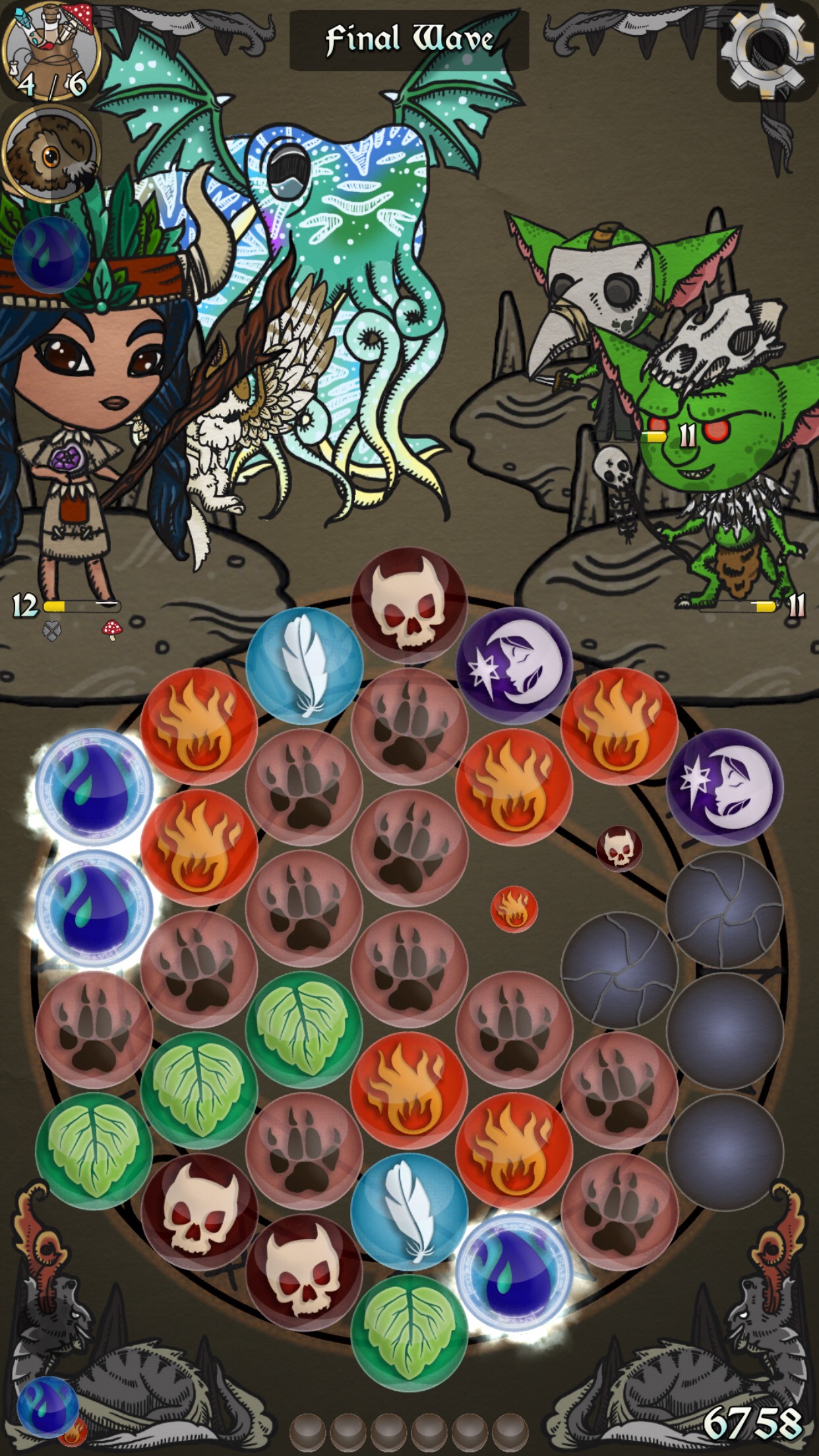 But what of those mittens, then? By default, the game includes a mechanic called a loyalty card. Each time you clear a stage, you get a stamp on the card. When you fill its eight spaces up, you get a little premium currency and a partial restore to your stamina meter. Replaying previously-cleared stages still earns you a stamp, and there’s no limit to the number of times you can hand in your card. You definitely won’t fill the card in one sitting by default, but every couple of sessions or so, you’ll get to take an extra try and spend a few gems. The game also sells a few useful permanent upgrades. One such IAP doubles your gold intake, which essentially ensures you will have fair earnings without much of a need to grind. Another IAP gives you a new loyalty card that only takes six stamps, letting you earn gems and partial stamina refills that much sooner. The game even sells you a handy bundle that includes both of these IAPs for $5.99.

I suppose the problem with that is that even with that better loyalty card, you still can’t play continuously. You’ll get an extra try every now and then, but you will most assuredly run out of stamina often. Watching ads is an acceptable deal for a refill, but it does feel a little odd to have to do that when you’ve already plunked down more money than either of the first two games cost in their entirety. If you want to completely escape the stamina restrictions, you’ll need to pay for Patron Mode. By spending $19.99 in total, Patron Mode will be activated and the stamina system will be completely disabled. You can do that immediately with a single IAP, or by cumulative purchases of other IAPs. That latter bit is quite friendly, but I’d be lying if I said I didn’t feel the price was a touch high. Nevertheless, the option is there, and that’s not something many developers of free-to-play games bother to include. 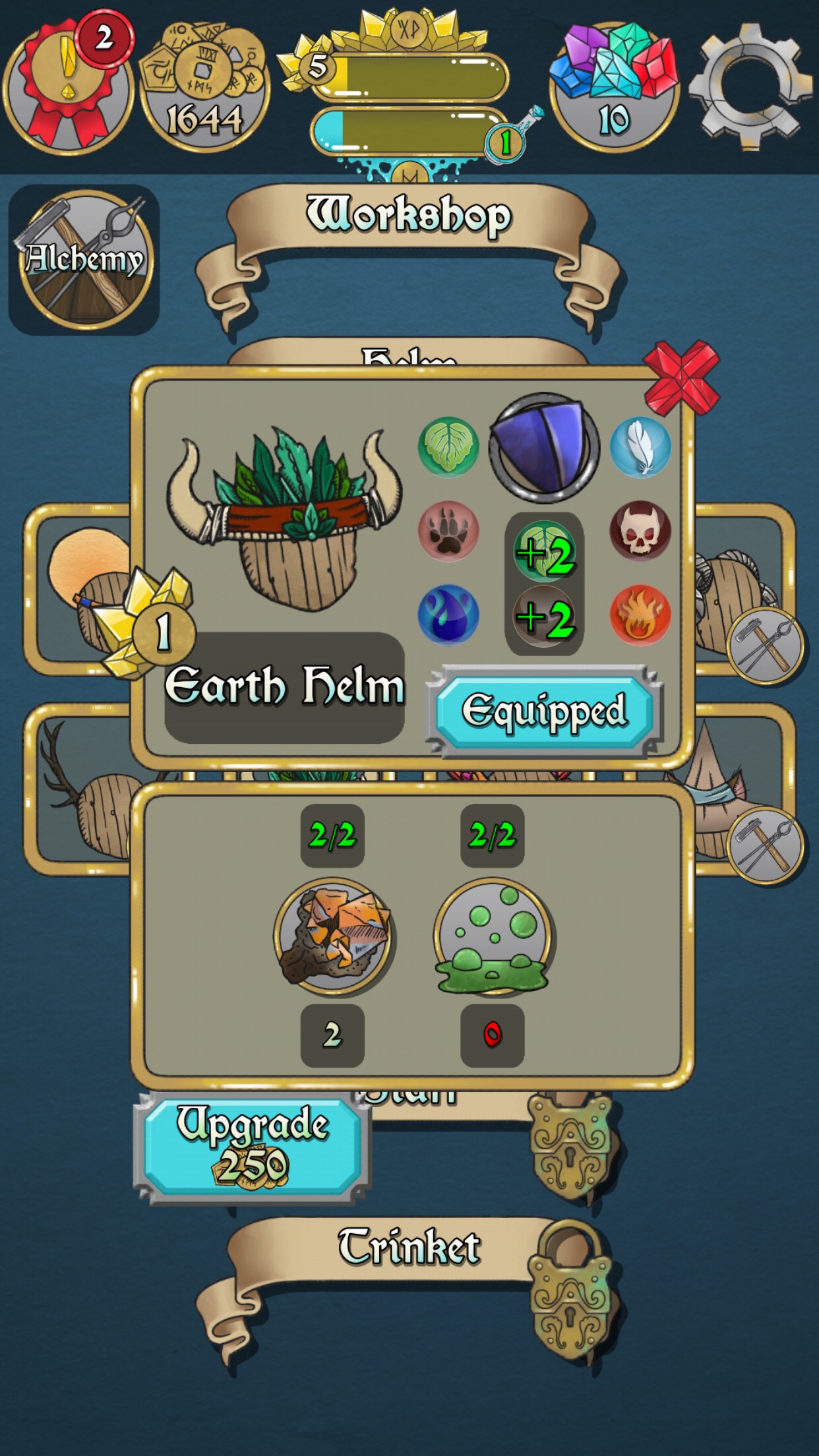 I kind of hate that I’m five paragraphs into a review of a pretty fun game and all I’ve talked about so far is its monetization system. It really does color the entire experience of Glyph Quest Chronicles, though. The difficulty spikes feel more suspect. The in-game encouragement to buy items, upgrade gear, and power-up spells comes off more like a series of never-ending sales pitches as opposed to genuine advice. The fact that some critical upgrade materials are somewhat rare drops isn’t something I’m totally keen on at the best of times, but when the game allows you to pay your way past needing those materials, even I can’t help my imagination from wandering. Let me be clear that I don’t think free-to-play monetization is necessarily a bad thing. It can work, but there are just so many ways it doesn’t here.

The core gameplay is still as solid as ever. By matching numbers and combinations of different glyphs, you’ll cast a wide variety of spells to attack your enemy, heal your wounds, or throw out some buffs. While you start the game only being able to make small matches, you’ll grow in power considerably before too long. That opens up larger potential chains as well as special combination spells. You’ll eventually be able to summon powerful spirits who beef up your spells and are able to unleash a devastating attack before taking their leave. The game has some advanced techniques such as chaining and reversing for more damage, and if you pay careful attention you can even somewhat manipulate which colors of pieces appear on the board after you make a match. It’s a lot of fun, and although there aren’t any big changes to the formula this time around, a few new objectives and additions go a long way for the veteran player. 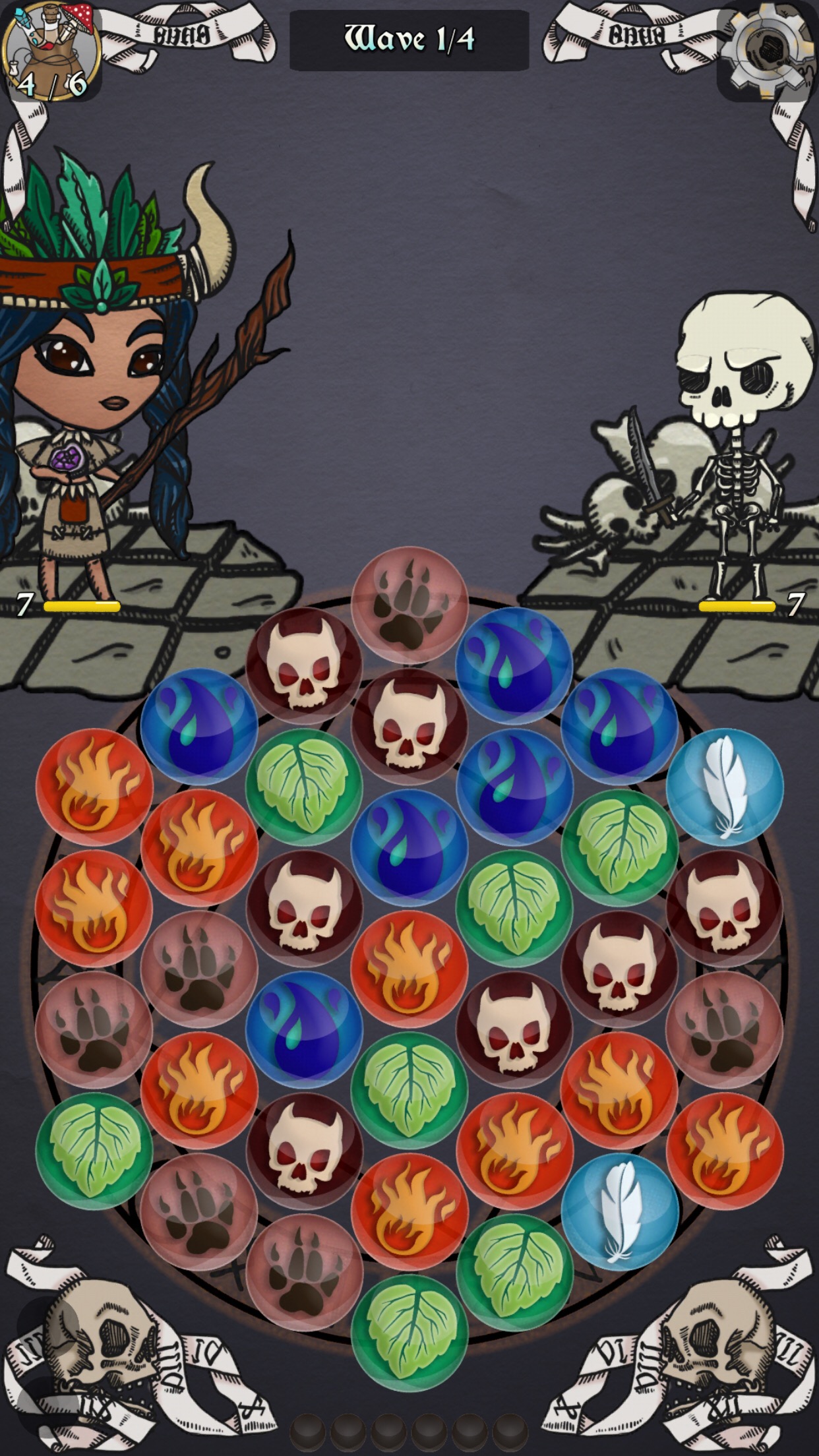 Your base of operations is a town with a number of different locations to tap on. There are pets to buy, various kinds of gear to forge, items to stockpile, and even upgrades for each individual spell. You can also check out the often-humorous descriptions of any monsters you’ve battled or spells you’ve used. Rather irritatingly, if you haven’t used a particular shop for a while, the game likes to hassle you to do so almost every time you duck your head into the town. This is probably fine in the early going when players need some guidance, but it never ends. Glyph Quest Chronicles likes to talk to the player, and it does so almost excessively. In combination with the new-found monetization, it comes off not so much as help as it does a series of desperate pleas. This time around, all of your quests are loaded up in a single menu. Rather than deal with NPCs, this works more like a checklist of achievements. Finish one off and you’ll earn some gems.

The stages themselves are more straightforward this time around too, albeit with a couple of extra twists to make things livelier. You’re working your way through a linear progression of levels, each one consisting of a number of fights against monsters. Some stages add a timer to apply some added pressure, while others decrease the number of fights by having the baddies pile up on you. You’ll frequently have to face off against powerful boss-style enemies, but don’t be too surprised to see many of them crop up again as regular foes later. As in the previous games, there’s a certain element of luck involved in your starting board layout, but once you figure out a couple of strategies, you can start manipulating how and where certain pieces appear. 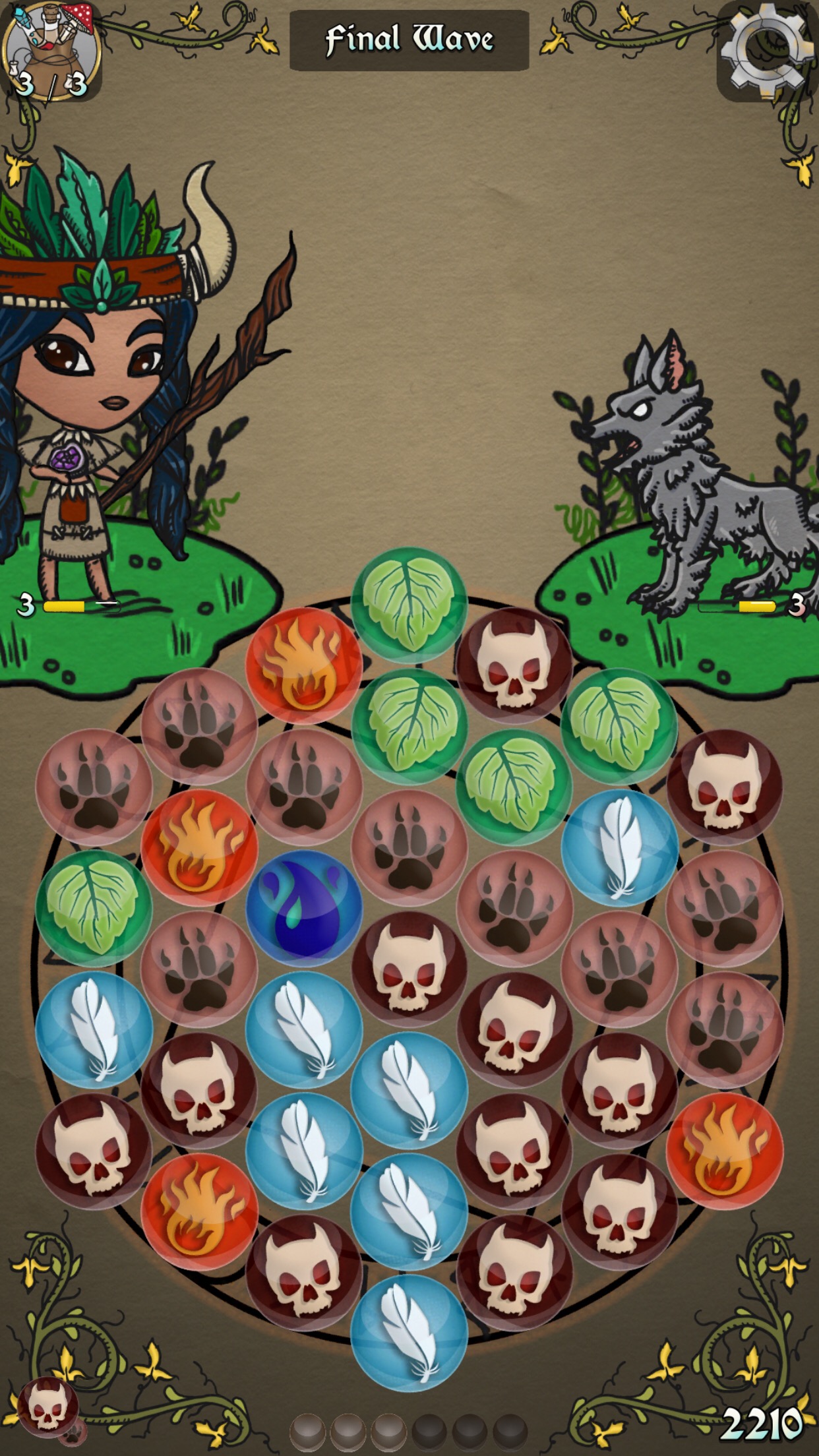 Unfortunately, another similarity it shares with the previous games is the uneven difficulty. You’re going to hit difficulty spikes now and again, and that’s even assuming you know all of the little tricks to maximizing damage. The game’s bandage for this appears to be encouraging the player to buy and quaff health potions. That’s also not new, but it has never really sat right with me. It feels like a very inelegant solution to balance issues, and can create a downward spiral for players who haven’t bought the gold-doubling IAP. Grinding for coins to buy potions to properly try a stage again after failing feels bad at the best of times, but when you’ve got a stamina meter attached to it, it’s even more dreadful.

On top of that, the game also suffers from quite a few bugs. This review comes after the developer has diligently issued more than a few updates, and I’m still getting the occasional full-stop crash or lock-up. It’s frustrating enough as it is with its stamina system and random difficulty spikes, I don’t  need the game crashing mid-battle when things are going my way for once, too. The developers have been on this problem as quickly as anyone could be, so I’m sure it will be resolved in time. Still, I can’t review the future. The problems still exist in the present version, and that’s the only one I can really talk about here.

No one can say the developers of Glyph Quest Chronicles didn’t give other methods of monetization a fair try, so it’s hard to get upset at them for going in another direction this time around. Nevertheless, while the end result might be more profitable for them, the means to get there have resulted in a worse experience for the end user. I appreciate the many ways the team tried to soften the free-to-play blow, and I certainly like the many little improvements they’ve made to the mechanics, but it’s not enough to balance out the equation. There’s still a great puzzle game in here somewhere, but it’s never been harder to appreciate it.