Before we get going with this review, let’s address the elephant in the corner of the room: SEGA Forever. SEGA’s latest attempt to bring its classics to iOS has had a bit of a rocky start thanks to a frankly lackluster Genesis emulator. SEGA got a lot of feedback from those initial releases and, to their credit, have been working hard trying to address the problems. Their latest release is Ristar (Free), and it comes with a new emulator build that shows significant improvement over previous ones. It’s not perfect, mind you. While it greatly improves on the framerate and sound issues many have had with earlier releases, this version sometimes has some screen tearing. Nevertheless, it’s a solid enough release that we feel it’s worth reviewing this game largely on its own merits. 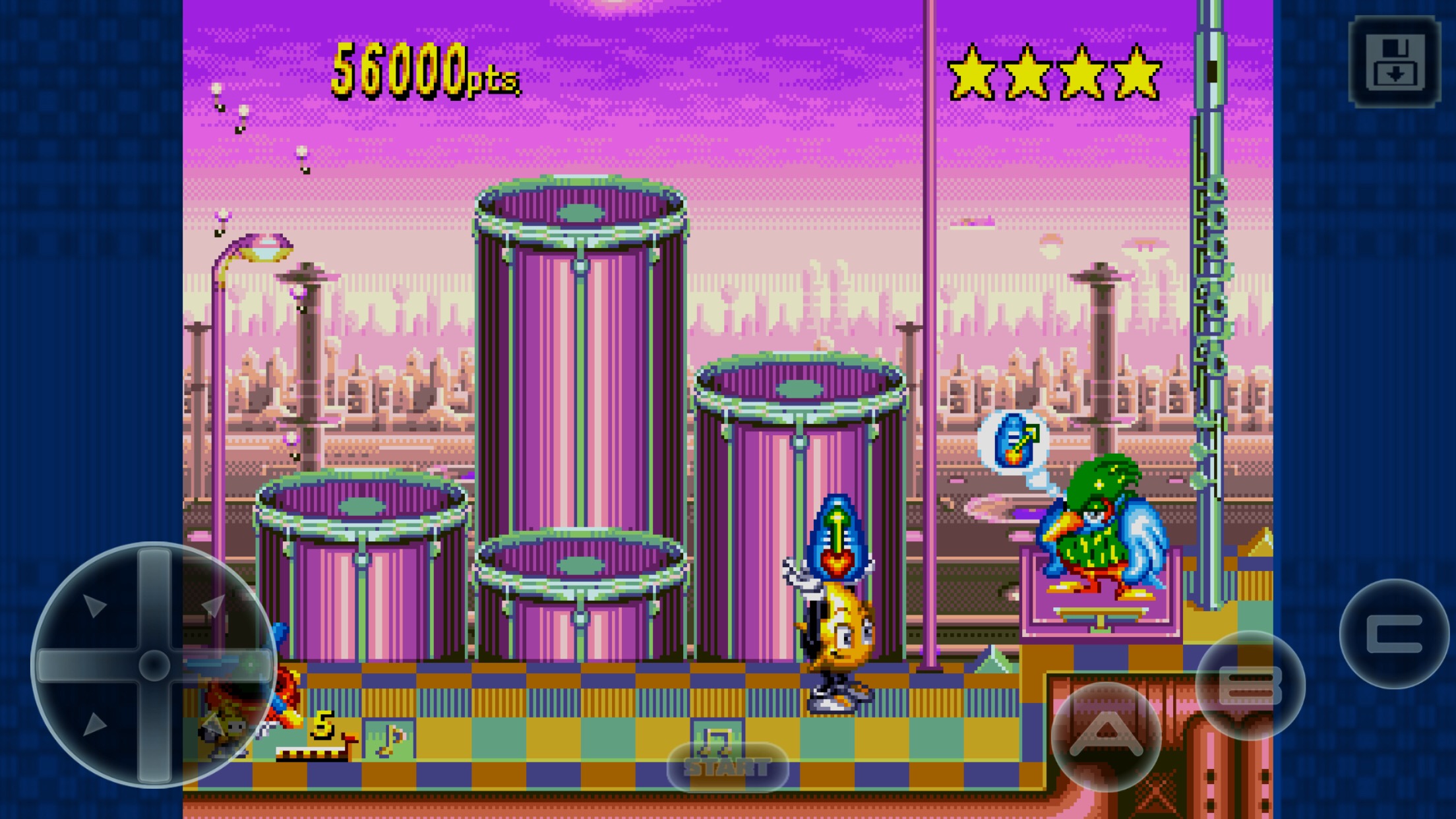 It’s a funny thing, but in spite of the name of the developer and the popularity of their namesake, my favorite games from Sonic Team tend to be the ones without Sonic in them. Ristar isn’t officially a Sonic Team production, but it might as well be. Most of its key staff members were coming off of working on Sonic CD and, after finishing Ristar, comprised a big part of the team behind the SEGA Saturn game NiGHTS Into Dreams. The main character himself, the titular Ristar, evolved from a prototype Sonic Team cooked up when they were brainstorming the original Sonic the Hedgehog. Yet for all Ristar shares with his famous older brother, his game is very different. It’s more methodical in its pacing, and its stages are far more linear. This was a point of criticism against the game when it released in 1994, an era where even Mario was chastised by some for lacking Sonic‘s qualities.

To discard Ristar on those merits would be silly, however. It can be a slow game at times, particularly early on, but it knows how to apply pressure when it needs to. Ristar walks and jumps at a normal pace, but he can sometimes get moving very fast. Obstacles and other stage gimmicks will have him flying across the screen at a rapid pace. There are also poles that Ristar can swing on to launch himself into the air like a shooting star, bouncing off of any walls he hits. Mastering these various tricks and techniques is essential to finding all of the game’s secrets. If you don’t care about sniffing out those hidden rooms and treasures, Ristar is a much more straightforward romp, one that seems a little easy initially but becomes considerably tougher at the halfway point. 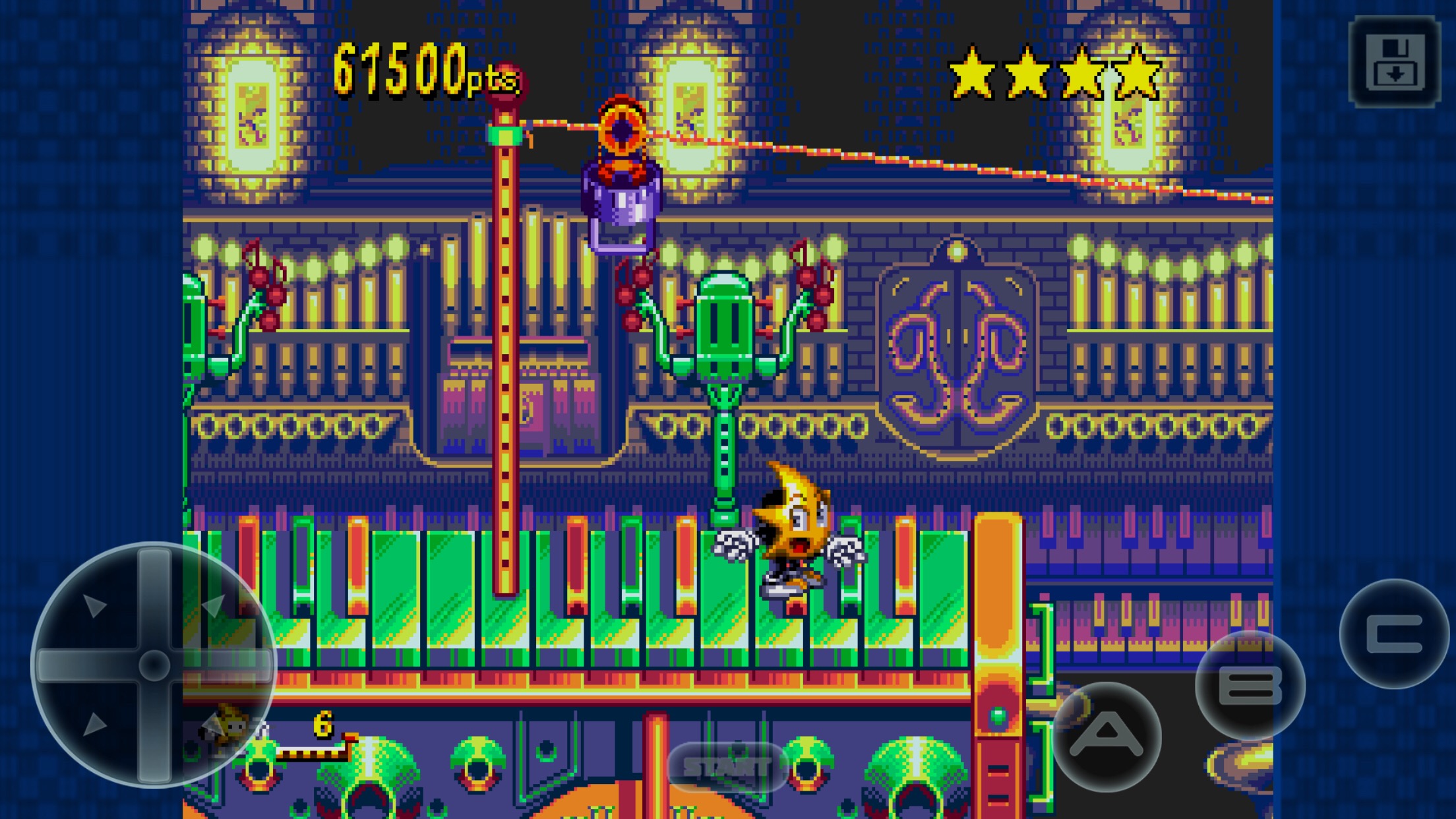 Besides his flashy shooting star move, Ristar’s main ability is to reach out and grab things with his stretchy arms. Unlike most other mascots, Ristar can’t defeat enemies by stomping on their heads. If you can grab them when they’re vulnerable, however, he’ll make short work of them by springing his body into them. Those elastic limbs aren’t just for battling baddies, though. You can also use them to grab onto handholds, pick up and throw objects, or even to climb up sheer vertical walls. You can reach out in eight directions with his arms. Since Ristar takes damage when an enemy touches him from any angle, you’ll need to get good at grabbing everywhere. In total, Ristar can take four hits before he loses a life, but you’ll find life-replenishing stars in abundance in most levels. This takes a lot of the edge off of the difficulty. If you choose to abuse SEGA Forever’s ability to save anywhere, what difficulty remains practically washes away. I’d advise only making a save at the start of each level and trying to do things more or less the honest way.

The game consists of seven different worlds (literally), each with two stages and a boss fight. That might seem a bit on the light side, but individual stages tend to be fairly lengthy and unique in their presentations. The bosses are cleverly designed, though they generally have a worse bark than bite. Beyond the themes of each planet, just about every level has some special gimmick to it that helps it stand out from the rest. My favorite of the bunch is the music planet, Sonata. In the first level you need to carefully bring metronomes to singing birds that block your way. You’ll need to use crane-catchers, gusts of wind, and some good old-fashioned platforming chops to get those metronomes where they need to go. The second level has you bouncing on drums and riding ziplines, making your way across light-up piano keys while living guitars try to crush you. The boss fight has you taking on a giant bird that feels it deserves center stage at a concert. Unfortunately, its singing skills leave it better suited for an American Idol try-out. 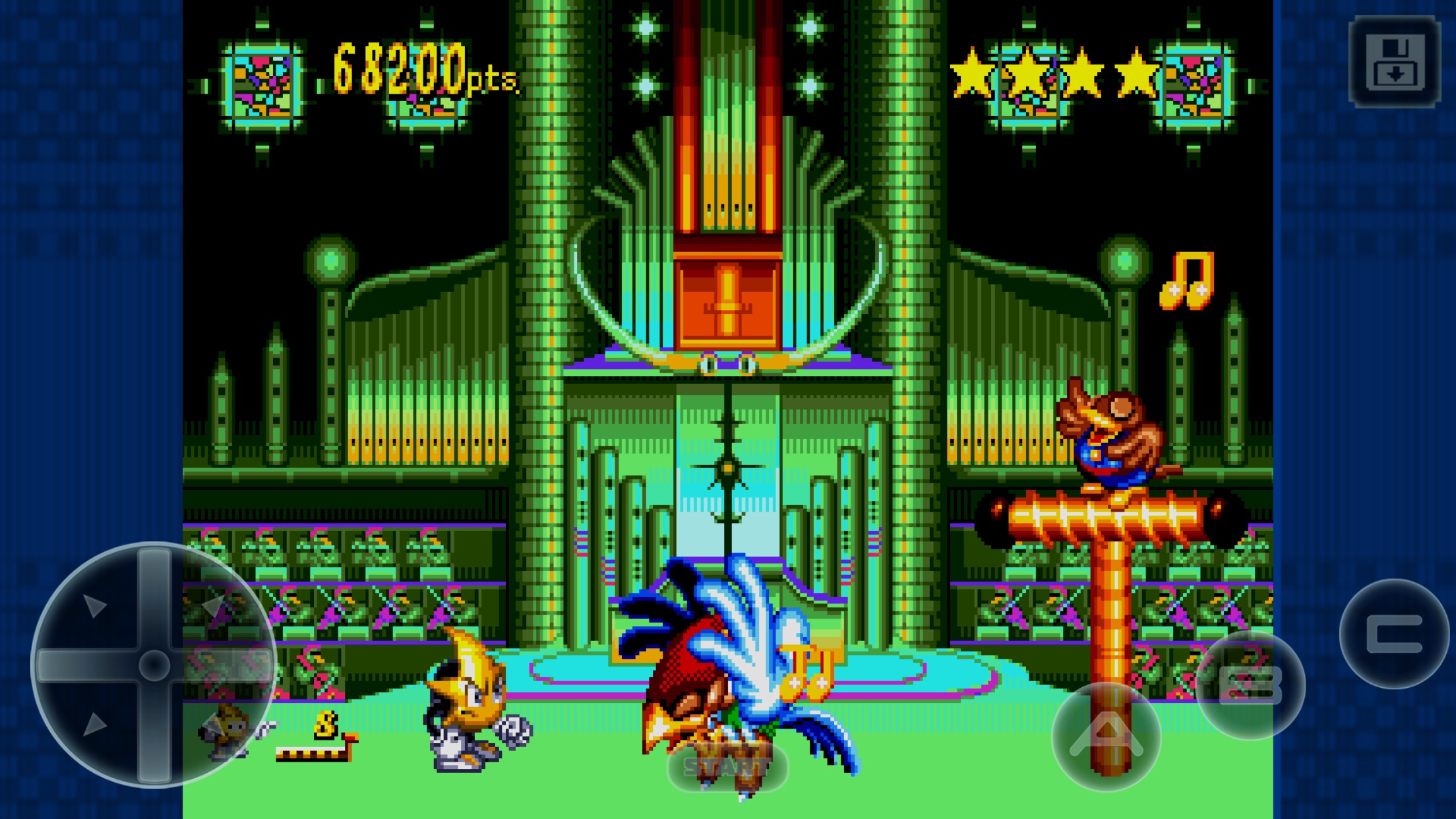 While that’s the one I like the best, every planet in the game is brimming with that kind of charm. While the gameplay mechanics are solid and enjoyable, what really elevates Ristar is the game’s personality. Everything is gorgeously detailed and well-animated, putting the Genesis’s color palette to the test to create the sort of colorful canvasses that SEGA did so well in its prime. The music is equally wonderful, and while I had my worries about the emulator letting me down here, it does a reasonably good job. The percussion is a little weaker than it should be and there’s still the odd bit of static, but the compositions generally shine through as they ought to.

Like the other SEGA Forever releases, you can play Ristar for free as long as you can put up with the frequent ads it will throw at you. You can buy out of the non-SEGA ads for $1.99, leaving only the occasional ad on start-up for games like Crazy Taxi Gazillionaire and so forth. The game supports MFi controllers, but unlike some of the other games released on the service so far, Ristar is quite easy to play with virtual controls. Landing the directions can be slightly fussy, but with only two main actions to worry about, the game lends itself well to the default SEGA Forever UI. Happily, you can reposition buttons if you don’t like that layout. You can also save your game at any time, so those who like to save state their way through classic games are covered.

Of all the games newly released on iOS through SEGA Forever, I think Ristar has come out the best. Granted, a big part of that is the improved emulator, but I also think that its mechanics and difficulty level suit the platform and its input methods better than something like The Revenge of Shinobi (Free). The game itself is, in my opinion, an underappreciated classic from the Genesis library, the kind of game that could have been a big hit if it had only released a year or two earlier. In short, this is exactly the kind of game I’d like to see more of if SEGA means to stick to mainly Genesis games with the SEGA Forever initiative.