In Cityglitch ($2.99), a new puzzle game in app stores now, the world is filled with haunted cities full of glitches—strange, irregular, and dangerous beings that torment the residents. It falls on a red-headed protagonist to fly through each city from rooftop to rooftop and light runes in order to conduct a magical ritual that will free each city from their glitches. Naturally you play as this protagonist and must solve a puzzle to light each rooftop rune. Each puzzle takes the form of a five-by-five grid. One or more of these spaces will be occupied by pink oblong circles which are the runes of that rooftop. When your protagonist steps on a rune it will light up becoming two oblong circles, one nested within another. Your goal is to light up all of the runes. 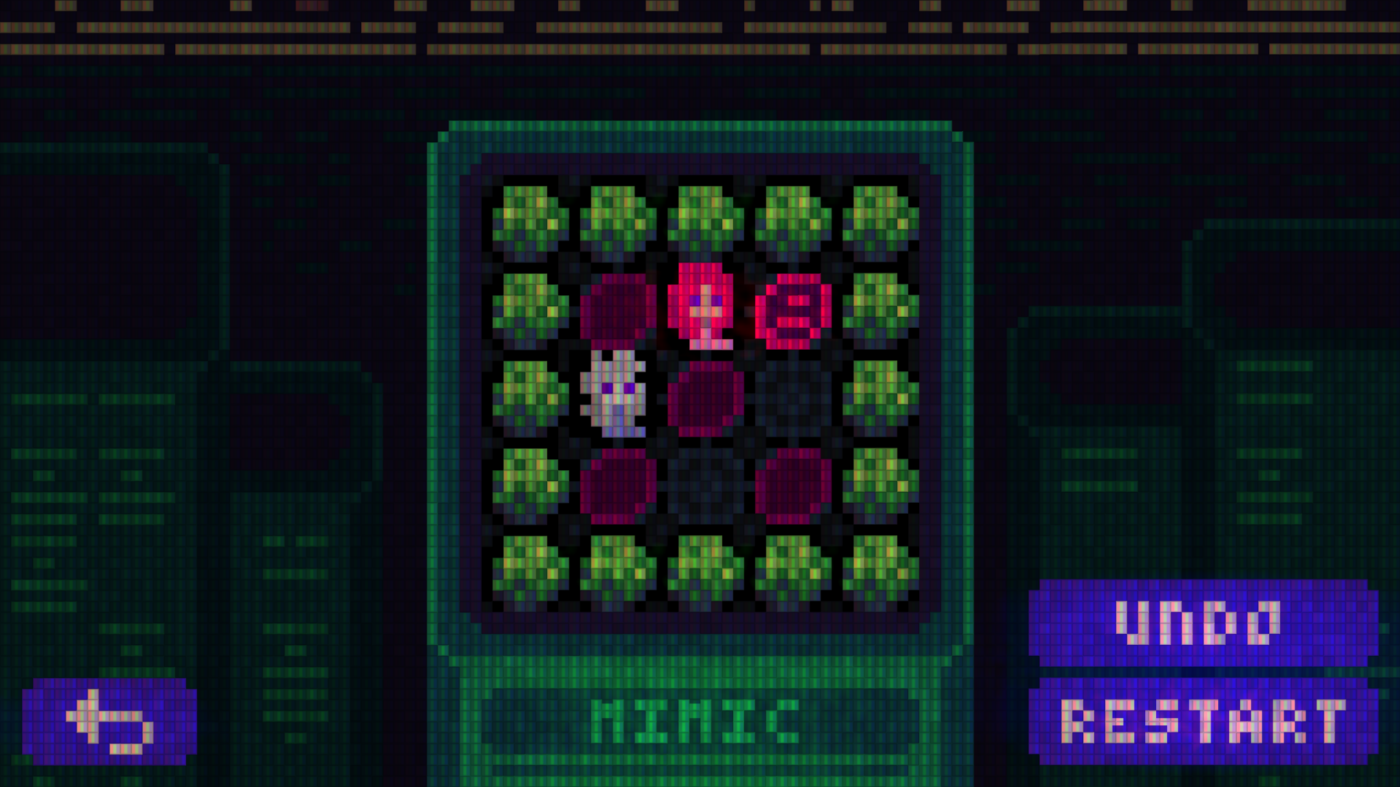 Each rooftop also contains a number of green trees, spaces you can’t step into, as well as a number of glitches determined to prohibit you from lighting all of the runes. One can’t blame them, really, because once you light them all…poof…no more glitches. Cityglitch is a turn-based puzzle and each glitch has its own movement pattern. Ghosts move one square a turn directly toward the protagonist. They must always end closer to her than they started. Cats are largely stationary, that is, until you enter a square adjacent to them at which point they move one square directly away from you. Arrows blast across any open spaces in a straight line until they hit a tree or level wall. The next turn they come back the other way.

The protagonist moves like a queen in chess. As many squares in any direction as far as it is possible to go before running into an obstacle. This movement, and your ability to outthink the glitches, are your best weapons against their superior numbers. Cityglitch is all about figuring out how to manipulate the glitches and their prescribed movement patterns to your advantage. You can set up cats and even ghosts as roadblocks to arrows, for example, and lead ghosts on a merry chase around obstacles to free yourself for a big move across the board and to a rune. One thing to watch out for is already lit runes, of a glitch steps on those squares the rune will go out and need to be reactivated by stepping on it. 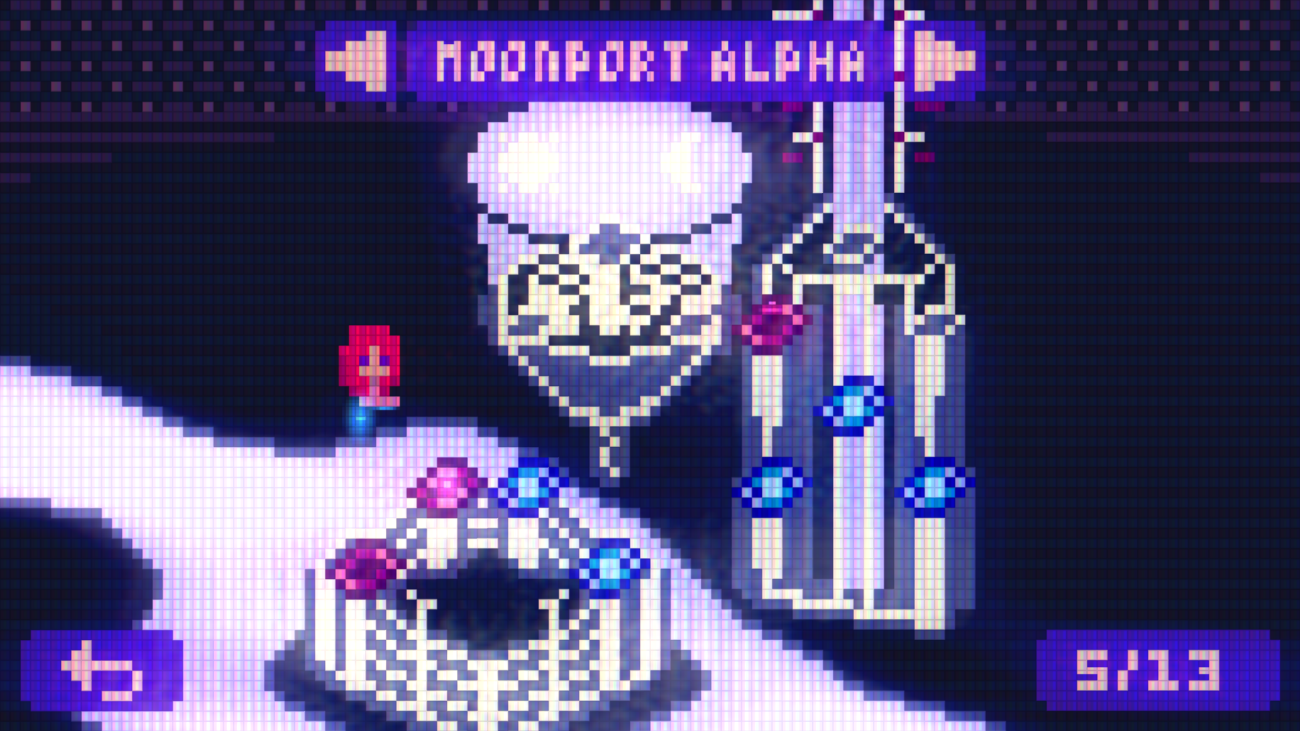 Once you beat a rooftop level you’ll fly across the city to another. Rooftops within a city have variable difficulties which serves as a nice change of pace. It’s also helpful for the times you get stuck on a particularly difficult level. You can just fly off to tackle another and come back when you’re ready to give it another go. This design helps alleviate the frustration of getting stuck some players have with challenging levels and puzzles overall. Once you’ve fixed enough rooftops of a city a boss rooftop appears. Boss fights are particularly challenging as they have far better movement capabilities than your run-of-the-mill glitch.

Cityglitch is a very challenging puzzler, especially once you arrive in NEO FOLIA—the third city—where things escalate quickly. I had considerable trouble figuring out how to circumvent the wall of cats and spaces of doom—anything that finishes a turn on them is vaporized—in HIGHERHOME for example. FLATTEN is a very challenging rooftop where you have to turn a cat into an unwilling blocker to succeed. BROKENSLASH, on the other hand, is an exercise in losing a couple ghosts in hot pursuit, at least long enough to light up four different runes. Each of these levels plays much differently and there are more puzzle variations besides. This depth of mechanics and solution types is great and really makes Cityglitch feels like a few different games.

I also really like the rooftop level names and how they forecast what’s in store for you within. Some of my favorites are PINCER, STONETRAP, THE CHASE, and SICKLE. There are 95 levels in total spread out over 7 cities. Each city has its own unique boss-fight level that must be won to move on. Another cool feature is a fairly subtle move counter. Cityglitch is largely a minimalist puzzler, which means no tutorial, stars, points, or move limits. There is, however, a visual indicator of how well you did on any particular rooftop. When complete rooftop color lets you know how many moves it took to finish the puzzle. Light blue is what you’re after for a “high score" but it’s subtle enough that you can easily ignore it if you don’t care about move counters and the most efficient possible solution. If you do care, however, it’s just an added avenue toward challenge.

Cityglitch is a very cool, very fun, puzzle game with compelling mechanics and a wide variety of level types. The techno-arcane theme is interesting and well supported by the game’s graphics and soundtrack without being a distraction. The game is a definite challenge, especially once you get to the third city where the difficulty ramps up significantly. Casual puzzle fans might get turned off at this point, but hard-core aficionados will likely dig it. Check the game out now and head on over to our forums for more info.