I’m a big fan of puzzle games. They are the perfect genre for quick play sessions on a phone while out and about or during brief stretches of downtime at work or at home. I’m constantly on the look-out for fun new titles to add to my collection for this very purpose and am pleased to be able to mention follow.trail (Free), a path-clearing puzzle game released just last week. In follow.trail your goal is simple: Eliminate a series of squares from a rectangular game board on your way to the exit. You do this by following a trail of dots, represented by what look like standard game dice with one, two, or three dots. Each time you land on a die you reduce the number of dots on that die by one. When all dots are gone the die disappears, leaving a blank space on the rectangular game board. Your path must move over all the dice in a level enough times to eliminate them on your way to the checkerboard die that serves as the exit for each level.

Most of the dice in a level are the dotted kind, but many have different symbols that denote special powers. Arrows, for example, slide you one square in the direction indicated. Other special dice are portals that bring you to a matching die somewhere else on the game board. Others still are a set of two linked dice that disappear after a certain number of combined touches. Further complicating matters is what happens if you move onto an empty space—a black die with a single dot on it appears. Subsequent visits to a black die increases the number of dots by one, rather than reduces them.

New mechanics in the form of special dice are introduced regularly as you advance through the game’s many levels. Follow.trail doesn’t introduce these special dice to you, however, you’re left to figure out what they do on your own. The game of the minimalist school overall, in fact, and spares the player a tutorial of any kind in favor of self-discovery. I really liked this aspect of the game and it was fun to take a look at a new board with an unfamiliar die and try to guess what it’d do before I hit it. 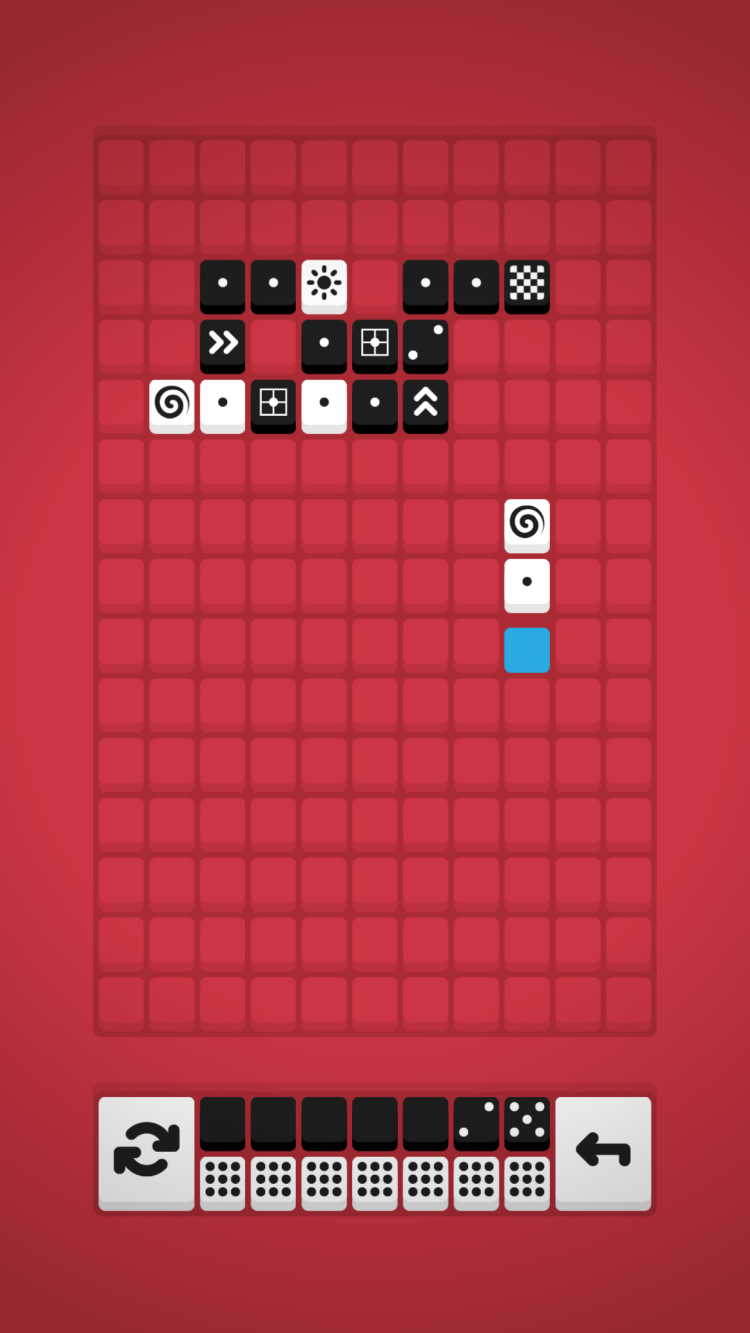 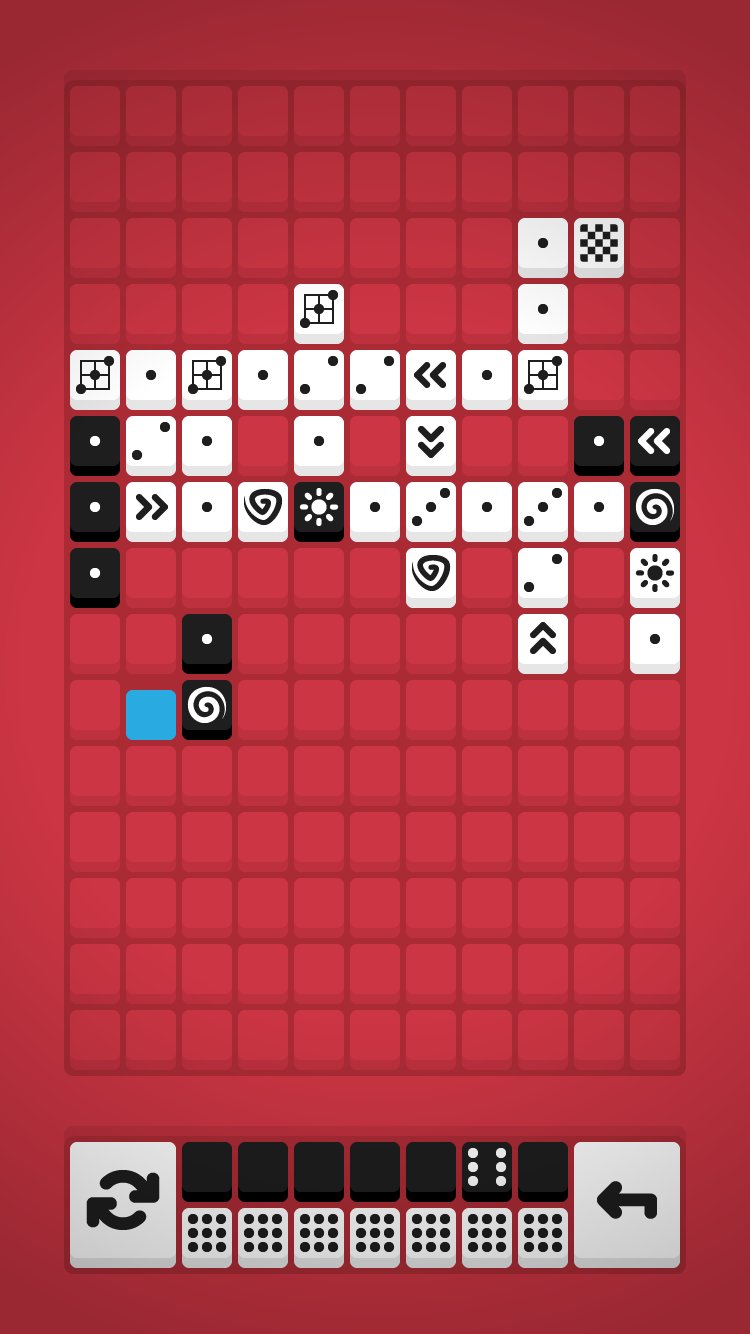 The mechanics are all clever, especially the one with the sun symbol on it that, when stepped on, makes all of the white dice black and vice versa. The game changes dramatically with the introduction of that symbol to become much more challenging. It also puts you in the position of creating your own solutions to many levels, rather than poking around until you discover those meant for you. You can freely move over blank squares, creating black dice, with full knowledge you’ll be able to flip them back to much more manageable white ones soon enough. These types of levels require some fun trial and error made more enjoyable by the game’s undo button, an absolute must in a game like this. You can undo as many moves as you like which makes the game much more tactical as you play around with different solutions, discard them, and give it another go. Often it makes sense to completely refresh the level and get a new start, but it’s quite nice to have both options.

The levels in follow.trail also have a nice continuity to them. The aforementioned checkerboard exit for one level serves as your square of origin for the following one. This makes the game feel seamless, especially if you’re good enough to roll right through one level into the next. Most people won’t be, though, especially in later levels and this game is challenging. You can’t buy a hint. You can’t skip a level. You have to solve each and every level. This means you can, and probably will, find yourself stuck on more than one occasion. Puzzlers who enjoy running into these roadblocks and stepping away for a bit before tackling a tough level anew will really appreciate this aspect of follow.trail. There’s lots of those awesome “I can’t do it" to “Yes, I did it" transitions and plenty of hits of adrenaline and happiness when you successfully defeat a particularly tough level. If you get frustrated when stuck like this it may not be the puzzle for you, though.

I really like clear-the-board puzzles where you have to figure out your best order of operations to win. Follow.trail is a very good example of this type of game and compares favorably to similar puzzlers in my collection. Blyss ($1.99) has you swipe a trail along dotted dominos to clear shapes, and ultimately entire levels. Trilogic ($1.99) also offers shape clearing mechanics, though there it is based on elements—water and fire for example—with natural strengths and weaknesses to each other. If you’ve played and enjoyed these and other similar games, follow.trail will deliver the same type of quality gameplay.

There are mountains of puzzle games on the App Store and many more coming out each and every week. Sadly great games like follow.trail get lost in the flood, especially without an App Store feature. If you’re a fan of puzzle games I recommend you pick follow.trail up and give it a try. The simple and clever design and high level of challenge will provide many hours of entertaining in both bite-size chunks or longer play sessions. Make sure to head over to our forums and provide your impressions of the game as well.