This week developer The Gentlebros released their first title since the 2015 Kongregate published Slashy Hero, and can I just say that I love this new game to pieces? It’s called Cat Quest ($4.99) and it’s a heavily streamlined, very mobile-friendly take on an open-world action RPG. Yes, it features cats and that automatically wins it points in my book. And yes the cat art is so adorable it even wins some bonus points. But it’s not all about the cutesy cutesy in Cat Quest, as these gentle bros need to be commended for hitting all the marks that make for a fun RPG adventure without losing anything in the process of condensing it down for a pick up and play mobile experience. 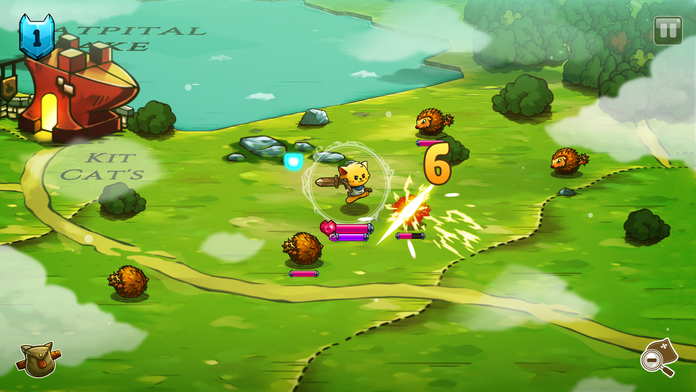 The story in Cat Quest is straightforward and a little cliche. Long ago dragons ravaged your land and were killed off by a special breed of cat known as the Dragonblood. Now the dragons have returned and an evil cat has kidnapped your sister. After almost dying in your boat at the hands of the evil one, you wash ashore and are aided by a spirit cat who guides you through the game. You discover that you are one of the fabled Dragonblood which means you can learn magic and are the only hope for eradicating this latest dragon threat in the land of Felingard. Oh, did I mention that this game is absolutely stuffed with cat puns and wordplay? It’s purrific! 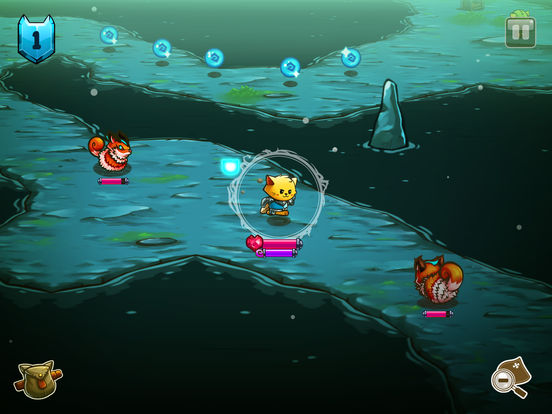 Anyway, the story does its job but the real treat in Cat Quest is simply playing it. As mentioned the game is heavily streamlined but still retains a lot of choice for how to build out your hero’s abilities, finding and using new loot, and battling a number of neat enemies. The game uses a simple tap to move/tap to fight system highly reminiscent of Crashlands. It works great but if you aren’t a fan of that style of control a virtual joystick and button or two would be a nice option to have. There’s also a really clever radial menu that has you tapping and holding then dragging to whatever magical spell you want to unleash. The action pauses while you’re doing this and I’ve found combat to be a total joy since you don’t have to fumble around with anything due to the smart control scheme.

Besides the smart controls and UI, what I love about Cat Quest is that it always feels like you’re accomplishing something. There’s rarely points where you feel like you HAVE to grind just to proceed, and in general it seems like you’re always advancing things forward even if you’re just playing for a few minutes at a time. Just through the natural act of exploring the interesting land you’ll progress your character enough to keep on going. There’s plenty of high-level additional dungeons to go back and take a crack at once you’ve completed the story, so if you do enjoy grinding just for the fun of it you can certainly do that. But it never feels forced on you in an effort to increase gameplay length, and being that Cat Quest is a fully premium game, it’s certainly not geared towards getting you to buy stuff through an imbalanced difficulty curve.

It’s like the Gentlebros took all the great parts of a 10-ish hour RPG, dressed it up in some of the cutest cat visuals ever, and left out all of the boring filler. And due to the constant feeling of advancement it’s a really hard game to want to put down. You’re always wanting to get just one more of those carrots on a stick. All of this, again, is in a very mobile-friendly package that’s easy to pick up and play at any time. While not a terribly long game everything about Cat Quest hits on such a high level that I certainly hope for more content down the road, or even some form of endless survival arena just because the combat is so much fun I could see coming back to that long after finishing all the story content. Whether you even like cats or not Cat Quest deserves the attention of anyone looking for an entertaining and satisfying adventure.