Way back in May of last year, developer Asymmetric Publications announced West of Loathing, a single-player RPG set in an absurd version of The Old West that was a spinoff of sorts of their ridiculously popular and successful browser-based MMO Kingdom of Loathing. The game was announced for both desktop and iOS at that time with a planned release for sometime in 2017. Well, today’s your lucky day if you’re a desktop gamer as West of Loathing launched on Steam earlier this morning. Here is the brand new launch trailer to give you an idea of what West of Loathing is all about.

That’s all well and good for those PC gamer types, but what if you’re an iOS gamer? Time to put on your Patience Cap. Asymmetric has always hinted that the iOS version would be coming after the desktop version, and in a Reddit AMA today the game’s creator Zack “Jick" Johnson said in regards to a question of when the iOS version would arrive that “We keep telling people 2 or 3 months. I sincerely hope that this is the truth." I sincerely hope so too! 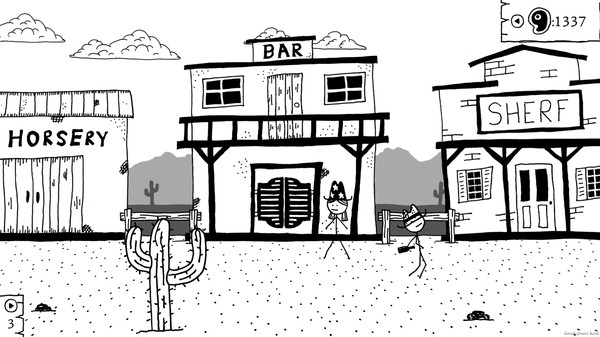 Don’t let the stark black and white visuals and stick figure characters fool you, Kingdom of Loathing is an incredibly deep game (it’s a browser game that’s been actively played for the past 14 years, so yeah) and despite being a single-player affair West of Loathing looks to be similarly filled with content and silly jokes. It really is screaming for an iOS port so once we have some more concrete information on how that’s coming along we’ll let you know. In the meantime if you just can’t wait you can pick up West of Loathing on Steam for a cool ten bucks, which is 10% off its normal price of a cool eleven bucks.