Last week, the turn-based bathing puzzle game Swim Out was announced for iOS, and I was impressed with how this game appeared to reinvigorate relatively tired gameplay mechanics with a fresh thematic approach. In many ways, the upcoming Tiny Bubbles takes a similar approach – and not simply because of its shared love of all things aquatic. At its heart, Tiny Bubbles shares many tropes that you may have seen before in the App Store, and its color matching and clearing core elements are ones that have been in puzzle titles for decades. However, as its name implies, the bubble aspect leads to some breathtakingly slick and creative action through the game’s unique physics engine. The resulting amalgamation is a puzzle title that looks to be incredibly intuitive and soapy slick, and the developer is looking for a limited number of beta testers to try out Tiny Bubbles before its fall launch on our forum thread. 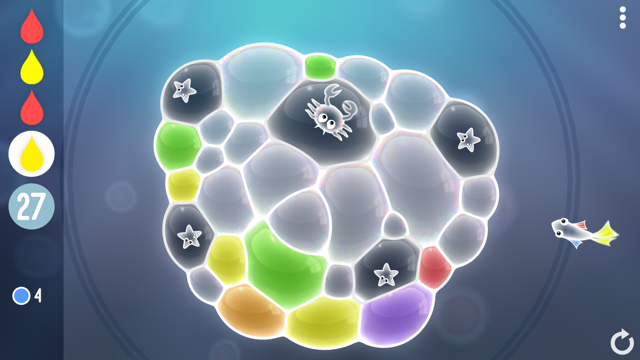 During its time in development, Tiny Bubbles has managed to collect a number of accolades, such as being singled out as one of the ten best indie games at the upcoming PAX West conference – and it’s not hard to see why. As well as being a vibrant assault on the senses with its beautiful puzzle presentation, the inclusion of a number of unique elements – including miniature animals that can be found within the bubbles – gives the game a depth beyond its surface beauty. Over 160 puzzles over the course of seven worlds, with Arcade and Puzzle modes that alternate between methodical moves and frenetic action, will also ensure hardcore strategists and high-score chasers alike will have a lot to do within Tiny Bubbles.

With a heavy emphasis on genuine interaction between the bubbles, and the inspiration for the game coming from the developer’s grandfather’s MIT science background, Tiny Bubbles distinguishes itself from its peers by building a puzzle game within a concept, rather than attempting to shoehorn an absorbing theme over derivative gameplay. With so much care and thought implemented into the project, I struggle to see how Tiny Bubbles can be anything but a roaring App Store success. If you’d like to be a part of the ongoing development for Tiny Bubbles and try out the game early, sign up for the limited beta testing phase on our forum thread.