As a premise for a ChoiceScript game, the one Demon Mark ($4.99) uses is a promising one. Set in a world of Slavic mythology, the story sees your young sibling kidnapped by a dangerous demon. Named the Uhin, she brands your characters with a curse called the Demon Mark and challenges you to come and rescue your family member. With a sword at your side and provisions in your bag, you set out on a road trip-style adventure through a veritable who’s who of Slavic folk tales. Although we’ve started to see more games taking advantage of this rich source of lore, it remains a relatively untapped setting that offers high potential. Demon Mark is at its best when it drops you in the thick of these fables, and the author’s passion and knowledge certainly shines through. Unfortunately, it ends up dropping the ball on some of the more fundamental elements of a choice-based game. 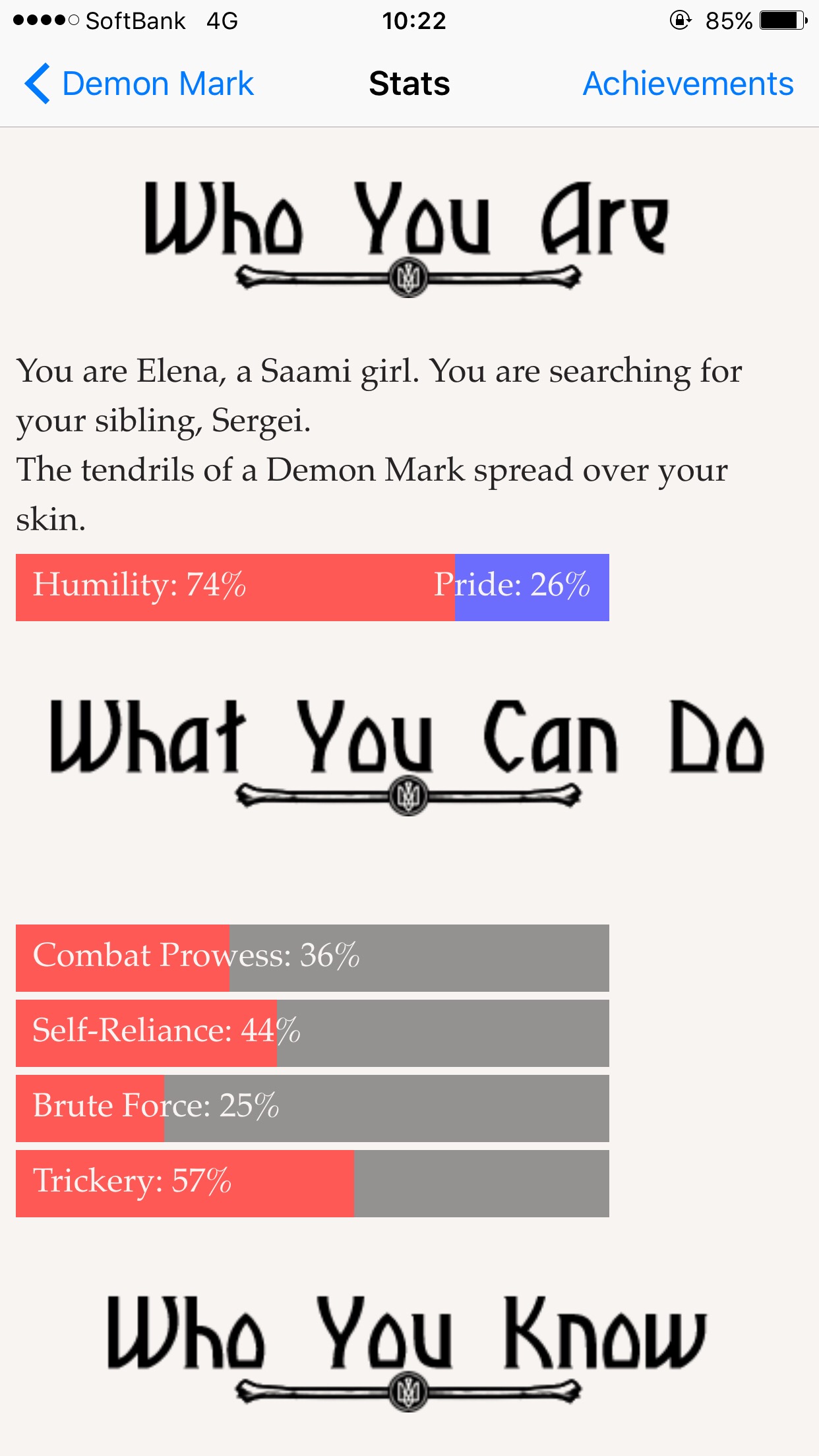 As usual, the beginning of the story is about setting up who you are and some of your basic circumstances. No matter what, you are the eldest child of farmers of some sort, spending your youth happily playing with your sibling and helping out with chores in your small village. Your mother is always a former soldier, while your father is always something of a homebody. Your name, your gender, and which group of people you hail from are selected by you, and your basic statistics depend on how you handle a few early choices. Your sibling is always kidnapped, and you must go after them. From there, you have a few different paths to your goal. You’ll encounter many obstacles, and how you choose to resolve them will shape your character and help determine the ending you’ll see.

Virtually omnipresent in those choices is that Demon Mark you’ve been branded with. It offers an easy way out of just about every dangerous situation, as it grants you nebulous powers if you scratch it. Every time you do, however, the Mark becomes bigger, taking away some of your humanity. It sits there, tempting you, and you will need to use it a couple of times if you want to see the story through. The key is not using it more than you have to. I mean, I suppose that’s the key. To be honest, going all in on the Demon Mark didn’t produce the worst ending that I saw. Oddly, the worst ending that I ran into came from my first play where I was constantly trying to do the right thing and be as human as possible. The result of that playthrough really irritated me because the story committed a number of sins I consider grave when it comes to this type of game. 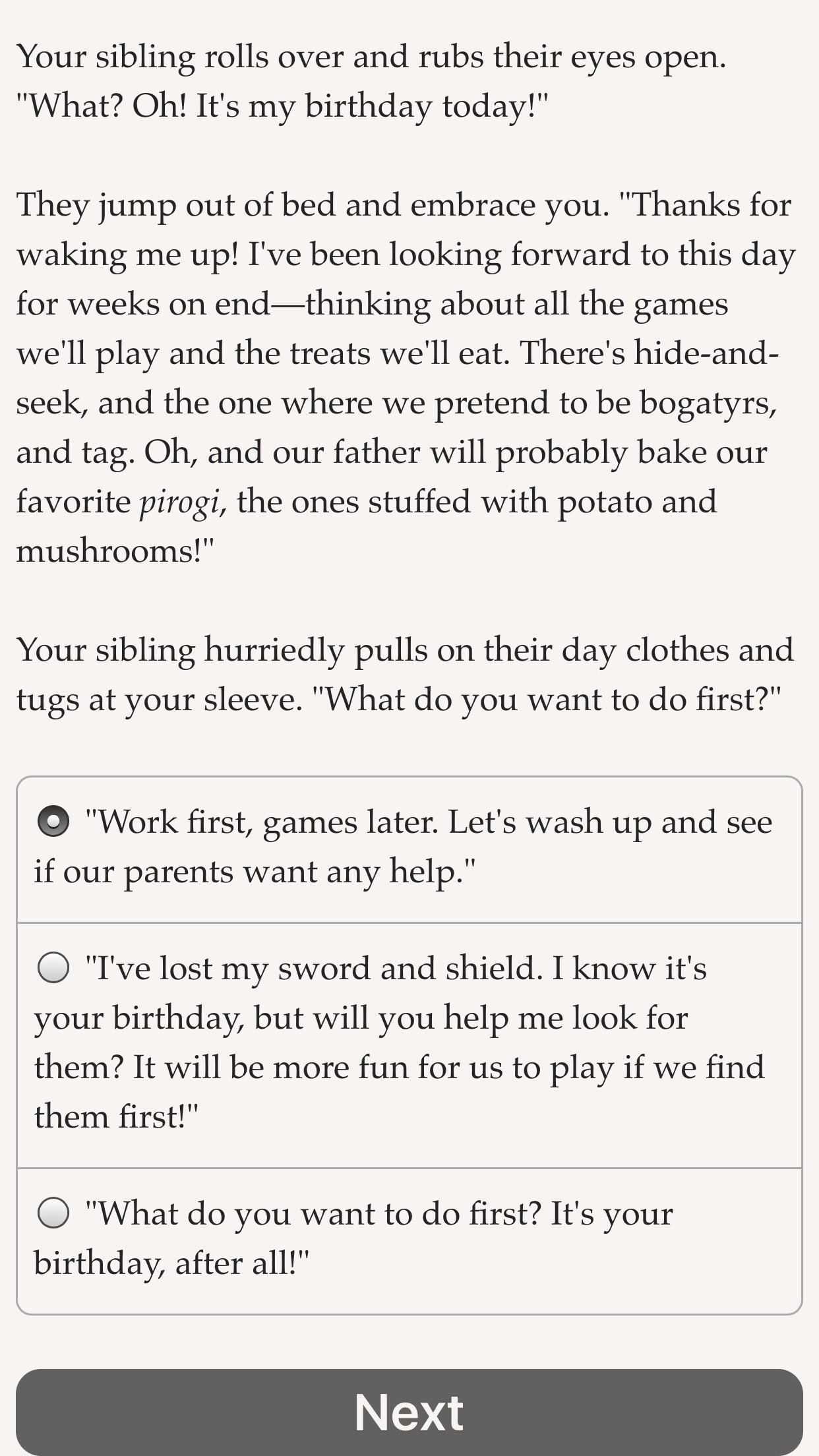 Without spoiling too much, there are many places in the game where you are given a choice that doesn’t produce the expected result. Now, this happens in these games. Sometimes, the author needs to take the wheel to get the story where it has to go. It’s never satisfying to do that, but it must be done now and then. The important thing in doing that is to try to minimize the impact on the player’s feeling of agency in the story, and Demon Mark is terrible about that. It’s all too often the case that external circumstances aren’t what produce the undesired outcome, but rather the player character herself simply disobeying your choice. If I choose for my character to wait for someone to return rather than go out searching for them but the author needs me to leave that area, there are various ways to get me to go. It’s not very satisfying, however, when the character simply decides to leave anyway without any added input from me.

This manifested badly in that first ending I got. While trying to get through the final trials, my character was punished for using scraps of letters as kindling. Wait, what letters? And when did I choose to use those as kindling? If they had been mentioned before, I must have missed it. And I know I didn’t set anything like that on fire. Yet the way the story is written, that contributed to my bad ending. Aside from that, other things I hadn’t done or that the story hadn’t telegraphed at all were taken into account to produce that lousy finish. Getting a bad ending isn’t a problem in and of itself. It’s par for the course with this kind of game that you have to play through a few times to get the best ending. But getting a bad ending should at least give you some idea of what you would have to do to reach a better one, and I didn’t feel that at all with Demon Mark. 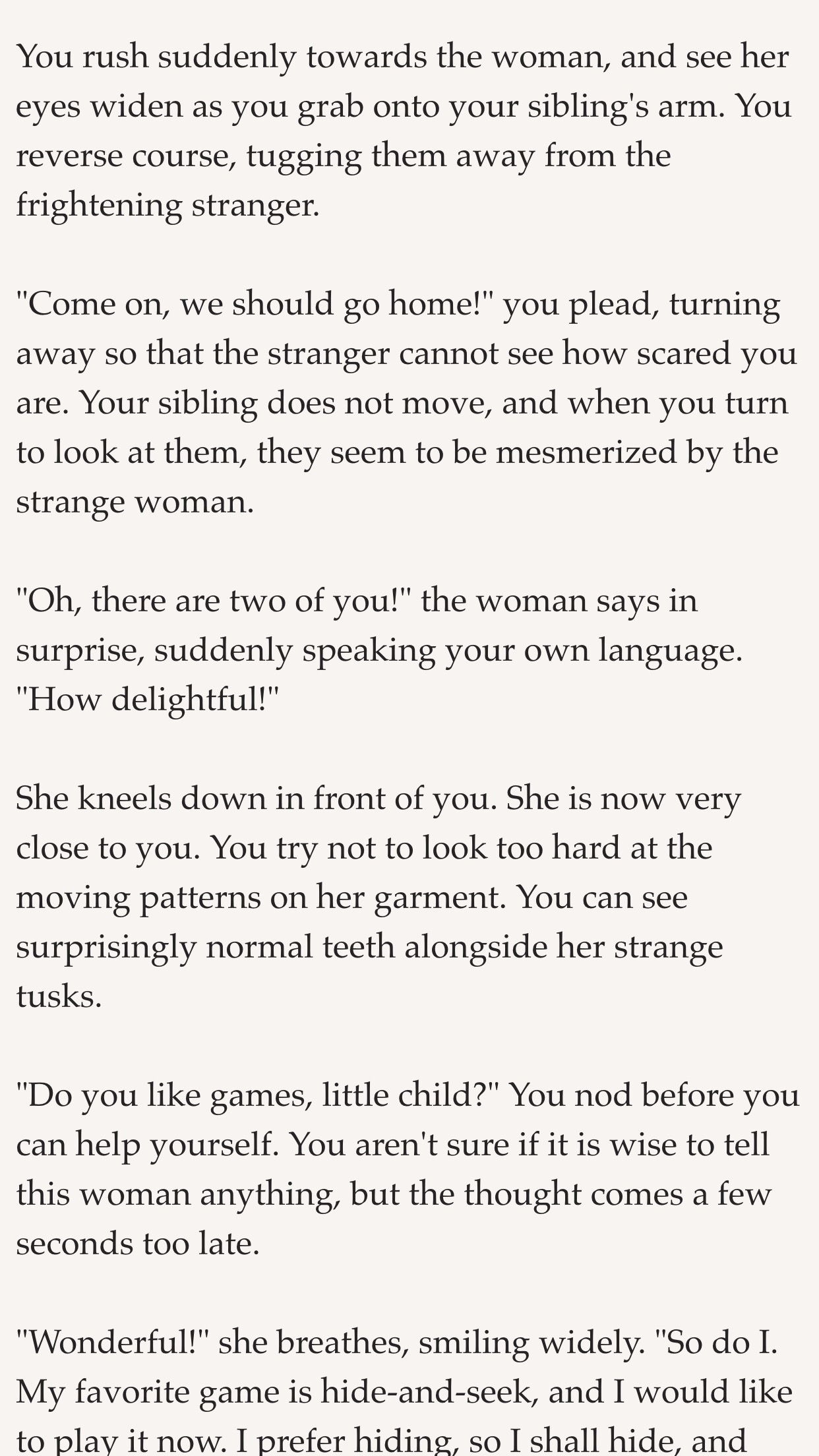 Indeed, when I restarted the game, I resolved to just be as awful and bad at everything as I could be. I somehow got a more enjoyable ending from that. I still don’t know why. Getting a reasonably good ending felt like I was playing a matching game, flipping over random cards and hoping for a pair to clear off the board. It’s baffling to me that this was a problem as the internal logic for the various mini-scenarios contained in the overall story was generally quite good. I knew how to survive my encounter with Baba Yaga. The game gave me a good idea of what to do to get what I needed from the legendary bogatyr Svyatogor. I don’t understand why it dropped the ball so very hard on the main arc.

It’s unfortunate, because after a slow and awkward start, I was really getting into Demon Mark. There’s plenty to see and do, and as I’ve already mentioned, the story just lights up when the author is describing the heroes and monsters of Slavic lore. It takes some liberties with certain elements, but it still manages to feel authentic to the myths as we know them. The game hits a really great climax when you assail the fortress of a necromancer to try to recover an important artifact. Sadly, the story slows down quite a bit after that before stumbling to the aforementioned terrible close. At least part of the problem is that the non-mythical characters are somewhat thin, so the full momentum of the story depends on the exciting action and fantasy tourism. It’s little surprise, then, that when it starts to focus back in on the characters, everything falls back down to Earth.

I wish those middle sections were strong enough for me to recommend Demon Mark in spite of its slow beginning and disappointing end, because I absolutely love the idea of this one. When the story is reveling in its source material, it was almost enough to push the needle in that direction. But when a game’s interactivity depends entirely on player choice, it’s the rare game that can gracefully handle disregarding said choices. Outsmarting Baba Yaga might be a lot of fun, but that lack of proper agency, especially in the ending, is why Demon Mark misses its own mark.