Although Bethesda’s and Dire Wolf Digital’s Collectible Card Game (CCG) The Elder Scrolls: Legends (Free) has been out for a while now, we were waiting for the game to go universal before reviewing it. And now that it’s finally out on iPhones, we can talk about what Legends brings to the table and how it stands apart from a game like Hearthstone, which has pretty much become the golden standard for digital CCGs. Since this is a CCG that’s still growing, especially now with the influx of more players and the recent Skyrim expansion, it’s hard to talk about whether its meta is balanced, whether there are cards that need to be nerfed and haven’t, and so on. That’s why I will mostly focus this review on the ways Legends stands apart from Hearthstone and whether those differences are a good thing or a bad thing overall. Spoiler warning: I think they are good overall. 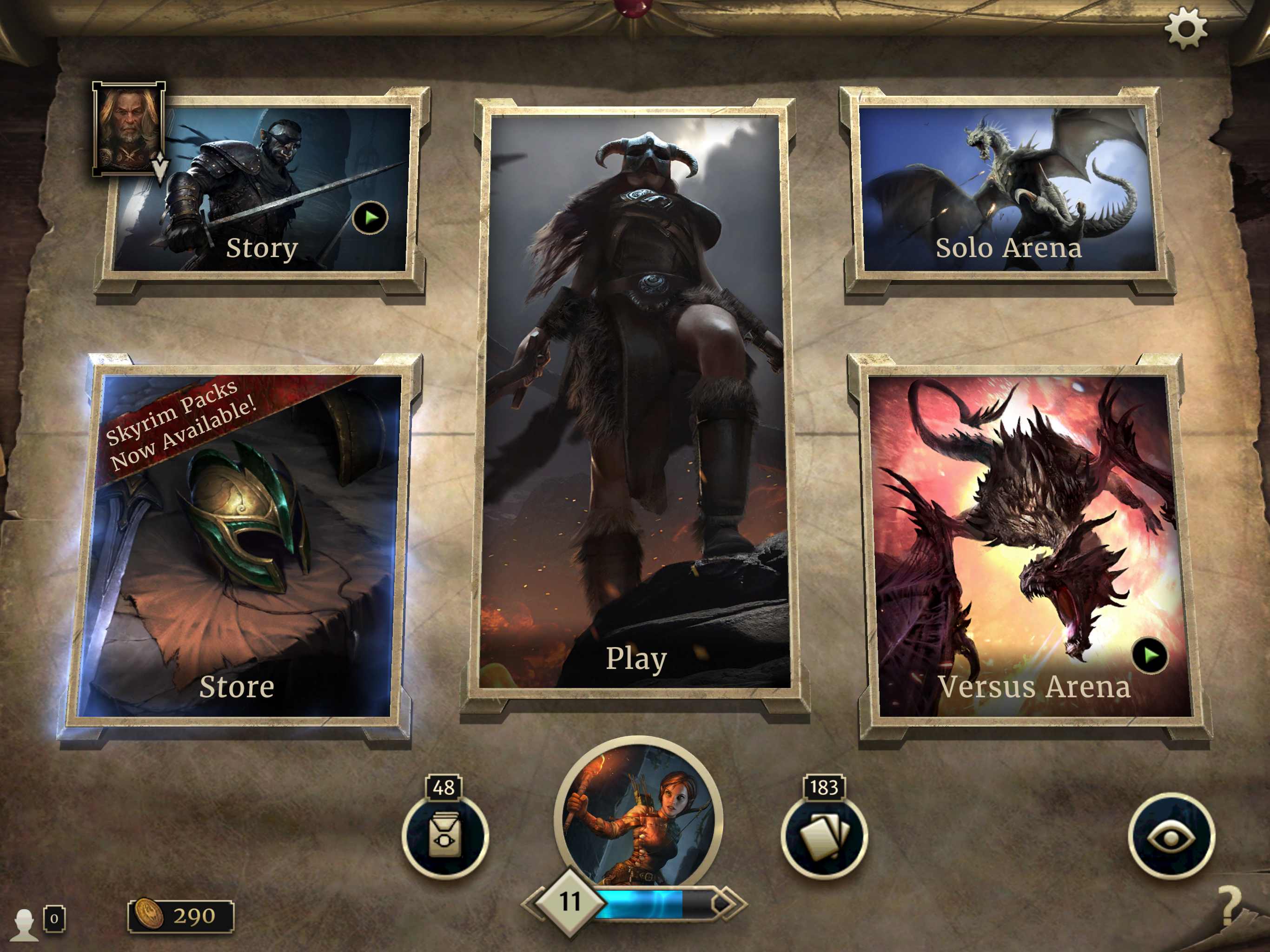 Legends had the benefit of coming out years after Hearthstone, which allowed developers to learn from Blizzard’s behemoth and try to improve the formula. I believe the developers have managed to give us a CCG with some great ideas and fun mechanics that will definitely entertain card players. While the art leaves a bit to be desired, the game’s polish and content should keep you coming back for more. Will Legends draw you away from Hearthstone? I suppose that’s a personal choice, but I’ll try and make it an informed one.

Legends splits its cards into five different attributes: Strength, Intelligence, Willpower, Agility, and Endurance (and, of course, Neutrals as well). You can pretty much figure out from the names what kinds of characteristics these attributes have. When building a deck in Legends, you pick two attributes, and the result gives you the game’s different classes. Strength and Endurance gives you a Warrior deck, Endurance and Willpower gives you Spellsword, and so on. Decks can range between 50-70 cards, so there’s more flexibility regarding your deck building. That flexibility in deck size, along with the ability to make decks by combining two classes, definitely offers more opportunities for variety and for more creativity in deck building. I’ve enjoyed building decks in Legends probably more than Hearthstone simply because I have much more freedom when it comes to how I want my deck to look like. Some combinations are, of course, better than others, but it’s still fun to build your own combinations and try out silly ideas. 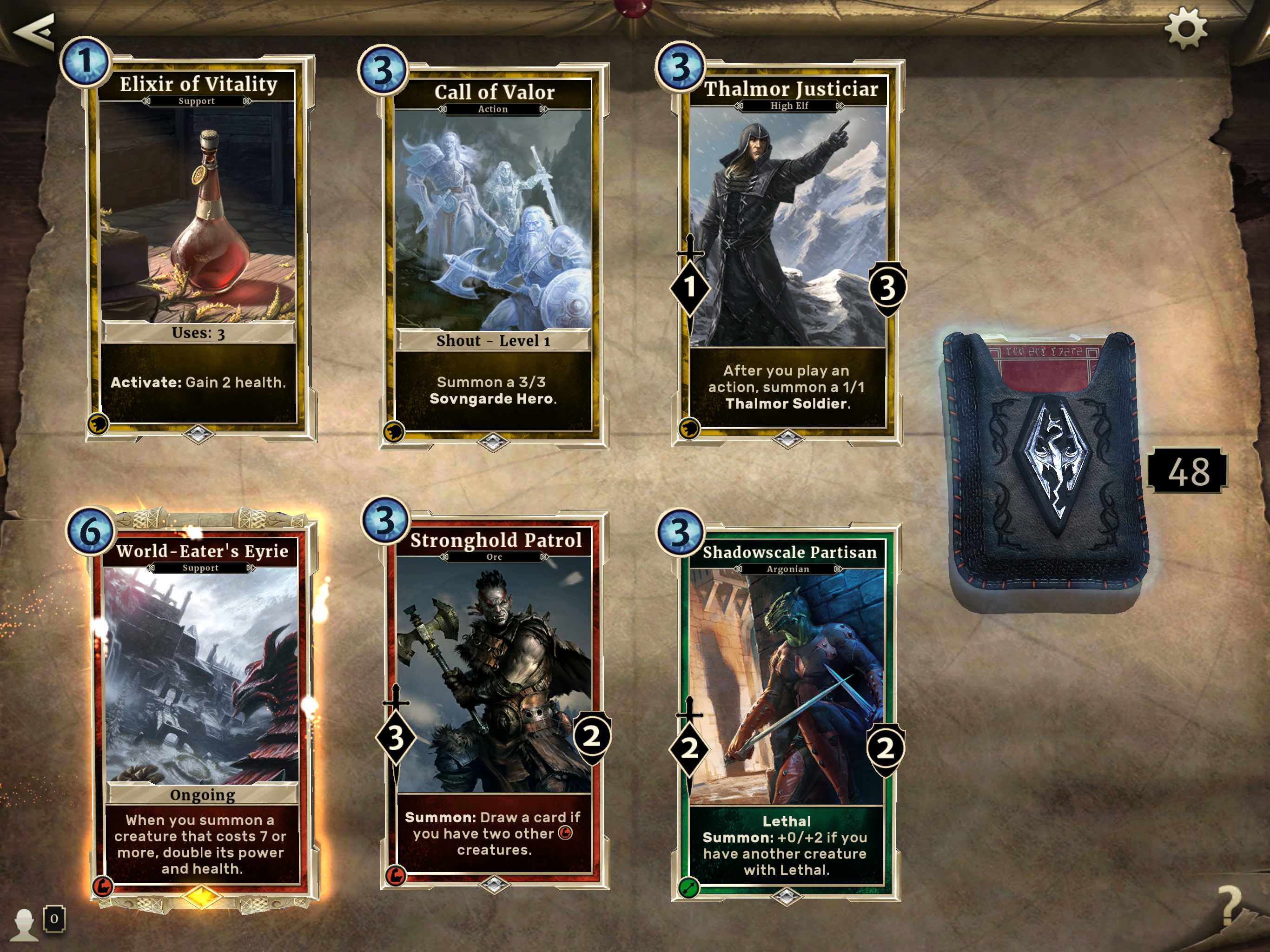 In addition to the attributes, Legends also lets you pick from one of ten Elder Scrolls-inspired races (Argonian, Dark Elf, Nord, Orc, etc). Each race corresponds to two attributes and a specialization; for instance, Dark Elves are all about Intelligence and Ability and have Last Gasp (equivalent to Deathrattle) cards. Your choice of race defines the kinds of cards you unlock as rewards and nudges you towards specific playstyles. I liked the race part because it once more infused more narrative into the game and was also a cool callback to the Elder Scrolls series.

As you progress in the game, you get new cards as rewards, and one of the fun parts of that is you often get two choices on how to evolve a card. The two versions will often have different stats and different keywords, so you get to pick the one that better suits the kinds of decks you’re trying to build. I liked this feature of the game because it helped differentiate the base card set and allowed me to have the kinds of cards that worked best for my playstyle.

It’s worth noting here that Legends‘ cards don’t have too many RNG-based mechanics, a fact that the game’s marketing department likes to bring up repeatedly. There are, of course, some cards that deal damage to random enemies or summon random creatures, but overall there’s not as much RNG as in Hearthstone, which can be bad or good depending on your preference. I personally don’t mind RNG in my games, so I don’t mind Hearthstone‘s RNG mechanics much. But if you are one of those who really like games that need skill more than luck, Legends might be a better proposition for you. The Skyrim expansion also brought Shout to the game, which have 3 levels of power and are fun to play around with. Other than that, most of the mechanics you’ll find in the cards are the kinds you’d expect in a CCG outside the Prophecy one, which I’ll talk about in a bit. 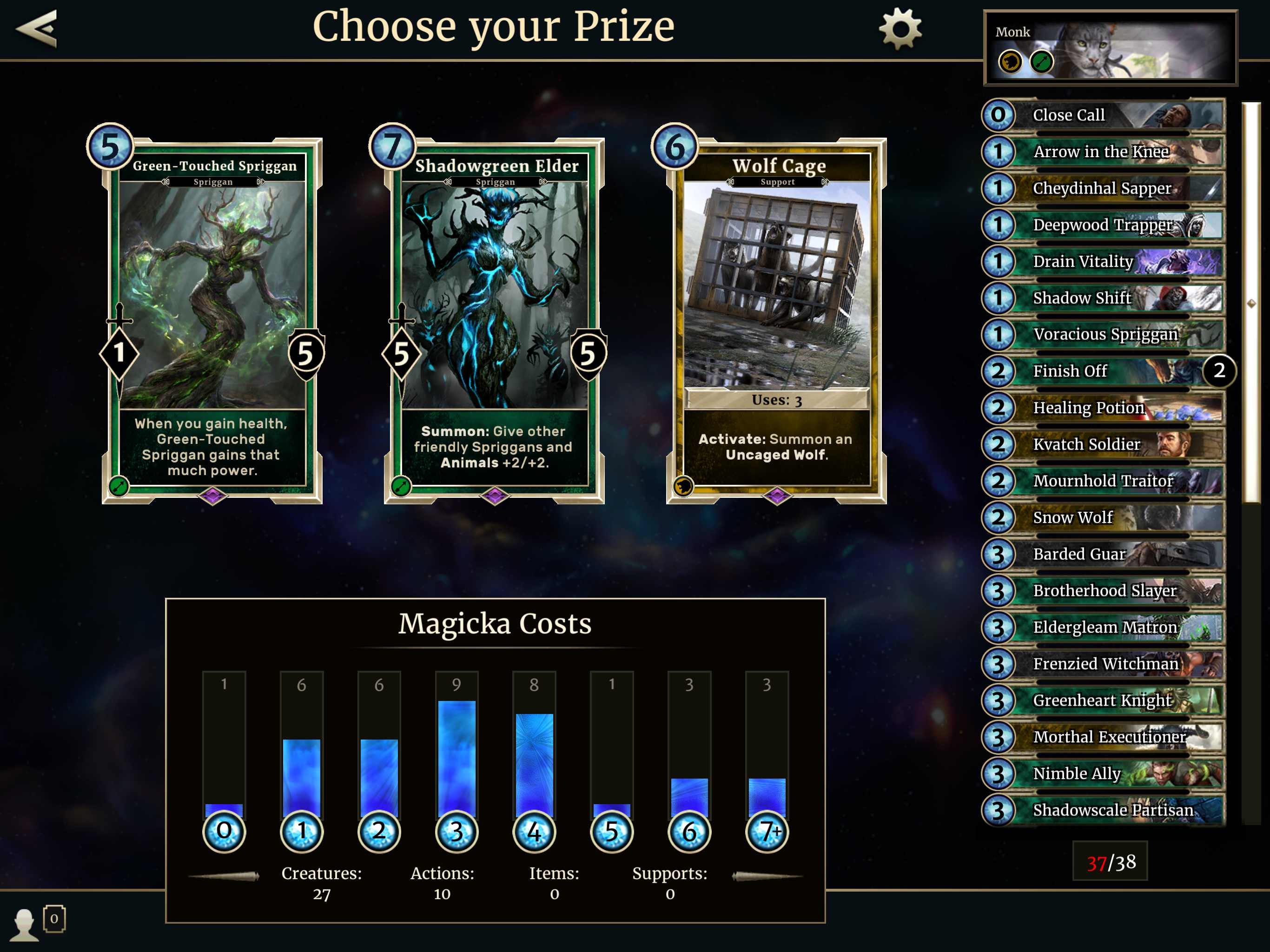 Finally, Legends also has Support cards, which stay in play for a specific amount of time and can either have limited uses (like transforming a creature into a random creature 1 times on 3 different turns) or are ongoing until removed. These support cards offer an additional deck-building dimension to the game and are also a great way to support (pun intended) the game’s narrative.

Legends‘ entertaining deckbuilding is also aided by the game’s two lane mechanic, which gives plenty of flexibility to the developers to bring some crazy ideas to the table (there are more than 20 different lane mechanics in the game currently). For most matches, the left lane is a regular one, but the right one (the Shadow Lane) gives cover to cards you play there, which means that for one turn they can’t be attacked. They are still vulnerable to spells and actions, though. In many of the campaign scenarios as well as in other special events, the lanes get all kinds of special rules, which are a very easy way for the developers to provide variety but also bring to the game a stronger sense of narrative. There are moments in the game where the two lanes allow for the creation of all kinds of interesting narrative situations. I’ve been enjoying the lane mechanic because of the additional tactical fold it brings to the game. And gameplay variety is never a bad thing in my eyes. 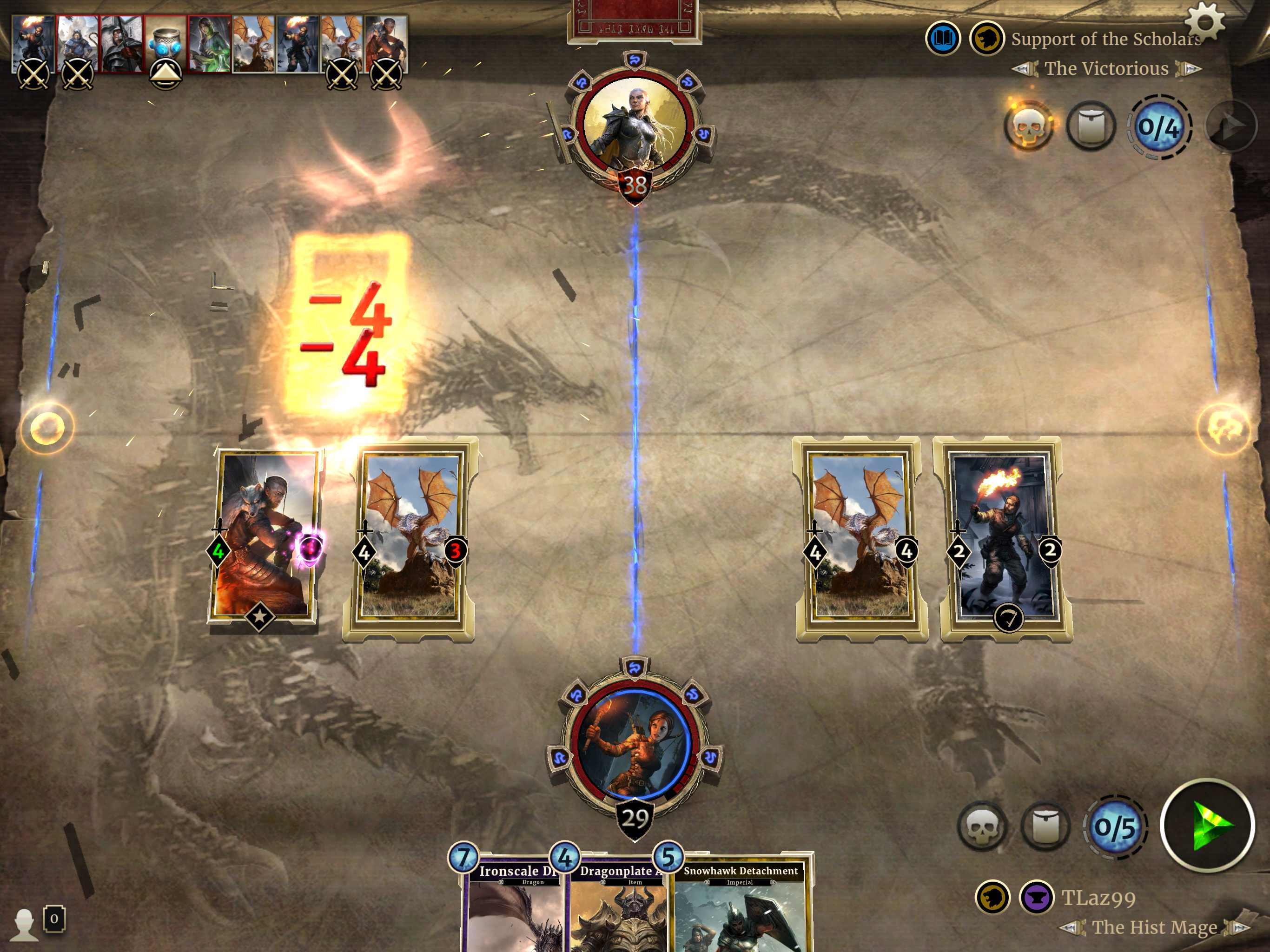 Runes and Prophecy (just like the two lanes) add another wrinkle to the gameplay and can help players come from behind, although in my experience they mostly just delay the inevitable. Every time you lose five health, one of the runes around your avatar breaks and you draw a card from your deck. If that card has the keyword Prophecy, you can play it immediately and for free. Prophecy cards offer the opportunity to play a card during your opponent’s turn, something that Hearthstone doesn’t really allow (outside Secrets). At the same time, you don’t get a benefit every time a rune breaks; the card drawn needs to have a Prophecy on it.

So, if you expect to be taking a lot of damage with the deck you’re building, you can load it up with Prophecy cards and hope you draw them at the right time. It’s a fun mechanic that forces players to think a bit more before going face because you’ll want to break runes when it’s best for you. And while it does introduce RNG to the game, it’s the kind you can plan for during your deck building. 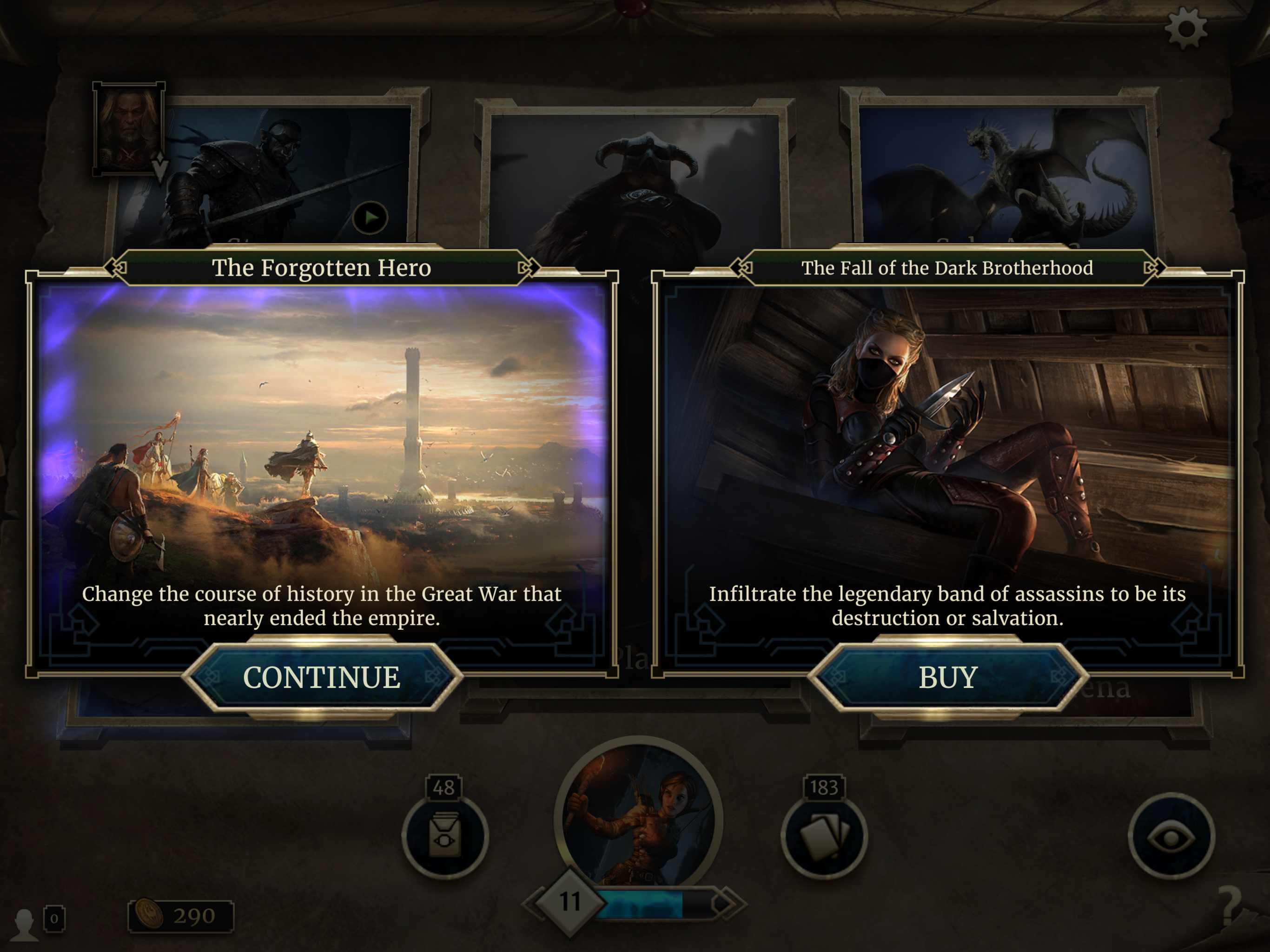 Legends has a ton of content to play through, with an extensive story campaign (plus the new Skyrim one that you can purchase separately either with gold or actual money) that comes with cutscenes, and two types of Arenas, the Solo and the Versus. And, of course, you also have your Casual and Ranked play. Solo Arena is a very fun mode that has you playing against 9 different decks plus a boss at the end until you beat them all or lose 3 times. You build a deck of 30 from 3 options at a time, but the interesting twist is that every time you beat an opponent, you get to add another card to your deck. I really liked this idea because I got to gradually improve my deck and patch any initial weaknesses. The Versus Arena is pretty similar to Hearthstone‘s Arena, and it works as advertised: pay 150 Gold or a Ticket, draft your deck (no adding cards in this one), and then play until you lose 3 times. 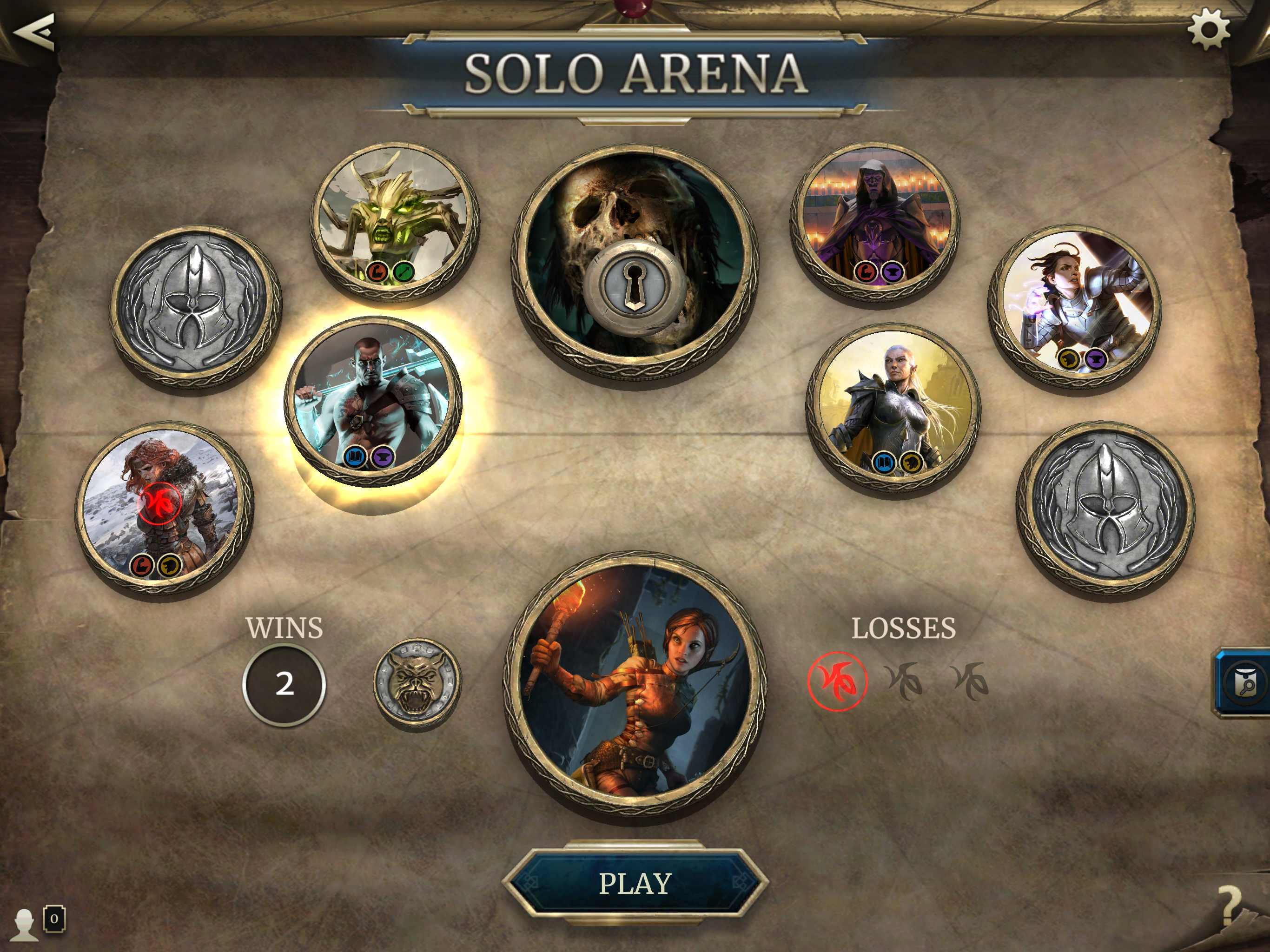 Legends is a very polished game with pretty intuitive UI and art that will remind you of Elder Scrolls games. Now, that means your typical fantasy art and muted colors, which are a bit lackluster when compared with the vibrant ones found in Hearthstone. While I like the art of the game, I do wish the colors popped out more because the whole screen can feel a bit drab sometimes since there’s a lot of muted brown all around. The UI is well designed, and I especially like how when you hold your finger on a card, you get information about any cards that might be summoned when you play it.

In general, Legends is very good at not presupposing that you know all the cards in the game, so it’s good at giving you all the information you need at that moment without having to memorize cards. And if for some reason you don’t remember what a keyword does, you can quickly check the in-game glossary, which is a great tool for those just getting started with Legends. Legends is great at giving you all the info you need within the game itself, and that makes it easier to get into than Hearthstone, despite Hearthstone being overall less complicated to play. 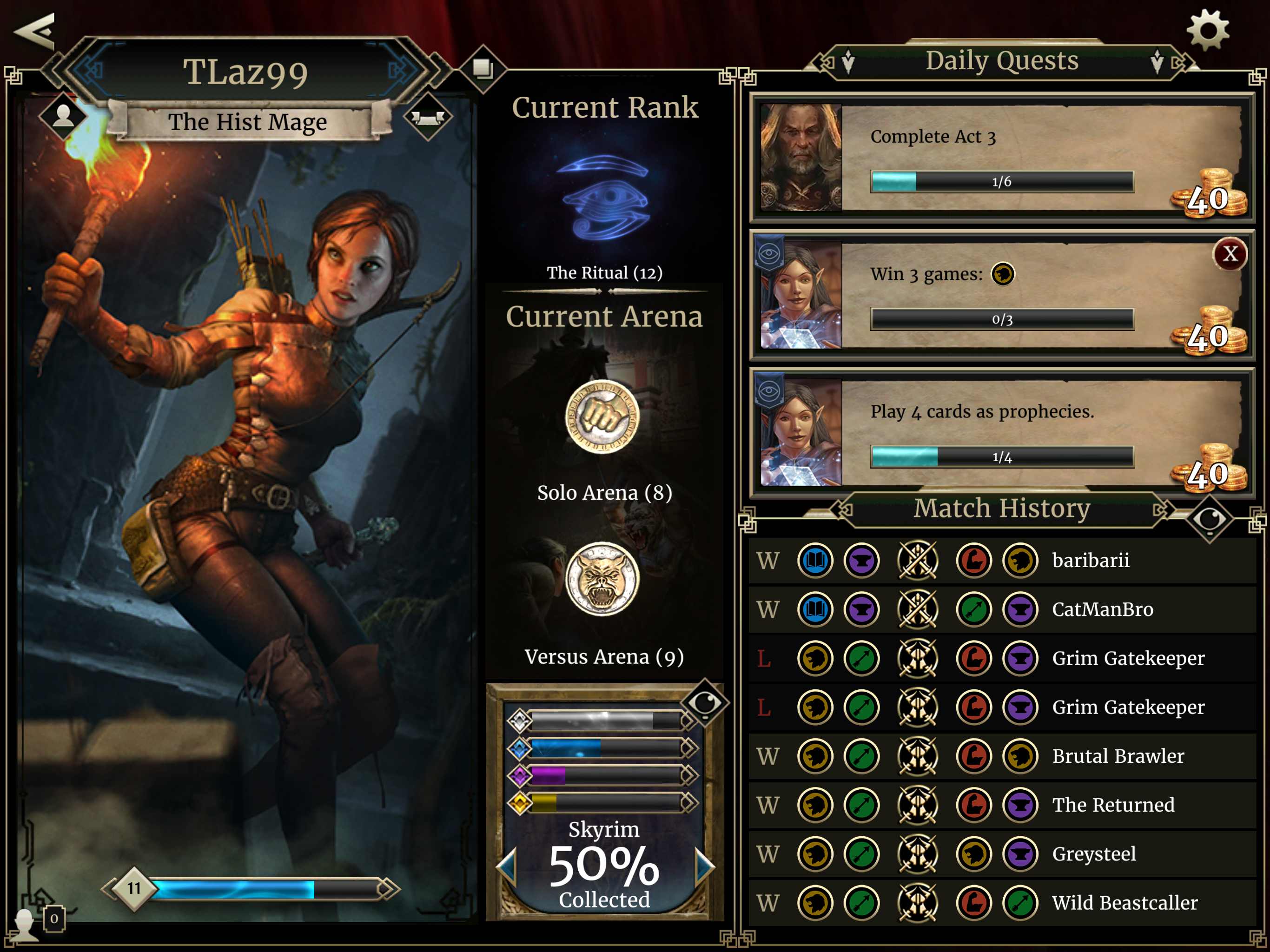 And I love that Legends remembers your match history and will tell you who you beat and who defeated you and what decks each of you was piloting. There’s also all kinds of other stats for you to peruse (most damage dealt in one attack, Imperial Grunts Summoned, etc). Finally, you also have Titles you can have underneath your name when you play, and they can be unlocked in different ways. For instance, you could be The Dragonborn, or the Mad, or the College Master Wizard. A small thing, but one that lets you personalize your avatar more.

Legends is a pretty generous game in terms of rewards, so it’s easy to start building a good collection without putting any money in it. You have your daily quests, of course, and rewards for beating chapters of the story and beating opponents in ranked and casual. The game is filled with little milestones that reward you with stuff (Soul Gems, which are the equivalent of Hearthstone‘s Dust, packs, and even whole decks). And if you watch The Elder Scrolls: Legends on Twitch, you’ll often get free drops, which is another fun way to build your collection. The game is still a free-to-play CCG, so if you don’t put any money in it, you’ll have to grind more. But overall I’ve been pretty satisfied with the game’s monetization and economy.

The Elder Scrolls: Legends is really good CCG that cleverly milks the Elder Scrolls universe and turns it into an entertaining card game. Legends feels quite different from Hearthstone both because of the Lane mechanics but also the two-attribute deck building that brings more variety to the game. The game’s Magicka (the equivalent of Mana) doesn’t stop at 10 like it does at Hearthstone, so decks that play for the long game can get to play more expensive cards more easily, which can be a lot of fun. I’ve been enjoying playing through the campaign and (being a Skyrim fan) playing with all the Shouts and the Dragons. While I’m not going to desert Hearthstone for Legends, I like jumping from one to the other since they give me different kinds of challenges and tickle different parts of the brain. Overall, Elder Scrolls: Legends is a card game definitely worth your time and one that has a lot of potential to get even better.