Hello, gentle readers, and welcome to the Classic Reload, the regular feature where we won’t stop playing until we reach an arbitrary goal. In each edition of this feature, we take a look at a game from the App Store’s past to see how it holds up in the harsh light of the present day. It’s a chance to revisit old favorites, reflect on their position in the overall iOS library, or simply to take a deeper dive than our reviews typically allow. As the person in the metaphorical hat, I try to choose a balanced selection of games to cover, but if you have something you’d like to see, don’t be shy. You can make suggestions by commenting below the article. Since the schedule is planned pretty far in advance, you may not see your suggestion soon, but rest assured that it will be added to the  master list for future consideration. 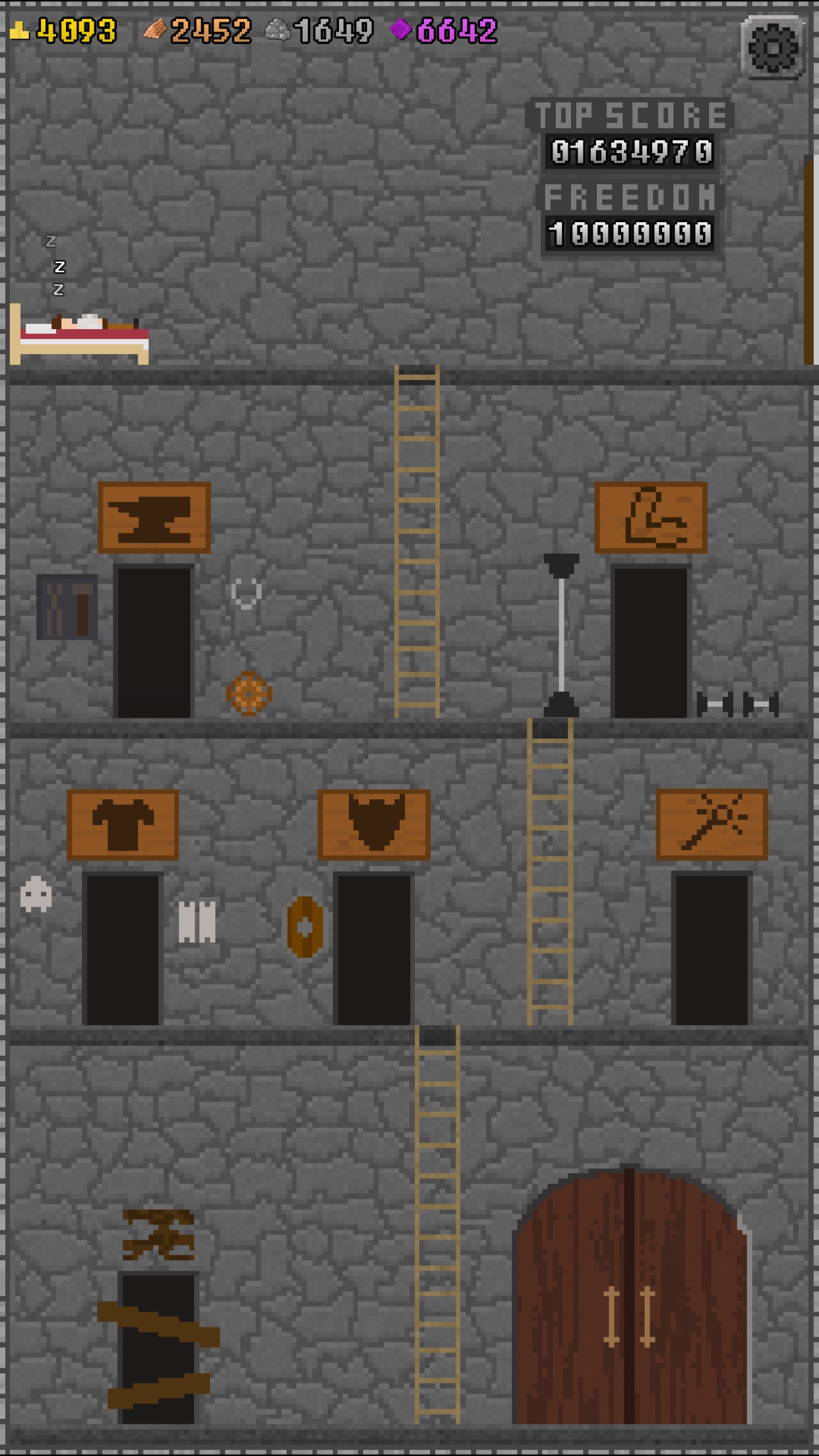 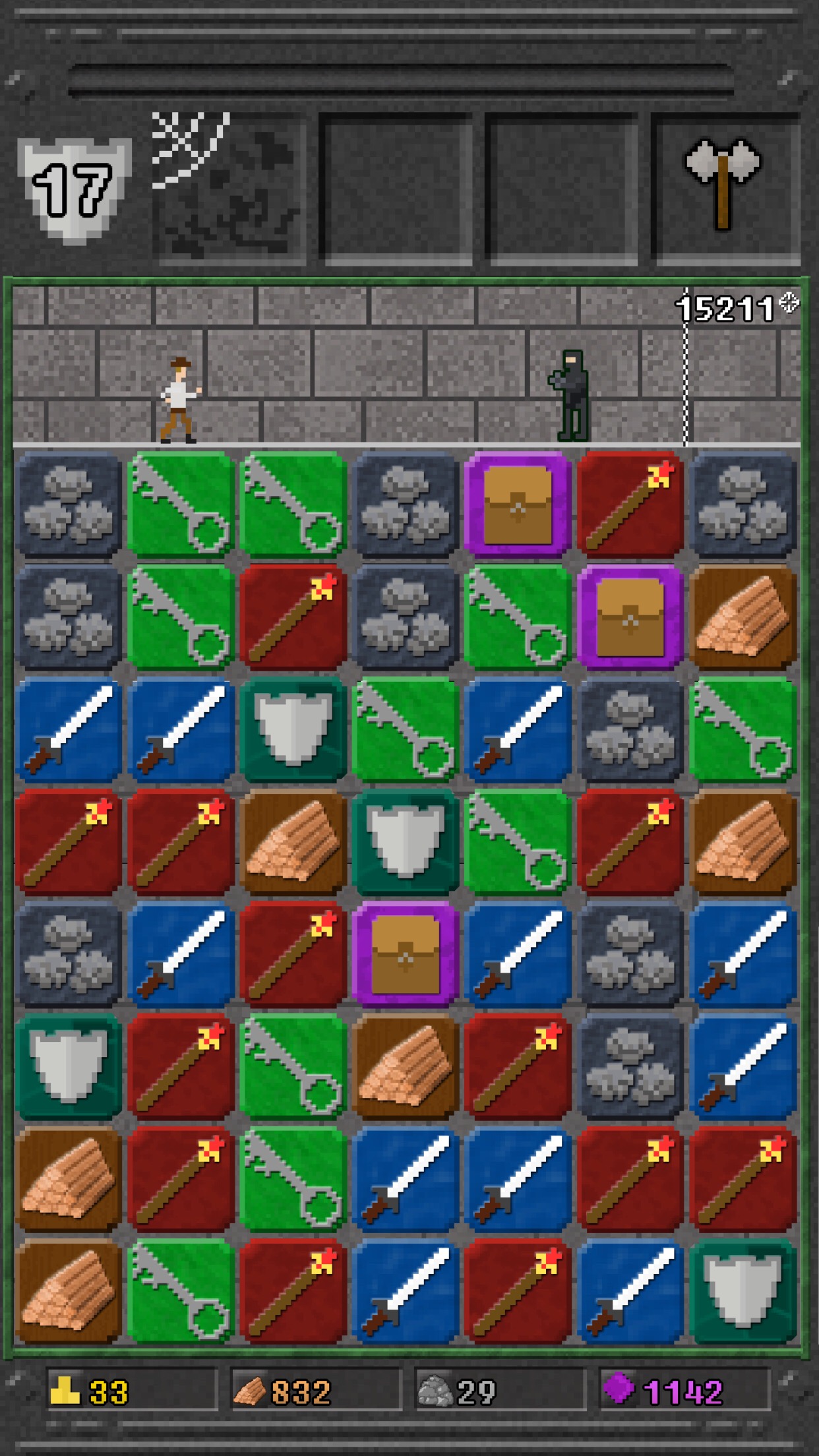 This time, we’re looking at one of my favorite matching games on iOS, Luca Redwood’s 10000000 ($2.99). Although the game has been superseded in many respects by its follow-up, You Must Build A Boat ($2.99), 10000000 remains a genuine classic from iOS history. Just before its fifth anniversary, the developer made his first update to the game since 2014, adding 64-bit support to ensure it survives the transition to iOS 11. That was as good a reason as any for me to download the game again and have another run-through from start to finish. It’s a fairly quick game if you know what you’re doing, so even the busiest of readers should be able to make time for another play. 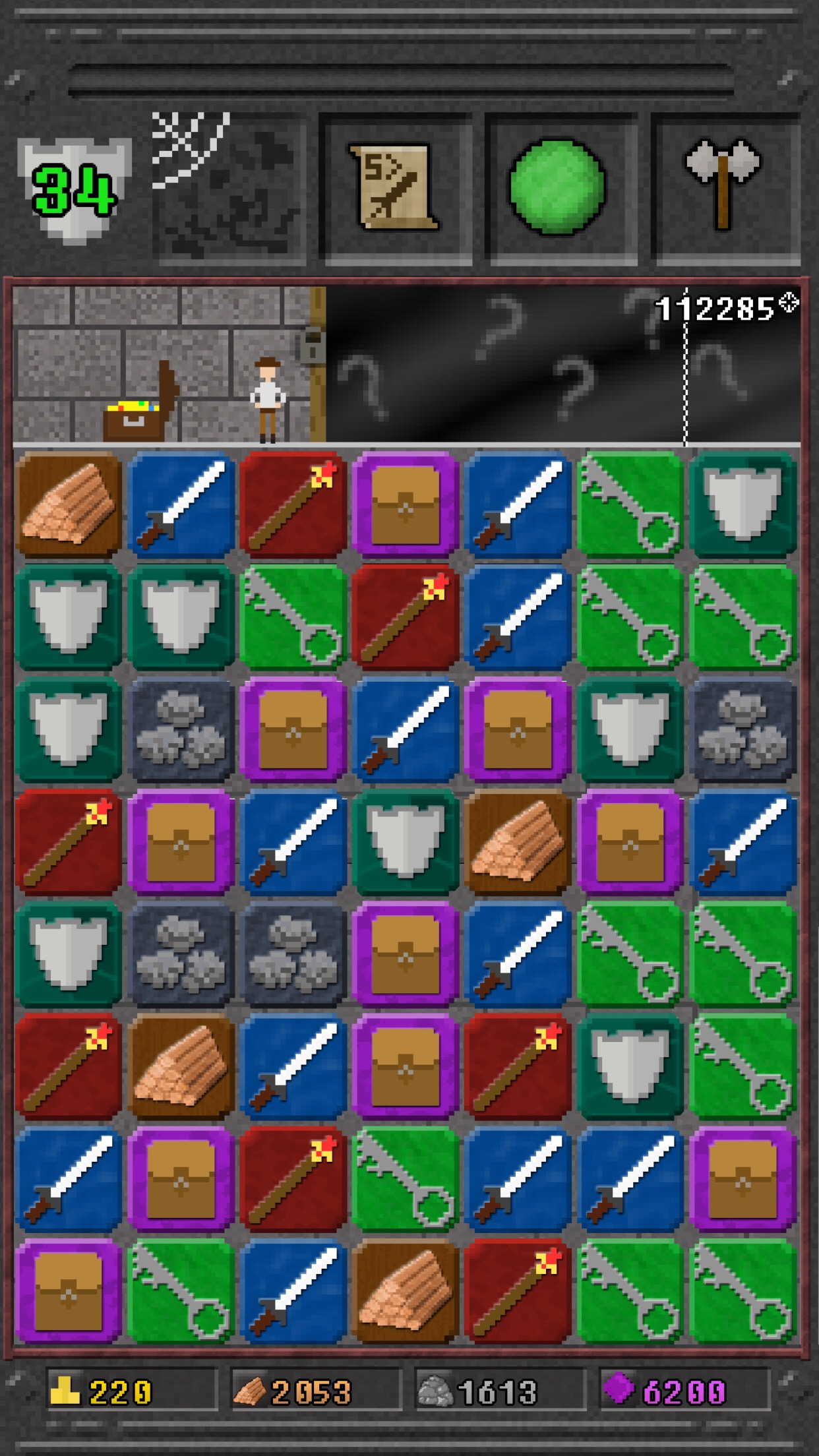 Unlike many of the games I tend to feature, 10000000‘s development history has already been well-documented at TouchArcade. A couple of years ago, Luca Redwood scanned many of his design documents for our Editor-in-Chief Eli Hodapp. Eli made an excellent summary that you ought to check out if you have a minute or five. The short version is that the game started off as a Fruit Ninja-inspired game where you slashed through rows of enemies with good timing to fend off their attacks. It soon evolved into something that looked a bit like Dungeon Raid before getting its final overhaul into the game you can play today.

10000000 released on July 25, 2012 and seemed destined to fly under the radar. Luckily, the lovely members of the TouchArcade forum glommed onto the game, bringing it to the attention of Eli Hodapp. Like everyone else, he practically couldn’t put the game down until he finished it. When he did, he wrote up a glowing review that seemed to contribute to the game being noticed in the larger iOS sphere. The game went on to be a huge success for Redwood, at least as these sorts of things go. Ah, the halcyon days when a paid puzzle game with no IAP could come out of nowhere and make a good go of things in the iOS App Store. Fortunately, the game’s sequel came with some name recognition behind it, saving it from being entirely eaten by Dave the Puppy and his vile minions. 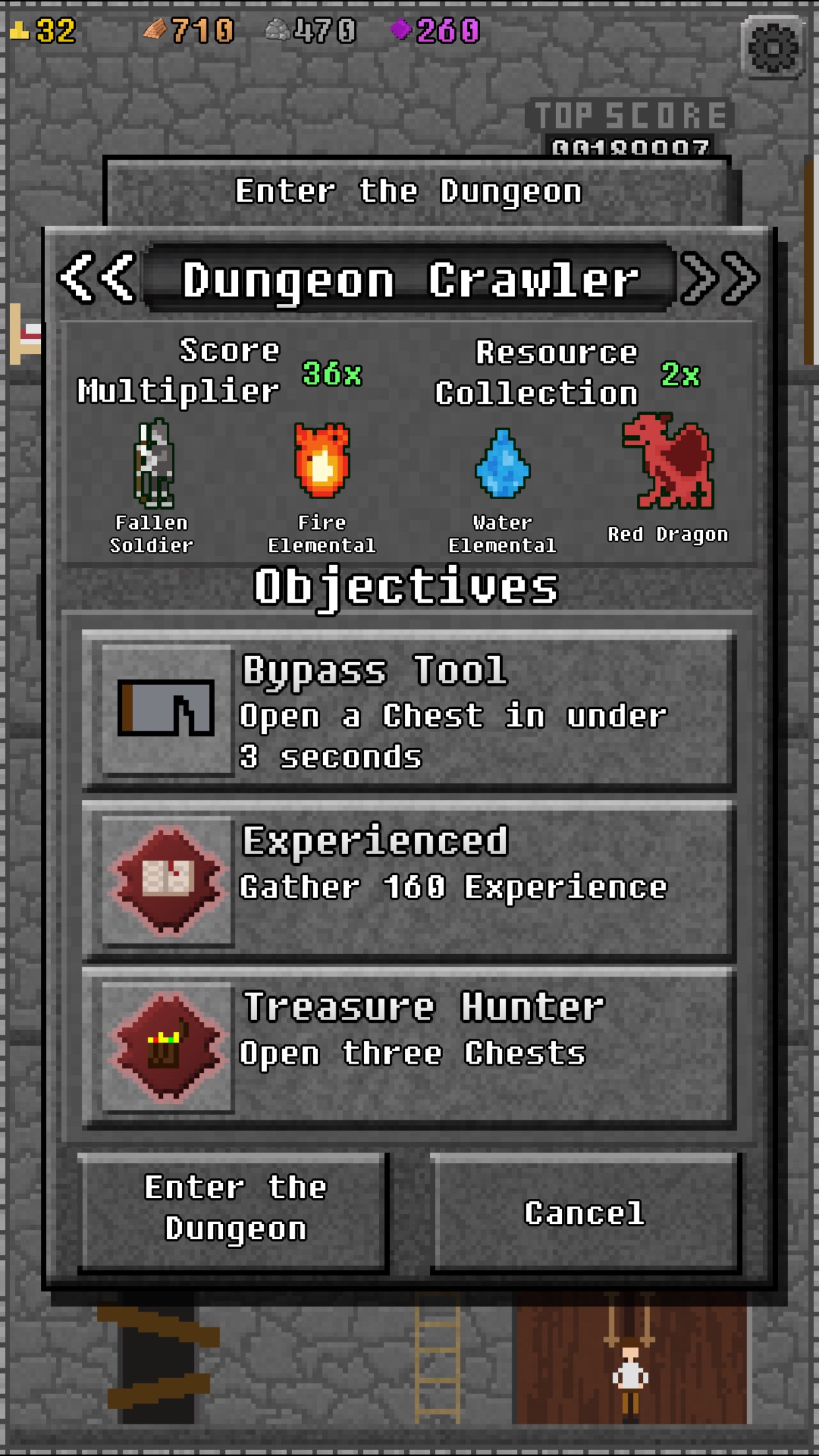 The first thing you see when you start to play 10000000 is a single-screen room with an occupied bed and several blocked-off doors. Etched in the upper-right corner are two labeled numbers: Top Score and Freedom. If this is your first time playing, your Top Score is of course zero. The number under Freedom? 10000000. It’s such a simple, elegant, brilliant way to communicate the goal of the game to the player. Tap anywhere on the screen and the occupant of the bed will hop out, revealing himself to be a Pitfall Harry/Indiana Jones-looking fellow. Clearly the sort that has seen some adventures and is likely to embark on more. If you tap on any of the six smaller blocked doors, you’ll get a message about needing a certain amount of resources to repair them.

There’s nothing for it, then, but to go through the big double-doors at the bottom of the room. Once your character makes his way down there, a display will show your current mission, which is to learn how to play the game. Tap on the button that says Enter the Dungeon and you’ll head into the main portion of the game. The tutorial consists of a few brief tips that give you a general idea of how to move forward, but the basic mechanics are spoken in the seemingly-universal language of matching similar pieces in groups of three or more. The board holds several different types of tiles: wood, stone, swords, shields, wands, keys, and bags. You can probably puzzle out that matching wood and stone will give you the resources that the broken-down doors were talking about, but the game tells you just in case. 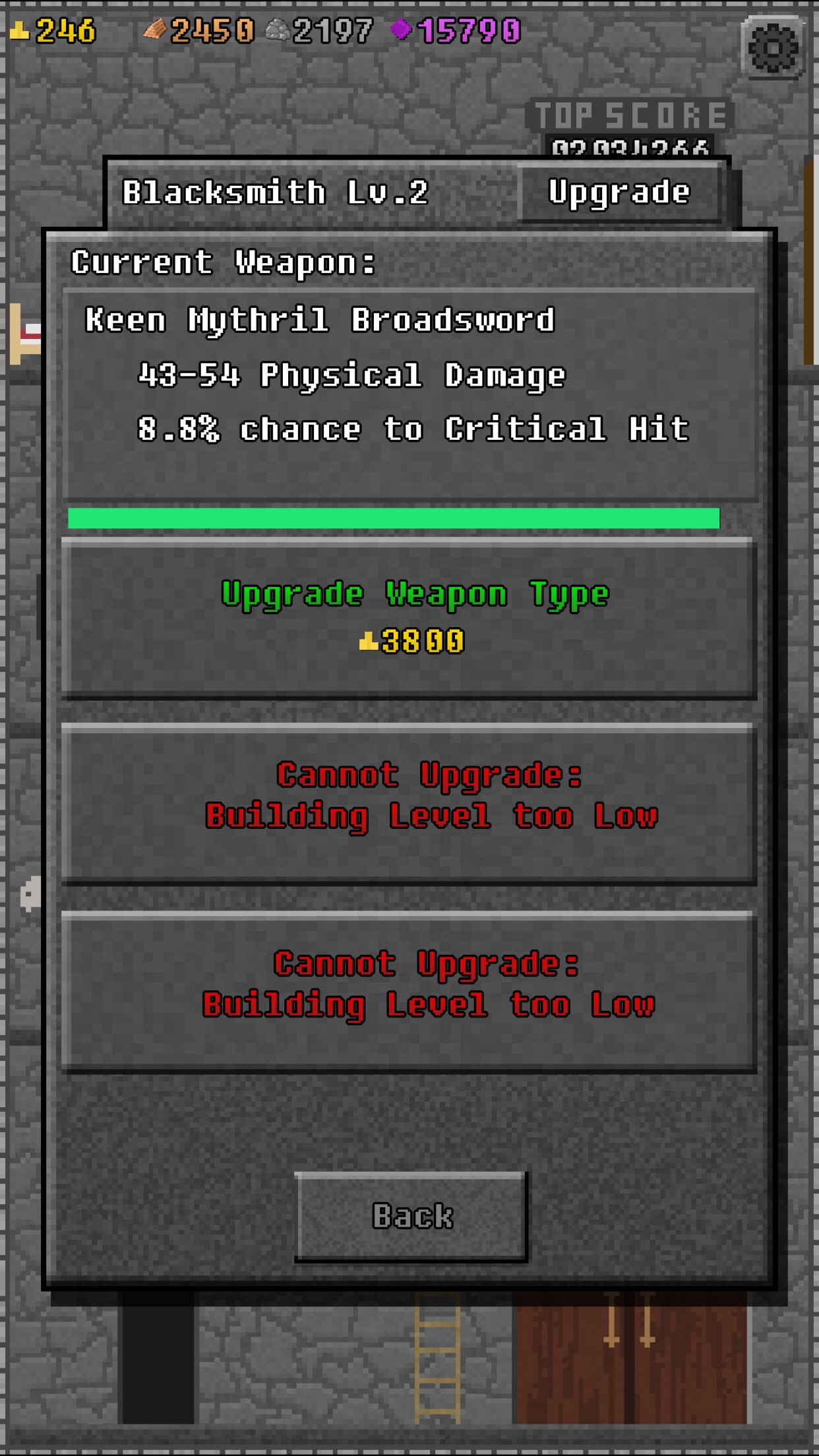 Before we get to the rest, though, we need to pay attention to what’s above the board. Your character runs down a dungeon hallway in the area immediately on top of the board. Above that area, there’s a shield icon and some boxes that will soon be filled with items. You don’t need to keep a constant eye on either of these areas, but you can’t lose track of them, either. Matching pieces willy-nilly is all well and good, but you won’t really get anywhere unless you match the right ones. Your character will come across monsters, chests, and doors on his way through the dungeon. All three types of obstacle will stop him in his tracks, and if the continually scrolling screen pushes him off the left-hand side of the screen, your run is finished.

Monsters can be dispatched by matching swords and wands to deal damage. Beating monsters will earn you some gold and experience, which will be important in a little bit. Matching shields will shore up your defense, which is important because when monsters hit you the screen moves forward faster. Chests and doors can be dealt with in the same way. Match keys to unlock them and move on. Chests will give you some cash or an item, while doors tend to mark off sections of the dungeon. That covers everything except the bag tiles, which can be matched to give you the occasional item. There are many kinds of items, including food that “heals" your timer, attack items, and so on. You can only hold a few at once, so you’re encouraged to use them frequently rather than stockpile them. 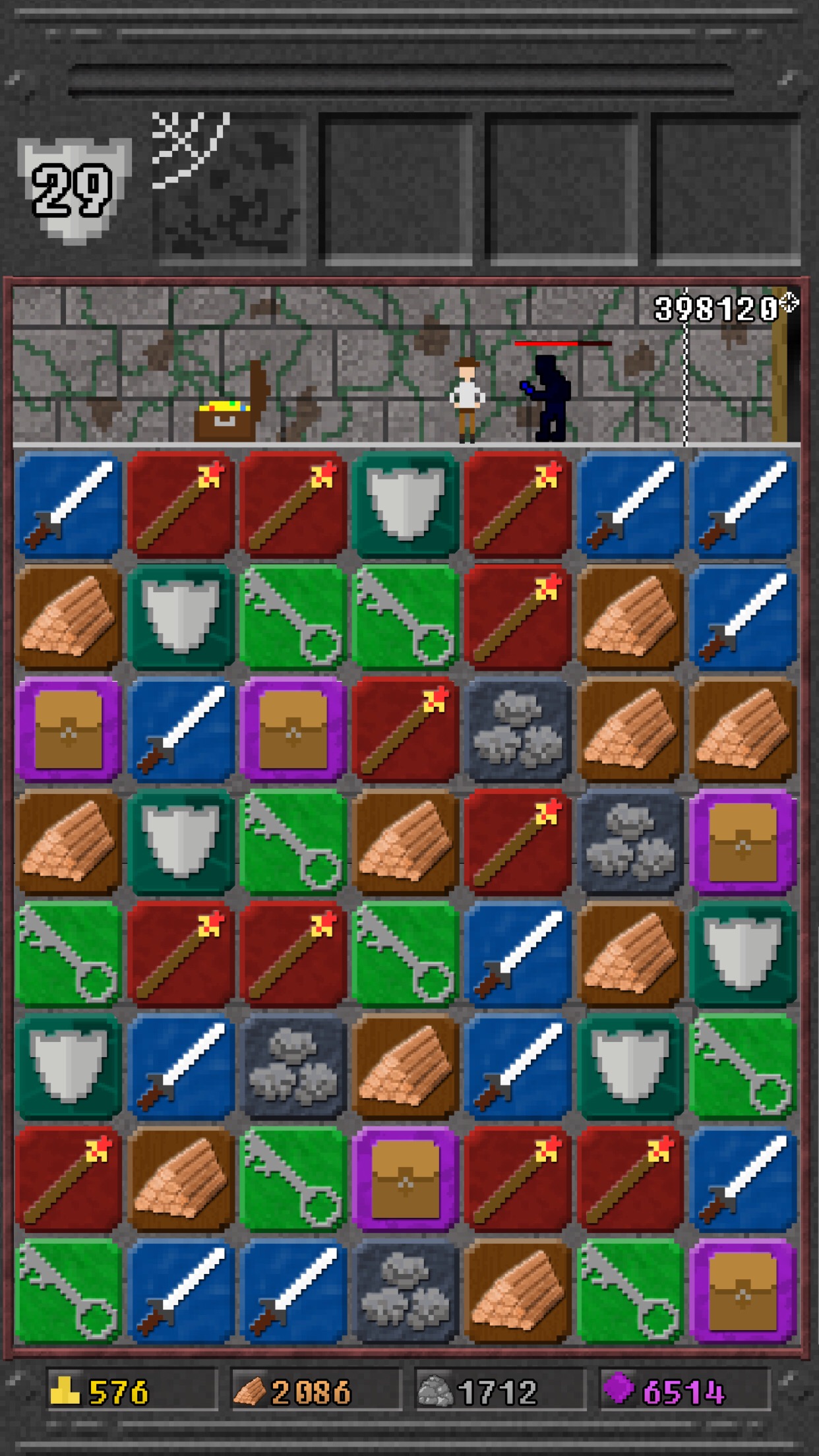 Generally speaking, that is. Certain goals are easier to accomplish if you hang on to certain items until you have the right mix. Unlike many other games that have a similar set-up, your inventory isn’t emptied out when you fail the dungeon. Next time you go in, you’ll still be holding what you had when you were struck down. More importantly, you get to keep all of the resources you gathered in your run. Wood and stone can be used to repair those mysterious doors, each of which becomes a shop or station to earn permanent improvements to your character. Gold improves your gear, while experience can be spent on some nice perks. The last door holds a potion shop where you can activate elixirs for some mixed effects. Each of these shops, save the last, can be upgraded themselves by sinking more wood and stone into them. And now we have our happy little treadmill, friends.

Head into the dungeon, go as far as you can, head back to the room, buy what you can, head back in and go a little farther. Repeat until you finally hit your 10000000 points and reach out to the sweet freedom that lay beyond. It might seem repetitive, and I suppose from an objective standpoint it is, but it works very well. The game doesn’t take too long to beat, and the upgrades do a great job of keeping you roped in for one play after another. The core mechanic of sliding tiles around Chuzzle-style has a nice feeling to it, and the simple scenes playing out above the field add a little spice to a very familiar genre. The sequel is a longer game, but it’s also more complex. For what 10000000 is, it ends at just about the right time. 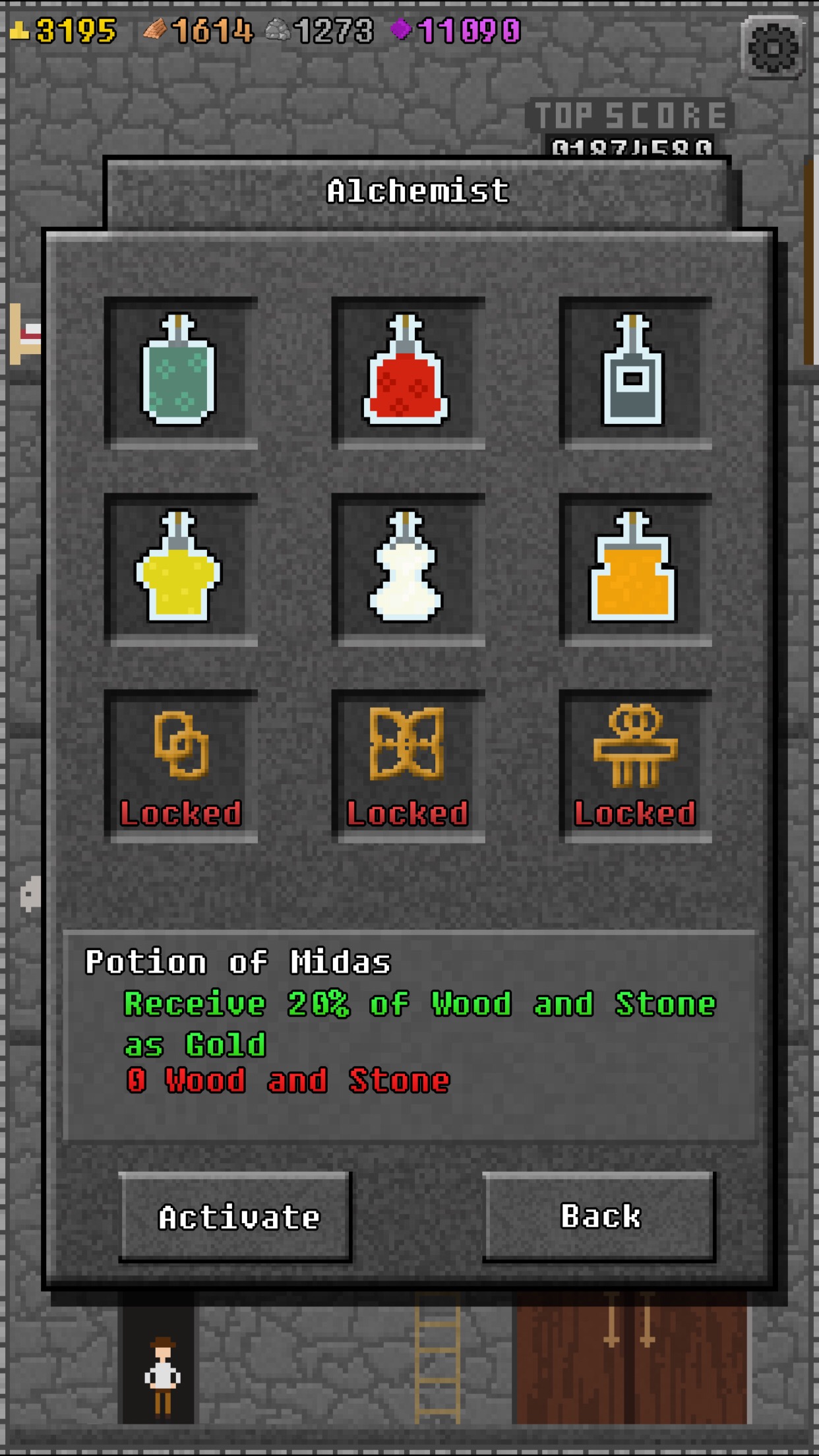 That’s not to say there’s no depth to it. Your victory may be inevitable, but you won’t get there mindlessly. Upgrades do eventually max out, so you’ll have to start paying attention at some point. Mostly, you need to make sure that you’re keeping the tile balance in a good place. Now, using keys when there are no chests or doors in front of you might be a waste, but if you have a board full of keys, that means you have fewer swords, wands, shields and such. So you might want to match particular tiles off the board now and then. The other thing to consider is trying to make combos, chains, and bigger matches. These all have their own benefits, and some are required to complete goals.

If there’s a place where 10000000 falters, it’s perhaps in its ending. To an extent, I doubt that could have been avoided. Gaining your freedom is the main goal of the game, and you’re constantly reminded of that. Through the whole game, you’re likely building up a climax in your mind, and it never really arrives. You’ll eventually tip over the needed score, and while you probably fought some boss creatures to get there, you may or may not have taken special note of them. Having earned the necessary score, another door appears in the now-familiar room. This one is different, however, as a beam of sunlight shines in from it. Make use of it and you’ll be treated to a still screen showing your reward, along with some nice credits and stats from your playthrough. It’s okay, but a bit anti-climactic.

Thanks to the aforementioned update, 10000000 still runs like a charm on the latest hardware and iOS version. If for some reason you haven’t played it yet, you really should. I’d also recommend giving it another go if you haven’t played it in a while. It’s a simpler game than others that followed in its wake, but there’s a bit of brilliance in that simplicity, I think. It only takes a few hours to get through, making it a nice nostalgic trip for a weekend or relaxing evening. Oh, and I almost forgot to mention the awesome theme song, which reminds me of some of the great European video game composers. I can’t even picture 10000000 in my head without hearing that tune play. It’s quite the ear worm.

That’s just my take on 10000000, though. What do you all think? I want to hear your comments, so make sure to leave them below the article. Any good memories, or thoughts on how it compares to its sequel? Oh, and a gentle reminder that the August RPG Reload Play-Along of Chrono Trigger is happening right now in the forums. Stop on by and join us, won’t you? As for me, I’ll be back next week with the next chapter of the Glossary series on action-RPGs. Thanks for reading!