Something about the writing style in Avatar of the Wolf ($4.99) almost immediately put me off. Most of the well-written gamebooks from Choice of Games have an almost velvety tone to their prose, gently massaging your brain and doing their best to make it comfortable. Avatar of the Wolf, by comparison, is thorny. The words feel shorter, less comfortable to read, and above all, aggressive. It’s even disorienting at times. The way this story is written does as much to set the tone as the meaning of the words the writer chooses. It was jarring to try to slide into the main character. Yet it turns out to be precisely the atmosphere this story needs. Avatar of the Wolf isn’t a fluffy tale of adventure that will appeal broadly, but give it time to spin its yarn and you might find yourself unable to put it down. 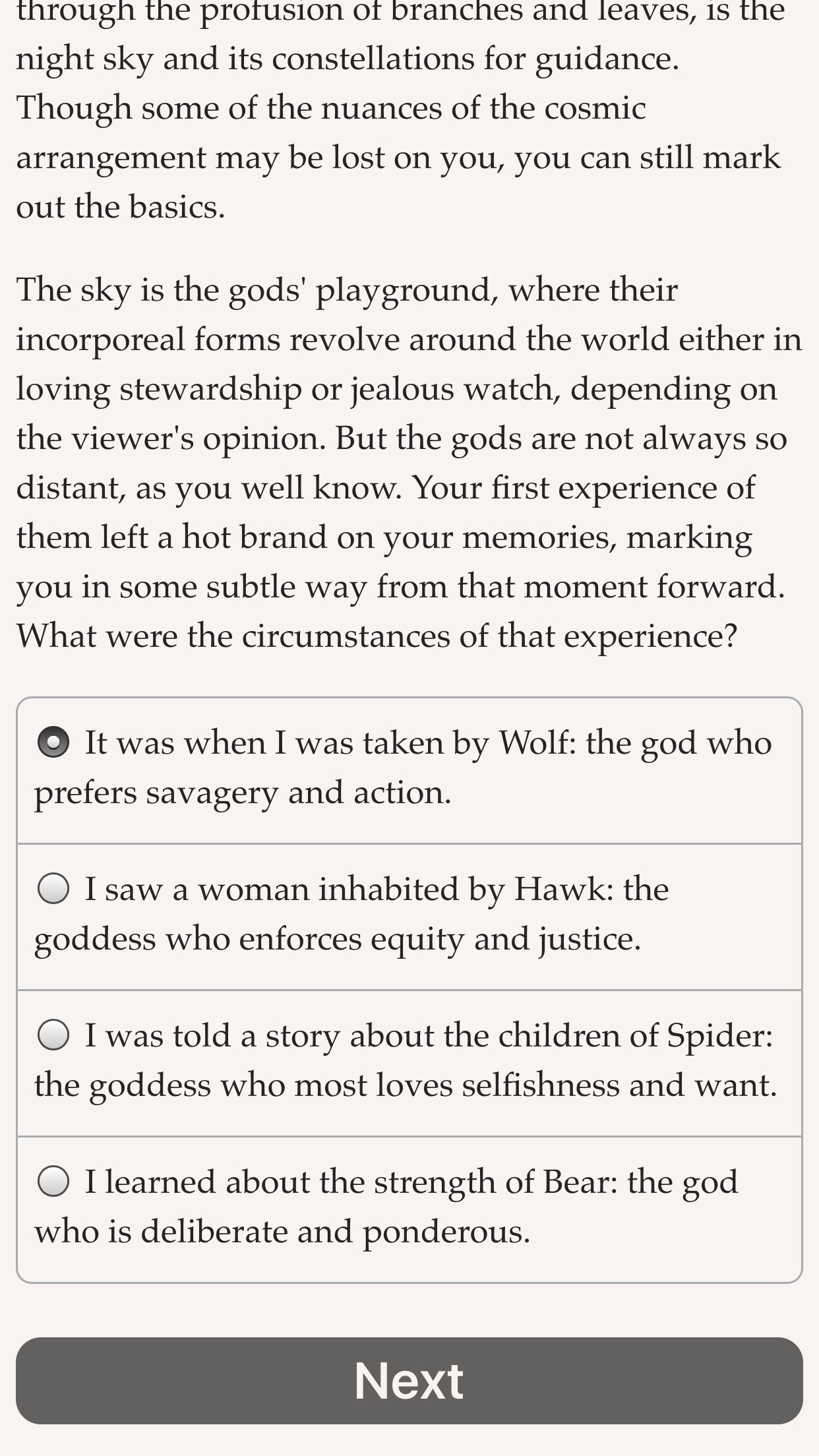 The beginning of the story is particularly confusing, as you have to learn about the world your character inhabits, what has happened, and set up your character’s details all at once. The game takes place in a world where a pantheon of gods has ruled quite directly over humanity for some time, even go so far as to inhabit certain individuals with part of their divine essence. Your character is one such person, an avatar of the Wolf. Oh hey, there’s the title. While you have to do Wolf’s bidding, you receive great power in exchange. There’s just one problem: Wolf has gone missing, and you’re the only one capable of finding out just what happened.

You’ll end up brushing up against the other gods and some of their avatars, along with a new player on the board, the Rising Sun. This group of heretics seeks to throw off the shackles of the old order of gods and usher in a new era of freedom for humanity. Though you are the Wolf’s avatar, you are free to throw in with or go against anyone as you see fit. Your actions will have great consequences for both humanity and the gods no matter what you choose. Will you seek peace, freedom, revolution, or pure anarchy?

Mechanically, this is a fairly straightforward ChoiceScript game. Some of the stats are a little hard to understand, but as long as you pick a style of character and make sure to play towards it, you should be fine. Making choices affects your stats, which in turn determines the success or failure of future actions. Waffle about too much and you won’t be able to do anything well at all. As usual, you can choose your gender, sexual orientation, and so on, allowing you to make the main character yours. The romance options are present but quite light compared to a lot of other ChoiceScript games. Your character is on a mission, after all, so sticking around any one place or person isn’t really on the agenda. 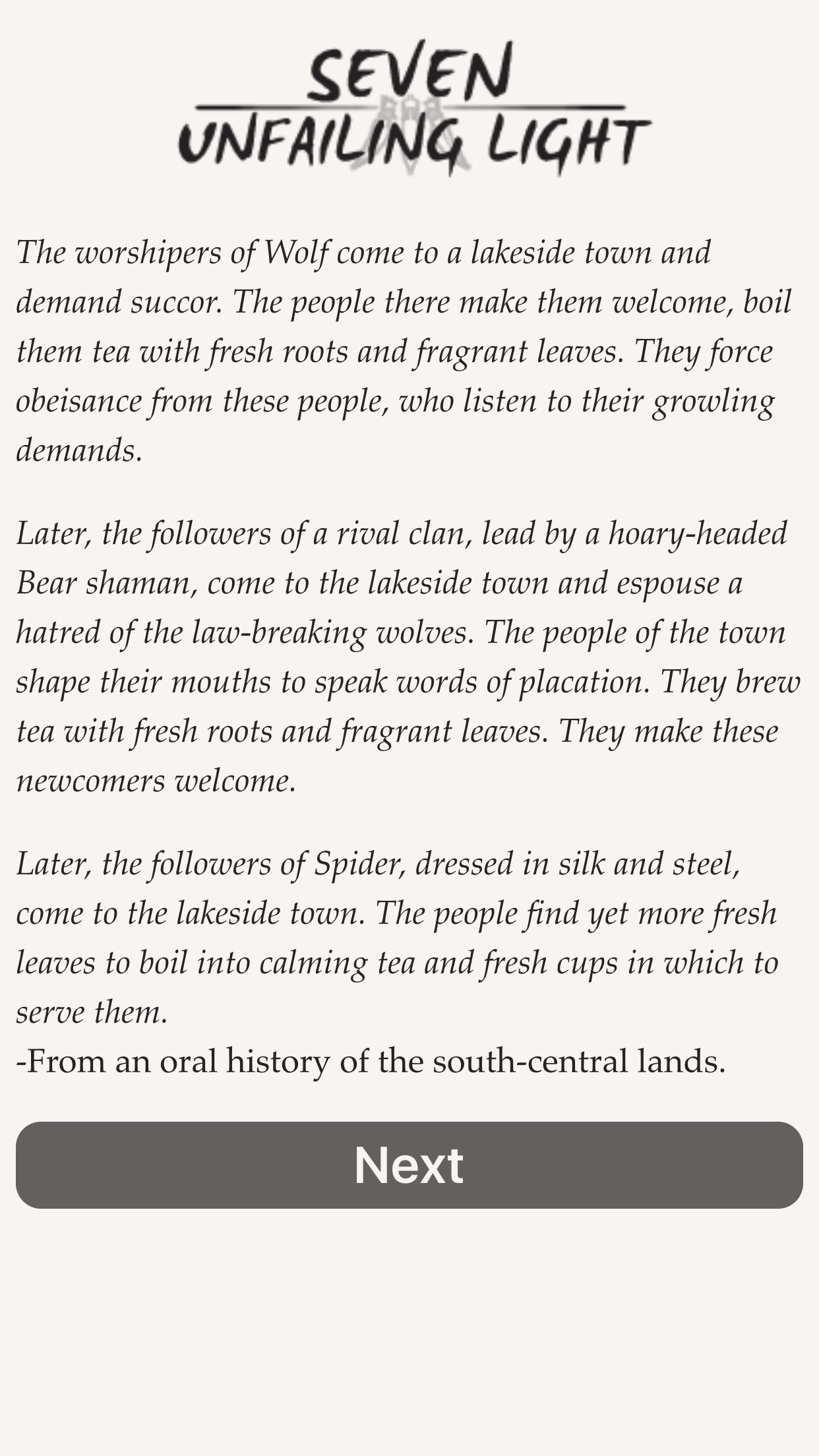 Many of the characters you’ll meet along the way are themselves avatars of other gods in the pantheon. They all have their own agendas, so you’ll have to decide how well their goals align with yours and whether or not you trust them. Wolf didn’t exactly get along cordially with all of his siblings. Which, you know, you might expect from a wolf. The values of the other gods need to be carefully considered when dealing with them or their proxies. That is, if you care about their values. You can also just do the wolf thing and not really care about what others want or need. There are a lot of paths to take in this one. Even if you play aggressively, you can decide just how bloodthirsty you want to be. It feels like the game is always pushing you in the more lethal direction, but you can absolutely ignore it if you like.

This gamebook relies heavily on action, and as a result the characters are a little weaker than some other ChoiceScript games. Strangely, that made Avatar of the Wolf feel somewhat fresher than many recent games of this type. Not that having weak characters is a good thing, mind you, but the fact that the action and situations were strong enough to carry the story is admirable. That prickly writing style that felt so off-putting at the start turned out to be perfect to describe the behavior and actions of a force of nature like your avatar character. It makes sense that your thoughts are a bit scattered, and that you’re prone to only thinking a couple of steps ahead at any given moment. This isn’t a story about long-term goals or cool heads, really. It works.

Avatar of the Wolf is a tough one to nail down. It has a lot of weak points, but I still found myself in its thrall for the duration of the story. I really appreciate its speedy pace and nearly single-minded focus on the main plot. I also feel like the character had really good reasons to treat others like they were expendable or unimportant, a convenient bit of cover-up for an element many ChoiceScript authors struggle with. I’m not sure I’ll remember Avatar of the Wolf for a long time, but I certainly had a lot of fun with it in the moment.