And we are back this week with our weekly Hearthstone (Free) roundup, and what a week we just had. After hearing many rumors about Death Knights, we finally got to hear the official announcement for the next expansion, and it’s Knights of the Frozen Throne. Every WoW player is very excited about the upcoming expansion given the lore behind the Lich King, and it looks like it’s the right kind of expansion to draw many lapsed players back in. As you’ll read below, the expansion brings some new ideas that will change the way the game is played. Most of our news stories and videos today are about the new expansion, so go grab a cup of coffee and head to the Frozen Throne.

Knights of the Frozen Throne is the Next Expansion

We finally know the name of the next expansion: Knights of the Frozen Throne. And this one looks like it’s going to be great fun. As we wrote about, the design team once more took what the community has been asking for and implemented it in a way that makes perfect sense for the game. Everyone has been asking for a Death Knight class, but it would have been very tricky to do so given all the previous expansions with no Death Knight cards in them. So, Blizzard got around those issues by giving us Hero Cards, cards that operate a bit like Lord Jaraxxus and replace your hero with a powerful—and undead—equivalent. The new cards that have been revealed so far have a strong emphasis on Deathrattle and also introduce Lifesteal, a keyword that allows minions to give you life when they do damage.

As is always the case, there’s a pre-order deal that lets you get packs and a card back, which should be a much better deal than previous pre-orders because of Blizzard’s “no (or few) duplicate cards." The expansion launches next month, and we’ll be getting more information about cards soon.

The Known but Unknown Cards

The cinematic trailer for Knights of the Frozen Throne had some cards we haven’t yet heard about, so this article is speculating what they might actually be. There’s a 3 Mana 2/2 that’s going to be a Crypt Lord and could be Underking Talonox. The 5 Mana 5/4 is probably a Val’kyr, and while the closest match in terms of colors is Svala Sorrowgrade, the writer isn’t sure who this one might be. The 4 Mana 5/1 is a Death Knight but no idea which one it could be, the 3 Mana (no attack or health known) is probably another Death Knight, and the amazing 3 Mana Shark Bear looks more like a Sharknado accident than a new card. Any ideas who those cards are?

Deathstalker Rexxar is going to give us some crazy minions all stitched up together, and this article goes through some of the possibilities. Keep in mind that each beast must cost five or less mana so that the resulting minion doesn’t cost over 10, and the first beast will have text on it while the second is either vanilla or only has keywords. There are some fun ideas like Rat Pack and Ironfur Grizzle, which has Taunt and a Deathrattle that summons a number of 1/1 Rats equal to this minion’s Attack, Angry Chicken plus anything that gives it a bigger body, and many others that you can see here. Fun times ahead.

This article goes over the new Hero Cards that will switch with your hero, provide you some armor, and give you a whole new ability. It could be great fun to play with, and the Hero Powers should be more involved than the kind you would get when playing Justicar Trueheart. Excited about the Hero Cards?

Warcraft fans are very happy about the new of Knights of the Frozen Throne coming to Hearthstone, and this article explains why. It talks about how Icecrown Citadel is the final raid in WoW‘s second expansion, Wrath of the Lick King, but also how Icecrown Citadel represents the culmination of a story that started in Warcraft III a long time ago. He then goes on to talk about Warcraft III‘s lore and legacy, how it led to the Lich King, and in general all the lore behind this expansion. He believes this theme can make for a great expansion and can fit some of the ideas of the Icecrown Citadel raid into Hearthstone.

New No Duplicates Rules Will Work With More than Just Packs

As you probably remember, Blizzard came out recently and said you won’t be getting any duplicate Legendaries in your packs from now on, but that rule goes further than we knew. According to this story, you also won’t be getting any duplicate Legendaries in cards you get either from the Arena or from Missions (like the ones coming in the Knights Expansion). That’s great news that should help players build better collections for cheaper.

In a recent interview, Disguised Toast talked about the latest expansion among other things, and he said that he’s excited about Death Knights coming to the game—since it’s something the community has been clamoring for—and he feels it will be cool to finally play some Death Knights, especially since he’s a WoW player. He thinks the way Blizzard has gone about adding Death Knights makes sense because adding a tenth class would lead to balance and UI issues.

He sees a possibility that the new cards might make some of the Un’Goro quests stronger and more playable. He also thinks Blizzard has learned its lesson with Deathrattle minions and knows what kind of minions not to make. And he’s excited about Deathstalker Rexxar because of all the possibilities it creates. He talks about the expansion in more detail (and about Hearthstone in general), so check it out here.

This interview with Lead Mission Designer, Dave Kosak, and Senior Concept Artist, Jerry Mascho, gave us a few more details on the new expansion. They talked about how the theme came about, what the motivation was to visit Icecrown Citadel, how the art came about, and more. It’s a great article that talks in detail about the design approach, and it’s definitely worth a read. 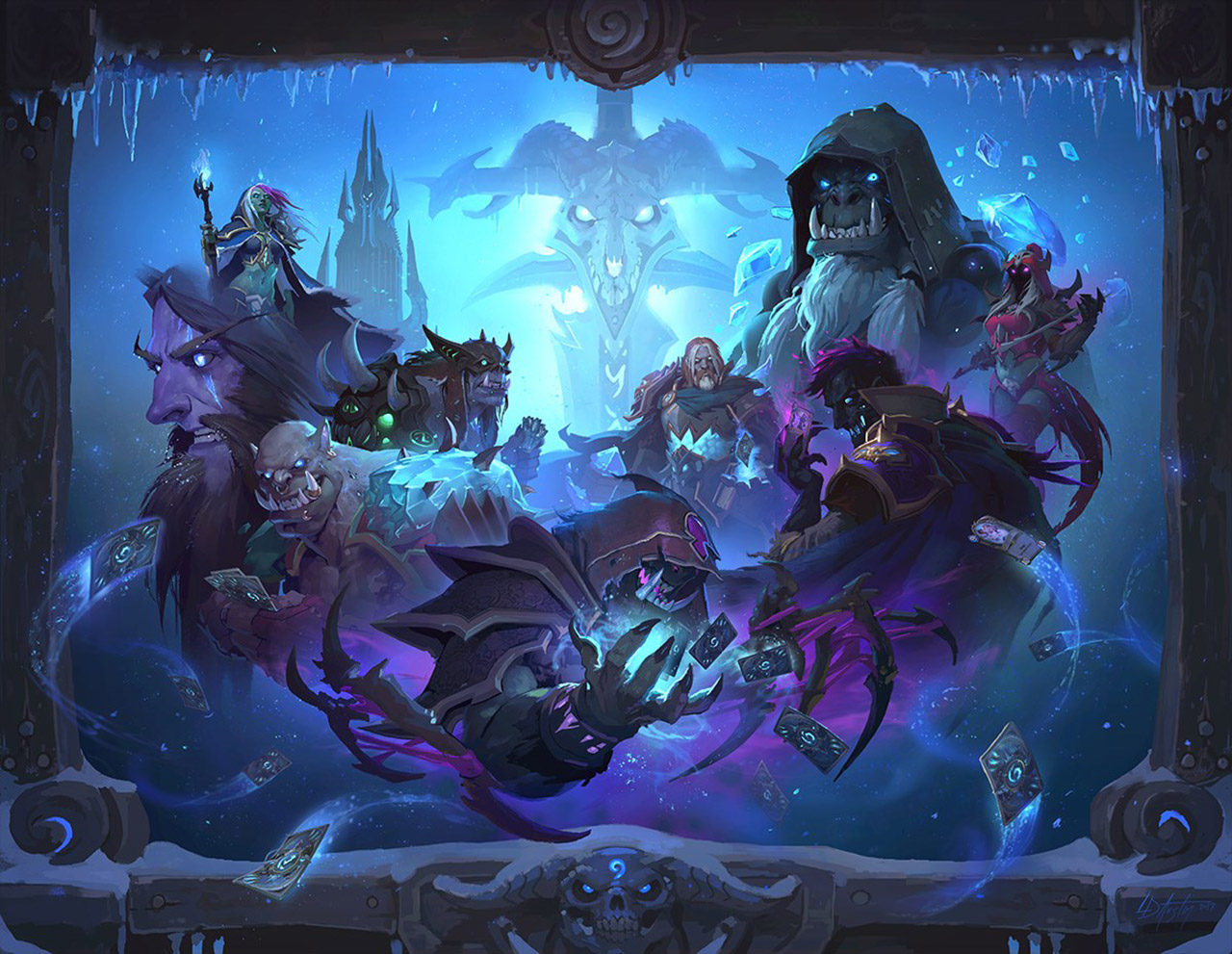 This very old interaction allows a chain reaction that ends up killing you when Mistress of Pain does a single point of damage, but that will change soon and the effect will only activate once. Mistress of Pain’s text box will change to say Lifesteal after the expansion (since that’s what her ability was anyway). When the next expansion hits, then, Auchenai Soulpriest’s ability will only trigger once when interacting with Lifesteal minions.

Old Expansions are Returning to the Store

Blizzard will be bringing back into the store old card packs and Adventures that now reside in the Wild. Specifically, in the coming weeks all Wild Sets will be available for purchase on the Blizzard Shop, which is great news for some newer players who didn’t have a chance to play Adventures like Blackrock Mountain or League of Explorers. Any Adventure of packs you’d like to get your hands on?

Alb987 Is Your First Wild Champion

After some fun and wild (pun intended) matches, self-proclaimed Wild expert Alb987 became the first Wild Tournament winner, expertly piloting his Pirate Warrior in the last match to beat Jesse “Control" Chrysler. The Wild tournament was an overall success and hopefully gave a nice boost to that side of the game. If you want to read more about the tournament and check out the decklists, go here.

Knights of the Frozen Throne Reaction