The first Monument Valley ($3.99) was a landmark game on the App Store, a title that brought a fascinatingly gorgeous experience to mobile gaming. Yet, I thought there was something lacking from it: it wasn’t a particularly difficult game as far as challenge goes, and while the story had some poignant moments, its abstraction perhaps was too disaffecting from the story the game wanted to tell. But certainly, critics of the game are in a notable minority, as the game has become one of the top-selling mobile games of all-time, spawned many imitators, appeared on House of Cards, and caused many people to fall in love with the characters from the game. So the sequel Monument Valley 2 ($4.99) is in an unenviable position where it has to try and recapture that magic of the original. And to a certain extent, it does: it’s still a gorgeous game, and Ustwo are the masters of their craft at putting Escherian impossible geometry into a game experience. As a delivery vehicle for some gorgeous colors and landscapes, Monument Valley 2 is once again a success. As a game, and even at times as a story, Monument Valley 2 falls a bit short. 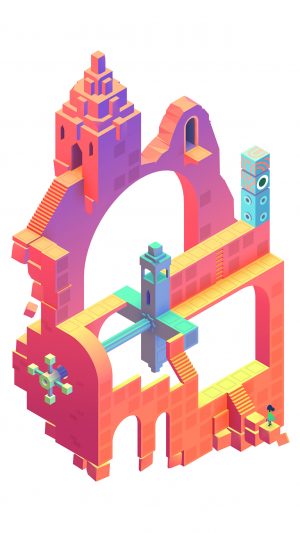 This sequel doesn’t feature any kind of narrative connection to the original game beyond thematic elements. There is one moment where the game tries to rekindle fond memories of the original while still being new, and it works quite well. I’m being vague so as to not spoil it. This game tells the story of Ro, and her unnamed daughter. The daughter not having a name seems like an odd choice, and one that seems obfuscating more than the benefit of making her a nameless symbol accomplishes. This isn’t just a story of a child growing up, it’s also one of motherhood, and watching your child grow, becoming their own person, and learning to let them go. Yet, it still sees the mother as their own person, and someone with their own experiences – their life isn’t over just because they’ve finished raising their child to adulthood. The application still seems very hands-off, and good luck trying to figure out the connection of the story of Ro and daughter to the magical acts they’re undertaking along the way. Which, themselves have an interesting customization aspect, as you create magical sigils at the end of each level, and can create unique patterns for each one to include with your screenshots that you take of the game.

The puzzles lack things like the crows from the original game, so it’s just you solving the environments through rotating and manipulating certain objects. Ro and her daughter – who has the cutest bounce in her step – play roles, in that you often have to account for each character depending on the puzzle you’re solving. Again, being vague so as to not ruin the experience for those who haven’t played, the role that Ro and her daughter each play in the game changes over time, and your relationship to control of the characters changes, too. As far as challenge goes, it’s not very difficult. It’s still a rather compelling game, and if you like your puzzles to throw just mild resistance at you so you can feel like you’re progressing without putting in too much in the way of blood, sweat, and tears, well, this is the game for you. It’s definitely a game friendly enough for casual players. 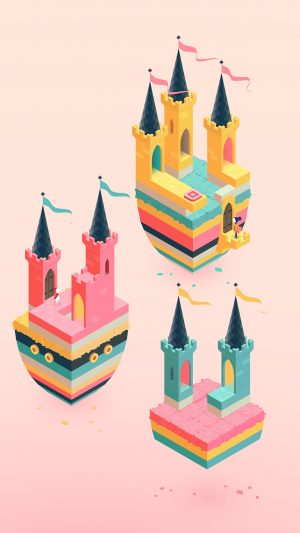 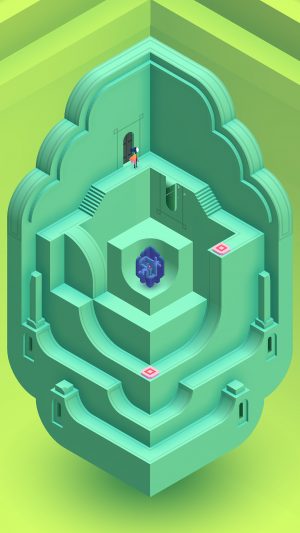 Once again, Monument Valley 2 is an absolutely gorgeous stunner of a game. Ustwo utilizes a similar M.C. Escher influence, and a similar set of pastel colors as the base of the world. But they are willing to take some risks with the coloration and artistic approach. Some of the coloration starts to take on new hues that you might not have seen before, that still feel like they fit, but definitely expand on what the game is known for. A particularly cool sequence deliberately plays with making the world look two-dimensional, and utilizing a style that references some of Piet Mondrian’s most famous works. 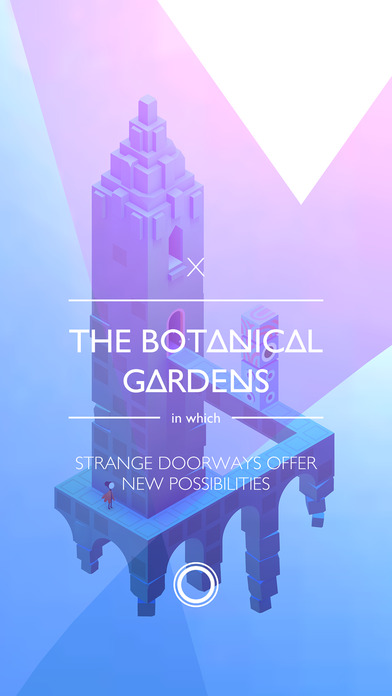 The thing is that we’ve seen this genre evolve. There’s obvious inspirations like Euclidean Lands ($2.99), which serves as a perfect counterbalance to the lack of difficulty of Monument Valley by having some truly, truly devious puzzles. But we even see games like Old Man’s Journey ($4.99) which go light on the puzzles, but feel like they still require some thought, and aren’t afraid to go light on dialogue while going deep on emotional connection to the player. Your mileage will vary depending on your emotional connection to the story, but in my personal opinion? I think that since Monument Valley released, other games have stepped it up in the genre. This isn’t a slight against Monument Valley 2, as it reaches new heights in terms of artistic effects for everyone else to compete against. It’s just as a cohesive game, there’s other titles that provide gorgeous experiences with more satisfying puzzle challenges and storylines that are abstract yet meaningful.

The way that you have to look at Monument Valley 2 is the same way that I look at Monument Valley. That, as a delivery vehicle for the gorgeous art, it’s top-notch. But as an actual game, and even as a storytelling experience, it’s not quite on par with some of the fine experiences that have hit mobile since Monument Valley burst onto the scene. It’s tough to criticize the game too much since I’m pretty sure that the purpose of Monument Valley games is to be a delivery vehicle for some gorgeous art. And the mother/daughter themes of Monument Valley 2 are something I’d love to see other games explore. Father/son relationships have played a role in media over the years, and we’re seeing some games in the AAA space that are exploring that dynamic. And even for men, the mother/daughter themes of Monument Valley 2 are absolutely relatable. But there are aspects to the gender dynamic of mothers and daughters that I’d love to see more games explore.

So as a game, I have my criticisms of Monument Valley 2, and it’s kind of why while I understand why review scores are such a useful shorthand, they are imperfect for something like the Monument Valley games. If you want a puzzle game that will test you, this isn’t for you. If you just want something that you can interact with in order to get rewarded with interesting themes and gorgeous artwork, Monument Valley 2 succeeds at that. But if Ustwo ever explores this world again, I think there’s a gap between the gameplay and the art that could be crossed to make this the masterful experience these games have just barely fallen short of being in my eyes.