There aren’t many good games out there based on the Power Rangers franchise. Much of that is down to the nature of the licensing beast, similar to how hard it seems to be to get a superhero game of decent quality. There are many factors, both obvious and subtle, that work against licensed games. The Rangers certainly haven’t been free of such hassles. The obvious solution is to take a swing at it without a license, but as Behold Studios found out, that’s a delicate road to walk. Things worked out in the end, however, and Chroma Squad ($4.99) became an officially-endorsed spin on the Super Sentai concept that is free to do its own thing without the heavy restrictions that come with a full license. It’s a good game, probably the best Ranger-themed game ever, though how much you like it will depend greatly on what you’re looking to get out of it.

Chroma Squad provides an interesting blend of gaming genres. The premise has you controlling a group of five stunt actors from a Ranger-style TV show. Fed up with their director and the poor quality of the shows they’re working on, the group decides to strike out and start their own studio. Managing your studio works like a lightweight simulation game. You’ll need to decide how to spend your budget. You can buy new suits and props, upgrade various aspects of the studio location itself, and invest in marketing plans. You can craft new props from a wide assortment of bits and bobs, too. You’ll even initially have the choice of which five actors to hire, each with their own strengths and weaknesses. The goal is to build your audience, cultivate your fanbase, and try to make money. 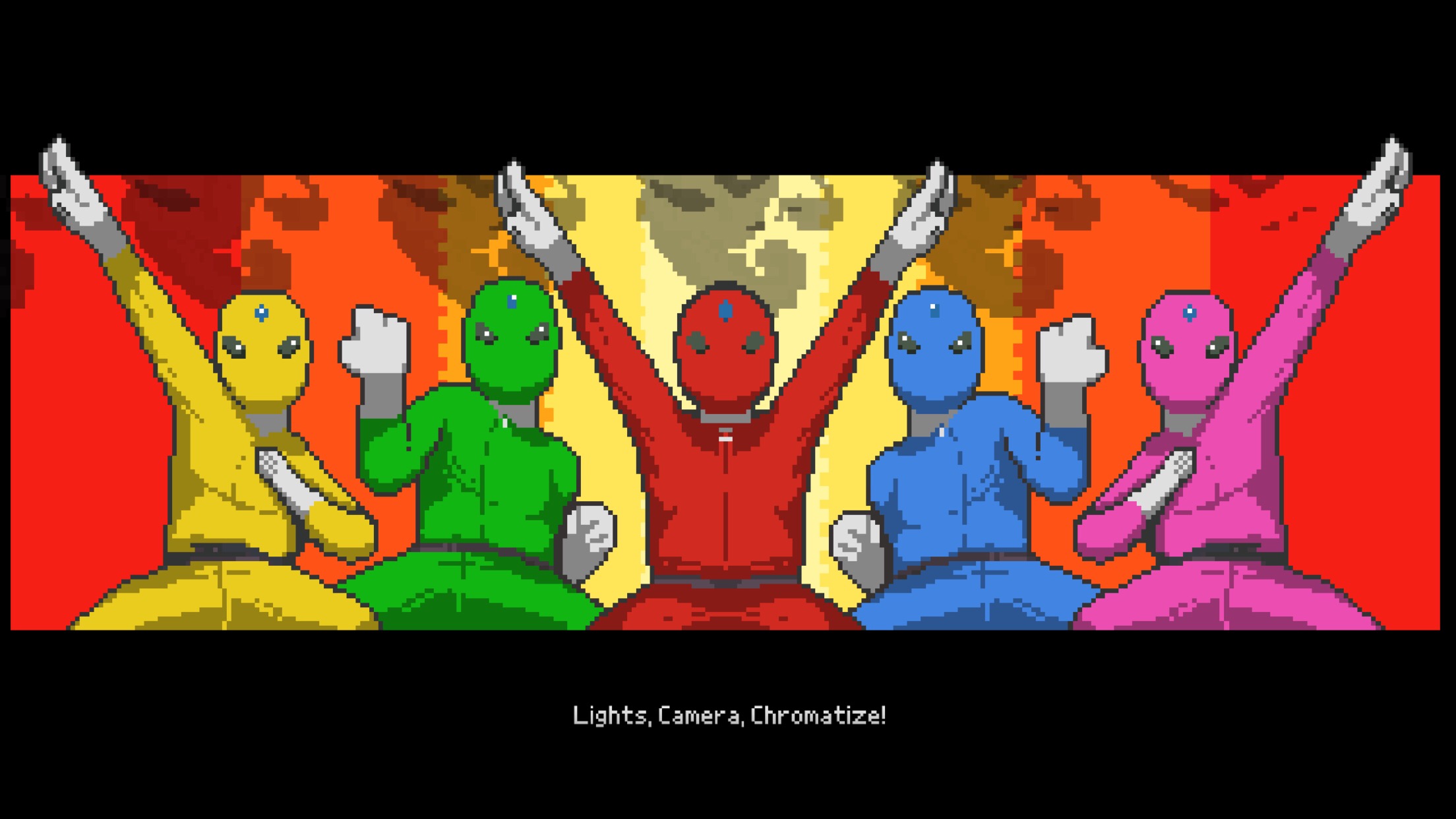 So that’s one half of the game. But when it comes time to film your shows, Chroma Squad turns into a turn-based tactical RPG. The battlefields are set out as isometric grids where you’ll move your characters and perform actions, trying to defeat the enemies. The flashier the fight, the bigger the audience you’ll draw, and the more money you’ll earn. You have to know when to switch from civvies to superhero suits, when to use dramatic finishing moves, and how to make the most of your acrobatics and special abilities in order to maximize your gains. On top of that, your director will issue some special goals for each fight that you’ll want to accomplish for better rewards. This might involve having a particular character hit the boss a number of times, a turn limit, using a finishing move at the right time, and so on.

Chroma Squad is constantly switching between its realities, especially early on. Outside of battle, characters will behave like actors would. They’ll have conversations with the actors they’re about to fight, comment on the sets, and so on. The game pokes fun at many of the tropes of the Super Sentai/Ranger genre. For example, most of your starting gear is constructed from cardboard, pieces of glass, and tape. As in Behold’s previous game Knights of Pen & Paper ($4.99), the characters in this game are pretty chatty. They’ll toss out commentary, some decent jokes, some terrible jokes, plenty of references, and even some memes that haven’t aged terribly well. There’s no situation they won’t try to hang a lampshade on, even stepping past the invisible line and mocking the shortcomings of the game itself. 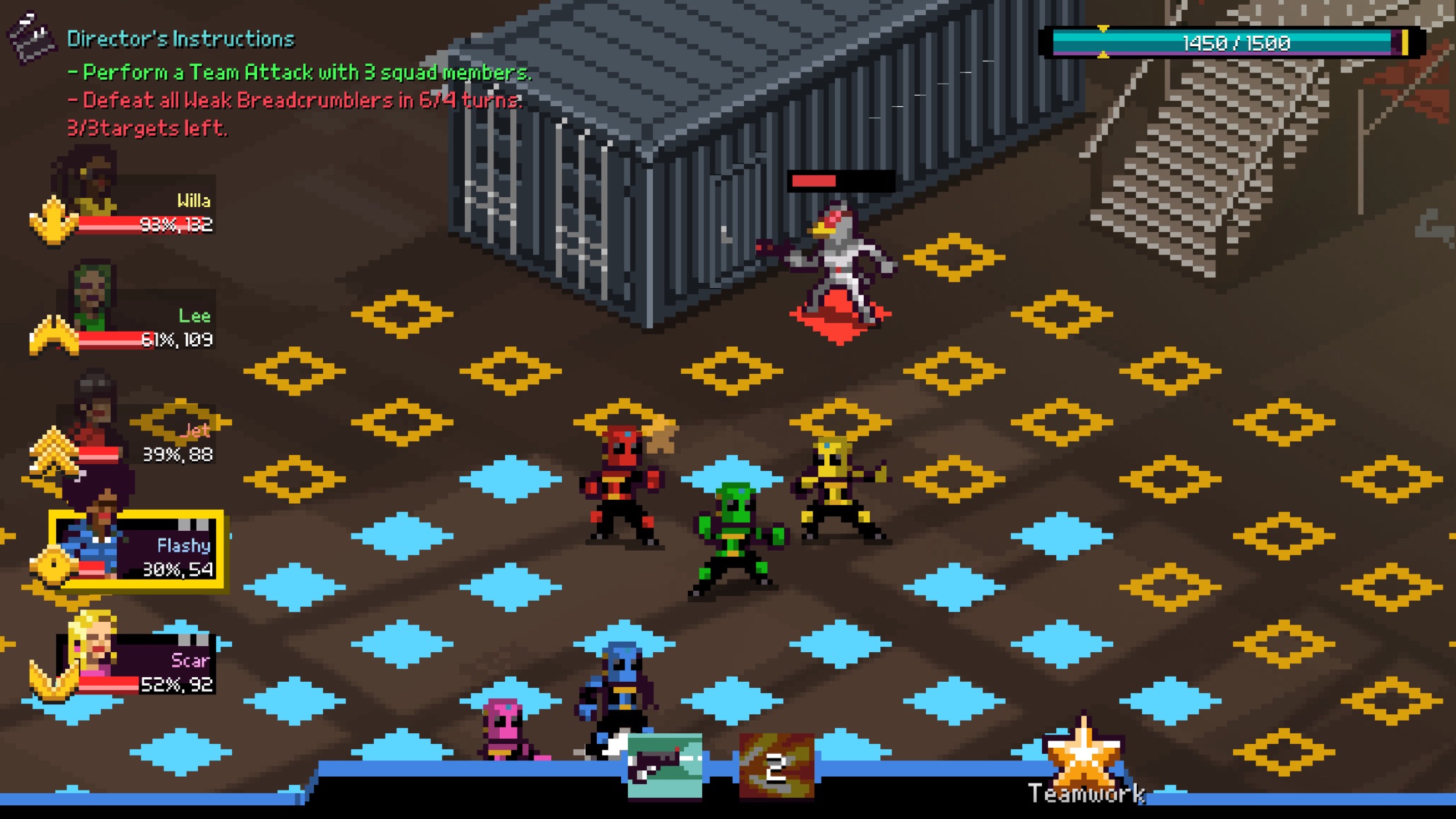 While you’re fighting, however, it’s all treated as things that are actually happening. The characters will shout battle cries, yell in pain, and taunt their foes. As you make your way through each season of the game, the part of the game that is supposed to be real and the part that is supposed to be on-camera fiction start to bleed together, making for some interesting twists and turns. It’s regrettably a little muddled early on, and you might find yourself wishing the developers had picked one narrative approach or the other, but stick with it. Things get better. Except the bad jokes. You knew what you were getting into.

It’s surprising how well these two different genres mix together in Chroma Squad. Playing the sim portion well gives you an advantage in combat, and doing better in combat gives you more resources for the simulation. Both sides are pretty fun in their own ways, with the excitement of seeing your fan letters roll in almost as compelling as landing that final blow on a nasty monster. Perhaps by necessity, neither portion of the goes as deep as more focused efforts. I wouldn’t say they feel incomplete at all, but the complexity has been dialed back compared to what you might expect from both simulation and TRPG games. As you play, your characters will earn new special moves and so on, but it doesn’t feel like anything new is happening in fights. You’ll likely be using very similar tactics in the final portion of the game to those that you were using early on. That would be a big problem if this were just a TRPG, but since the sim portion is there backing it up, the game still makes out okay. 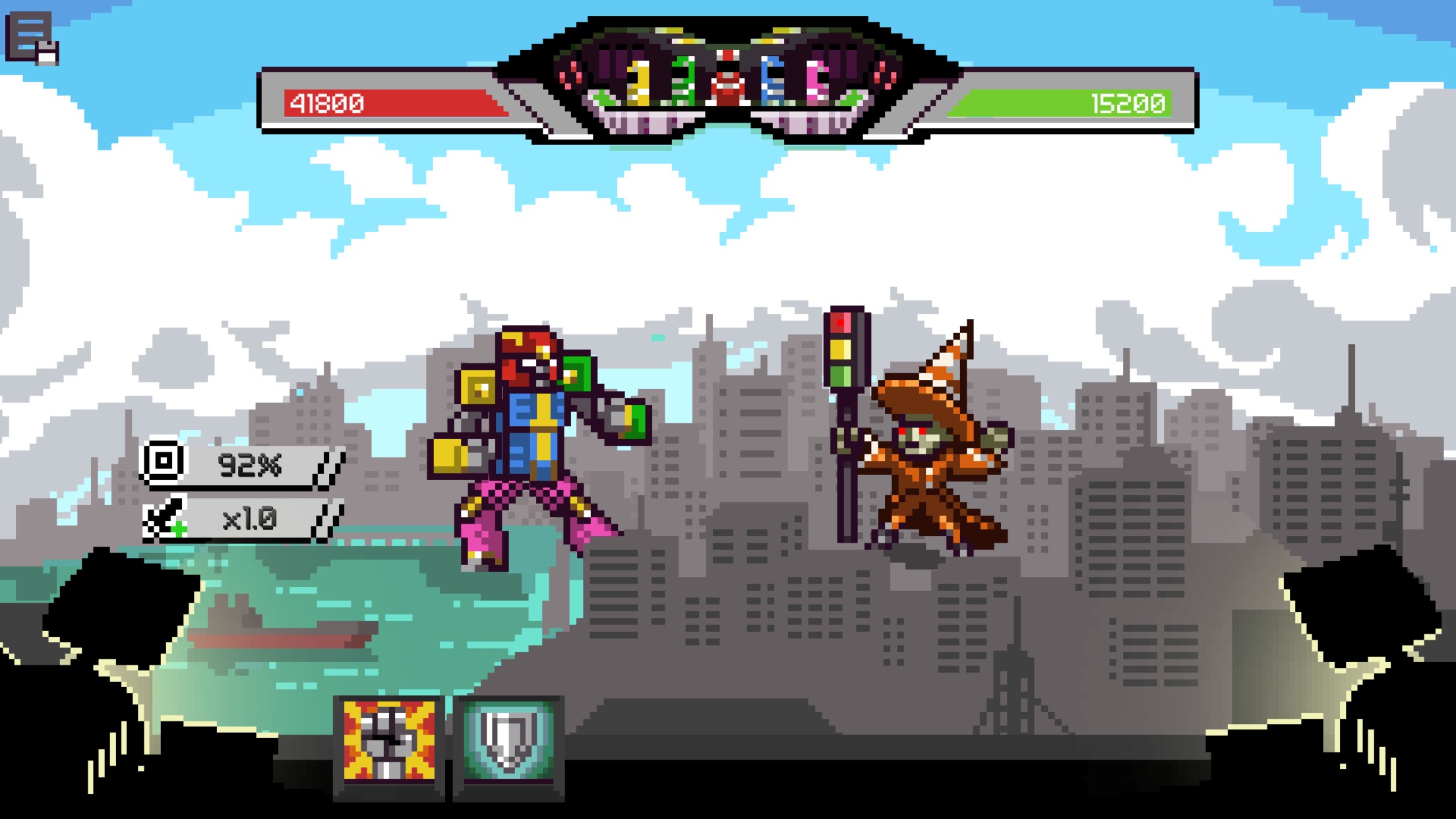 That said, the sim mechanics are even more simplified than the battles. You have a tremendous amount of customization capabilities at your disposal, right down to the words your team leader will shout when it’s time to summon your giant robot. But very few of these things have an actual impact on the gameplay. They’re just ways to personalize your experience. The bigger choices of where to use your money and fan following lose a lot of their power since you’re rarely lacking in either of those resources. This gets at the biggest problem with Chroma Squad. The game is just too easy all-around. You might be short on funds for a little while earlier in the game, but it’s not an active issue for very long. You’ll soon have more than enough for everything you need, which takes almost all of the bite out of the simulation side of things.

The battles aren’t totally bereft of difficulty, especially if you’re trying to check off the director’s requests, but compared to other TRPG games, Chroma Squad at its hardest is barely at the level others in the genre are at by default. I appreciate that there aren’t any stop-and-grind spikes in the game as there were in Behold’s last game, but I feel like they’ve swung a little too far in the other direction here. Few battles will actually require you to dig deeper in your box of tricks than the basic team-up attacks and healing skills that you have at the very start of the game. Adding to that issue is that there really isn’t a lot of variety in the enemies you’ll face, both in terms of their abilities and their tactics. The bosses are the enjoyable exceptions to this, with each one bringing their own special moves that add some spice to the encounters. 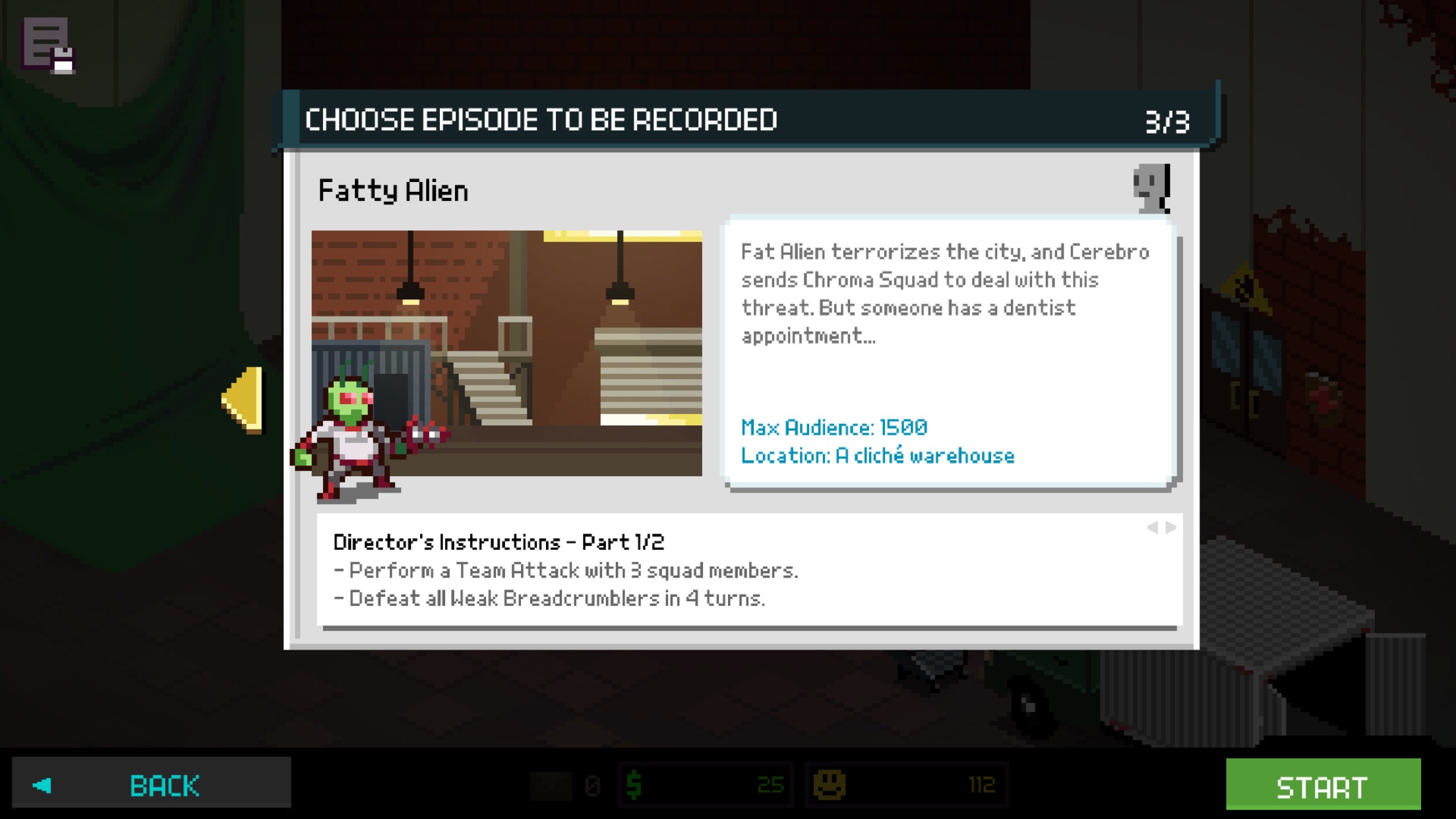 Chroma Squad first launched on home computers, but it has made a fine transition to mobile. The interface works well even on phone-sized screens, and the port thankfully benefits from the bug fixes done to the original version. There are a couple of problems, though. First is that the save system seems to have been retained from the computer version, which means you can’t save mid-battle. Combined with the game being a bit of a RAM hog, it’s easy to lose your battle’s progress if you have to stop in the middle for whatever reason. Most of the battles are fairly short, but there are some longer ones where that inability to save is a real bummer. There are also some issues with the camera during certain special moves. It tends to follow the character that is taking their turn, but that means that you sometimes can’t see how much damage an enemy did to your characters if they’re attacking from far enough away.

Basically, if you come at Chroma Squad looking for a high-quality sim or a top-shelf TRPG, you’re probably going to come away disappointed. It’s competent at those things, but from a purely mechanical standpoint, Chroma Squad is lacking a lot of things that go into making such games great. But there’s another way to approach Chroma Squad that puts it in a better light. While the game settles for nicely weaving together two competent gameplay models, it excels at something entirely less tangible. There’s a great deal of charm to the game. Some of it is extremely rough, but it never lets up. You can feel the passion for Super Sentai/Rangers oozing through every pore in a far more sincere manner than Knights of Pen & Paper‘s gestures towards RPG fans. The jokes, the sprite work, the music, the storyline, and even the little things the game allows you to customize are all exactly what a fan of the genre would want to see in a game like this. 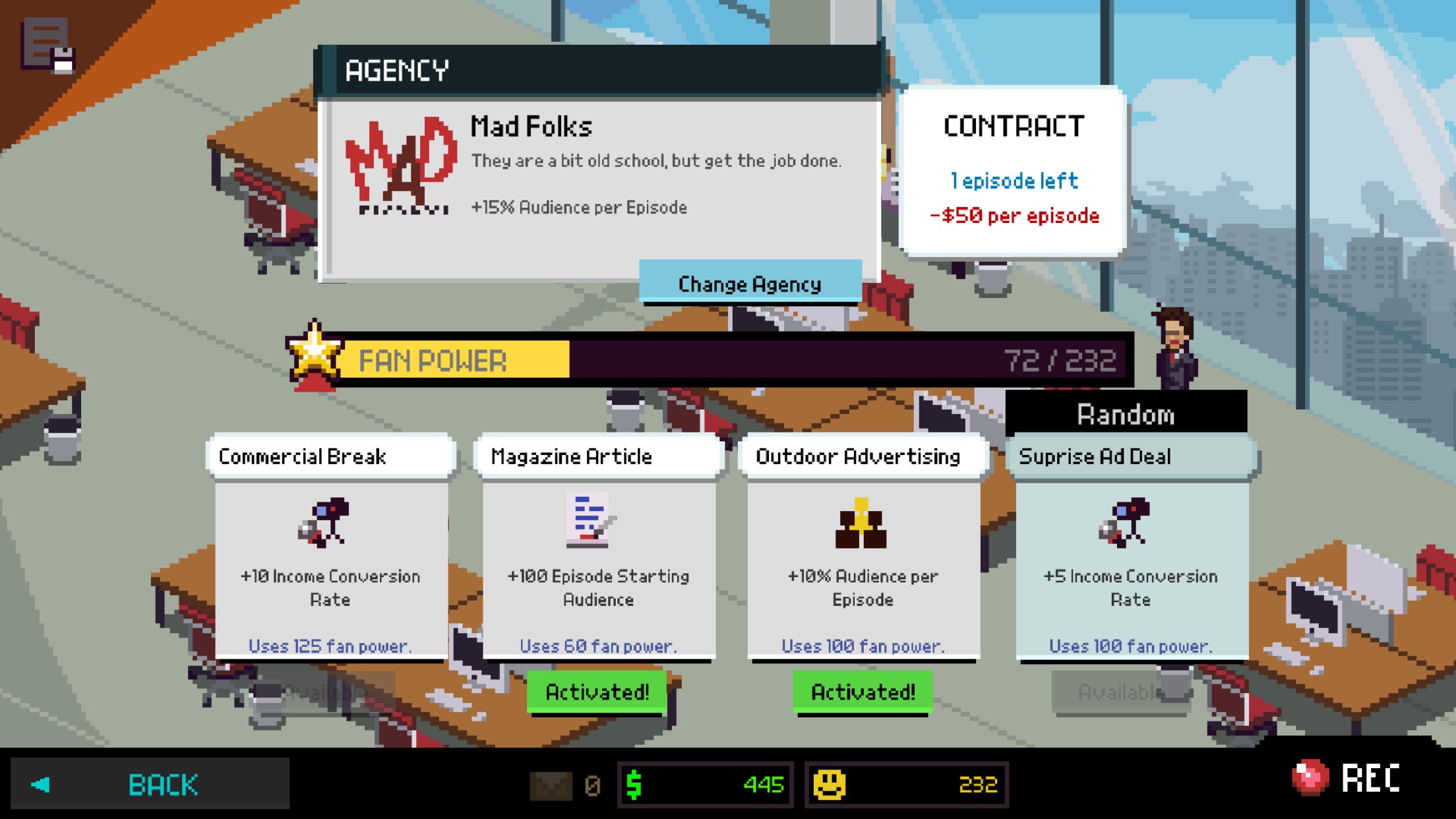 As a TRPG, Chroma Squad is decent but lacking the depth to give complete satisfaction. As a vehicle for Ranger fans looking to live out all sorts of fantasies, on the other hand, it’s fantastic. It jabs without being mean-spirited. It gives you the options you want. It tells a big, silly story with melodramatic twists and turns, and it never misses a cue when it comes to the fanservice-style elements you might want to see. I’ve played a lot of games based on Super Sentai/Rangers, and this is far and away my favorite. A great deal of the enjoyment comes from my affection for the theme and the goofy yet earnest approach Behold took in presenting it, however, so make sure you account for that. At the very least, as a game, it’s overall more well-designed than Knights of Pen & Paper. It applies much of what made that game good to a new genre, and it is unmistakably crafted from the same hands.