Hey hey, it’s time to make some crazy money, are you ready? Here we go! Those are the words that lit a fire in the hearts of many an arcade gamer and Dreamcast owner back in the day thanks to SEGA’s Crazy Taxi (Free). One of SEGA’s last big worldwide arcade hits, the game was one of the Dreamcast’s best sellers and among the first SEGA games to go multiplatform after the company’s exit from the hardware business. Over the years, it’s been re-released on just about every platform out there, including iOS and Android. To add another trophy to its shelf, it’s also one of very few non-Sonic premium games to survive SEGA’s big cull of titles around the release of iOS 9. SEGA clearly likes keeping the game around. 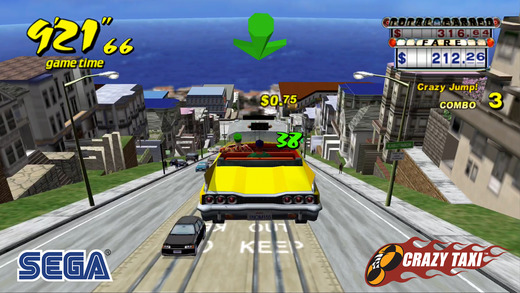 Well, I have some good news, some more good news, some bad news, and some okay news for you all. First point of good news is that the game has been updated with 64-bit compatibility, so it will survive the heavily-rumored 32-bit Appocalypse. Second bit of good news is that the game is now completely free. Ah, but regular readers know what that probably means, which leads to the bad news. If you update the game, you will now be in possession of one genuine ad-supported title. Finally, the okay news is that so far all I’ve run into is a quick pop-up banner ad for another SEGA game on start-up. If that turns out to be the usual case, it’s not the biggest loss. (This story has been updated, see below)

I suppose it presents us with an interesting question. If the only way for a game to justify being updated by a company is to go free and add some light ad support, is that an acceptable outcome? Sure, customers paid for the game, but I can’t imagine the relatively low purchase price justifies infinite support from the company. If I could save some of my favorite apps that will otherwise vanish by having a banner pop up on start-up, I think I would go for that. But the slope, it seems slippery, my friends. Well, weighty debate topics aside, Crazy Taxi is free now, so do what you will with that.

Edit: Hello, friends. I’m back with the exact nature of the changes. First of all, whether you’ve paid or not, you are now required to be connected to the Internet at start-up if you want to play. If you’ve bought the game previously, you will see a single ad for a SEGA game when you hit the title screen, but nothing more. If you didn’t already own the game, you’ll get more ads. You can buy a single $1.99 IAP to get the same experience the previously-paid users are getting. And that’s the skinny!

Edit #2 (June 1st): Hello, is anyone still there? SEGA has pushed out an update for the game that removes the online check and start-up ad for paying customers. Nice work, SEGA! That’s the way to do this kind of thing!