Throughout the history of the App Store, I feel like we’ve had practically every variety imaginable of dual stick shooters. Hell, we’ve even had dual stick looters, but a no stick shooter? That sort of thing is worthy of The People’s Eyebrow. Well, it turns out this no stick shooter, which consequently is also named No Stick Shooter ($1.99) is an unbelievably frantic game that’s most easily described as Missile Command with some interesting twists. It’s a little too stressful of a game for me, but in a world where gamers go absolutely wild for unbelievably fast-paced games like Geometry Dash ($1.99) I can definitely see the appeal.

Originally released in 1980, it’s a little hard to believe there’d be anyone reading TouchArcade who hasn’t played some variety of Missile Command. Whether you’re playing the original with a trackball, some Flash variety with a mouse, or on your iPhone with your finger, the idea is you have incoming enemies and instead of shooting them directly you’re lobbing missiles to specific locations, which then explode, and that explosion radius is what eventually blows up your enemies. 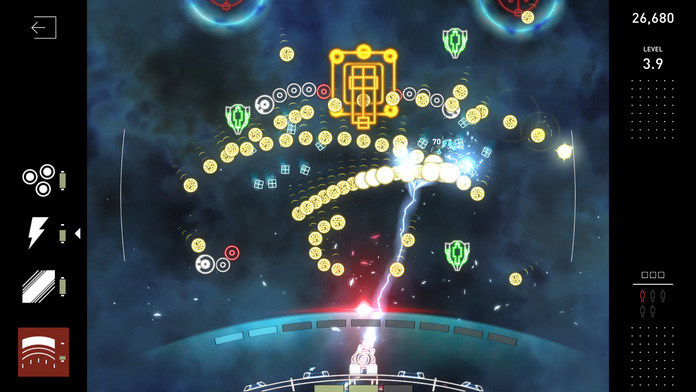 The core of No Stick Shooter is remarkably similar. In the earliest levels, yellowish orbs come flying towards your cannon. You tap on the screen to counter-attack, playing exactly like Missile Command. Things quickly ramp up, and instead of a few random yellow orbs floating your way, giant formations of them spawn sort of like the red dots in Tilt to Live ($2.99). You’d think “Oh well that sounds pretty easy, you can just spam your taps and spread explosions all over the screen." The problem there is that your weapons have energy that quickly recharges, so you’ve really got to be strategic with your shots otherwise you’ll be stuck in low-power mode briefly which significantly diminishes your offenses.

Once you get the hang of all that, the game throws you another curve ball with larger orbs which take three shots to kill. On the next level, you deal with formations of the giant three-hit orbs. Continuing the difficulty curve, yet another enemy begins headed your way in the form of tiny blue squares which are far more difficult to hit with your main cannon. After struggling with these for a few levels, you unlock your second weapon which is lightning gun of sorts which does massive area effect damage, knocking out all the tiny blue squares but doing almost nothing to the yellow orbs.

As you’ve probably guessed by now, just as you’re getting comfortable with your new lightning powers and balancing each weapon’s power recharge rate, you’re faced with entirely new enemies. This time it’s giant yellow squares, which first need to be hit with your main cannon then zapped with the lightning gun to kill. The game more or less continues this way, constantly introducing new enemies, a few new weapons, and different interesting ways you need to use your weapons to deal with different “phases" of more complicated enemies. Eventually you even come to larger almost mini-boss style ships flying your way, and some really cool boss fights. 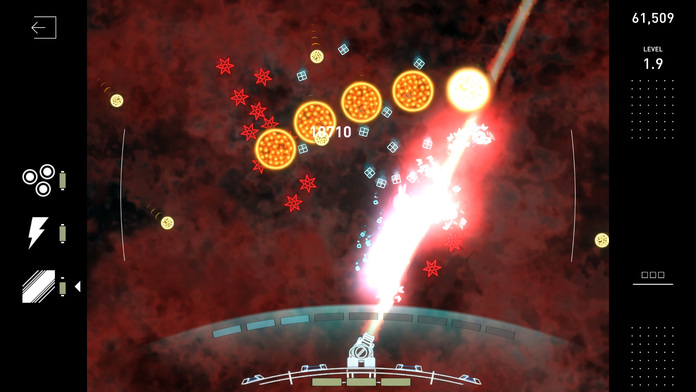 Like other Missile Command derivatives, you’ve got a shield which is slowly whittled away as enemies sneak past your offenses, and once your shield is fully depleted you can take three more hits before you’re toast. Thankfully, you just start over at the beginning of the level that you failed, so death isn’t too punishing.

The cadence of the game is incredibly frantic, as it always feels like you’re just constantly on the cusp of running out of energy, giving your guns a fraction of a second to charge back up, before you get back to shooting enemies which are now bearing down right on top of you. The way you need to rapidly switch between weapons introduces a sense of keeping a bunch of plates spinning, as you can be doing great blasting away a bunch of pesky enemies with your giant laser you’ll eventually get, but the entire time you’re firing that, enemies which aren’t weak to your giant laser are rapidly approaching.

The various levels seem balanced in a way where the wheels are just about to fall off the bus just as you kill the last enemy, but the whole thing just feels a little too stressful for me. When you’re playing a dual stick shooter, a genre which I totally dig, it seems like waves typically give you a chance to breathe. A ton of enemies might spawn, but after kiting them around a bit there’s typically a chance to center yourself, hide off in a corner for a brief second, then another wave spawns. In No Stick Shooter, while you do get those breaks between levels, when you’re actually playing it’s just a non-stop assault that only gets more complicated and more frantic. Just look at the trailer, these aren’t just quick clips of high action segments, this is the entire game:

It’s a weird complaint that One Stick Shooter is too action packed, but it just isn’t really for me. I fully admit that there’s tons (and tons) of people who love games that are just a brutal onslaught of never-ending swarms of enemies to blast. If that describes you, chances are you’ll be super into No Stick Shooter. Better yet, it’s a paid game with no freemium hijinks- Always a welcome thing to see on the App Store.