To The Moon ($1.99) is an experience that depends almost entirely on the way its story unravels, and the exceptional music backing it. Spoiling the story, any bit of it, beyond the premise would be doing any potential player a tremendous disservice. And while I can offer up all kinds of praise for the audio, it’s not as though that’s easy to convey through text. So what should I write here? Let’s start with this: To The Moon is an amazing journey through the memories of a man who has reached the end of his life, and as long as you don’t mind the fact that the gameplay doesn’t involve much more than walking around and clicking on things, you really ought to play this.

To The Moon has been around for a while. Originally released in 2011, the game was created for PCs using RPG Maker. You would be forgiven for thinking the game is an RPG, but other than a knowing wink to the whole idea early on, you won’t find any of the usual genre staples here. No, like the horror game Corpse Party, To The Moon used the RPG Maker tools to make something in another genre. In this case, an adventure game with some light puzzle elements. The team in charge of the mobile versions of the game re-wrote it from the ground up in Unity, giving them the opportunity to re-write the UI to make it more touch-friendly. 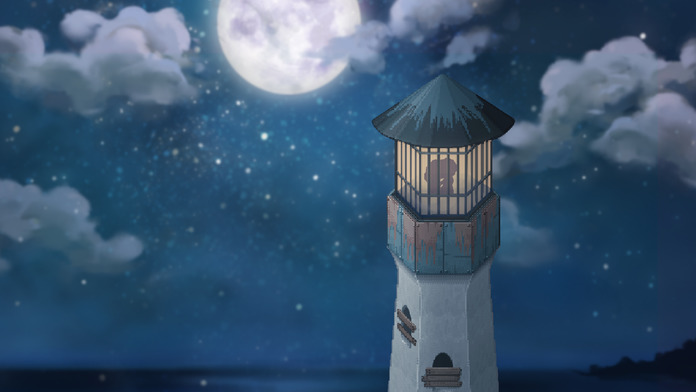 If you’re just here wondering how that port turned out, I can tell you that it’s mostly good. The new interface works well, the presentation is intact and even mildly improved, and certain puzzles and mini-games work even better here thanks to the touch controls. The downside is that basic navigation is somewhat unwieldy. The controls remind me of the fussy nature of early Kemco games that had trouble distinguishing whether you were trying to use the virtual pad or trying to click somewhere on the screen. It’s annoying, but nothing too serious. Certainly something to keep in mind, but it doesn’t stop this from being a good way to experience the game.

In case you aren’t familiar with the premise of To The Moon, I suppose I should fill you in. In the not-too-distant future, there exists a technology that allows people to reshape their memories. The company behind this technology offers it as a service to grant wishes to those who are near the end of their time, allowing those people the chance to virtually address any regrets they might have or fulfill dreams they never got around to. This technology can’t remember it for you wholesale, however. Rather, a copy of a person’s memories is made and specially-trained agents simply give the person a little nudge at the right point in their life. 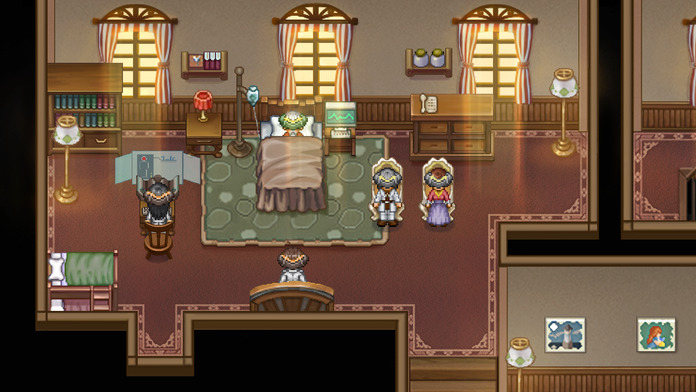 To do this, they need to travel backwards through the person’s memories from their most recent to some of their oldest. Once the agents have found the right way to create the desired outcome, those simulated memories are copied over to the person, giving them the experience of achieving their wish without actually changing their objective reality. For a dying person, it’s probably enough. To The Moon starts off following two agents as they arrive at the location of their latest assignment: a man named Johnny who only has a day or two left to live. He’s already slipped into a coma, but before that happened, he was able to contact the company and express his wish. Johnny wants to go to the Moon, and your hapless heroes need to figure out how to get him there.

From a mechanical perspective, what you’re looking to do in each area is to find five special mementos that will help you open the way to the next memory. Once you’ve done that, you’ll have to solve a simple tile-flipping puzzle that will lead you to the next time and place. The areas you need to explore are relatively small in most cases, and important items stand out because they’re typically among the few tiles that don’t repeat. There are a couple of mini-games to spice things up, but you won’t be doing much more than walking around, tapping, and reading for most of the game’s relatively short running time. Basically, this is only mildly more interactive than a visual novel, so come in with the appropriate expectations. 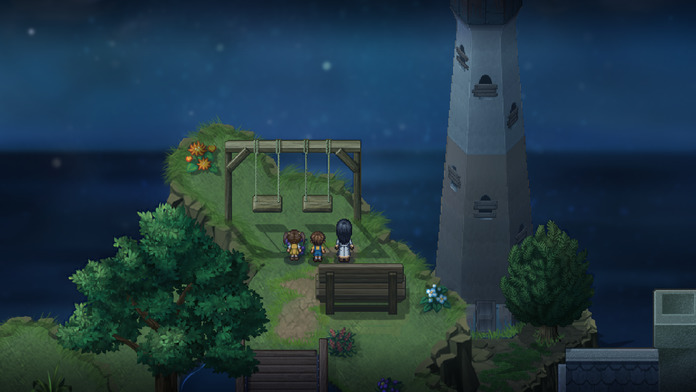 The story is really good overall. Some of the dialogue can be dicey, and there are typos scattered here and there throughout the script. One of the main characters can be a little obnoxious at times, but if nothing else, it helps establish him as a distinct personality in this world. The main plot is fantastic. It’s deeply emotional, thought-provoking, and manages to keep a lot of balls in the air without dropping anything major. The story structure basically has the plot coming out in reverse chronological order. It’s a tough trick to pull off, but To The Moon handles it well. You’ll be wondering the how and the why of various things, only to pull back in time a little and get maybe an answer or two along with another question. You might think you’ve guessed where things were going only to have a new explanation reveal itself. And when you’ve finally woven everything together and it all comes to a head, it’s hard not to feel something for these little clusters of pixels.

Of course, it helps that the music is there massaging your emotional state the whole way through. To The Moon has a wonderful piano-heavy soundtrack that knows when to bust out the strings for maximum effect. Make sure you play this one with the sound on, because you’ll be cheating yourself out of an important part of the game’s world-building if you can’t hear the music. While the graphics are quite simple, looking like something out the 16-bit/32-bit era, I’ve often maintained that that kind of simplicity can actually stoke the imagination and generate more compelling performances than you might expect. It allows the player to project some of themselves onto the characters, which makes everything feel that much more personal. That said, it does use some interesting techniques with the sprites. Some characters will look a little fuzzy, showing that Johnny doesn’t remember them well. Some will be mere outlines, as Johnny never bothered memorizing their faces at all.

To The Moon doesn’t offer much in the way of mechanical depth, and there’s really only one way to experience the story, so its replay value is not great in theory. It’s certainly one of the jobs of a review to inform readers of things like that. But the ultimate goal of a review is to tell you if something is worth your time and money, and in that capacity, I can’t recommend To The Moon enough. The mobile version has some issues with fiddly controls, but don’t let that stop you from playing this superb adventure. It’s beautiful in the most human way possible.