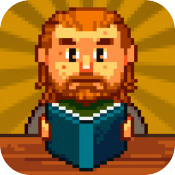 You may have noticed in the past month or so that Knights of Pen & Paper 2, developed by KYY Games and published by Paradox Interactive, had gone missing from the App Store. Several players in our forums and elsewhere on the internet sure noticed, but Paradox was remaining tight-lipped about why the game was removed saying that a big announcement would be coming. Well, here is the big announcement: Knights of Pen & Paper 2 is converting to full free to play, and all previous progress players have made in both the iOS and Android versions is being completely wiped due to the save files being incompatible with the new free to play version. PriceIsRightFailHorn.wav

Listen, I try to be as open-minded about things like paid games converting to free to play as I possibly can. I have an intimate, daily look into how freaking tough the mobile market is, so when it comes down to a game having to make some possibly drastic changes just to survive or simply being left to die, I’d rather the developers at least try to keep things going, even if that means it directly affects me negatively in some way. In the case of Knights of Pen & Paper 2, Paradox is at least trying to do it in as friendly a way as possible. Existing owners will be compensated with 40,000 worth of in-game gold and are supposed to be able to restore any of their previously bought DLC.

Unfortunately, things aren’t going so smoothly. The game has already returned to the Google Play Store on Android, and while existing owners did get that big chunk of currency they have also apparently lost the ability to restore the DLC. Paradox has stated that this is not intended and DLC should be able to be restored, but as of right now there’s no official solution to fix that. The loss of save games, however, is intended and almost sucks as much as losing out on content you’ve previously paid for. I can chalk up a few bucks as a loss for the greater good of a game’s future health, but losing actual time I’ve put into a game sucks badly.

If you want to try and find a bright side to all this, once these conversion pains and bugs are worked out, hopefully Knights of Pen & Paper 2 will find a broader audience as a free game, and with its new free to play model hopefully generating a constant stream of income, Paradox has a lot of plans for keeping the updates rolling into the future. Also, the original Knights of Pen & Paper ($4.99) remains available and unchanged, and it’s still a damn fine game, so there’s always the option to play that. Plus the creators of the original, Behold Studios, are already well underway with their space-themed Galaxy of Pen & Paper, so there’s that to look forward to as well.

I’m still waiting for the game to return to the iOS App Store to see how the free to play version turned out, and as a previous owner who has since deleted the game from my device, to see if it will actually reward me the compensation or not. Anyway, this whole scenario is something to be aware of if you were wondering why Knights of Pen & Paper 2 was gone from the App Store or if you have it installed currently and see the update arrive for it and wonder what it’s all about.