After playing Principia ($2.99) through a few times, I find myself a little conflicted. This is an odd sort of science simulation game where you take on the role of a historical scientist and try to build your fame and fortune through research and discovery. Rival scientists will try to beat you to the punch or cattily attempt to discredit your work, and you can choose to respond in kind if you like. The game ends when your chosen character reaches the end of his working life, so you’ve got to try to get in as much as possible by then. It’s a messy, ambitious game, and when I think on it, it doesn’t really work at all. And yet, there’s something compelling about it all. Perhaps it’s the thrill of chasing a discovery to its end. Maybe it’s the joy of rising to the top while your rivals slide downwards. The game’s nerdy enthusiasm for science is also rather infectious. Whatever the case, it’s certainly something to try if you’re looking for a different kind of simulation game.

On paper, Principia seems like an appealing take on the simulation genre. You’ve got lots of moving parts to work with that seem like the sorts of things that would be fun to juggle in pursuit of success. There appears to be a lot of potential for replay value, since there are a number of CPU opponents in play who are working towards their own ends. It’s at least an idea that hasn’t been beaten to death in prior games. You might not be pushing little armies against each other, but the more familiar sort of warfare that these academics engage in could definitely make for some exciting drama. It’s even packed full of interesting scientific facts that you may or may not already know. I get to play as Isaac Newton and try to figure out what exactly light is while my rivals try to discredit me and get me tossed out of my research circle? Sure, that sounds great. You can feel the passion for the process of scientific discovery oozing through Principia‘s pores, even through a somewhat stilted English translation. 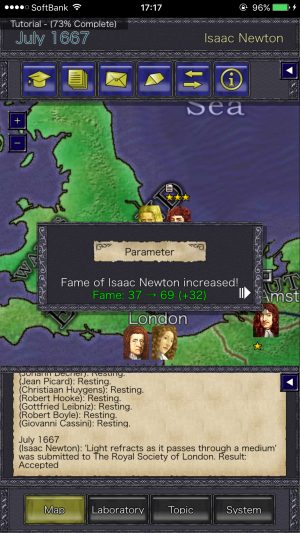 To the game’s credit, there are points where it’s all working well. You can definitely see what it’s going for. But more often than not, playing the game well doesn’t involve engaging with any of the game’s wider mechanics. It also doesn’t seem to require much skill or planning. Just keep doing your research thing, and it will all turn out okay. That’s fine for the first couple of playthroughs, since the process of researching is in itself somewhat interesting. But once you’ve seen all the text that those branches of research have to offer, the game can no longer support its own weight. In other words, the content in Principia is good, but the way it’s sewn together really isn’t.

You’ll start the game by choosing a scientist. Each of them has their own stats that represent their real-life specialties. You can increase those stats along the way, but that takes time, so you’ll want to choose someone who is at least competent at the first area you’d like to research. Depending on who you choose, you’ll start off in different locations and professions. You’ll also start with some resources, which can be used to purchase various types of apparatus to help you with your research. You can earn more resources in a number of ways. Your profession will pay a salary of some sort, published papers will earn you a big chunk, and other scientists may even wish to sponsor you. I never actually had an occasion where my resources felt insufficient. There aren’t that many things you need to buy and the money earned from publishing research quickly outpaces those needs.

Anyway, the first thing you need to do is choose your area of research. A tab shows you all of the currently available topics, with most of them gated off by stat requirements. Some topics will be relatively unexplored, while others might already have an authority in the field. If they’re the latter, you’ll be competing against someone who already has a head start, so it’s advisable to go for an open topic instead. If your stats aren’t high enough, you can always read books or attend lectures to increase them. You just need to be careful that in doing so you aren’t losing ground to the other scientists. Once you’ve selected your topic, you then head to your laboratory. 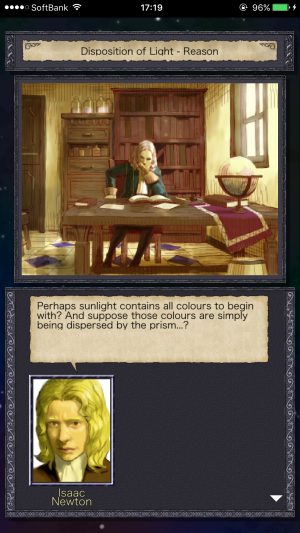 In the lab, you can conduct experiments, observe, or use your reasoning to try to make discoveries. Each action will push up your stats in that area, and when a certain threshold is reached, your scientist will have a revelation. At that point, you have to try to prove your theory, which again just involves spending some turns selecting the choice on the appropriate menu. Once you’ve taken it as far as you can, you can then compose a paper and submit it to the academy of your choice. A panel of academics will judge your paper and either accept it or reject it. If they accept it, you’ll earn some fame and resources. If they reject it, your scientist will be discouraged and have to go back to the drawing board. Some theories simply won’t be accepted no matter what, capping out at a relatively low level of completion. In that case, all you can do is go back to experimenting and reasoning to try and stumble on the next theory. Eventually, you’ll tap out all of the possible points. At that point, you choose another topic and do it all again.

It’s a slow process, and it’s unfortunately quite repetitive. There are no monkey wrenches or anything like that. You just put in the time, put your work to the test when you think it’s good enough, and if it’s not, put in more time on it. The only real interruptions come when your rivals try to discredit you. When this happens, regardless of the outcome of their challenge, your character will be left in a lethargic state. He won’t be able to do any experiments, observations, or reasoning until it clears. He can still compose papers or engage in other activities, however. That includes improving stats through various means, corresponding with other scientists to try and build or destroy your relationships with them, or even taking on new professions to increase your incoming resources.

Since the review of your research is done by your fellow scientists, the status of your relationships with them is important. If you anger someone sufficiently, they will almost always vote against you. Make too many enemies and you’ll have trouble getting published anywhere. Of course, you can eventually get the same power. Earn enough prestige for an institution and you might find yourself on the board or even as the president, wielding your voting power like a tyrant. If you decide you’re getting too big for your local pond, you can always pick up sticks and move to a new location. It doesn’t seem to matter all that much, mind you. You can build your fame almost anywhere as long as you keep plugging away at your research. 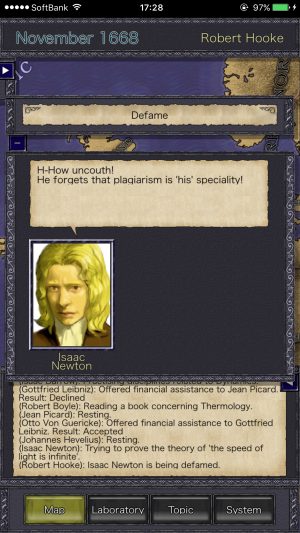 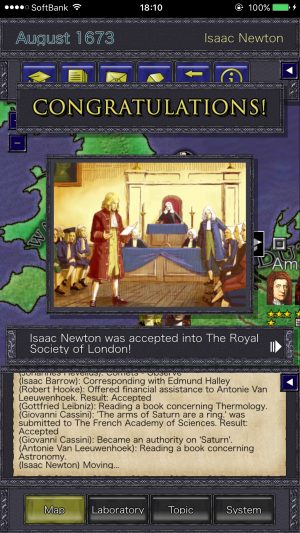 As your research on each topic progresses, your character will state the revelations he comes across. Sometimes, those revelations are obviously wrong, but it does a good job of illustrating the process of coming to a robust theory. It’s enjoyable to read these and see examples of how someone might think light travels at an infinite speed, for example. There’s nothing terribly advanced in here by modern standards, but you very well may have forgotten a lot of it from your high school days. Or perhaps, like me, you skipped those classes so that you could play more Virtua Fighter 2. In which case, you might learn something new here. These bits of the game were the most enjoyable for me, but they run out sooner or later.

With little challenge and no real need to engage with the game beyond the most basic of mechanics, Principia is all dressed up with no place to go. I had fun with it, to be sure. But I also found myself getting bored frequently, having to take breaks to avoid being ground down by the constant repetition. If you don’t mind that the game is fairly simple and have an interest in the topic, you might want to check out Principia. I want to give it a stronger recommendation than that, because the game has a lot of heart. I just wish the quality of its methods matched its passion.