Sega Networks and Sensor Tower partnered to release their 2016 Mobile Gaming Trends Report. While it’s worth noting that findings from these reports are often estimates that can vary by a lot based on the sources that various firms have for their data, this report contains something particularly interesting. There were two new games released in 2016 that crossed the $100m revenue threshold in the important US market: Clash Royale (Free) and Pokemon GO (Free). But what’s interesting is that no other game even came close, according to Sensor Tower’s estimates. Next up would be Lords Mobile with an estimated $18.1 million in revenue off of 4.1 million downlaods in the US, and then Super Mario Run (Free) with an estimated $16.4 million in the US off of 16.6 million downloads. Which would suggest that Nintendo might have seen an exceptional 10-14% conversion rate on the full game unlock, and yet a traditional free-to-play game in Fire Emblem Heroes (Free) still earned more. Plus, look at Lords Mobile‘s downloads: a quarter of the downloads, and about the same revenue. 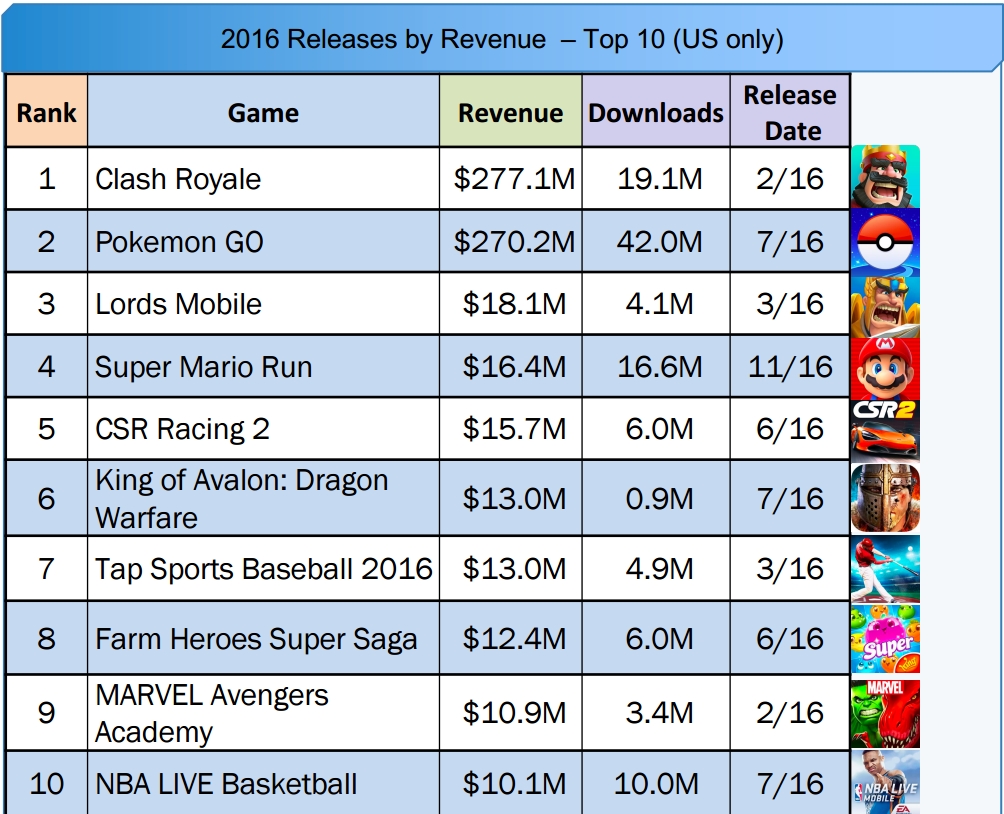 But this just goes to show how different the mobile gaming world is. When you talk about games-as-a-service, that means that developers aren’t forced to constantly put out new games one after another because they need to keep the money flow coming in. When it becomes possible to spur new purchases by just adding new content and features to existing titles, new releases don’t have to happen. Yet, it goes to show that it’s tough to break in against the entrenched titles. The two games that did really well were a Clash of Clans (Free) spinoff and a unique Pokemon game. Some of the other data in the report, summarized in a Gamasutra post, points out that downloads for apps are spread out among the various rankings, while revenue is clustered twoard the top. As such, there are multiple ways to compete on mobile: go Ketchapp-style with many releases and aim for ad revenue and utilize cross-promotion, or go big with a free-to-play game. And if you’re an indie, well…you’re playing in a totally different ballpark.