The Rossman Bros. have delivered a rather fun arena shooter in Get Me Outta Here ($2.99). Starring a middle-aged man (with surprising jumping and rolling skills!) abducted by aliens, and given a limited amount of time to clear them all out with his deadly firepower, what seems like a simple game of run ‘n gun action has a surprising amount of depth to it. The heart of the game is you trying to survive the same arena with the same enemies, but interesting strategies that appear over time. Plus, it features a giant weaponized cow boss, and some heavy weaponry to deploy. Who doesn’t love that?

The scenario in Get Me Outta Here is the same each time, but the rules and happenings are remarkably consistent with just enough variation to keep things interesting. You’ll recognize the few enemy types and their spawn points, but when and where they spawn is random. Items will come in as you play, with you getting one of each powerup per session, and never any duplicates. It’s just the order that they show up in crates that is randomized. The health refill station in the center of the arena is something that can be used strategically, as it takes about a minute to recharge. So, you might want to use it earlier or later than might be ideal so that you can be sure to have a health refill during a tricky boss fight, particularly the final boss. The bosses always appear when there’s 1:30 on the clock, so getting quick kills of them is important so that you have more time to just kill enemies and get your combos going. 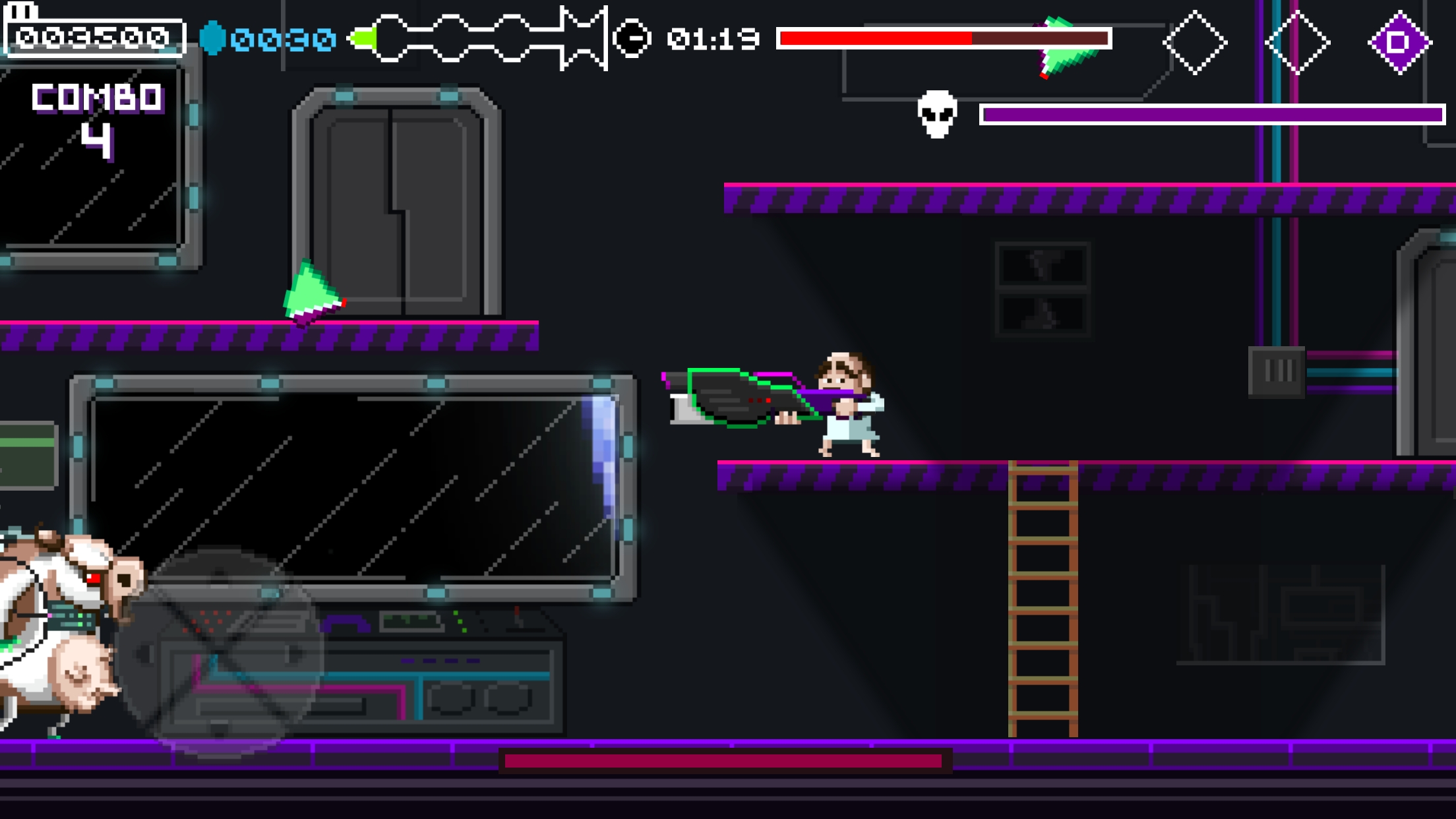 In fact, the time element is less of an oppressive element than you might think. It means that you can’t dawdle against boss fights, but I’d find it quite difficult to run out of time if you really weren’t paying attention. Instead, it works to the player’s benefit to work quickly because in the long term, you’re playing for high scores, and getting more time for normal enemy fights to get lucrative combos is so important. It’s a subtle, but well-designed element to Get Me Outta Here that becomes apparent the more you play. In fact, boss fights make enemy-killing still important because they can have a negative impact on your combos. Smart players will have a field day with Get Me Outta Here. And I like that each weapon has its own ranking, as it means while you can play with different weapons and play styles, there’s still reason to go back to the default Father’s Gun, that relative pea shooter, if you so choose.

The controls are interesting, because they have some wonky aspects to them while also having some particular clever ideas. The d-pad used to move about is a bit small, and it’d be great to see multiple size options, or perhaps just some kind of virtual stick. The d-pad does move around with your finger so there’s a bit of forgiveness to it, but it’s not a perfect implementation. The incorporation of swipes to jump, drop, and roll are well done. The fire button is a bit weird, as there’s a short delay before it triggers. For automatic weapons, you likely won’t notice any issues. For weapons like the shotgun, or the SF86 Blaster’s grenades-via-double-tap, you’ll run into issues if you’re trying to rapidly fire. With the shotgun in particular, my problem was that in the final boss battle, I would try to rapidly fire it and watch as it felt non-responsive. The secret instead is to tap and hold, as it’s a semi-automatic weapon in practice. To paraphrase Rudyard Kipling: “keep your head when all about your are losing theirs." Don’t panic and you’ll do well.

It’ll take you a few runs to beat the game, but the long-term hook is the high score aspect. Each weapon has a 5 star score. And yes, the treacherous Rossman Bros. have dared to give me three and a half stars: 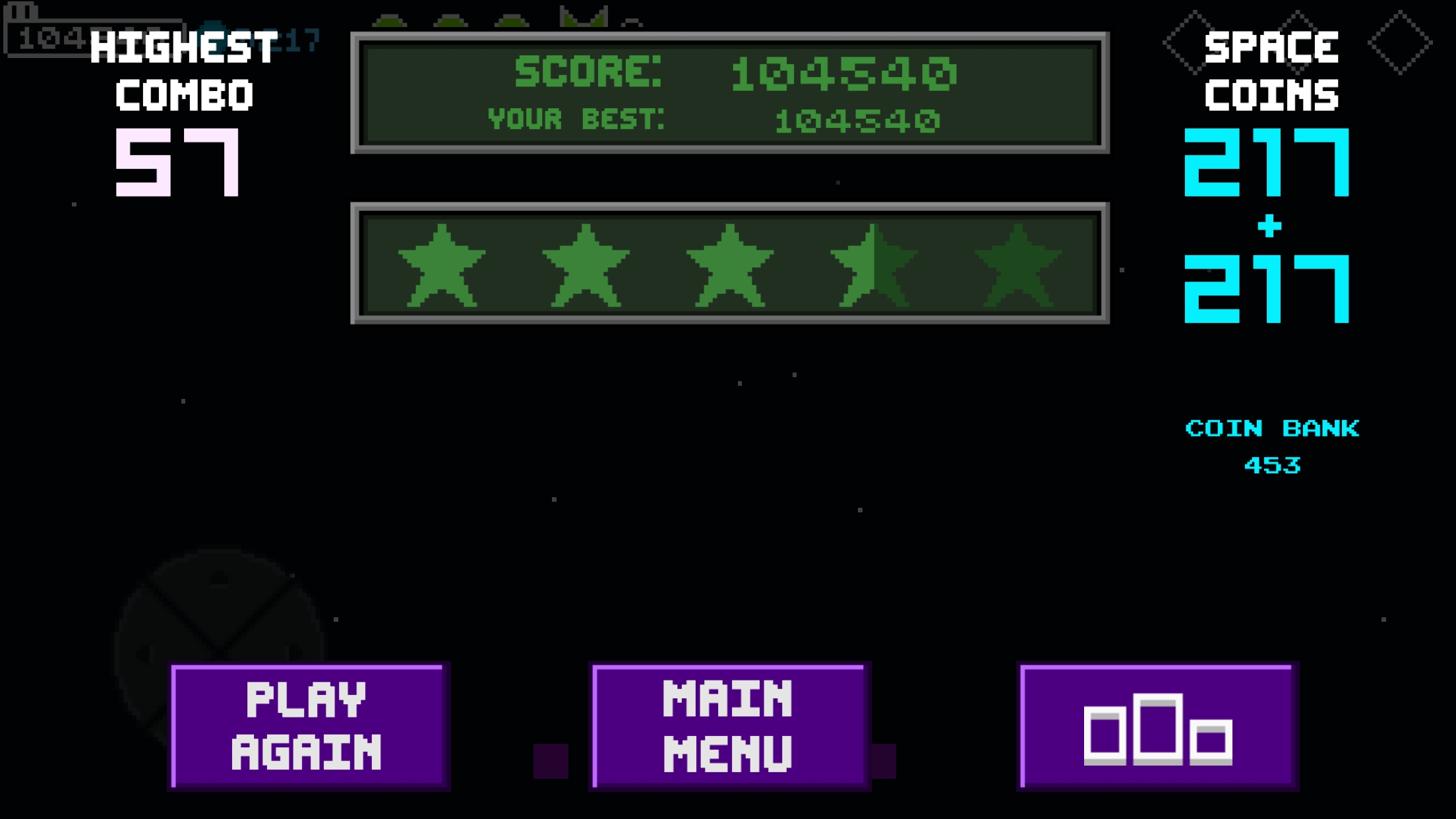 But what’s cool is that there are different modifiers that can help you out with your goal, whether it be completion or high scores. You can increase or decrease damage done to you, at a score bonus or penalty, respectively. You can give bosses more or less health for a bonus or penalty. Similarly, you can have more enemy spawns or fewer, with this having an indirect benefit: a greater chance at maintaining and extending combos with more enemy spawns, thus leading to higher scores. Makes sense! This also means that you can get a bit of an easier experience if you’re starting out and just want to get completion, but then can get some bonuses for high scores and top rankings. Beyond that, there’s an endless mode, boss rush, and a special extra-difficult boss fight to take on. 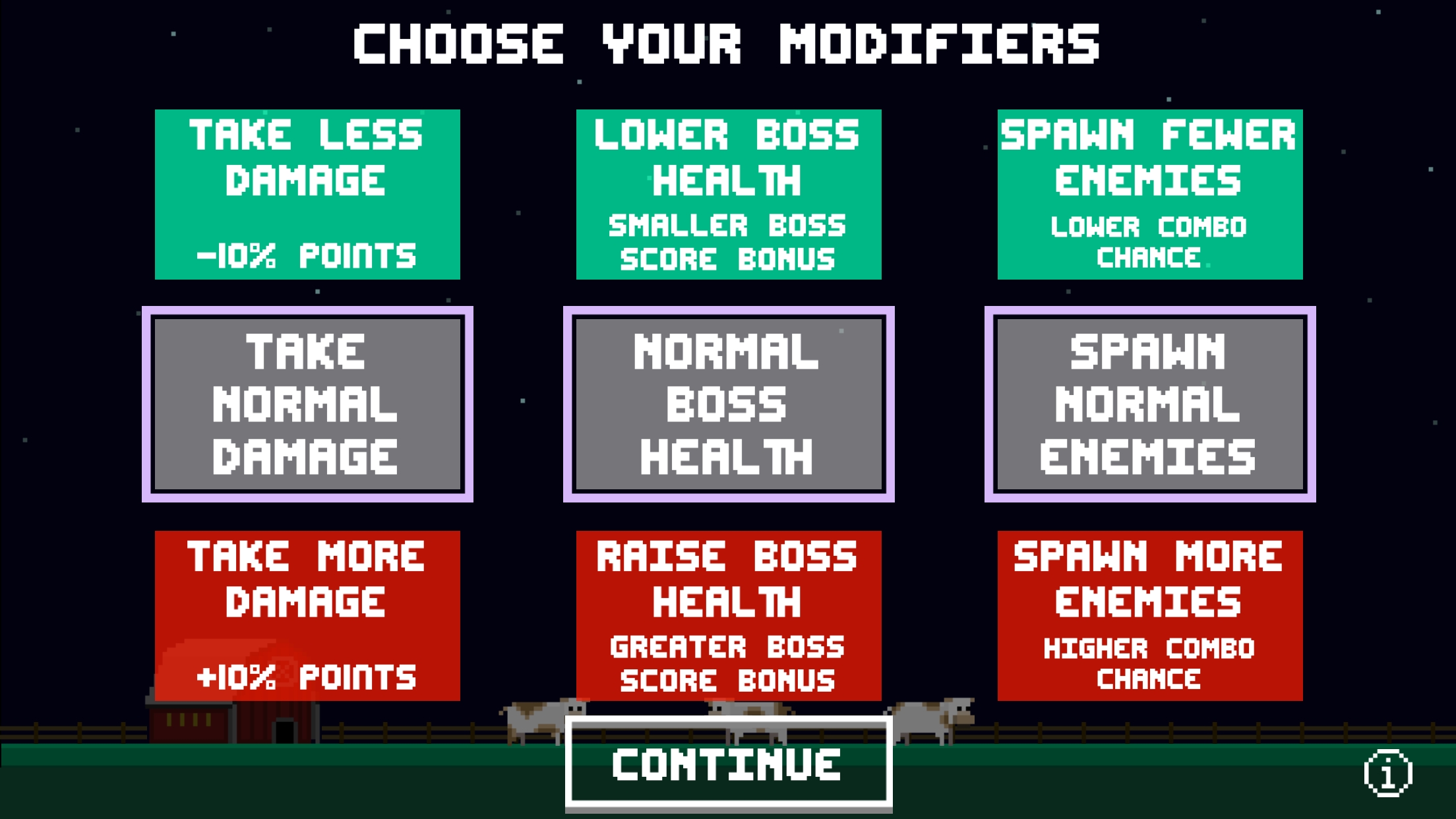 Get Me Outta Here has an exceptional sense of whimsy to it. The voice acting adds a dimension of humor to the experience. Enemies yell “This guy’s good!" The dialogue before bosses is funnier when hearing someone say it out loud. And every line is voiced! There’s not a lot of dialogue in the game, but still, well done! Plus, you will hear the actual title in the game. The game’s whole style has just enough of a hint of the grotesque to it without it being gross-out or overbearing. And if you haven’t seen the trailer they made for the game, uh, you need to see it:

Get Me Outta Here is free with some incentivized video ads for things like weapon usage if you want to play for free, but a $4.99 unlock gets you the full game without any restrictions. I like that there’s the $9.99 pack as well, which comes with exclusive skins, but I’d love to have a $4.99 upgrade to that pack to show support and get the exclusive weapon skins.

Get Me Outta Here has a little bit of jankiness and rough edges to it, but they don’t diminish the overall experience to a great degree. This is a rather fun arena shooter, and well worth a download at the very least, though you’ll get a ton of fun out of the full game unlock if you indulge in it.