When I reviewed Falibetter Games’ Fallen London some time ago, I talked about how much I enjoyed the dark, twisted, yet also funny world the writers have created; it’s not every day you journey through a London realized in an intriguing Victorian Steampunk aesthetic. While that literary RPG was great in terms of content and ideas, the app itself had huge issues that, unfortunately, kept players away. I’m glad to say that Sunless Sea ($9.99), Failbetter’s sequel of sorts to Fallen London, works pretty much like a charm on an iPad, and that made playing it much more enjoyable than Fallen London partly because it actually working as it should.

The good thing about the app working well is that you can focus on the game’s immersive stories and fantastic—though often mad—characters you encounter along the way. In terms of narrative, few App Store games can compete with what Sunless Sea has to offer. And for those who hate just reading text, Sunless Sea adds a sailing mechanic to the Fallen London recipe that allows the game to rise beyond just being words on a screen. 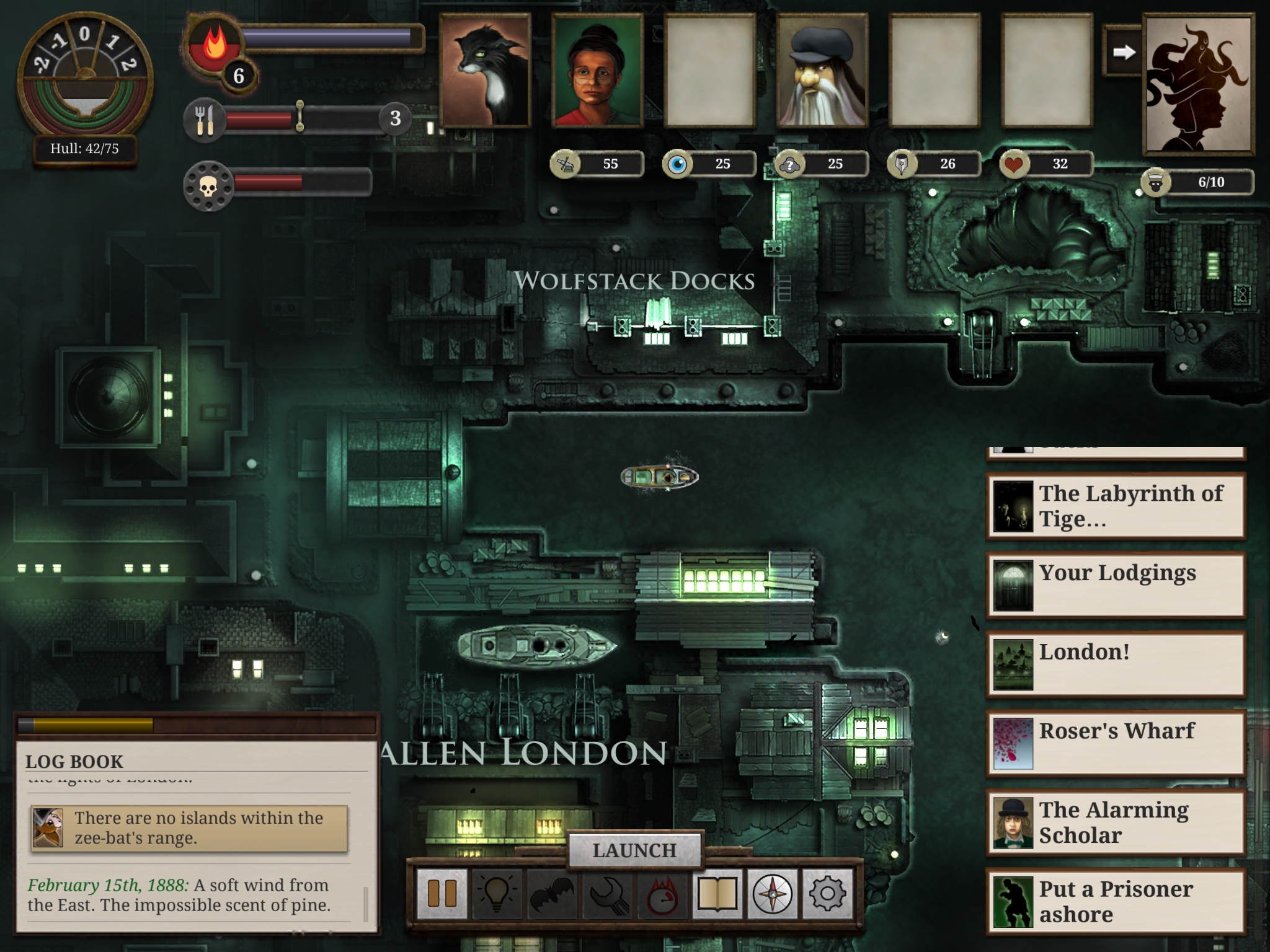 How does Sunless Sea play? If you’ve seen any screenshots before, you probably know that a big part of your playtime is spent sailing across a gloomy, uncharted sea called the Unterzee. You start as the captain of a pretty weak ship and set out to face all that the sea will throw out you. Your ship requires fuel to move and to operate its lights, and the crew requires food to sustain itself (cannibalism isn’t unheard of in the Unterzee). So, the basic loop is stock up on food and fuel, set sail for various destinations, discover all kinds of peculiar things, return to port, sell secrets and information to make money, restock the ship, and sail out again. Don’t imagine for a second, though, that this loop is repetitive; the soul of this game is the amazing stories you encounter and create during your travels. And because the crazier stories are usually at the edges of the map, you’ll find yourself pushing your crew and your ship (and your sanity) every time you sail.

The sailing part of Sunless Sea works fine overall, although having to hold your finger on the screen to navigate or change speeds gets a bit tiring at times. And because the iPad screen isn’t the biggest (compared to that of a PC), your finger can often hide possible dangers you should be avoiding. These niggles aside, I did enjoy exploring the large—and procedurally generated—map, and while in the beginning I felt this sailing mechanic didn’t really add much to what is essentially interactive fiction with RPG elements, the more I played the game, the more I enjoyed that sense of adventure. If you’re one who enjoys occasional breaks when playing text-heavy games, you’ll be happy to know that Sunless Sea also has naval combat to break up the monotony and create a sense of additional dread. 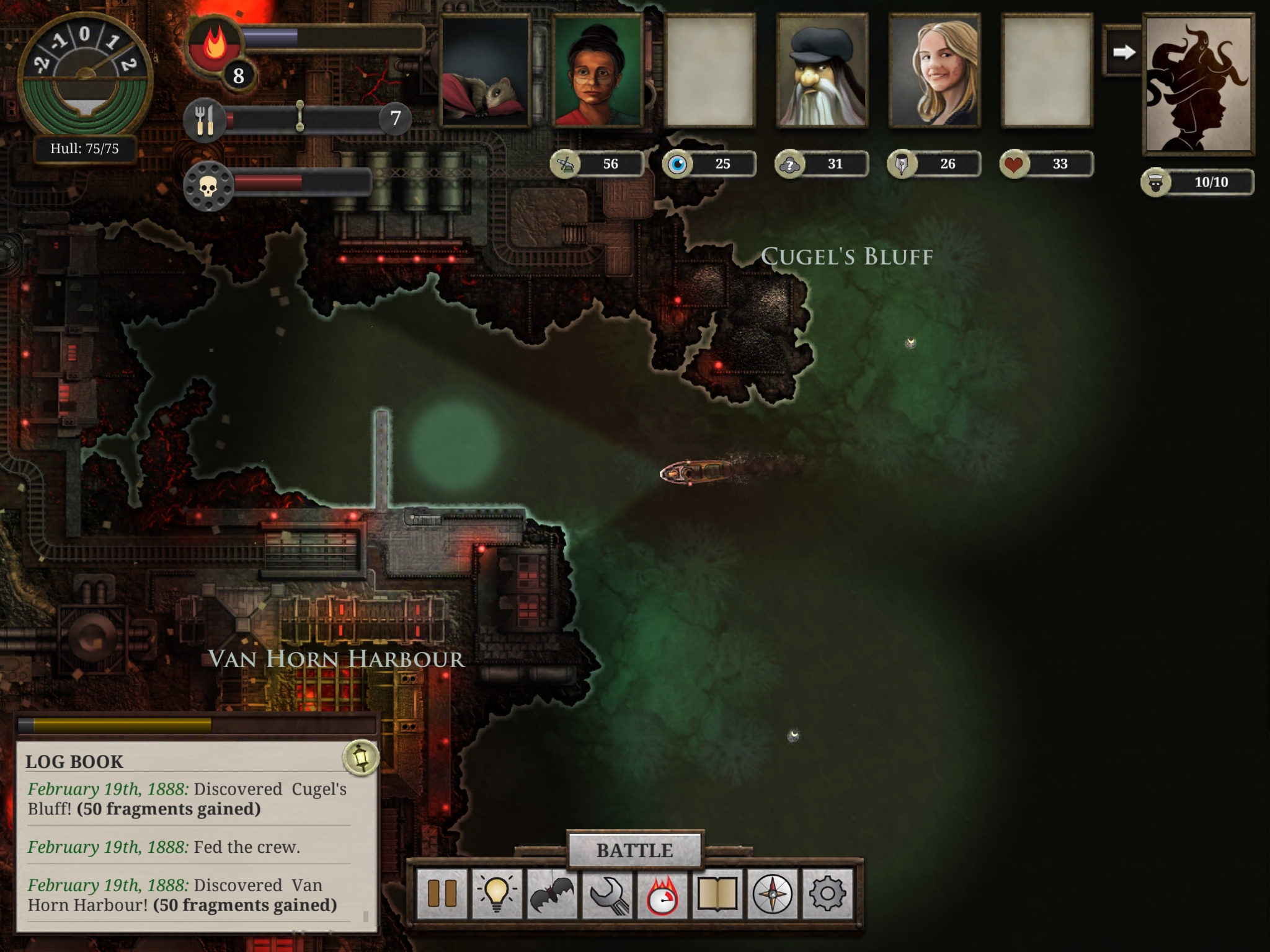 Speaking of sailing, Sunless Sea has a clever light and dark mechanic that nicely links to the terror of sailing in a dark, dangerous sea. You can manually turn your ship’s lights on and off, and while having them off can help you evade other ships and the occasional monster, a ship that sails in the dark brings nothing but terror to its crew. And since the Terror quality negatively influences you and your crew, it won’t allow you to sail in the dark for long. Decisions, decisions.

The sailing by itself would be quite boring, though, if not for the fantastic adventures it creates. When you discover faraway ports, you get to meet their inhabitants (which aren’t always human) and partake in all kinds of…interesting activities. And these are the parts where Sunless Sea really shines because its writing is amazing. The places and people you’ll discover are perfectly realized, and the stories you create described with finesse and dark imagination. I really enjoyed the narrative strands as they unfolded, and I appreciated that the text is usually on the short side, which makes it easier to jump in, explore a bit, and jump out. 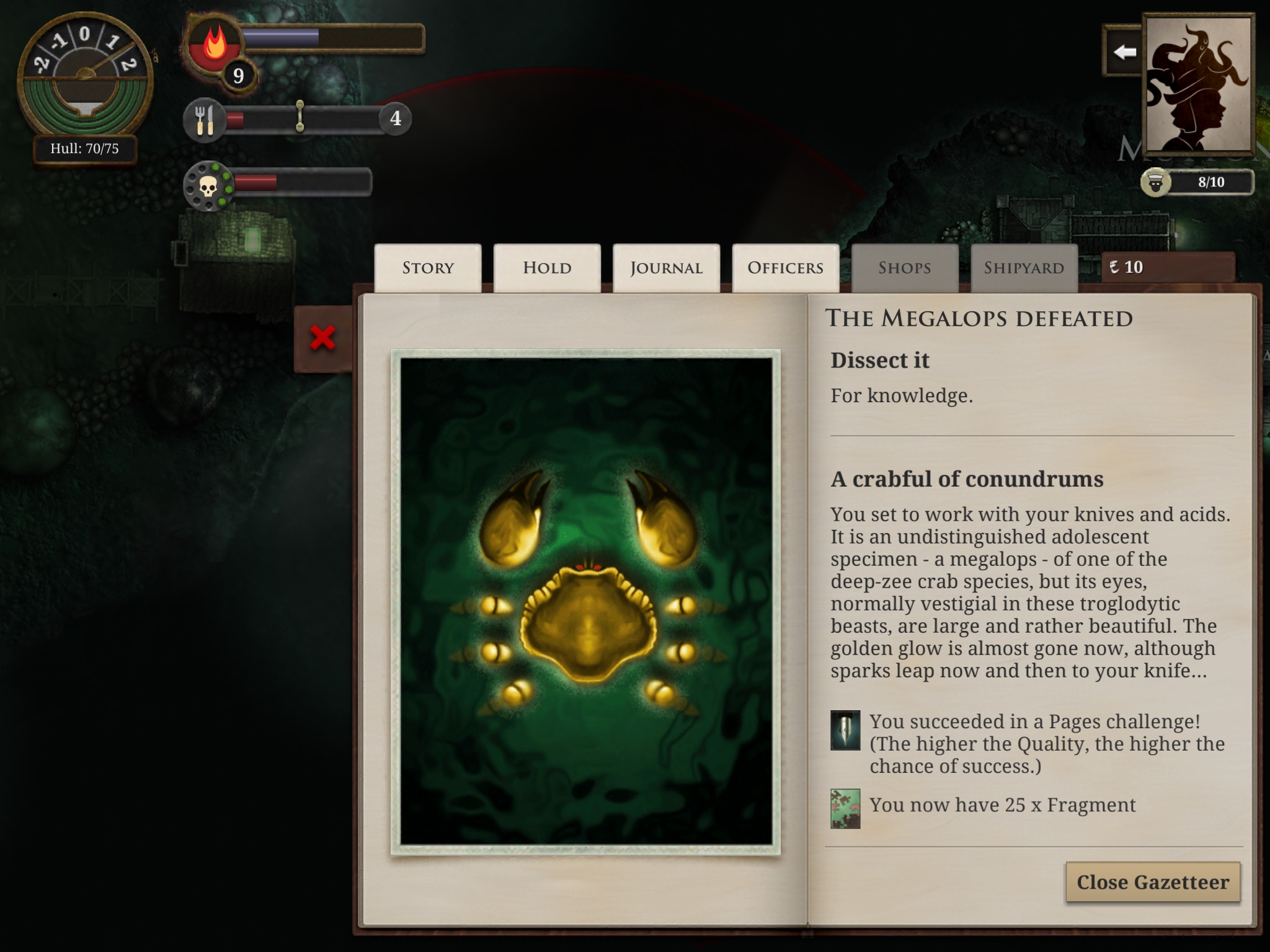 The way the narratives unfold will be very familiar to anyone who’s played Fallen London. If you haven’t played Failbetter’s earlier game, know that each place you visit has certain storylines awaiting, but you can only explore them if you have the required prerequisites. The most common one is money, but many story threads will require things like secrets, outcomes of previous stories, certain items, and so on. This system works both to tie the narrative threads together but also to keep you returning to the same places without it feeling like it’s groundhog day all over again. And the more you explore, the more you learn about the various denizens of Sunless Sea and the ways in which this weird and fascinating world operates.

You will die in Sunless Sea, though not too often, but death is not the end; like in any self-respecting roguelike, in Sunless Sea you get to start the game again but carrying forth experiences and items from previous playthroughs. This system encourages you to throw caution to the evil winds and risk your ship and crew without worrying too much about meeting a dreadful fate. I was glad to see that Failbetter Games didn’t hobble the game’s narrative potential by putting too much emphasis on surviving or on ensuring your crew members don’t end up eating each other. 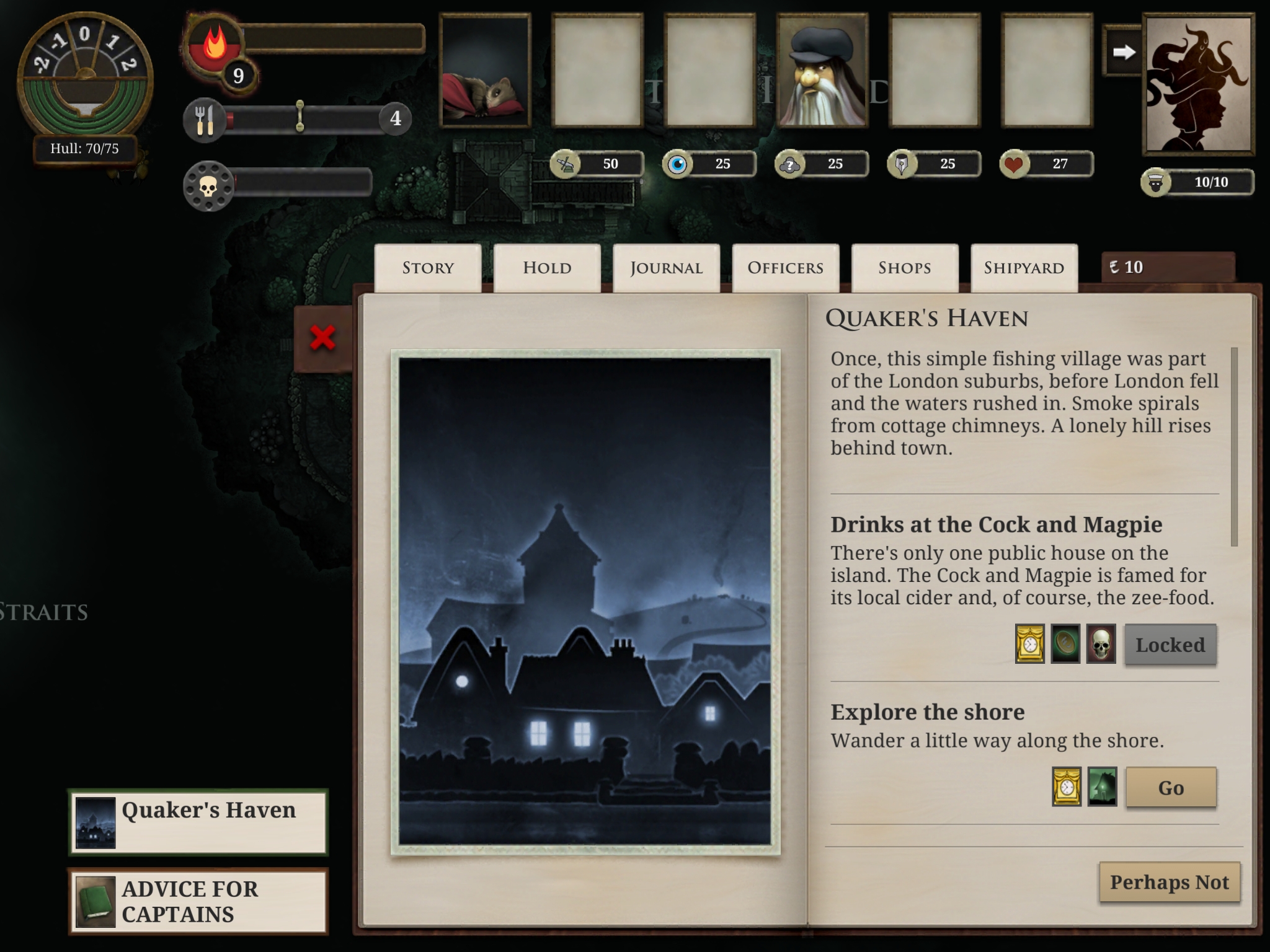 The whole sailing mechanic offered the opportunity for Sunless Sea to be more visually arresting than Fallen London, which consisted of plenty of text adorned with the occasional piece of art. The game looks lovely and, despite its moodiness, has plenty of color that keeps it from being drab and monotonous. The sea looks vivid and menacing at the same time, while the characters you meet and places you visit are depicted nicely in hand-drawn art. As is the case with the sailing aspect of the game, the visuals also help break the monotony of walls of text and make Sunless Sea feel more like a “game" and less like a book.

The only real issue I had with the game was the lack of a more in-depth tutorial. For those who’ve played Fallen London, the transition to Sunless Sea won’t be too hard, especially since the story parts work in almost the same way. However, even Fallen London veterans will have to figure out the various buttons in the sailing part of the game by themselves. If you’ve never played anything by Failbetter Games before, you’ll have to learn by trial and error. Yes, there is a tutorial when you start the game, but it leaves plenty out. One could say that discovery is at the core of this game, but I would have liked a bit more explanation in some instances. There is a manual nicely incorporated within the game, but, again, a bit more help with the various buttons would have been nice.

Sunless Sea is easily one of the best narrative-based games on the App Store, and I would venture to say that it’s one of a kind. The sailing and exploration parts combine almost seamlessly with the narrative part and help to deliver a fantastic game that you shouldn’t miss. And this time around, we also have an app that works great, which is definitely a plus. Hopefully, we’ll get the Zubmariner expansion soon for more madness and terror, but until then, there’s plenty to do in Sunless Sea, including going mad and eating your friends. Enjoy.