Sometimes I see people share negative reviews of Steam games that have massive playtimes on them. They’re shared in a context of this being ridiculous, that implies that the person with the negative review doesn’t know quite what they want. And the people who share these seeming contradictions are often rather progressive people, sharing a rather ironically regressive view. It’s a more complicated question than both parties realize. The negative reviewer perhaps should question whether the journey was worth it. But also, the critic should question just why they think it’s hypocritical. Is it possible that people enjoy certain parts of experiences, but other parts become too grating over time? That, if they had the choice to take those hours back, they would have spent them differently knowing the end result? Or were the hours getting to that point worth it, even if the end was sour? This is a philosophical dilemma that deserves greater inquiry. I bring it up because I find myself quite conflicted with MLB Manager 2017 ($1.99). It’s another solid baseball simulator, but as a major baseball nerd, I find myself frustrated by so many of the little things that this game continues to not get right. Yet, I find myself more hooked on this game than perhaps any other that I come across. 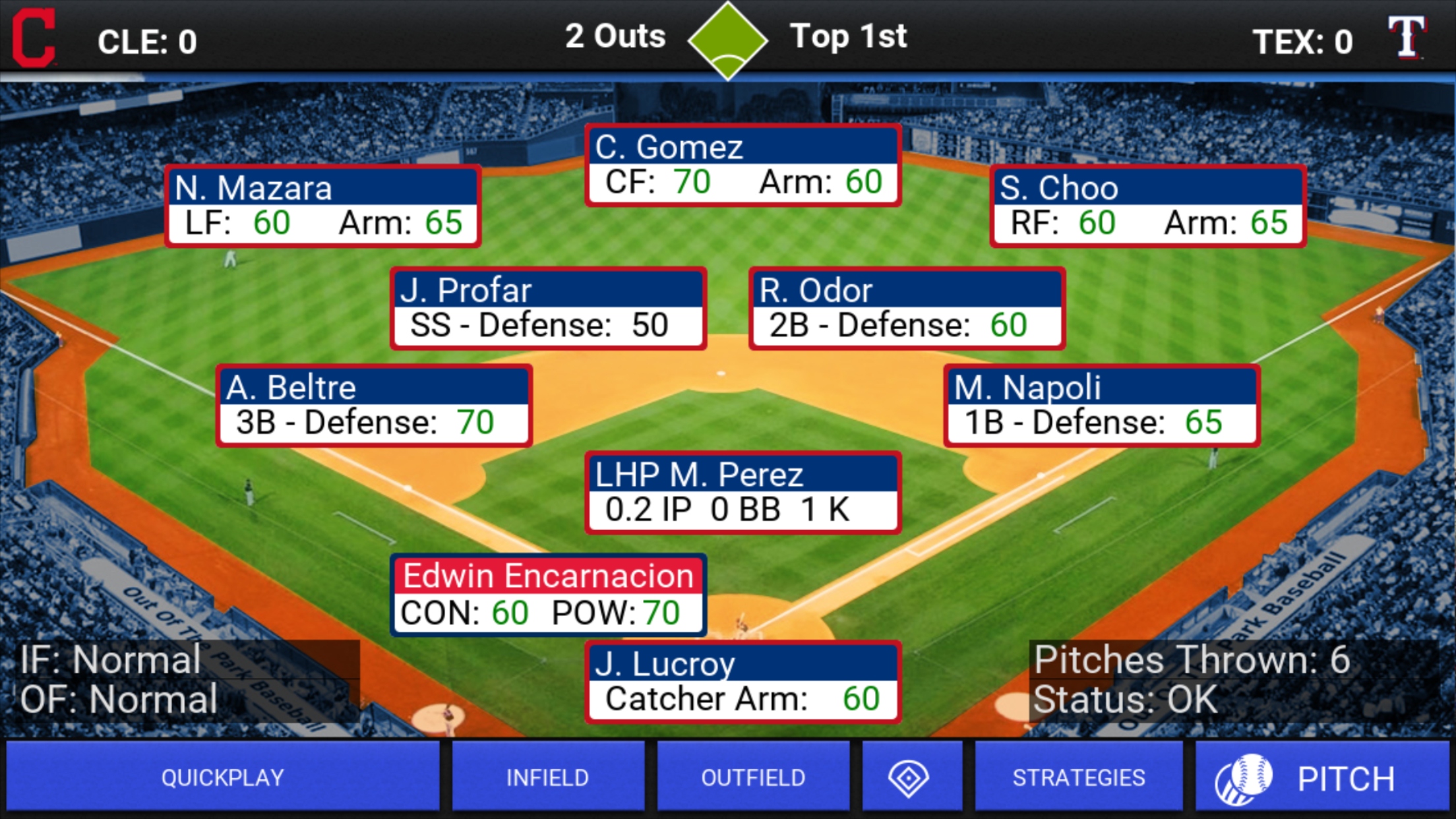 The very heart of MLB Manager is the same as last year’s and 2015’s entry which I reviewed. The series has its roots on mobile previously as the iOOTP games, before then getting official MLB licenses. The games have their origins in Out of the Park Baseball, a deep-dive baseball simulator that MLB Manager tries to simplify down. There’s still a lot of deep aspects to this game, but where you’re running a team in a current-day, historic, or entirely fictional league. There’s a lot of information to take in, but you can manage games on a pitch-by-pitch level, or only on a larger, general-manager-only level, dealing with finances and letting the computer manage all the games. The problem is that the core game is almost identical to the iOOTP games, and granted, baseball simulators don’t need massive updates. They need a few tweaks to catch up to current trends, the occasional roster update, and necessary changes based on user feedback.

This year, the big change is visual. MLB Manager 2017 boasts an overhauled look. A lot of the menus look the same and are structured the same way, but the cartoon characters are gone, and the whole game looks sleeker and more professional. Perhaps the cartoon characters added some personality, but I don’t really miss them after several iterations of this game. Menus now display a lot more in the way of statistics and information than they did before, even text boxes look better and use more of the high-resolution displays that are now the norm. Still, the core game is the same. And that means many of the annoying quirks and flaws are still here, and a few new ones have popped up. 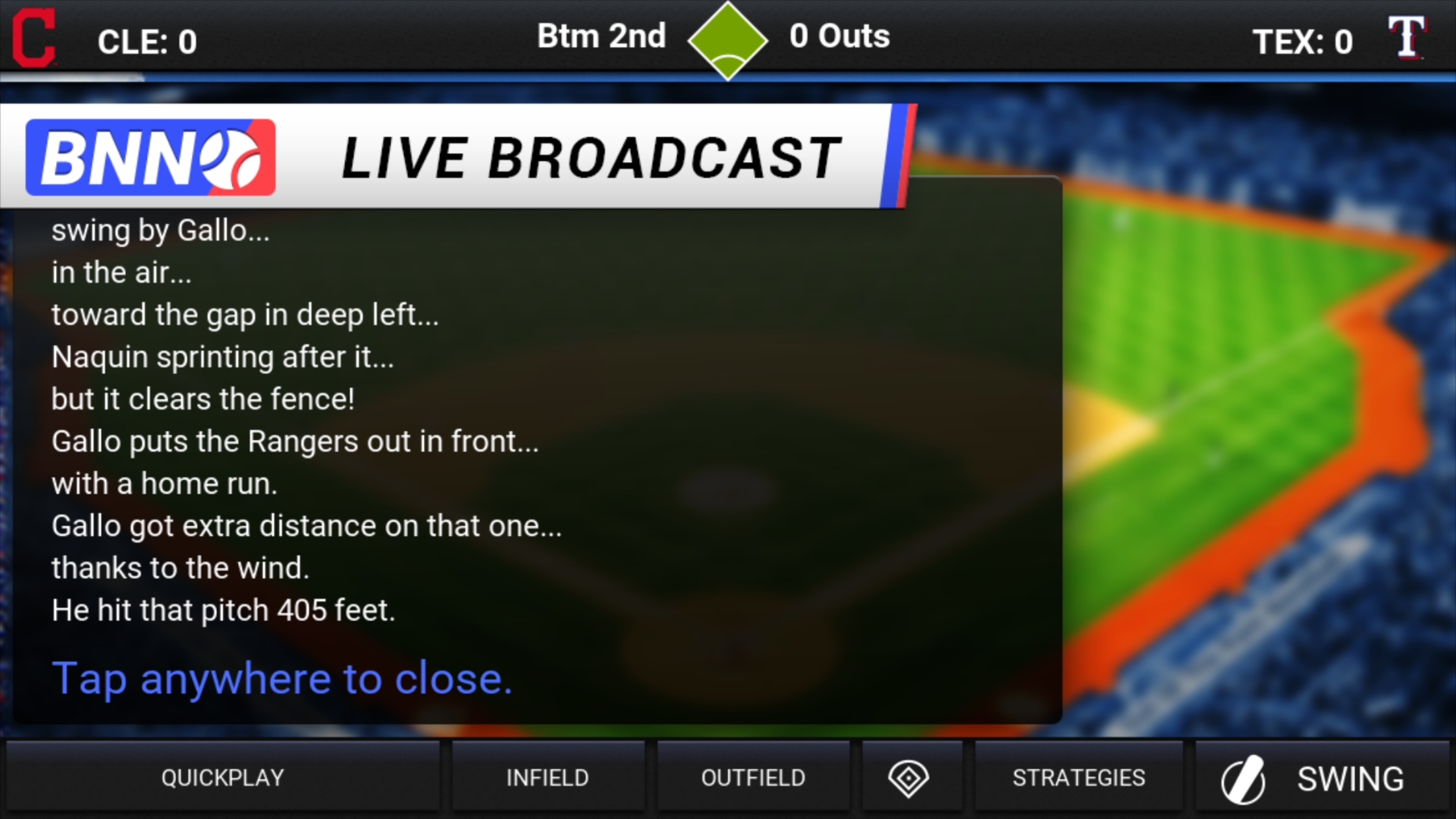 Some of the language of the simulations feel like they need to be changed. For example, the talk of sliding hard into second base feels outdated when 2016 saw the initiation of the new sliding regulations. Guys just aren’t sliding in hard to second base as much because they don’t want to risk the possibility of getting an automatic double play due to interference, as well as the potential for gruesome injury to the fielder. And sometimes, the embarrassment of the slider. As well, some of the talk of guys arguing calls or shooting nasty looks to umpires when involving close plays on the base paths has been replaced in the age of instant replay by guys largely shooting looks over to their dugout, pleading for a replay call. And the lack of that feels like a missing aspect. I guess you could justify it by saying that all calls in the game are technically correct, but there’s still something about that which feels just unrealistic enough to be jarring.

A bug in the current version is that you can’t move the pitcher slot around in the lineup, or decide to bat your pitcher instead of the DH. Both these things happened in 2016! In fact, there’s strategy with batting your worst hitter 8th, so that your 9th hitter serves as a second leadoff man, though the tradeoff is that a worse hitter might get a few more plate appearances over the course of 162 games, and you may have to pinch hit a pitcher sooner. But you can’t do it in this year’s MLB Manager, though this is a bug as you could in previous years. You can set the current day’s pitcher as the DH, and they’ll remain in the lineup even if taken off the mound. While I believe this is how the DH rule works in college for two-way players, in MLB the pitcher can’t also be the DH. Like when Madison Bumgarner hit for himself at Oakland in 2016, he was there in the lineup as the pitcher, not the DH. He’s one of the few players where you would possibly consider it if the rest of your team is bad – maybe Jake Arrieta or Travis Wood would be decent options as well, or if you wind up with a drafted player who has some two-way talent. Still, I hope this gets fixed because it is an MLB rule, and I would like to see authenticity whenever possible. 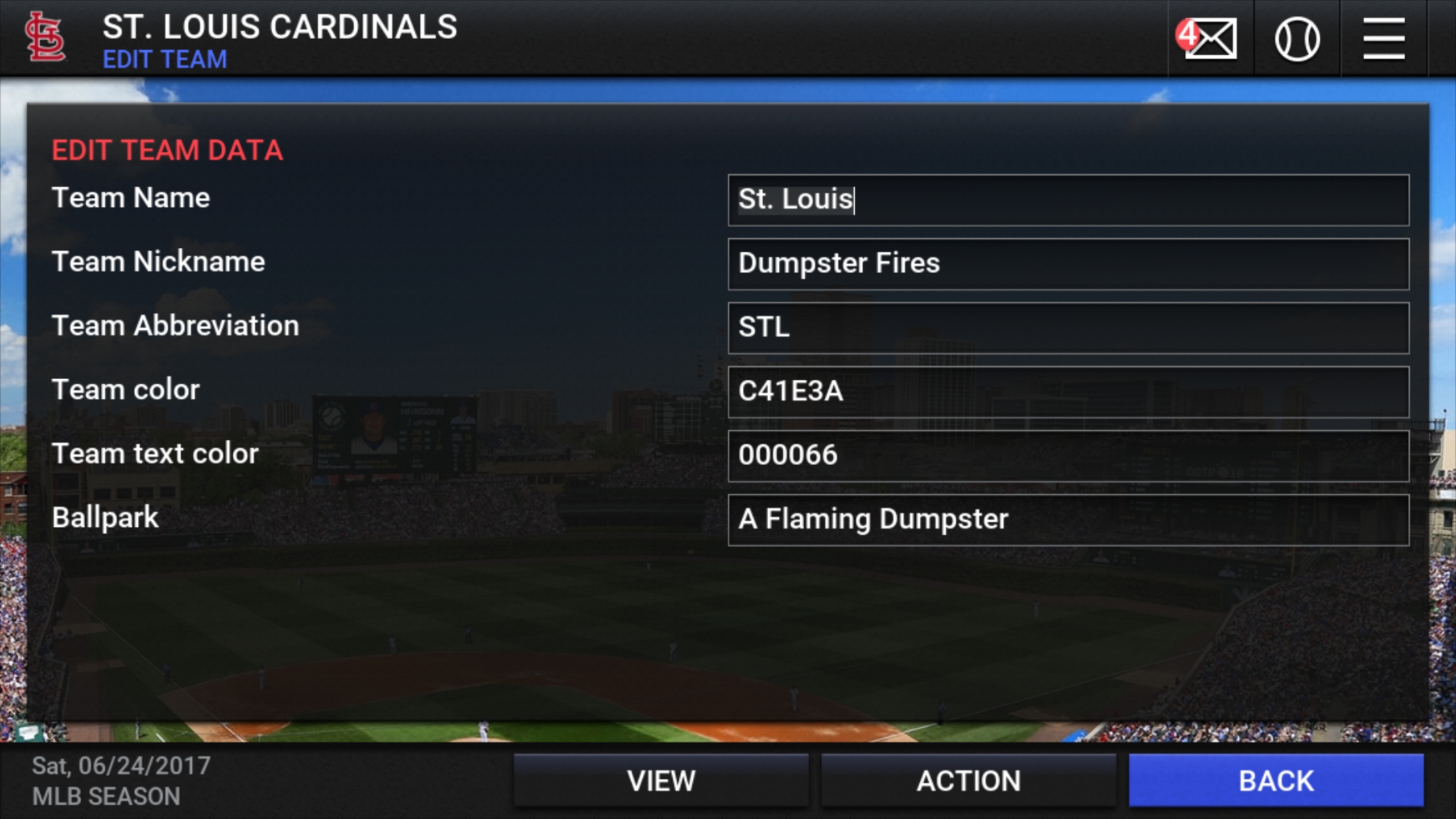 While I’d be fascinated to see this game work in portrait mode for ultimate portable play, MLB Manager remaining virtually the same since its inception has meant a few things. One, as processing power has increased, the wait time for simulations has shrunk. Two, the game drains virtually no battery. It’s far superior to using Twitter. Also, the game still supports being able to quit at any point, and continuing at the exact moment in the game you were playing. I know people want this feature in more titles, and MLB Manager has it perfect.

I still love many of the little things that you can mess around with in this game. One thing I enjoy is that you can change is the name of each team. Think Cleveland’s team name is racist? Not in your world! Think the St. Louis Cardinals should be renamed the St. Louis Farts that play at A Dumpster Fire, or that the Los Angeles Angels of Anaheim is the dumbest team name in existence and that Anaheim is so far away from Los Angeles with rush hour traffic that it doesn’t actually count as Los Angeles? The world is your oyster. You can configure teams’ city names, colors, nicknames, and stadium names to your heart’s desire. You can’t upload your own logos, so the Tampa Bay Rays renamed the Montreal Expos still have the Tampa Bay logo. The player editor options are great if you see something that’s just not quite right (or if you want to add yourself to the game as a superstar, no judgment here, folks). And again,, you can play this game as granularity as you want. I like playing each game myself, in particular because I like managing my bullpen in ways that the AI won’t do. The AI management is meant to be realistic, and “real" managers handle their bullpens in the most asinine manner. I’m bringing closers in the 6th, dogs and cats living together…mass hysteria! But that’s the fun: I get to play the game my way. Despite all my complaints, they’re because this is a game meant to be a long-term experience. And the problem with that is that it can be easy to pick nits over time. 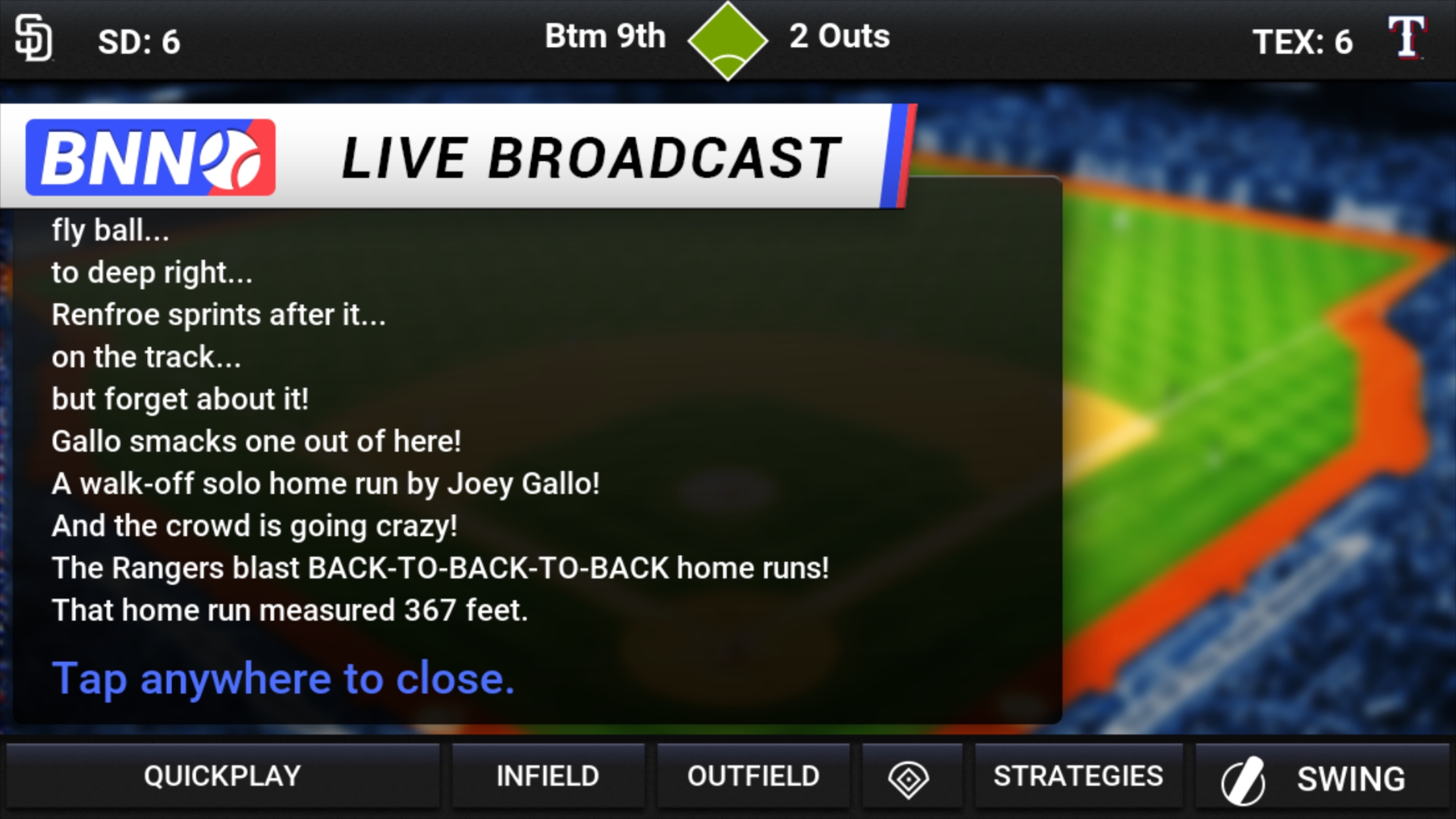 Perhaps my problem is that I won’t get what I want. MLB Manager is intentionally meant to be a simpler experience compared to the desktop OOTP. Maybe the solution is to get a Windows tablet, as shocking as that may be to express on this website. I love playing MLB Manager wherever I feel like, but after seeing the same game with subtle tweaks on a year after year basis since 2011, I know I’m ready for something bigger. I want full rules for roster management. I want full minor league affiliates. I want more control. I might not get it because it could be overwhelming to someone wanting to play casually, but I’m starting to realize that I maybe out-growing MLB Manager and need to just accept that I should play OOTP on my laptop from now on like the baseball-loving degenerate that I am.

Not that I won’t keep playing MLB Manager and struggle in vain against the baseball gods to make my Texas Rangers win a World Series. Because despite all my complaints about little things, I’m hooked once again. Send help. This is the only way to get a good, deep, baseball simulator on mobile, and it is a good way to get a taste of what it might be like in comparison to a full-fledged game. If it’s your first time, I’m sorry about the rest of your life that you will no longer have because you’re stuck managing a bases loaded, one-out situation in an August 2023 game. It could be the most value you get out of a $4.99 game. If the little annoyances got to be too much in earlier years, well, unfortunately, many of them are still here. But whether you can see the forest for the trees is question you’ll have to consider for yourself.