Being a fan of the previous Meganoid games, and really pretty much everything from Orangepixel, I was really excited to see that a reboot of sorts was in the works. It didn’t take long either, just a few months, before Meganoid 2017 ($3.99) arrived in the App Store this week. And after just a few minutes playing… I didn’t like it. In this new Meganoid, you get thrown right into the fire without a ton of instruction, and I almost instantly died. Restarted quickly and… died again. Then I died again. Followed by another death, and another. You get the idea. Meganoid 2017 is not an easy game. 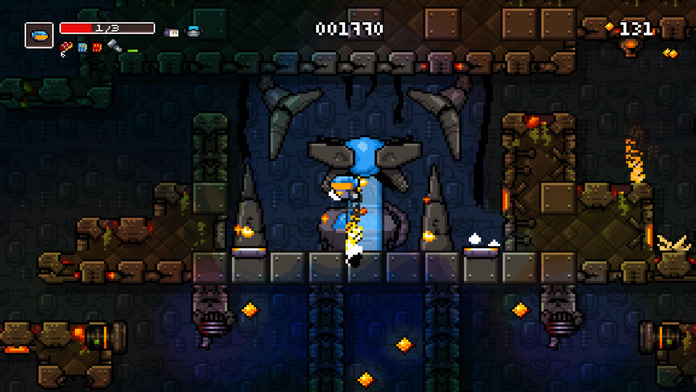 Here’s the thing though. Where the first two Meganoids were more traditional platforming games, this one is a roguelike. I know that term gets thrown around left and right nowadays, but Meganoid 2017 embraces the key elements that make the roguelike genre tick. The levels are procedurally generated from a huge set of pre-designed chunks, so the levels feel different every time you play while still feeling familiar and allowing you to learn the various ins and outs that’ll help you advance.

What really cracked Meganoid open for me though was the many gadgets you’ll come across as you play. There’s a really wide variety of things you can do in the game, and different ways you can manipulate the rules of the game, and how you tackle each and every challenge will come down to your personal preference and your own ingenuity. That’s my favorite thing about roguelikes, how they deal you a random hand of cards and force you to play them to the best of your ability to be successful. I get that same feeling from Meganoid.

This game is freaking hard, though. Like, ouch hard. If you aren’t prepared to die dozens of times over and over again, or if you’re craving a normal level-based platforming game, then this might not be the right fit for you. But if you love dying dozens of times because the sense of satisfaction you get from that one glorious run where everything goes your way and you play your cards to perfection, then Meganoid 2017 should scratch that particular itch well. I feel like I’ll be peeling back the layers of this onion for a long time.