Journey to Un’Goro, Hearthstone‘s (Free) next expansion, is getting closer to release, so every day we are getting more information about what to expect. Today, Peter Whalen, Senior Game Designer, wrote a blog about Quests, one of the two main keywords that will be added to the game come early April. If you don’t know what Quests are, they are cards that offer pretty huge rewards if their conditions are met. Each class will have one of them in Journey to Un’Goro. The Quest idea has been in the developers’ heads ever since Whispers of the Old Gods, but it has changed quite a lot since the original idea.

While the rewards have pretty much stayed the same, everything else about Quests has changed. In order to make them feel as much like normal cards as possible, they had to fit into the already-existing rules. So, one of the changes the mechanic saw is going from cards that transformed into your hands to something that both players can see progress, which is why they now look more like Secrets.

Initially, Quests cost 0, but the developers decided that making them cost 1 made them a bit more impactful. And since they were making 9 Quests, they wanted to make them feel different from each other, and I think so far, they’ve managed to do that (remember, we haven’t seen all of them yet). Not all of them are straightforward, though; for instance, Rogue’s The Caverns Below has you playing four minions with the same name, which will require either bouncing cards back into your hand or copying them. If you succeed in completing the Quest, you get a 5-mana Crystal Core spell that makes your minions 5/5 for the rest of the game. 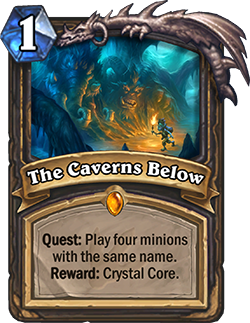 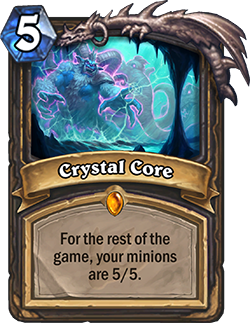 What do you think of the Quests so far? I like them because they make each class feel even more unique and should lead players down some interesting deck-building paths. At the same time, I’m pretty sure balancing those 9 Quests is near to impossible, so I wonder which ones will end up feeling OP and which too weak to bother with. Still, I can’t wait to get my hands on some of them and see how they play out.