There’s something about a first-person dungeon crawler that just pulls me in and tugs at my brain. They’re a nice contrast from the more talkative RPGs, which often involve intricate stories with large casts of characters. A dungeon crawling RPG will generally have a handful of NPCs, if that. Most of the time, it’s just you and a big dungeon that you have to conquer one small piece at a time. Filling out a map, watching the floor count go up, raising your party to the point that earlier challenges are trivial, and finding hidden secrets are about as straightforward as markers of progress get, but somehow it still works for me every time. Whether or not you get into Crescent Moon’s latest publishing effort, The Deep Paths ($3.99), is going to depend on whether you share that particular quirk with me or not. It’s not the sort of game that is going to convince anyone who isn’t already predisposed, but those who like to live their gaming life one uniform-length step at a time should be satisfied.

The Deep Paths comes to us from Steve Jarman, who previously developed Coldfire Keep ($4.99) and Descend RPG ($1.99). It’s very much along the same lines as those two games. You guide a group of adventurers into a multi-floor dungeon full of puzzles and monsters and try to come out alive. The game is played entirely from a first-person perspective, and plays out in a hybrid turn-based/real-time fashion as in games like Eye of the Beholder or Dungeon Master. That is to say, you move one turn at a time, but time can pass whether you take an action or not. In combat, you have to move quickly, as each character will only attack when their turn comes up if you tell them to. Many puzzles will also require you to move with speed if you want to make it through. Doors will often open for a short period of time only, and certain traps require good timing to get past. 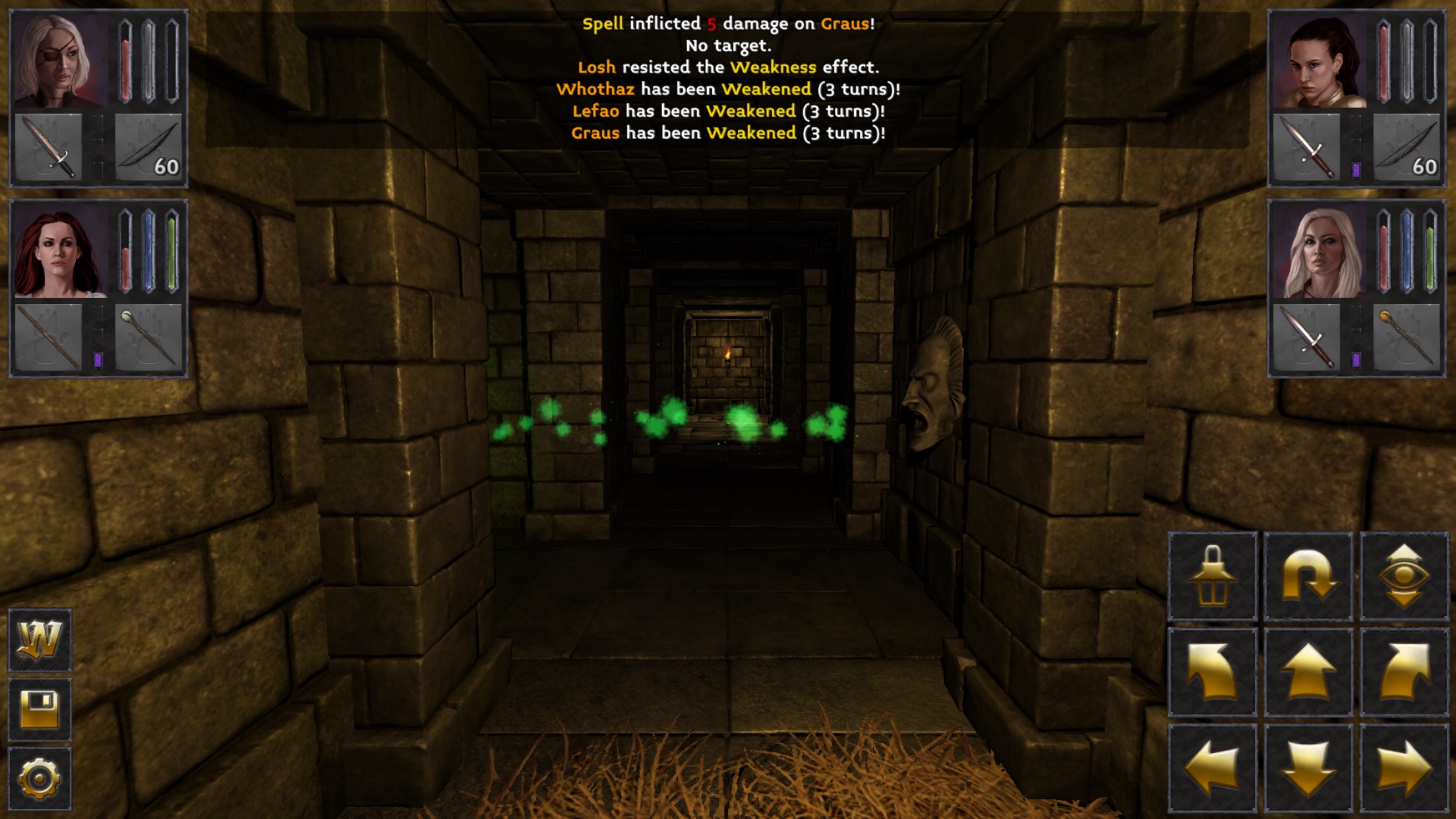 The high-watermark for this kind of game on iOS so far is Legend of Grimrock ($4.99). Regrettably, The Deep Paths isn’t really in that game’s league. If you’ve never played this kind of game before and want to get your toes a little wet, I’d advise trying Grimrock first. The Deep Paths has some issues that can probably only be forgiven by someone who wants to play this genre to begin with. That said, there aren’t exactly a ton of first-person dungeon crawlers releasing on the App Store, and the problems in The Deep Paths aren’t enough for me to tell a hungry genre fan to shove the plate away. In fact, when things are at their best, The Deep Paths is nearly great. It’s definitely Jarman’s best so far, and feels light-years ahead of Descend RPG. The Deep Paths also addresses some of the complaints people had about Coldfire Keep, though some of that game’s irritating issues remain.

You’ll start off by rolling up your party of four characters. There are three different job classes to choose from, so you’ll have to double up on at least one of them. Warriors do more or less what you would expect, being the best at melee attacking and taking hits. Rogues aren’t quite as strong as warriors, but can pick the locks on treasure chests and detect hidden doors. Basically, you’ll need one of them. Mages are the only characters who can make use of magic wands, and can also brew up potions. They’re quite weak at melee combat, so make sure you keep them in the back row. After you’ve put together your party, you get to play a sort of tutorial area. It’ll teach you the basics and give you some supplies to start with. 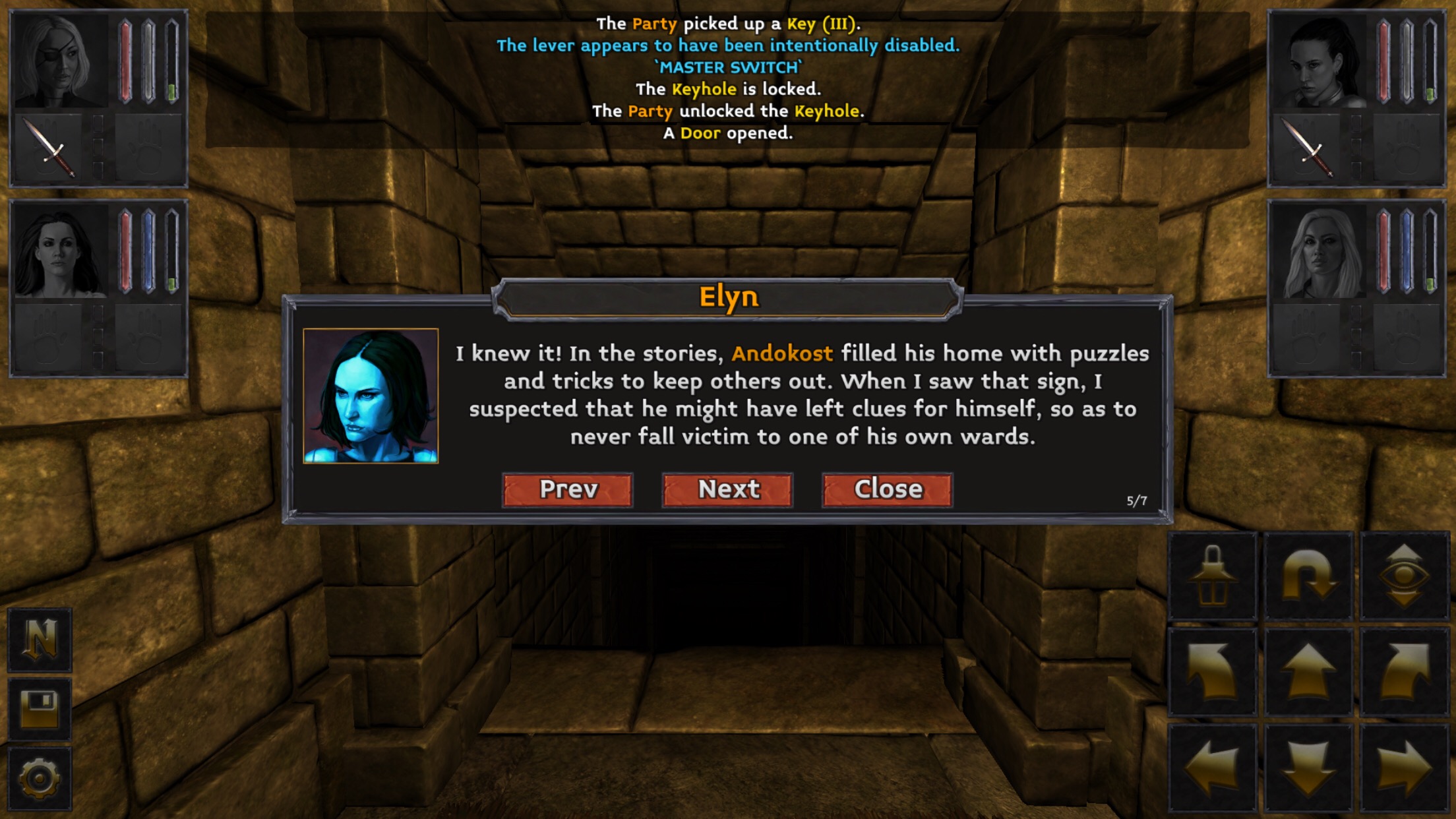 This is probably where you’ll realize one of the bigger problems with The Deep Paths. The user interface is really cumbersome and somewhat confusing at times. Moving around uses on-screen buttons, which works well enough. Picking up some objects requires a tap, while others need you to drag the item to a character portrait to put it in your party’s inventory. Some items can be automatically used by tapping on what you’re trying to use, but others will require you to drag the item out of your bag with a double-tap and place it on what you’re trying to use it with. If you’re playing on an iPhone, you get the additional fun of some of the buttons being a little too small to work with accurately. It feels like an interface designed for a roomy monitor with a mouse pointer. Saving and loading are especially annoying for how small the elements you need to touch are. Now, to be fair, this is a little bit better than the set-up in Coldfire Keep, but it’s close enough that if you had problems there you probably aren’t going to be happy here.

Another carry-over problem from Coldfire Keep comes with the combat. It’s just not very fun or all that deep. There are a few tactics you can employ to help your odds, but you’re mostly going to be doing the same set of actions for the entirety of the game. Whether or not you survive each encounter will come down to luck or pure stats. There aren’t enough enemy types, or rather, not enough enemy behaviors to really make things interesting. Just fire away your projectile attacks at a distance, and when the enemy closes, start hacking away. You can pull off a little side-stepping trick if there’s enough space to work with, but there often isn’t. So you just tap those weapons to attack, wait for the cool-down, attack again, and hope the bad guy runs out of hit points first. One nice thing is that you’ll automatically regain health and spirit points over time, and even dead characters will bounce back to life after a little while so long as someone is still among the living. Generally speaking, encounters are spaced out such that you have plenty of time to recover while walking, or no time at all, so waiting around to refill your life and spirit is rarely a useful tactical move. 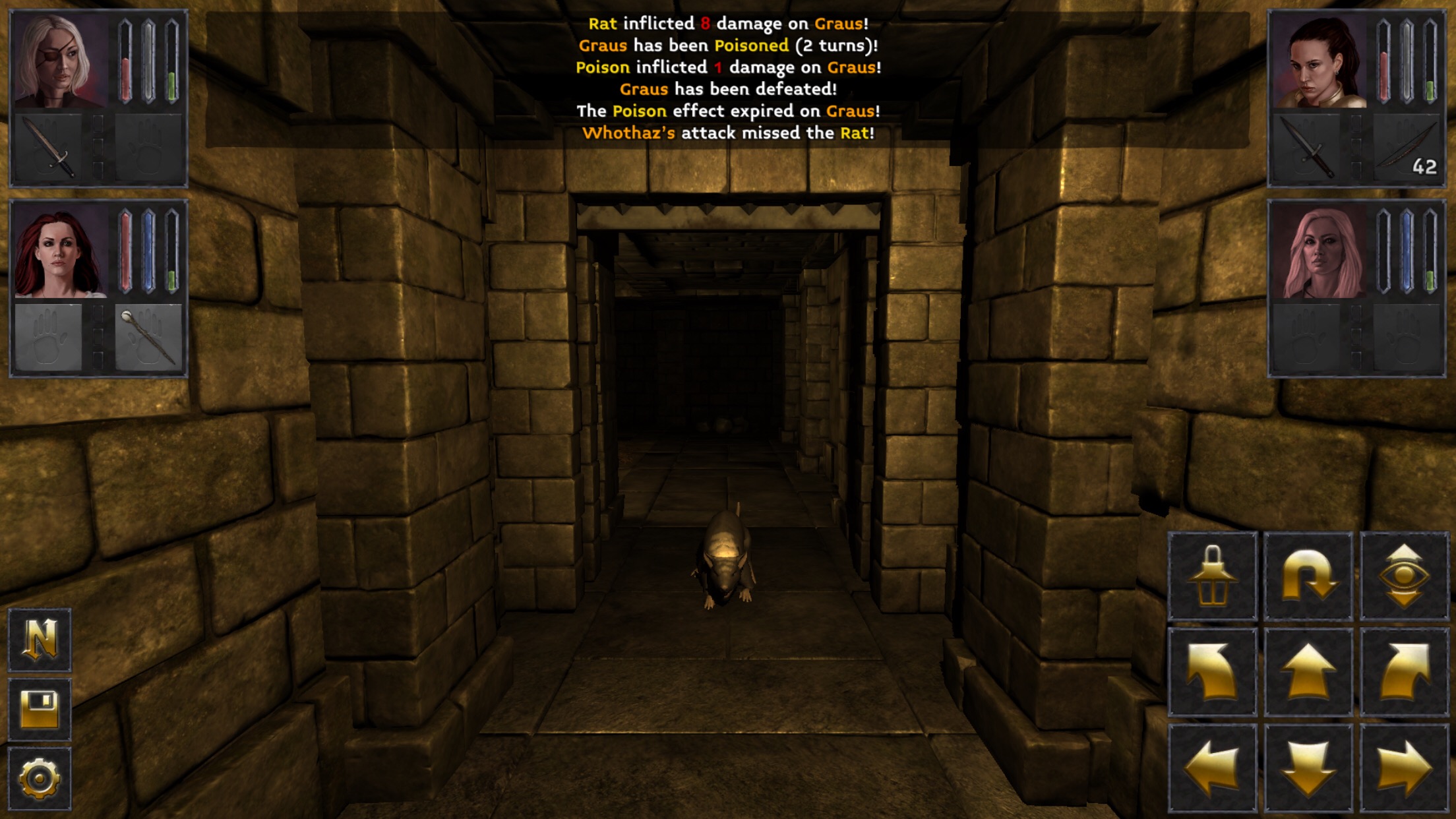 While the combat is something of a downer, the puzzles and exploration aspects are even better than they were in Coldfire Keep. It took me in the neighborhood of 15 hours to get through the game when all was said and done, and I know I missed a couple of secrets along the way. I don’t know that I’m particularly inclined to go back for them at this point, but if you were being more thorough than I was, The Deep Paths would certainly come out a bit longer. The dungeon design is once again quite solid with lots of side paths, alternate routes, and secret rooms. One thing I really like about Jarman’s approach to dungeon design is that unlike some other dungeon crawlers, he doesn’t treat floors as totally separate entities from one another. You’ll often find yourself heading up and down at different positions to find the way forward.

Unfortunately, that complexity is a double-edged sword. While first-person dungeon crawlers have made something of a resurgence lately, almost all of them have seen fit to include some kind of auto-mapping feature. Yes, I like drawing maps too, but the truth is that most people don’t want to use a pencil and paper while they’re playing games these days, particularly in a game they’ll likely be playing on the go. The Deep Paths makes one concession to that end. You can find maps of each floor hidden around in various places. Rather awkwardly, however, the map is drawn relative to your direction, and with no clear markers about which way is which. Some people will be okay with that, but as the dungeon floors get trickier, the maps become increasingly useless, even if you do manage to find them. I’m not sure what the best option here is, since a full-on automap really goes against the spirit of what this game is going for. You’re almost certainly going to need maps one way or another, though, and the ones the game provides aren’t going to work for everyone. 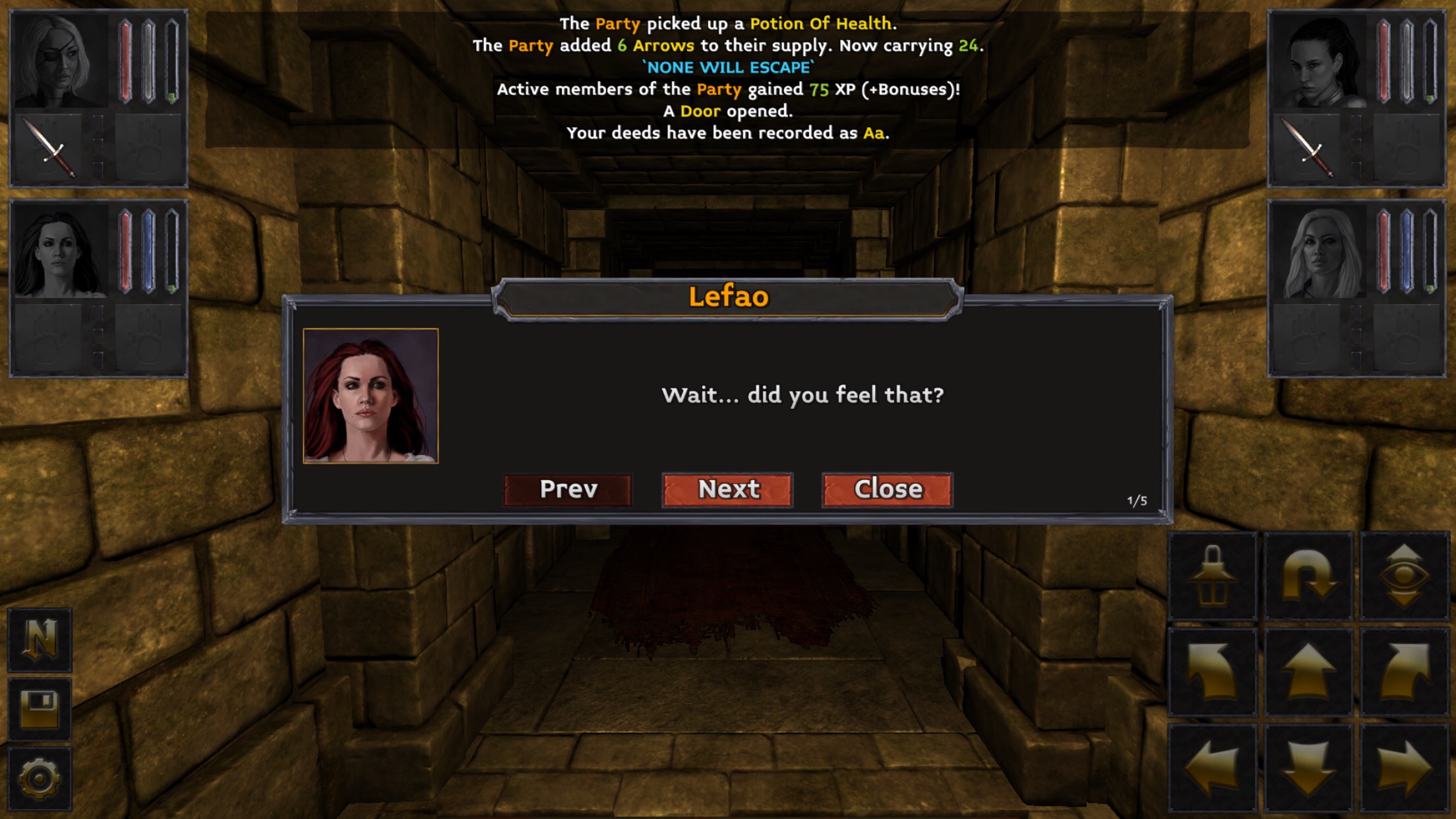 The puzzles are a nice grab-bag of different tasks and teasers, and some of them require some real thinking. In Jarman’s usual style, your progress forward is typically blocked by a door that requires a key. Locating that key will usually require you to solve one or more puzzles or find a secret area of some kind. It’s rare for you to get keys too much before you need them, so most of the time, you know that the answers to the puzzles can be found in a particular area. Sure, you can brute force your way through some of them, but that’s always the case with games like this one. Figuring out the answers yourself is quite satisfying. I feel like the puzzle difficulty follows a smooth curve that builds on things you’ve already solved to create more interesting and challenging set-ups. This time around, you can take your time solving puzzles without worrying about hunger. That particular mechanic was a source of annoyance in Coldfire Keep, so I’m not terribly sad to see it gone.

While this sub-genre doesn’t always go hand in hand with having much of a story at all, The Deep Paths takes a couple of stabs at justifying why you’re in the dungeon, a reason for the puzzles to exist, and even some minor character-building. Your party members will sometimes chat with each other, though that serves as instruction as much as it does world-building. It’s not much, and I certainly wouldn’t come into this game expecting much from a story point of view, but I at least appreciate the attempt. It helps keep you engaged early on while the game mechanics get themselves good and sunk into your brain. 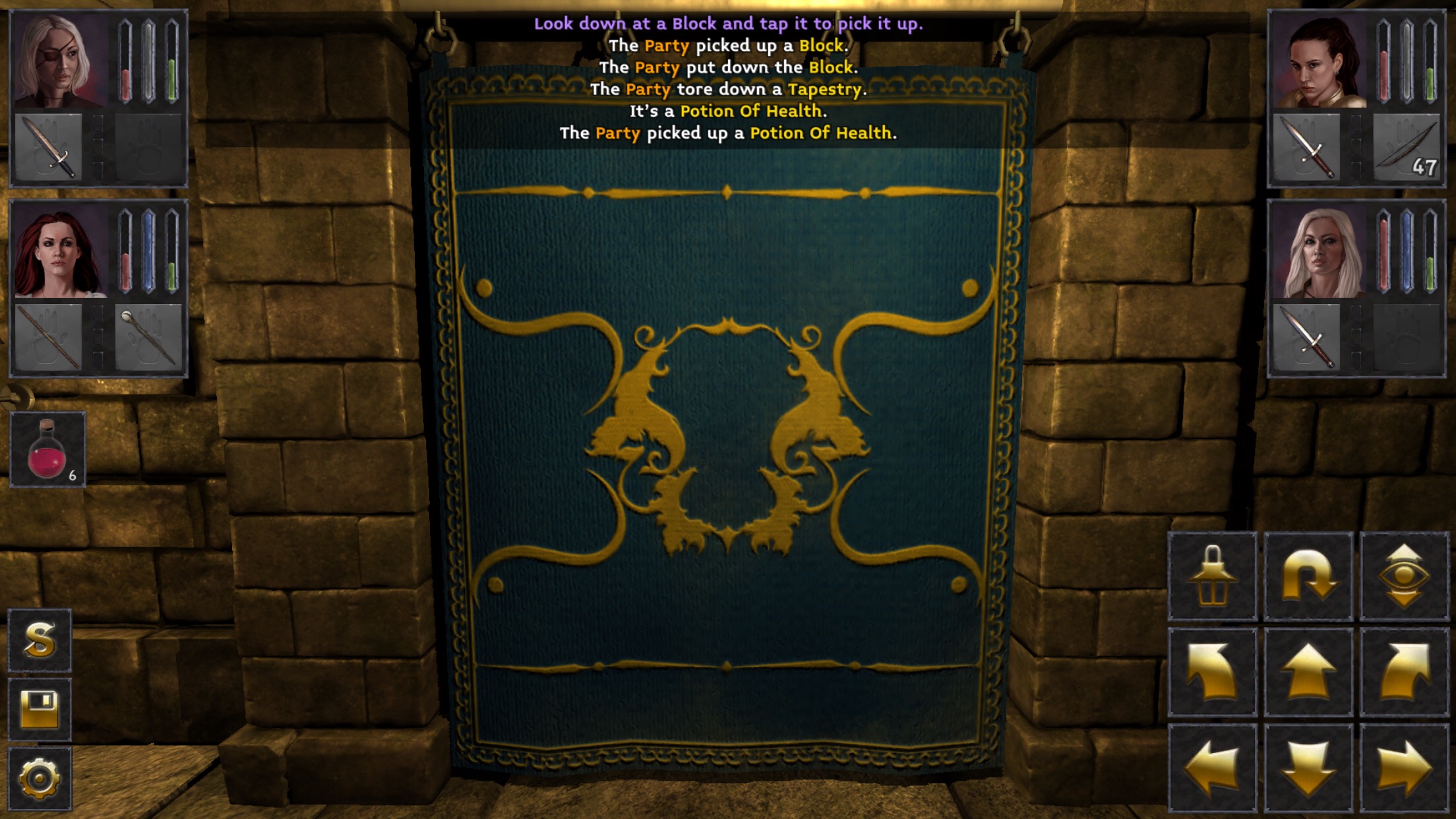 Fans of the genre who are willing to overlook some irritating flaws will find The Deep Paths worth exploring. It nicely demonstrates the developer’s increasing skill in designing this kind of game, and is easy to recommend over its immediate predecessor. It errs more towards a vintage feel than a modern one, however, and that can sometimes be as off-putting as it is inviting. It spends little time building up its difficulty both in terms of combat and puzzles, which when combined with its overall unfriendly UI and mapping makes it a hard game to suggest for a general audience. Those who love first-person dungeon crawlers should check it out, though. It’s no Grimrock, but I think there’s plenty of room in the pool for decent efforts along with that giant.