I’m a huge fan of Nimblebit’s new game Bit City (Free), which is a cool take on the standard clicker game. Despite the relative simplicity of games in the genre to begin with, there are still plenty of common sense tips, as well as some game specific strategy that’s worth discussing. So, if you’re interested in maximizing your earning potential in the game, check out the following tips and guidance. Take note that some of the tips below may seem obvious, but they are worth repeating just in case for newcomers to the genre.

Always Make Sure Your Town Is Constantly Upgrading

Ok, yes this is the most obvious tip when it comes to Bit City. Heck, the game’s tutorial mentions it to you as well. But it’s important to reiterate for a few reasons. First, plot upgrades are an important element for increasing your earnings. Second, if you’re doing a mission that has you constructing a certain type of building, upgrades are the only way you’re going to have a chance of building it. Finally, any time your upgrade queue isn’t maxed out is wasted time while playing. Once you get to the upgrades that have bots, you can not pay as much attention. However, until then, it’s all done manually so it’s up to you to keep the timer running. 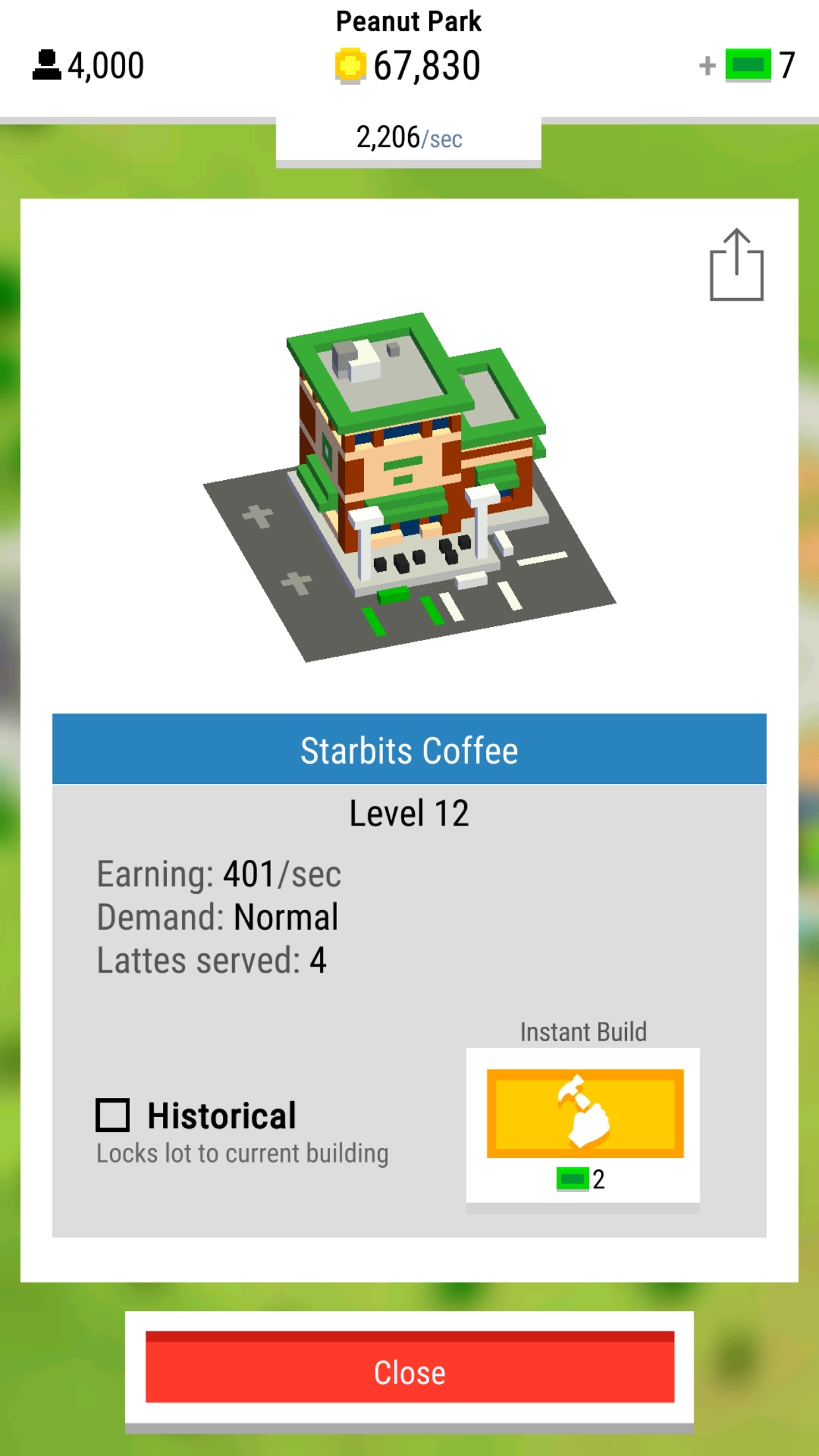 Always Login When Your Bank is Full

Ok, I lied, this is one of the most obvious tip I can provide (and basically applies to every similar freemium title) Make make sure you periodically log into the game whenever your bank is full. Unlike most games, simply launching the game and tapping one button is all you need to collect your coins and restart the coin collection. This becomes important as you get further and further into the game as you’ll want to get that coin windfall whenever you can.

Obviously, the goal of each city is to earn enough coin to build out all the plots and hit the requisite population needed to advance to the next city to take on. Within the Government Building are a large amount of town upgrades that will provide a significant contribution to your perpetual earnings. While you may want to immediately focus on building on as many plots as you can I highly suggest that you pay attention to the Town Upgrades and keep a healthy balance between building and upgrading. My rule of thumb is prioritize Town Upgrades until you get to a point where the upgrades are outside of your normal range of spending. After that, build out a few plots, upgrade until your earning goes up to the point where you can upgrade some more, and repeat.

Within Town Upgrades, Prioritize Based on Playstyle

Town Upgrades can be classified very broadly into three different types. There are the upgrades that focus on your perpetual earnings (such as making certain zones more profitable), there are upgrades that focus on making the coin bonuses from cars, plans and so on more lucrative, and there are upgrades that impact the general gameplay of the game (such as auto-upgrade bots). When deciding which upgrades to purchase, do it based on your playstyle. For example, if you are highly focused on coin bonuses, pursue those upgrades first. If you find yourself taking a more passive approach to Bit City (if you aren’t able to check in as much as you’d like), focus on the raw earning upgrades and the bank. If you’d like to truly maximize your potential, make sure you put in a few upgrades on the bots so you can increase your general earnings via plot upgrades while focusing on the coin bonuses. 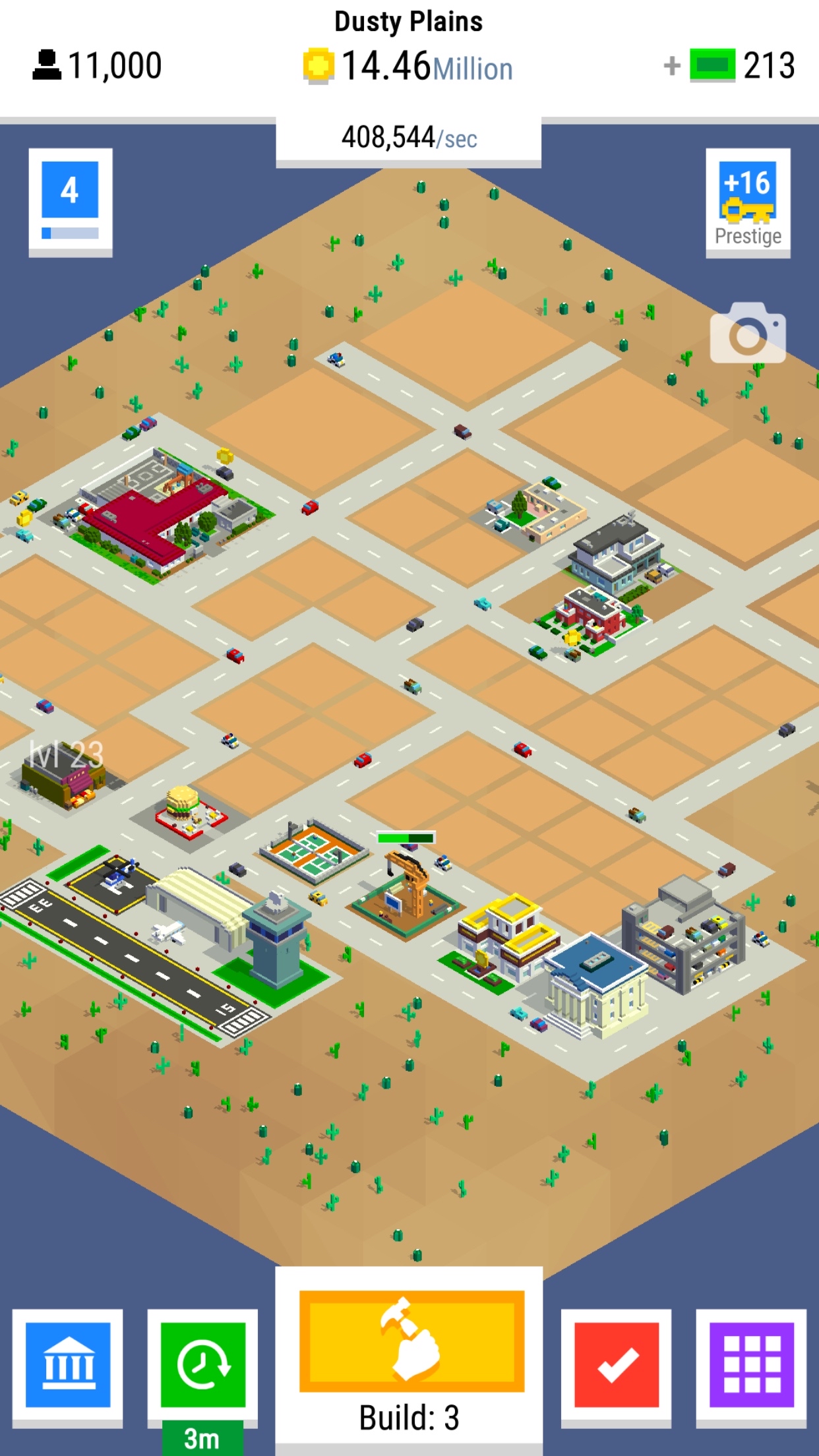 Once You Get to Later Maps, Make Sure to Zoom Out Once in a While

The reason why it’s worth mentioning the need to zoom out is because once you’ve launched a few boats and planes, it’s a certainty you’ll most likely miss them once in a while as they are flying across the large maps. Zooming out lets you see exactly where they are and to verify if they have any bonuses available. If they do, then simply tape on them, zoom back into wherever you were focusing, and continue on your way.

Use Double Time To Your Advantage

One of the freemium elements that Bit City employs is the ability to essentially shorten all timers in half by doubling the speed of the game. Not only does this mean that your raw earnings are twice as much, but coin bonuses on your vehicles appear faster as well. Double time can be activated by spending Bux.

Another way offered to activate ten minutes of double time is to watch a 30 second ad on your phone. Considering 30 seconds of your time leads to saving ten minutes in way production in terms of your earnings, I really can’t think of a reason not to watch an ad whenever it’s presented to you to get that ten minutes of goodness.

Use the Historical Tag for Certain Missions

Bit City has a perpetual mission system that serves as a great way to slowly accumulate bux as reward. As you continue to unlock more and more missions you’ll eventually get quests that have you building a number of the same building within your town. Once you get to that point, make sure you start utilizing the ‘Historical’ tag once you actually start getting the buildings you need. In order to fulfill the mission the number of buildings requested must simultaneously exist so if you don’t tag them there’s good chance a rebuild will have you lose a building before the others can be built. 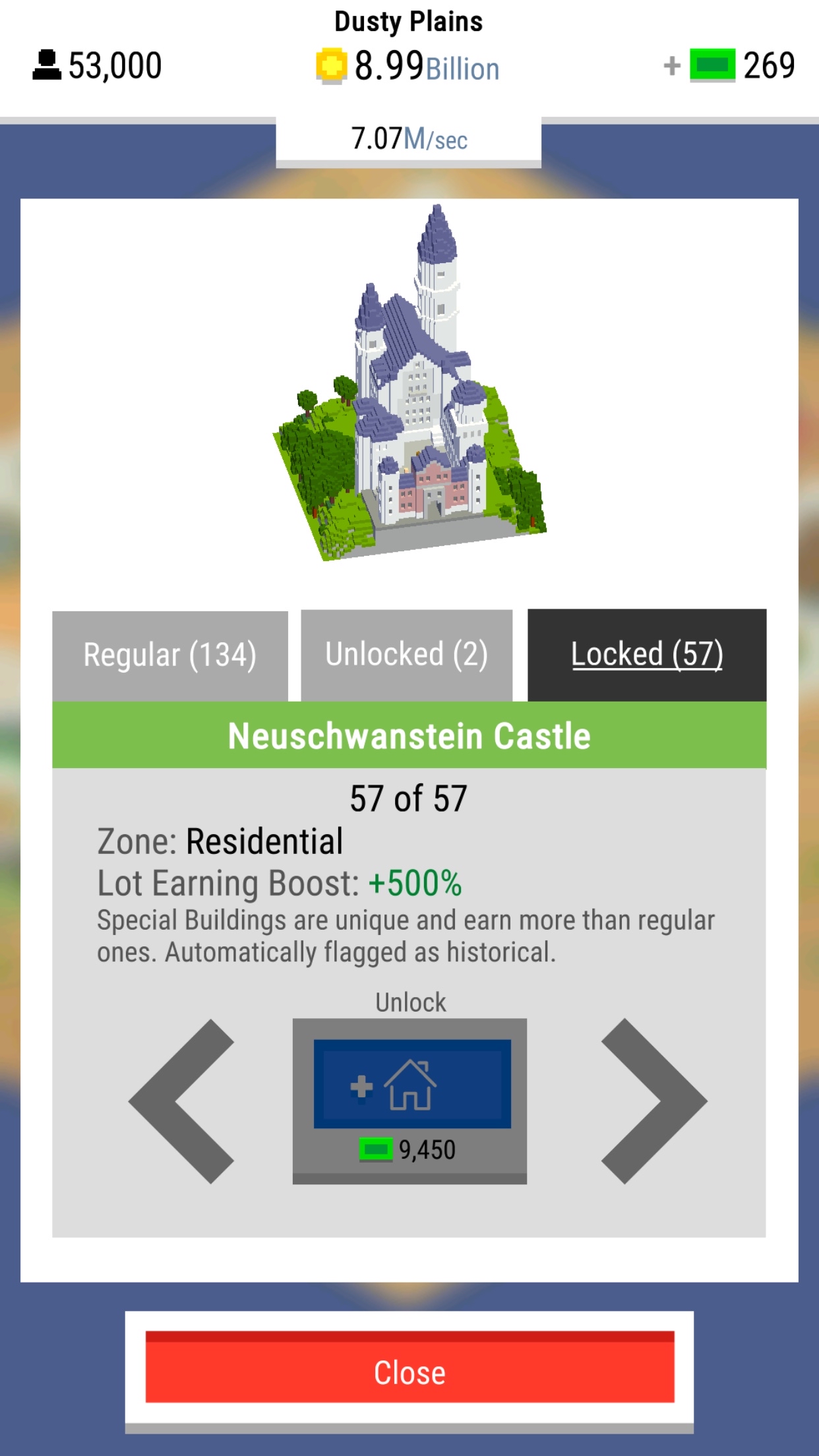 Your rate of coin collection, as well as the maximum amount of coins that can be collected outside of the game increases with each build command (whether it be a new zone or an upgraded building). In addition bank upgrades are very important as they increase the total amount of time you accumulate wealth (after a certain amount of time, you simply stop collecting, which is when you’re notified that the bank is full). Thus, it goes without saying that you want to make sure that your town is generating a healthy amount of coins for a decent amount of time before you call it quits for a session. Obviously there’s a very large rabbit hole you could fall down into when it comes to deciding how much “is enough,” but at the bare minimum don’t start a new town and not build anything before you leave the game.

Keep Your Zones Built in Balance

Now, does the high and low demand scheme balance things out in the end? I’m not entirely sure, but in my view it makes sense to me to keep everything in balance so that every zone is earning the standard amount that they should. 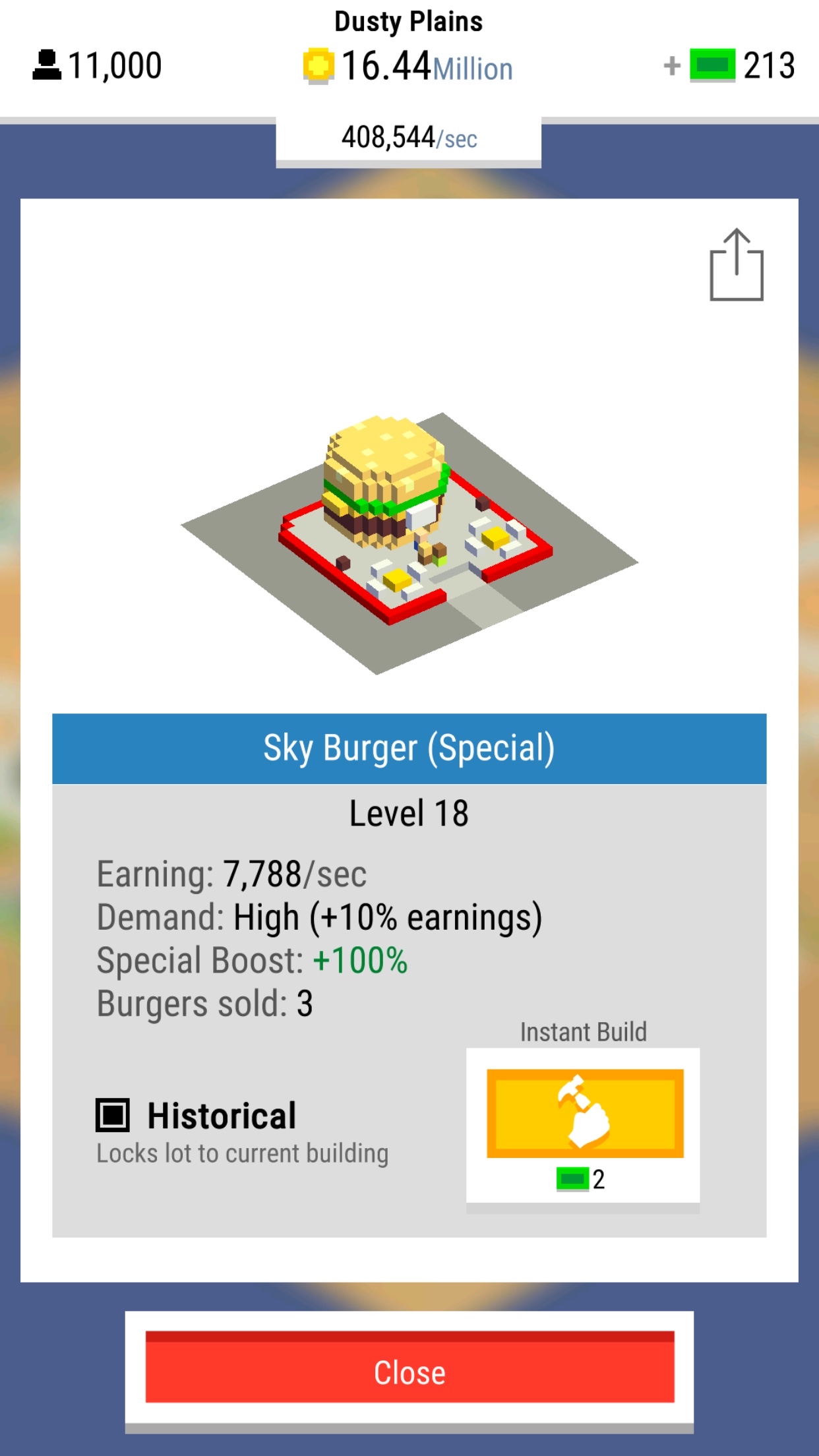 Get a Few Special Buildings Built Before Working on Game Upgrades

So you’re completing missions and tapping on those vehicles to earn those bux. Well, what exactly can you do with them? Besides speeding up the clock (which we’ve already recommended you don’t spend them on), the other things you can do with bux are purchasing game-wide upgrades that span all cities and prestiges and you can purchase special buildings that can be randomly built. While the game upgrades have some pretty cool upgrades, I highly recommend purchasing a few special buildings early on. First, each special building built has a very large multiplier, meaning that they earn a ton more than a normal zone. Second, special buildings can come into play from the very first town and beyond. Third, most of them just look cool. When it comes to choosing which ones to build, I suggest buying at least one of each zone, both large and small. That way, you can get a chance to get an extra boost no matter which zone you’re upgrading (keep in mind that you can only build one of each special building per town).

Don’t Necessarily Immediately Start on the Next Town When Unlocked

As we’ve stated earlier, the goal of Bit City is to reach a certain population level which is entirely contingent on players constructing buildings on every available plot of land. Once you reach that population goal you’re able to advance to the next city, where most everything resets and you have a bigger population goal to reach.

You may be tempted to immediately advance to the next town as soon as you can, but I’d recommend doing a quick check of your city upgrades and building upgrades before you do so. Have you unlocked all the upgrades that increase your baseline earnings? Do you have spare cash to level up your bank? If you have the cash available to upgrade these elements I highly recommend you do because they will increase the amount of coins that will automatically be applied to your next town. Sure, you’re not increasing that amount by that much, but honestly every bit helps when you start over. 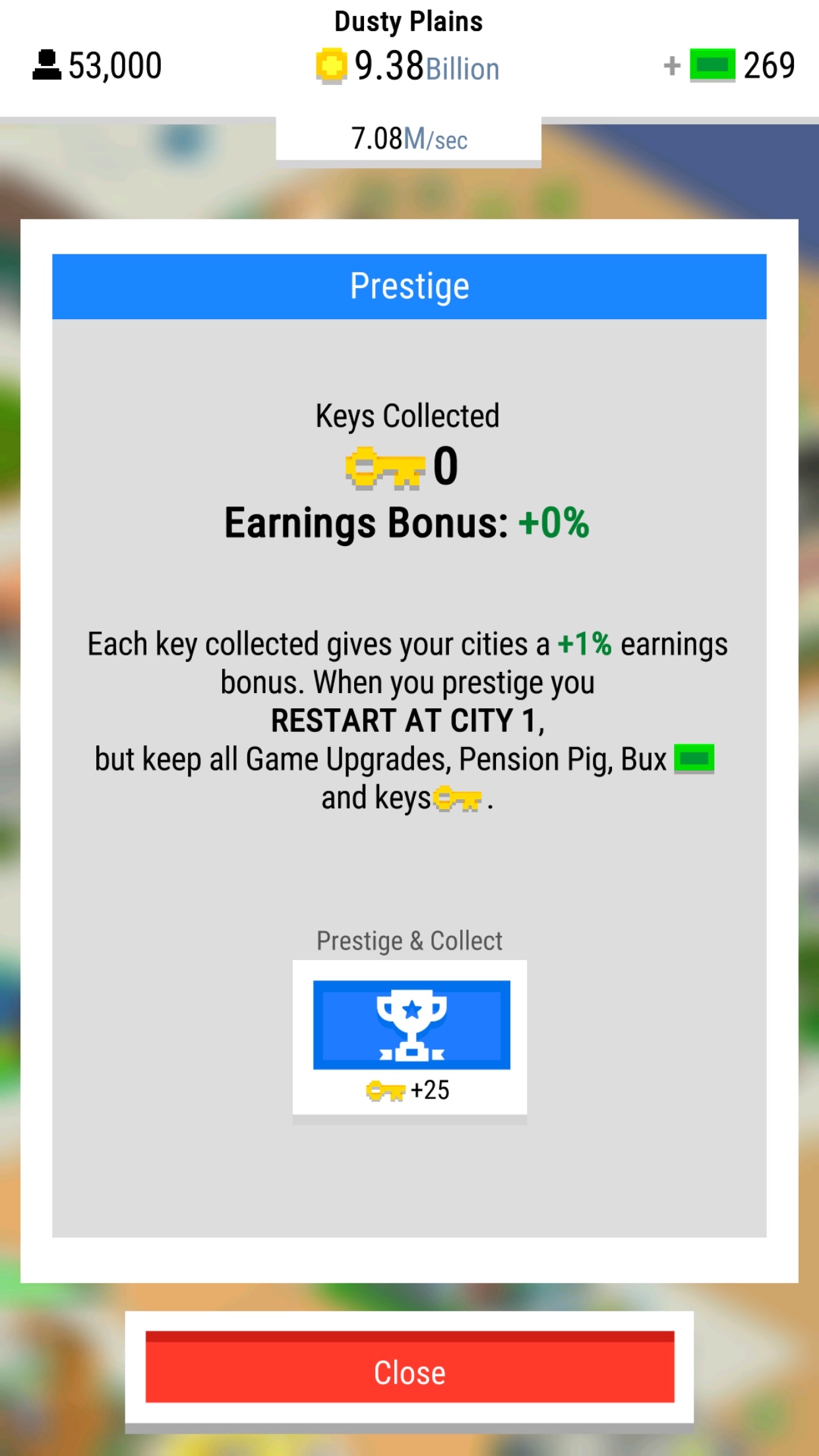 One of the things I like most about Bit City is its prestige program. As you continue to build in each city you start earning Keys, with each Key constituted a 1% increase to your baseline coin earnings. At any time, you can prestige and absorb all the earned keys, which activates your earning bonus. The catch with using the prestige is that you go back to the first City and you have to start over again (with your bonus earning and bux intact, of course).

The biggest question when it comes to prestige is whether the bonus is worth starting from the beginning. As you get further into the game, you may be understandably reluctant to start over from scratch. On the other hand, permanent coin bonuses are pretty nice as well. My recommendation is to do it a few times before you hit City 5. Come up with a bonus in your mind that you really want to strive for (like, for example a 100% coin bonus). Once you hit that through multiple prestige, then focus on advancing.

Well, hopefully the tips we mentioned will help keep you efficient in your coin generation in Bit City. Got any more tips? Be sure to mention them in the forum thread!