Geometry Wars almost spawned a  new genre of shoot ’em up when it arrived in 2003, as a Trojan horse of sorts inside of Project Gotham Racing. While developer Bizarre Creations thought it would be a throwaway extra that would be relegated to a behind-the-scenes lifespan, it became wildly popular and was eventually remade into its own release, and eventually, its own franchise. Characterized by a confined grid-like arena and its endless supply of cell-like enemies, the idea wasn’t wholly new, but the neon art style conjoined with that setup was unique at the time. Hyperlight EX ($2.99) replicates that same experience, albeit with slightly less bravado.

It’s a bit of a misnomer to consider Hyperlight EX a traditional shooter, as it’s more about movement than anything. With a digital analog stick at your disposal and a sole boost button, you’ll need to maneuver around enemies quickly as the game throws multiple formations at you. Fuel is required to boost around (denoted by blue droplet icons), and power-ups come in multiple forms, including “Entities," which are like NPC helpers that blow up enemies on-screen. Other power-ups include typical shooter conventions like bombs, lasers, and crystals. 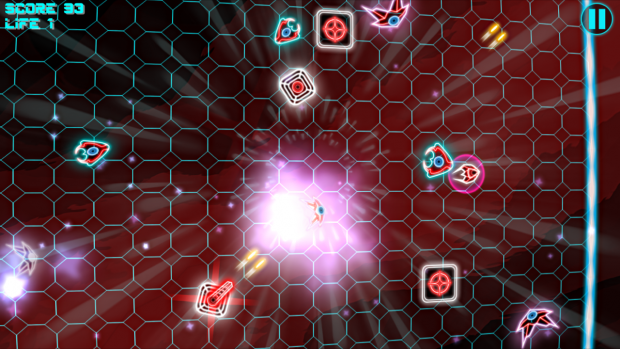 On paper, Hyperlight EX doesn’t do anything revolutionary. Most of the enemies follow the same patterns you’ve seen since Galaga, and outside of some deviations (like Temporal foes, which are numbered, and should be defeated in order, lest they explode), it’s all very familiar. But it does come together in a tight-knit way, especially when you add in the combo system and the pure level of speed it operates at. Bosses and mini-boss sections (which can get very difficult) help break up the samey feeling of a lot of the levels.

The faster-than-light (FTL) gimmick works really well. While most games ask that you avoid enemies, as long as you’re juiced up, you can collide with them and destroy them. Any firepower that you lay down is automated by way of power-up positioning, so it’s up to you to enact them at the right moment. Otherwise, FTL collision is going to be your go-to means of defense, but you need to constantly look around for fuel to make sure you don’t turn into a sitting duck a second later. Deciding when to boost and when to conserve your meter is also a crucial strategic element, as you can use it to get away or go on the offensive to prevent a precarious situation from happening in the first place. 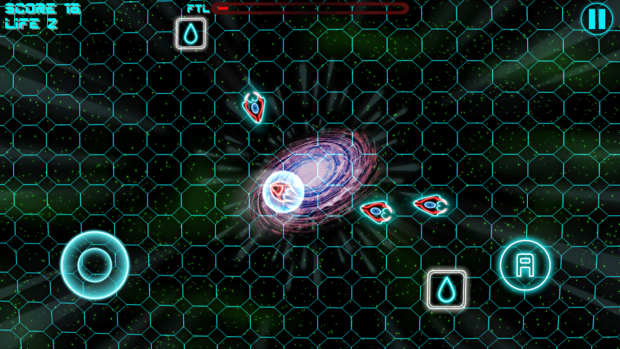 You can also rack up more points if you blow up enemies in rapid succession, triggering a combo meter that provides multipliers. If you really start to get into it you can boost your score significantly by being more aggressive, something that will help you leaderboard ratings if you ever decide to dip into the alternate modes.

Speaking of which, there’s no hidden IAPs lurking with Hyperlight EX, just a cheap $1 pricepoint that grants you everything. That includes the arcade mode, which basically functions as a stand-in for a campaign, infinity mode (endless), and panic mode, which is basically infinite with a twist. Arcade is broken up by four worlds with 14 levels each, which go by very quickly. Infinity is relatively straight-forward and didn’t hold my interest as much as panic did.

Panic changes up the formula by implementing gyro controls, but you can’t boost. You’ll need to coast along and rapidly pick up items that trigger as soon as you get them, creating a style that’s true to its namesake. I had a lot of fun constantly retrying it for a higher score, and it’s a great way to unwind after a rough evening. 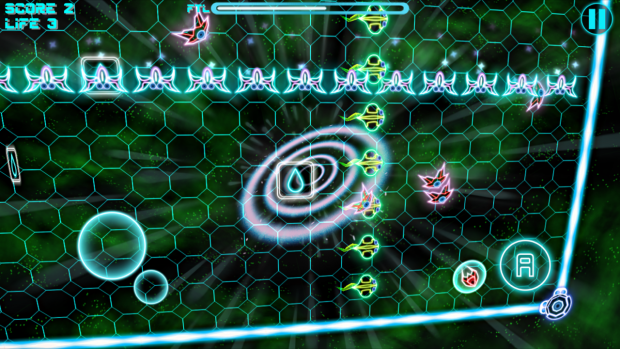 If I had one suggestion for a straight-up improvement, it would be for a full toggle for both control methods. I get that the creator wanted to make panic mode unique, but it can still be wholly defined by the tilt controls with a few more tweaks. Since you can’t directly destroy enemies with your ship, it would still be its own thing, but I found myself wanting to try out the gyro controls on the other modes.

Hyperlight EX is an arcade game that doesn’t make any sacrifices for mobile both when it comes to content and the control schemes. Definitely give this one a look if you’re in the market for another Geometry Wars-like.