At this point, I’d forgive anyone for having a genuine case of Kemco fatigue. On the one hand, they’re one of the few publishers left in mobile who frequently deliver new, traditional RPG experiences, and I really do appreciate that. On the other hand, it wasn’t hard to notice how similar their games were to one another, particularly as their number of sub-contracted developers started to dwindle. Even with me being as enamored of RPGs as I am, my enthusiasm for new releases with Kemco’s name on them has been ground down to the point that I tend to kick them off to the side for a couple of weeks after buying them. This is a publisher sorely in need of a new trick, and as luck would have it, I think they found one in Djinn Caster ($4.99).

Hooking up with Kemco for the first time is Indonesian developer Chocoarts, probably best known for Almightree: The Last Dreamer ($0.99). I’m not sure how the two companies came together, but I’m awfully glad they did. I don’t think there’s anything particularly wrong with the obvious frugality in the JRPGs pumped out by Kemco’s other developers, but I can’t express how refreshing it is to see the Kemco logo followed by something that doesn’t look like it crawled out of a decade-old feature phone engine. Djinn Caster gets off on a good foot by going with a somewhat unusual theme, whipping up a world partially inspired by the stories from Arabian Nights. It calls to mind other action RPG gems like Beyond Oasis and The Magic of Scheherazade, which is good company to be keeping. 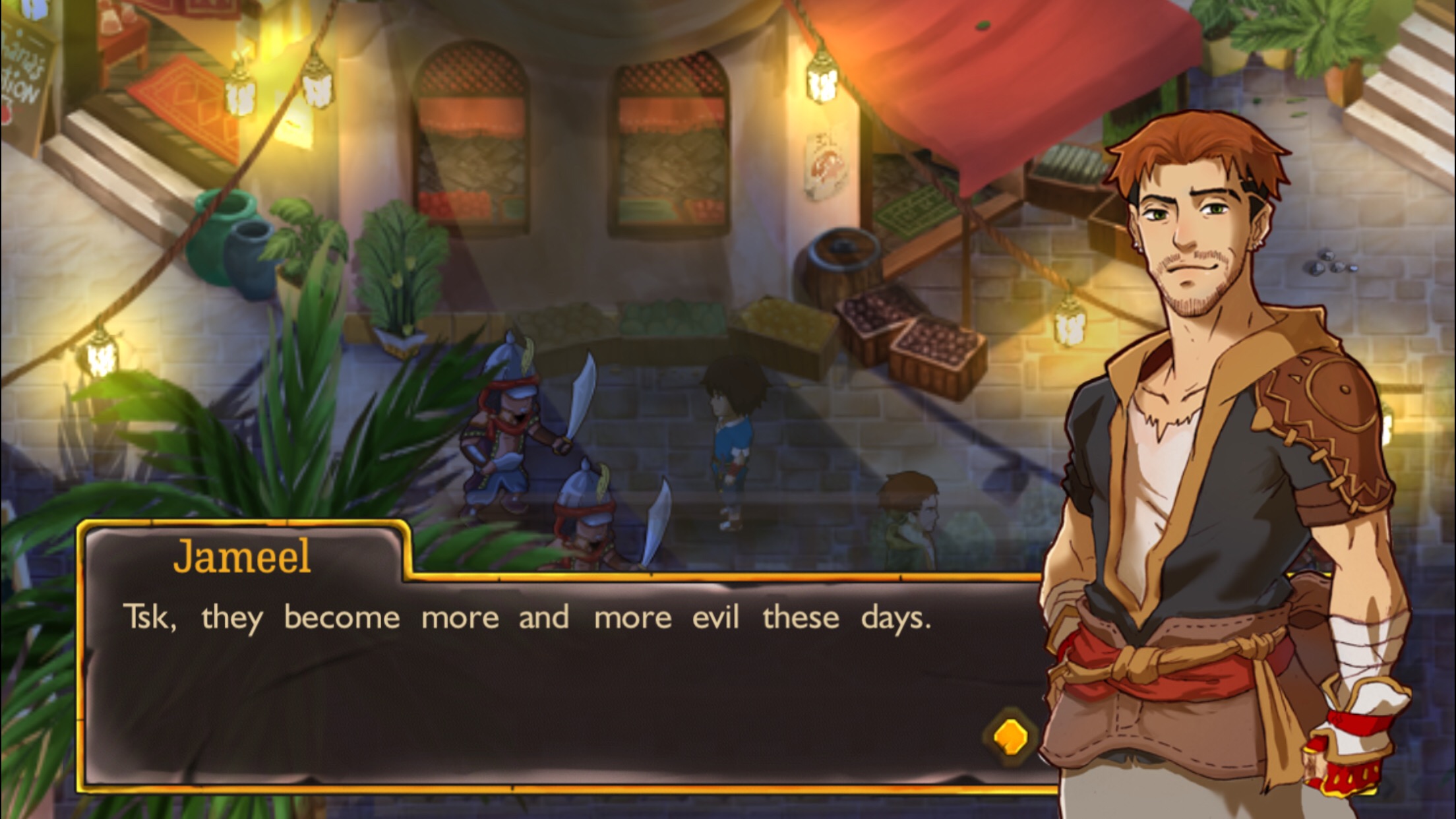 But as fun as it is to see this kind of rarely-visited setting, it’s among the least of the game’s strengths. There’s a relatively strong story here with a lot of interesting twists and solid character interactions. It starts off in a somewhat typical fashion, with a nasty Sultan, heroic rebels, and a boy who accidentally falls into the middle of it all, but it takes some satisfying turns as the story unfolds. The visuals pack quite a punch compared to the usual Kemco fare as well. Everything feels individually crafted, with plenty of animation frames for even minor characters and a tremendous amount of detail. You can see these qualities best in the game’s towns, which feel alive in a way few mobile RPGs take the effort to implement. The game’s dungeon areas aren’t quite as flashy, but they too have a lot of little details that keep them from feeling like they were built in a construction set from tiles.

The story set-up has you controlling a young man whose default name is Elmir. One night while he and his friend are living it up in the next town, they get into some trouble with the Sultan’s guards. As they make their escape, Elmir bumps into a mortally-wounded old man who gives Elmir an ornate dagger along with some prophetic words. Elmir makes it home, but the next day brings a number of surprises. First, the Sultan’s guards are very interested in finding both him and the dagger, and second, that dagger can summon an honest-to-goodness djinni named Ziv. Young, brash, and brimming with pride, Elmir decides to use this new-found power to help people out and make a name for himself. Before long, he’s up to his elbows in both djinn and trouble. 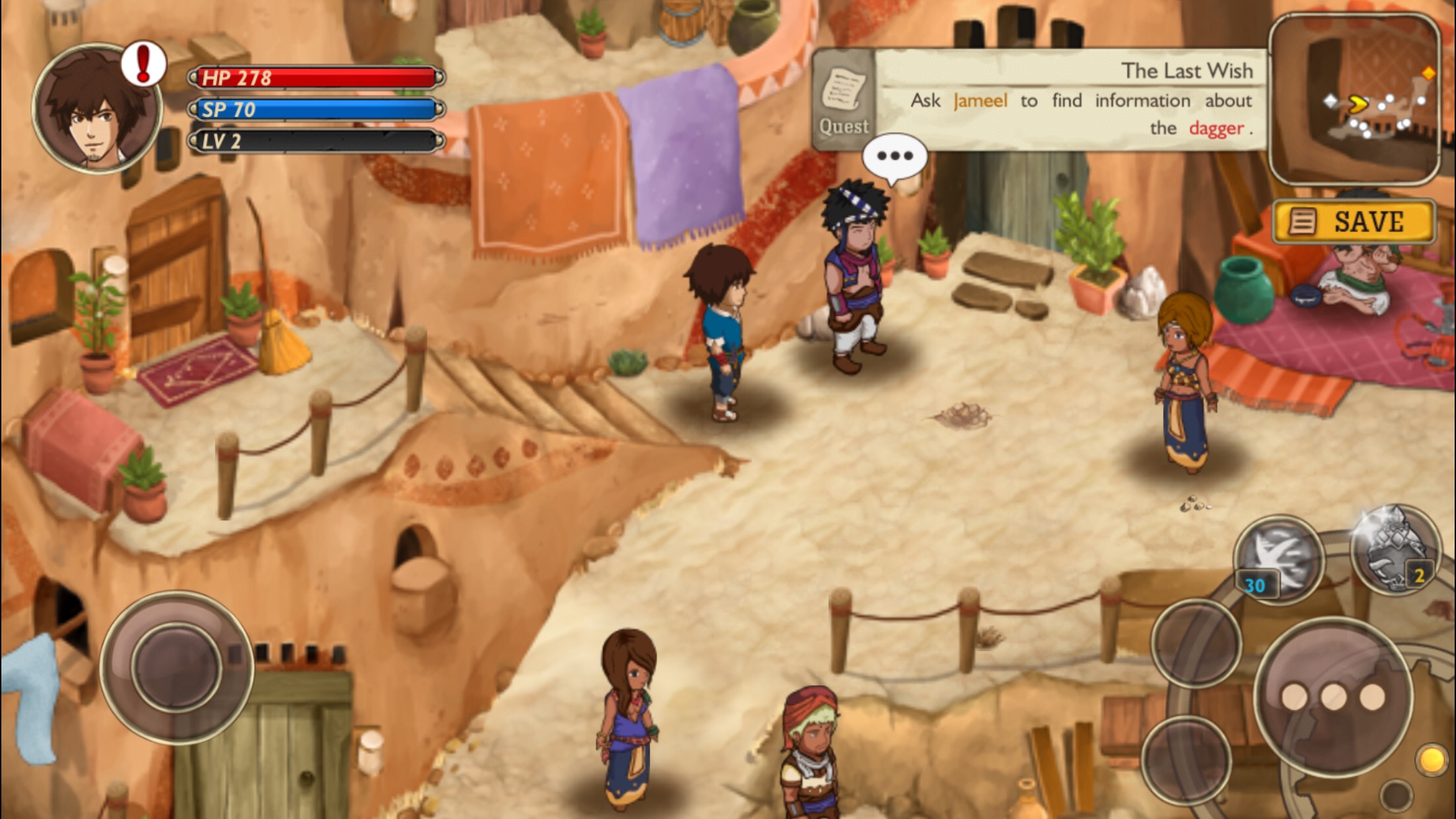 The basic structure of Djinn Caster has you working from town hubs where you can pick up quests, buy and sell items, and advance the story. Quests will sometimes send you around the town itself, occasionally breaking away to a battle if it’s called for. You’ll also frequently be sent out to dungeon areas to solve problems. And by solve problems, I mean you have to kill just about everything that moves, of course. There’s no traditional overworld to travel across, so leaving town will simply call up a map with whatever locations are currently open to you. Just tap on where you want to go, and your character will start trudging towards the location. Roaming parties of guards might ambush you along the way, necessitating a battle. Once you reach your destination, you’ll begin the dungeon. Depending on how you fare, you’ll be graded and rewarded appropriately. You can repeat dungeons even if you don’t have any further quests there, whether it be to grind up some extra experience and loot or because you want to earn a higher grade.

Djinn Caster isn’t big on puzzles, instead focusing heavily on action combat, similar to games like Inotia or Zenonia. I should stress, similar to those franchises before they went down the road of becoming poorly-balanced free-to-play treadmills. Given the genre, I expected a lot of grinding going into this game, but its experience curve works out more similarly to classics like Secret of Mana or Ys. As long as you’re doing all of the side-quests the game hands out, you’ll rarely be outclassed in any insurmountable way. Some of those side-quests might involve repeating battles to scour up the necessary amount of items, which some might find a little on the repetitive side, but it’s never for nothing. Of course, you can do additional grinding if you want, and it’ll make things easier, but it’s a fairly well-balanced game by default. You’ll need to develop your motor skills a little and making the best possible use of the resources given to you is a must, though. 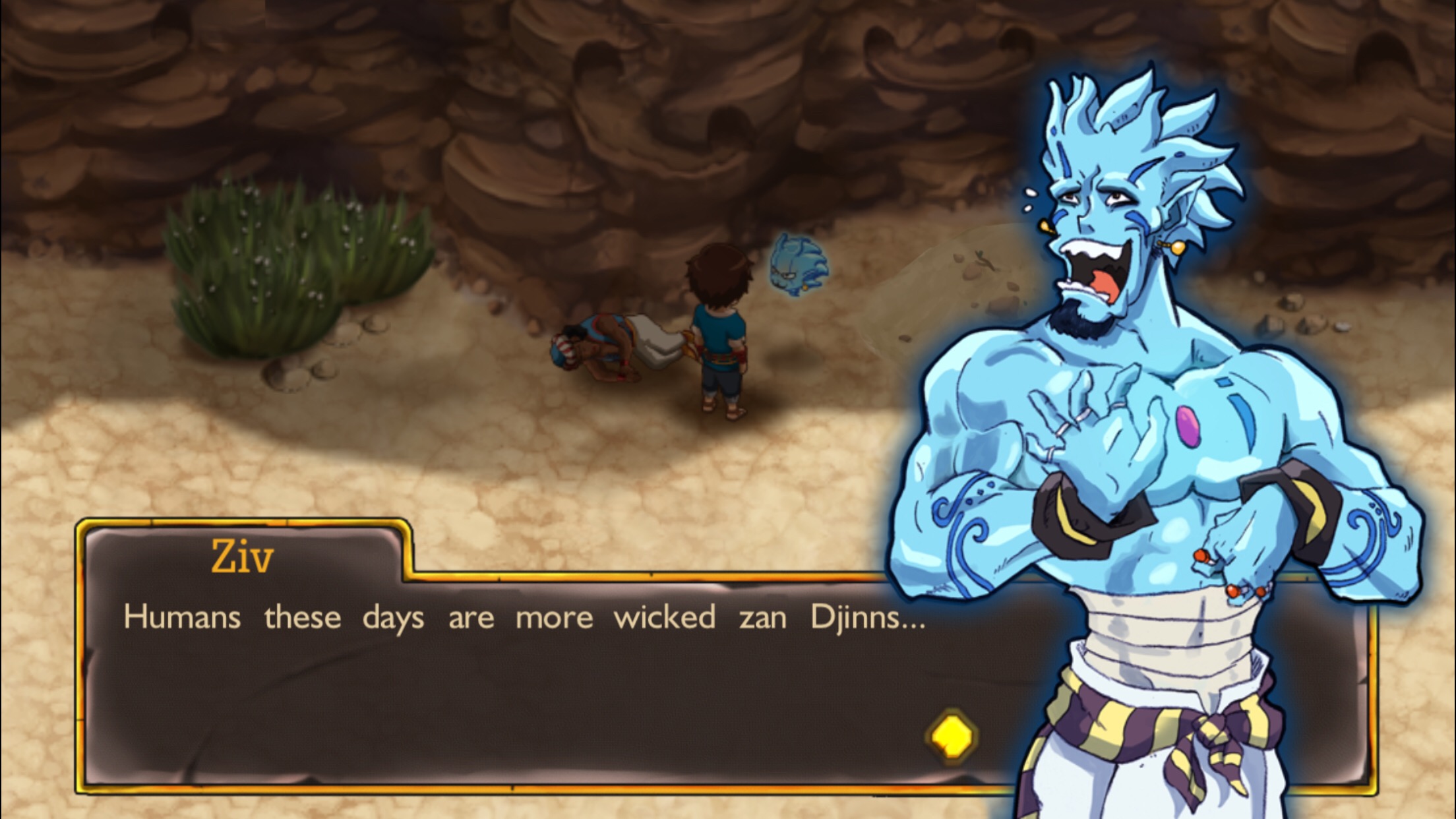 In addition to your basic attack combo, you’ll also be able to learn new active and passive abilities by spending points on a skill tree each time you level up. There are lots of viable builds, so your battles can be as straightforward or fancy as you like. Then there are the djinn. You’ll find them as you go through the game, and each one brings their own brand of support to your character. Djinn work sort of like super moves, and they’re powered by energy left behind by defeated enemies. You suck in this energy in a manner similar to the Xbox Ninja Gaiden, holding down the attack button to absorb any nearby bits of power. Whichever djinni you have active will also earn experience points alongside of Elmir, making them more powerful in your choice of category. All told, Djinn Caster offers quite a few options without making things too complicated. I also really appreciate the level of skill and strategy some of the boss encounters require. It’s during these fights that the game most resembles a vintage action-RPG rather than the slice-and-dice examples that the genre has come to be associated with on mobile.

If you’re looking for a good loot game, though, I regret to say that Djinn Caster is once again more similar to those classic console ARPGs. There are lots of gear upgrades you can find or buy, but you’ll certainly be doing more of the latter than the former. Most of what enemies drop will be raw resources like money, recovery items, vendor trash, or special rubies.  Those rubies work as the premium currency in this game, and if you buy the paid version of the game (the only one available at the time of this writing), you’ll get a whole bunch of them the first time you start the game. As usual for a Kemco game, you can exchange this currency for a selection of cheat items like a ring that boosts experience gains or a bag that expands your inventory. They can also be used to continue if you fall in battle, a use that had me initially a little concerned. Fortunately, I didn’t need to make use of that function even once in the nearly 20 hours it took me to finish the game.

I ended up having more fun with Djinn Caster than I expected to ever have with a game published by Kemco in its current form. I don’t know if it’s going to be to everyone’s tastes, but if you’ve ever found yourself pining for the days where you could get a good, solid Eastern-style ARPG without getting a free-to-play shakedown, you’ll probably want to give this one a look. The story and cast are memorable, the gameplay is enjoyable, and I really like the style of its presentation. It feels completely unlike anything else in this publisher’s line-up, and if you ask me, it’s about time.