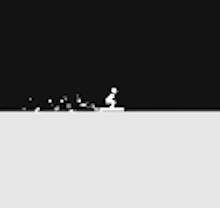 Jeff Weber, aka Farseer Games, released a really cool skiing game called Krashlander ($1.99) right about this time way back in 2013. Krashlander featured a really nice physics engine and control mechanics that were tough to wrap your head around at first but extremely satisfying once your skills in the game improved. All this was wrapped up in a striking silhouetted style. As mentioned, it’s been a pretty long time since Krashlander released, but Weber has skiing on the brain once again. As explained on his blog, Weber hit a point during the development of another game he’s been working on called Diver where he wasn’t sure what direction things should be going. He eventually figured it out, but during that lull the idea for a new minimalist skiing game called Just Ski came to the forefront.

Part of what inspired Just Ski was Weber’s fondness for another minimalist sports game, the modern classic Desert Golfing ($1.99). As Weber explains, “Part of the idea for Just Ski came when I first fired up Desert Golfing on iOS. When you start up Desert Golfing, there is no splash screen, no menu, no buttons…. just THE GAME! It was awesome and refreshing. What I’ve attempted to do with “Just Ski“, is invoke that same feeling but with skiing instead of golfing." Here’s an animated gif of what Just Ski is looking like so far.

In many ways, this is simply a mashup of the physics-based skiing in Krashlander and the minimalist, to-the-point presentation of Desert Golfing. There’s also an interesting story behind the visual inspiration for Just Ski, which was actually a promotional video for Microsoft’s fitness wearable called the Band. Yes, very strange! But you can check out the Band promo video yourself to see where that minimalist visual style came from. The game is already complete, and there’s just a few things Weber wants to do to get ready for the release of Just Ski, so expect this one in the not too distant future.