While Game Oven Studios, the collection of maniacs behind Fingle ($1.99), Bam Fu ($0.99), Bounden ($2.99), and Jelly Reef ($0.99), is no more, developer Adriaan de Jongh is still out there making games. And he’s back with another fantastic and unique experience that you have to try. Hidden Folks ($4.99) is a collaboration between him and illustrator Sylvain Tegroeg that takes a very simple concept of being a “Where’s Waldo" game. Then it makes everything happen in a monochromatic world, with huge canvases to explore as folks wander around, and you have to find a certain bunch of these folks. It’s a simple idea, but the work that the team behind the game has done with the art, sound, and playability, makes this a fantastic experience. 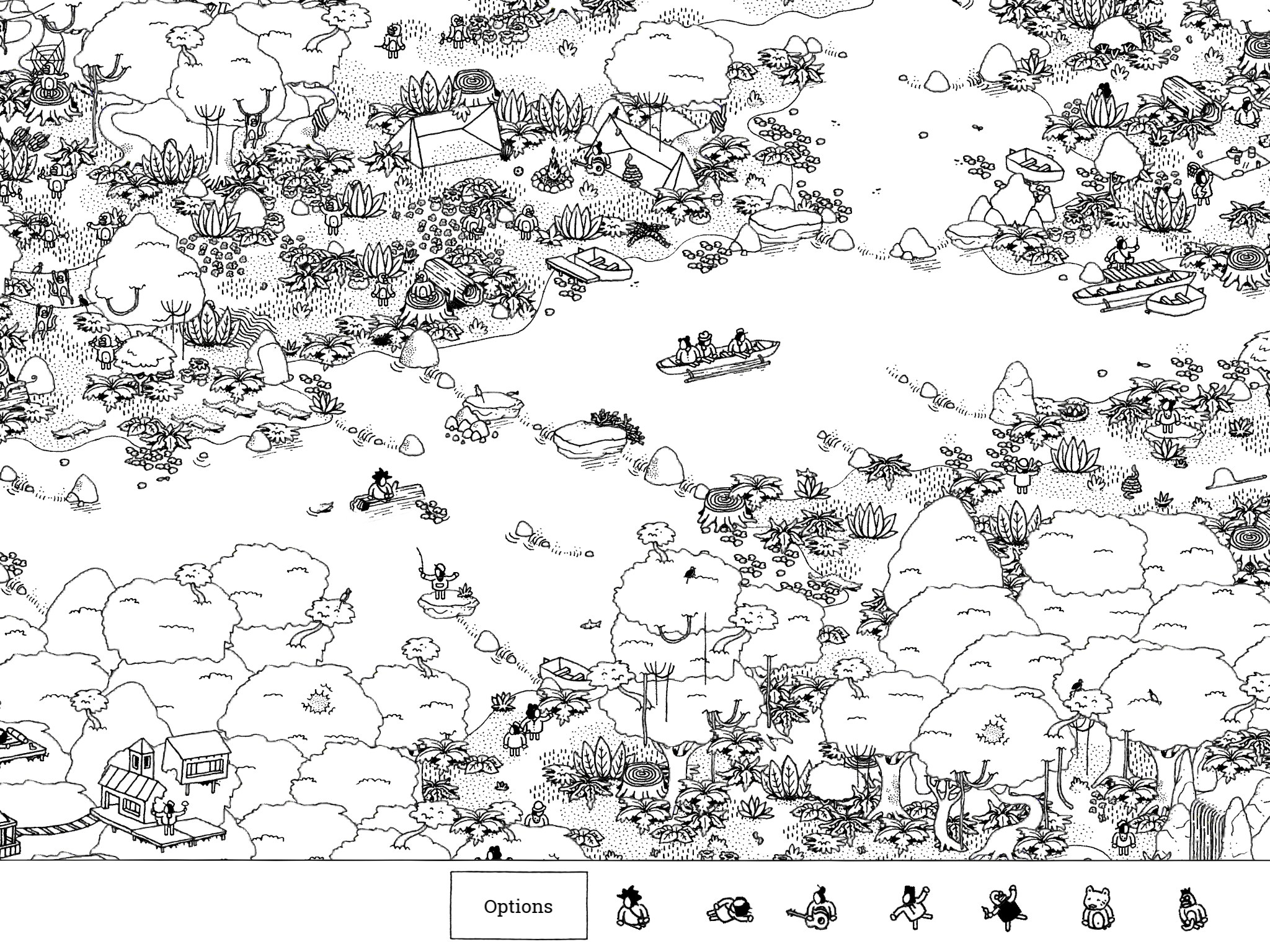 Hidden Folks is pretty much just a “Where’s Waldo"/"Where’s Wally" game. Your goal is to find a bunch of the eponymous hidden folks listed, or occasionally certain items. The big trick for Hidden Folks is that everything is interactive and occasional moving. Poem items will be hidden behind obstructions, or hidden in manholes. Others, you have to open up tent flaps or doors to find folks hiding from your view. Oh, and the levels become incredibly dense, too: you have to find folks scattered throughout groups of hundreds of other folks that look quite similar from your bird’s eye view, especially because the game is monochrome. Oh, and there are some elements where folks will only be on screen at certain points, or you have to make not-entirely-obvious interactions in order to make the folks appear.

Don’t think that Hidden Folks is necessarily impossible, though. You get a bit of help from the character descriptions, which serve as hints for where these folks are. They also provide a bit of character and backstory to the world beyond “find these characters." The folks are animated, and if the animation of a folk is off, well, maybe there’s something you have to do to get them moving the way you should. There’s a lot to interact with in Hidden Folks, and you kinda just have to experiment and tap around to see what’s what and where. That’s kind of nice, too: tap on someone that looks a bit prominent, and maybe they’re one of the folks you have to find to complete the level! Hooray for interactive games! Bigger levels can take a while to sort out, but at least you don’t have to find everyone to go to the next level if you get stuck with a folk that you just can’t find. 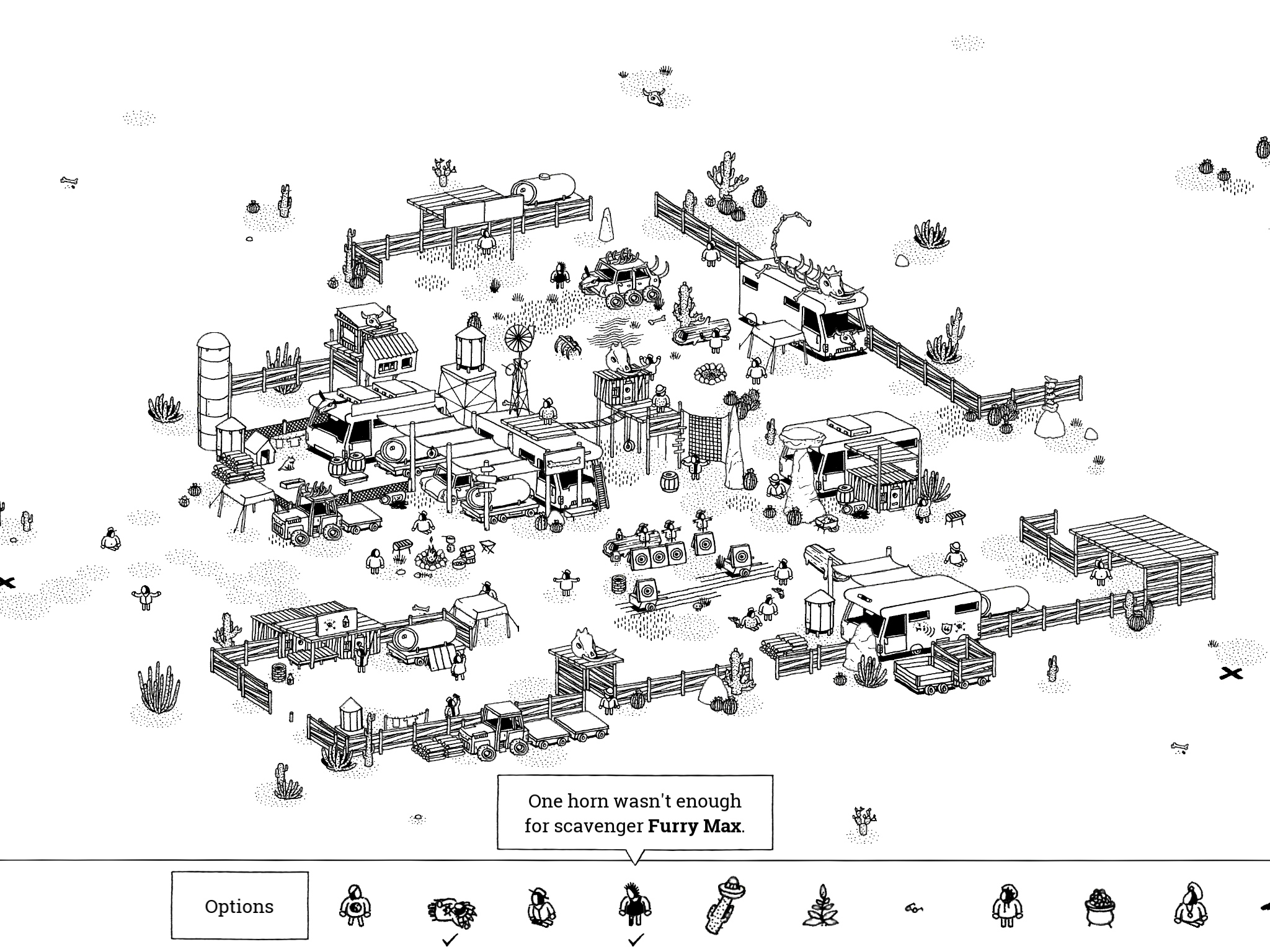 A significant part of what makes Hidden Folks so great is its sound design. Pretty much everything that can be tapped or interacted with has a sound effect. And all the sound effects are made from the mouth of Martin Kvale, and there’s over 960 of them. All sorts of sounds, from his mouth making vehicle noises, to robotic bleeps and bloops, to weird animal grunts are here. Hidden Folks is a clever idea by itself, but with all the sound effects, it gets taken to a brand new level. It’s just so, so, charming. You have to wear headphones or turn the volume up when you play the game, because the sound adds so much atmosphere to the game.

And that’s what makes Hidden Folks such an essential experience. It’s not just a hidden objects game, it’s a glimpse into this little world that de Jongh, Tegroeg, et al have made for you. Everything feels alive, and it’s a world that you want to play around in and explore. You have a clear objective, but just tapping around on items, seeing new animations, and hearing the wacky sound effects (how many car sounds did Kvale have to make?) is just so much fun. This is one of the most charming games I have ever played, and it’s so much to dive in for a few minutes or hours at a time. Also, because the world is so much fun to just play around with and to discover things outside of the objectives, it keeps the game from ever feeling frustrating when you can’t find one. And there’s fun aspect of discovery when you see where some of these folks are hiding. 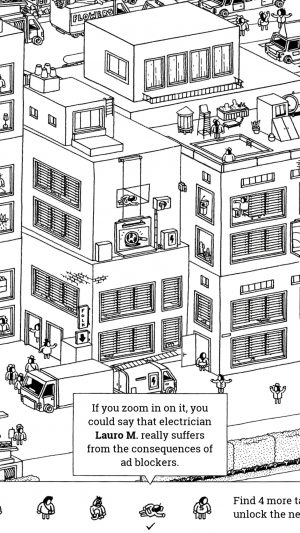 The dev team behind Hidden Folks has done a great job at adapting the game to all the major iOS form factors, and even tvOS. iPad is probably the best way to play, since the Retina Display really shows off the detail of the game in the best way while also giving you a good macro view of the landscapes. But on iPhone, the game is played in portrait mode, and is a perfectly acceptable way to enjoy Hidden Folks! You lose some of the scope of the game that you get on higher-resolution displays, but it’s still great.

If you have an Apple TV, this is available on there too, as a universal app. You will need to use the actual remote, and not just the Remote app , as double-tapping the touchpad on the Siri Remote is used to zoom in and out. I think it’s not as intuitive as touchscreen play is, but it’s still quite playable. I can see this being great for families: get a parent on the remote, and have kids point at the TV for what they think are the characters, perhaps. Oh, and this all syncs up via iCloud, so you can jump from version to version without any issue whatsoever and keep your progress on individual levels and overall. The color schemes are a nice option: you can play with white and black inverted, or in a warmer shade of white if you prefer.

Play Hidden Folks. It’s just so charming and fun to tap around in this world that feels alive. It’s such a simple idea at its core of being a hidden object game, yes. But the artwork, sound design, and the realization of the ambition to create puzzles where you have to find specific folks in the middle of busy, bustling scenes, are all at their peak. Check this game out.