Have you ever had a great idea for a game, and could see no reason why it wouldn’t work? Ask anyone who has to turn ideas into reality, it doesn’t always work out that way. Ideas that work on paper aren’t as viable in real-life. Songs that sound good when you hum them don’t have the same feeling when you play them on an instrument. Even for a writer, I’ve had ideas for articles that didn’t work out because the ideas I had in my head didn’t quite work out on paper. Now, sometimes these ideas still get pursued to completion. I’m not going to put words in Cobra Mobile’s mouth as to Red’s Kingdom ($2.99), but it certainly feels like an idea that someone had that was really cool, and I liked it too! Combine sliding puzzles with a Zelda-style adventure with upgrades to collect? Sounds like it has potential! But at least for myself, and in this particular format, it does not work. 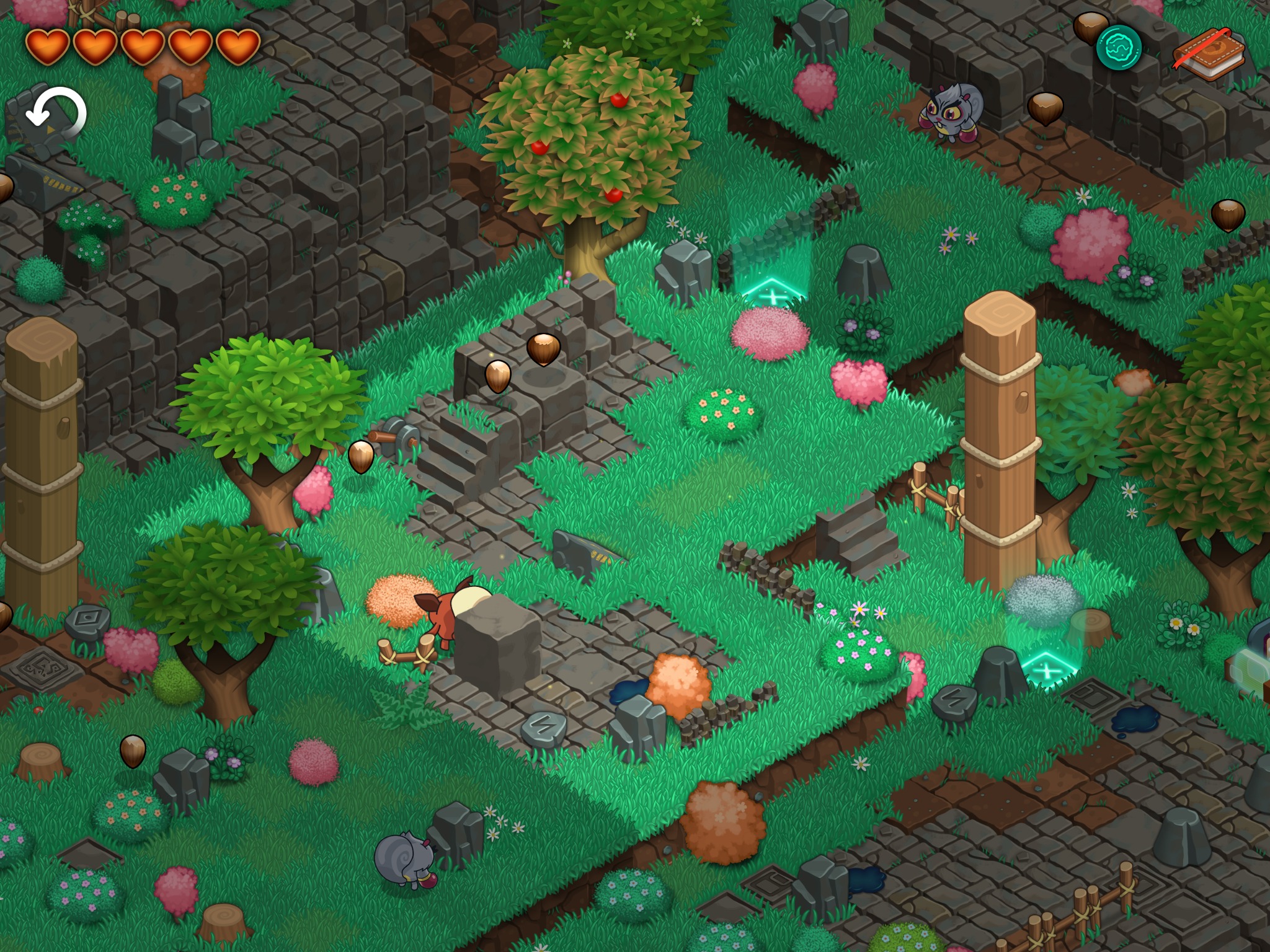 Red’s Kingdom is a sliding puzzle game, where you swipe to move protagonist Red in a diagonal direction to roll that way until a wall or object is hit. There are familiar puzzles, where you have to hit switches and roll using objects and tricks to get to where you need to go. The trick is that this all takes place in one giant interconnected world. Much like a Zelda or Metroidvania game, there are certain parts of the world that are inaccessible until you collect certain objects. You also get upgrades that help out with the enemies that you’ll face in Red’s Kingdom. It’s all a genius concept on paper: sliding puzzles are fun to play with, and you combine them with the satisfaction of exploring a world and getting upgrades. Seems like a winning combo, but the problem in large part is that sliding puzzles work really well in a particular context of being self-contained, where in a larger world, Red’s Kingdom fails to address adequately.

Red’s Kingdom doesn’t work as a game that you can come back to after a while. See, many of these puzzles require very particular solutions for how you have to move around, especially to avoid getting stuck. You can reset a room, but can’t undo a specific move if you get stuck. I like sliding-style puzzles, but a lot of the satisfaction is in figuring out the particular solution once and for all, possibly returning to get a more optimal one. In the context of Red’s Kingdom, these puzzles are less fun to play when you’re forced to backtrack, as you’re exploring a world, not just solving puzzles. Some collectables are part of the puzzle, so you don’t have to go through all the intricacies of a room repeatedly, but you’ll have to figure out how various switches work again. So, picking up the game, especially if you quit while backtracking, can be annoying, as you can’t just get your bearings and find your way to the next objective, you have to solve puzzles over again. 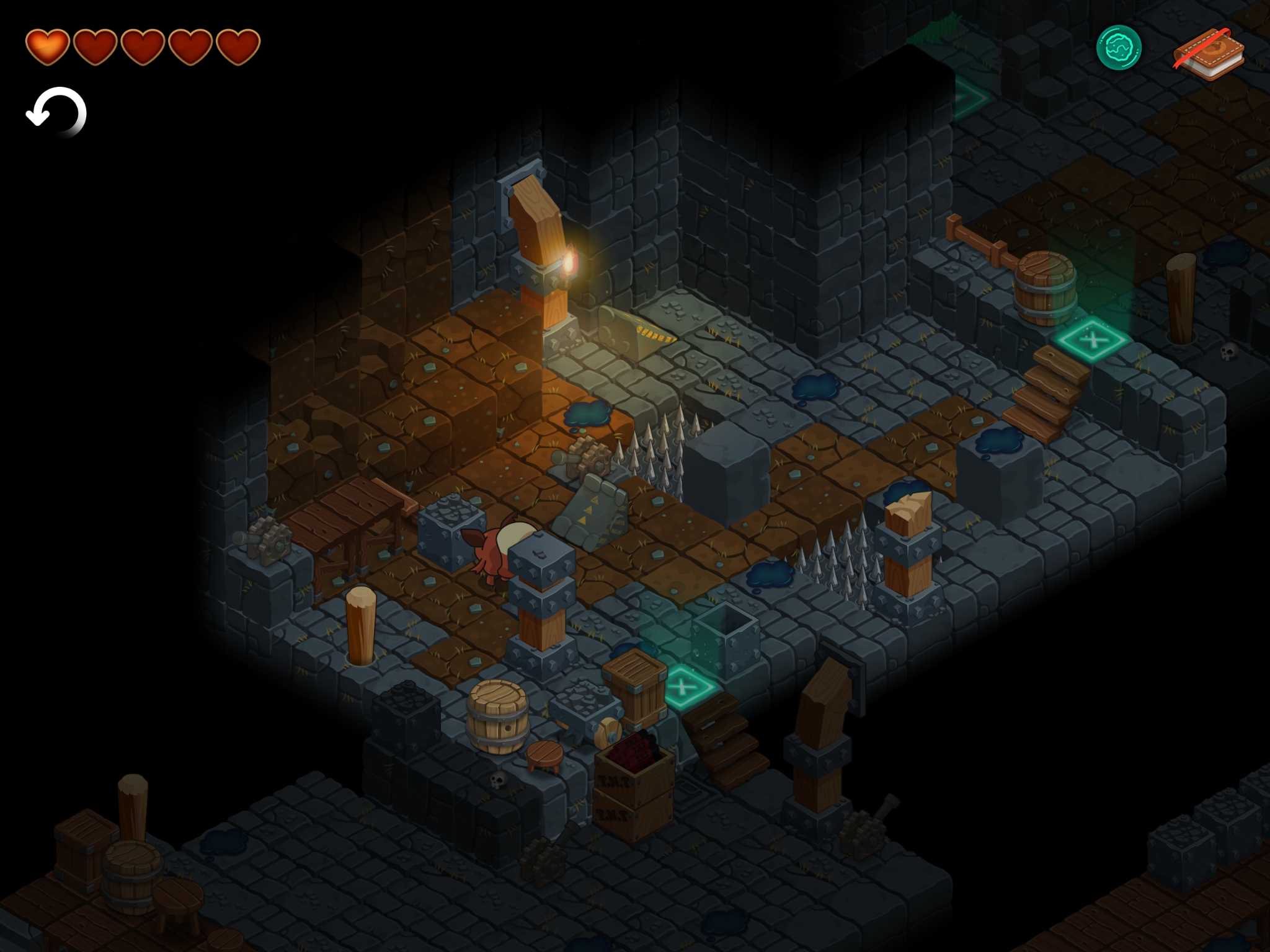 One possible solution would be for an easy way to move between rooms that you’ve already beaten. Right now, having to re-solve rooms in order to navigate the world gets to be quite annoying. I solved these puzzles once, why do I have to go through and do them again? It’s a bit aggravating, in particular when you pick the game back up after a while and just want to get to something new. Sure, this is something you have to deal with in pretty much any open-world game, but at least there, the act of retracing your steps is just mere tedium, and there are warps in Red’s Kingdom. But you have to instead work your way back through rooms you’ve solved already to get to those warps. Heck, even if warps were accessible from anywhere by the player, that would go a long way toward helping out with the annoyance factor.

Now, this might all be less of an issue if you’re the type of person that plays games in one sitting. This is a good enough game to sit down with on an iPad on a couch on a Saturday afternoon. Just keep at it, and you’ll likely have a good enough time. Granted, you can play this on Mac and PC if you prefer, and this game might be better there. But we’re talking about mobile gaming, a platform where stop and start play is a huge part of its raison d’être. I have significant issues with how Red’s Kingdom is structured, and it puts a severe damper on whatever enjoyment I can wring from the game. 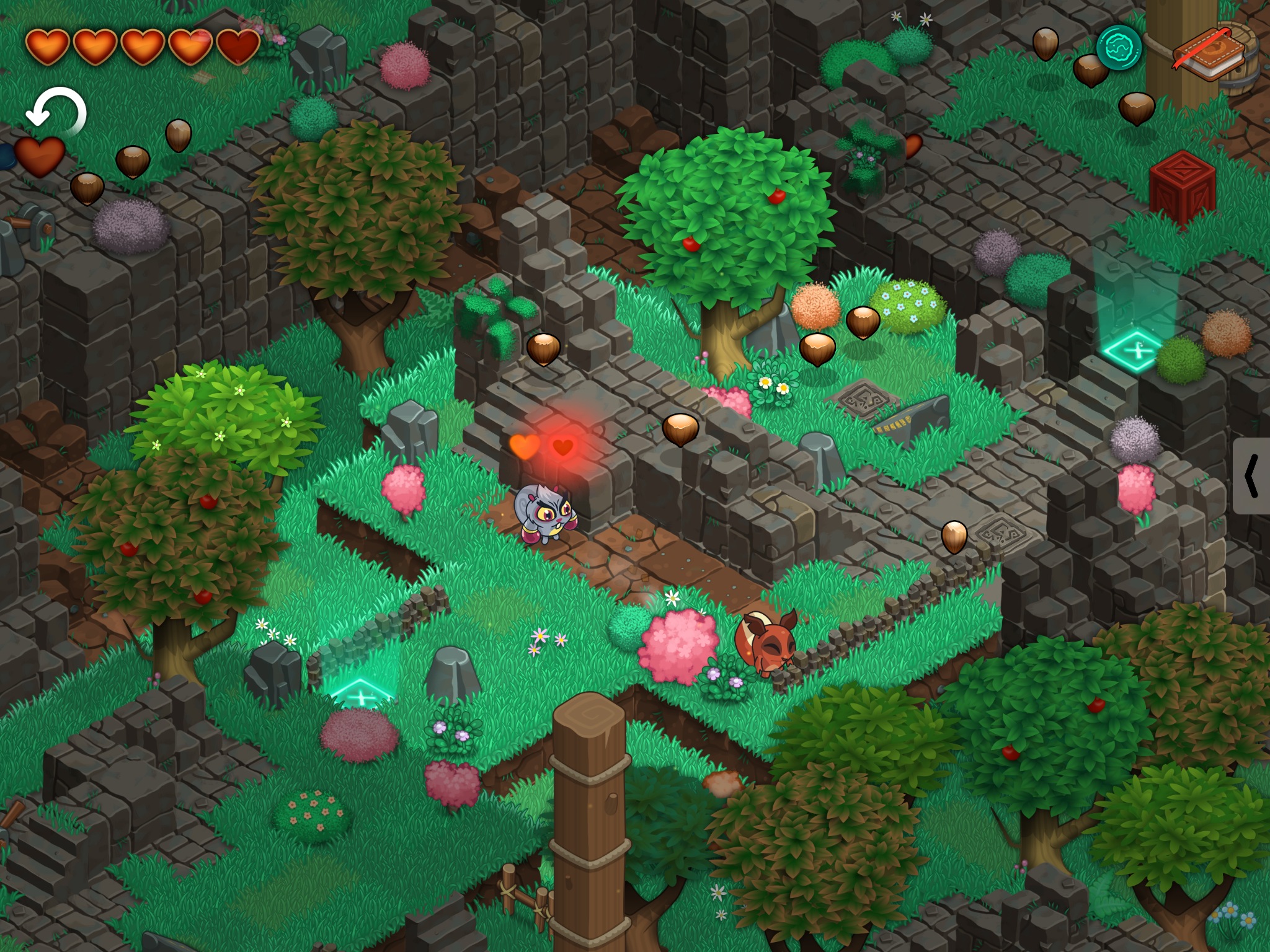 The 2D and isometric perspective of Red’s Kingdom has some issues. The isometric perspective looks great, but it can make it tough to line up the proper line you’re going in, as you have to correct for the angle. The rooms are somewhat large, so it can be tough to tell the line you’re on, even on an iPad. There are some helpful lines especially with indoor rooms, but there’s another issue that arises. You can have certain spots obscured by scenery or objects, and because the game is 2D from a fixed perspective, you have no way to see around these spots. The music in Red’s Kingdom is fine at first, but it winds up being extremely repetitive. I wound up muting it and listening to my own music instead, because the primary track that plays grows too grating.

Red’s sliding is a bit on the slow side, which wouldn’t be a problem if it wasn’t for some timed puzzles where you have to make lightning-quick maneuvers to get Red to a spot triggered by a switch. If Red would get with the program and roll a lot faster, it wouldn’t be a problem. But it felt like on a few occasions I had to execute some lightning-fast maneuvers just to hit a narrow timing window. It’s not exactly fun to do that, especially when these might pop up in parts during transit through the world to find items.

It’s all a shame because I really want to like Red’s Kingdom. I still like the concept, as sliding puzzle games are just collections of single-level vignettes, and this game transcends that. When you dig into it, and get going with the flow of the game, there’s the spark of something brilliant and fun. And Red’s Kingdom is gorgeous to look at it. But the flaws are deep, that it’s tough to recommend despite its great looks and creative ideas.