Despite its mysterious dystopian backdrop, Collect or Die ($1.99) ironically made me reminisce of the ‘golden days’ of the App Store. Specifically, a time when the perceived novelty of the iPhone’s gyroscopic controls means an abundance of tilt controlled titled, when rag-dolls and stickmen were being constantly flung to their inevitable bloody demise, and also one where an emphasis on genuinely fun gameplay trumped the need for timers and draconian monetisation mechanics. Collect or Die even has a Lite version- it truly doesn’t get more retro than that. On the other hand, a lot has changed since 2008 – Collect or Die is a game that, in testament to its title, lives and dies as a result of its reverence to older iOS experiences, and while some may be turned off by its tilt-only rock-hard emphasis on platforming, Collect or Die features enough variety and irreverent humor to make it a highly enjoyable experience, even in 2017. 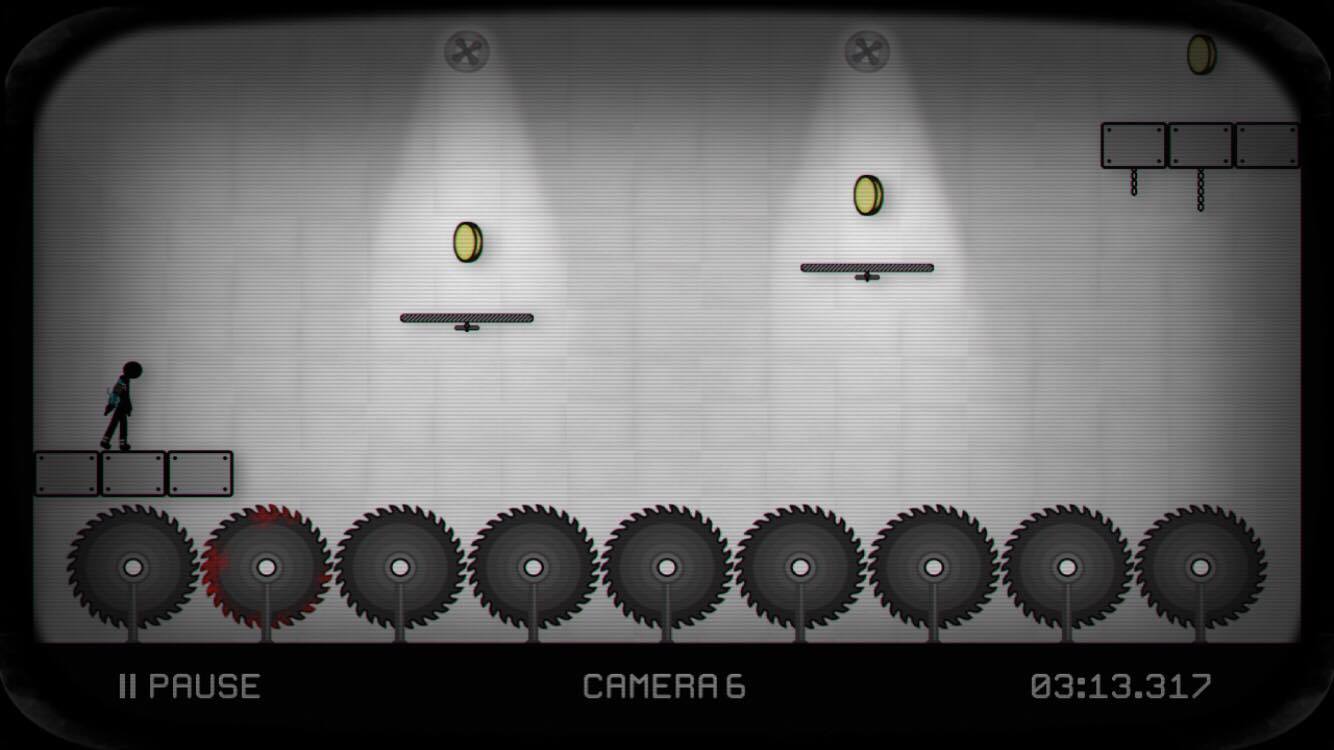 From the outset, developers Super Smith Bros haven’t been particularly honest with the game’s title – regardless of how many coins you collect, you will almost certainly die a lot in Collect or Die. With saws, lasers, thwomps and spikes at every turn, your stickman will inevitably meet a horrible and bloody fate numerous times within each level. If only Tilt to Live ($2.99) hadn’t already been taken. Naming qualms aside, despite the deceased counter going into the hundreds by the time the full game has been cleared, Super Smith Bros have managed to create an extremely compelling experience that will make you push through the deaths and continue to the end of the game. You star as an anonymous stickman, who is tasked with collecting all of the coins within a suspiciously monitored facility to progress through all forty levels that are included in the base game. These coins may be floating precariously close to the aforementioned spiked obstacles, or at the end of a particularly nasty gauntlet where lasers and other lethal traps lay waiting. Mechanically, it’s similar to the cult PC platformer N+, but on a smaller scale and with less of an emphasis on parkour.

The level design is a particular highlight of Collect or Die, and manages to use the different obstacle mechanics that are included in each level to their fullest. With some levels focused on methodical, slow, and timing based jumps to progress, others that require quick and hectic reactions to avoid the rising spikes below you (in a similar vein to some of the castle courses in Super Mario World), and even a few that simply require a good grasp of the tilt controls, there is a significant variance in design across all forty levels that means each one feels distinct and interesting. Furthermore, each level’s relatively brief lifespan helps avoid a lot of the frustration with similar rage-inducing platformers, and means no one challenge outstays its welcome. With a new mechanic introduced at the start of each of the four sets of ten levels, Collect or Die also nails its pacing, and ensures that despite its determination to be a challenging platformer, the difficulty curve is fair and easy to accustom yourself to. 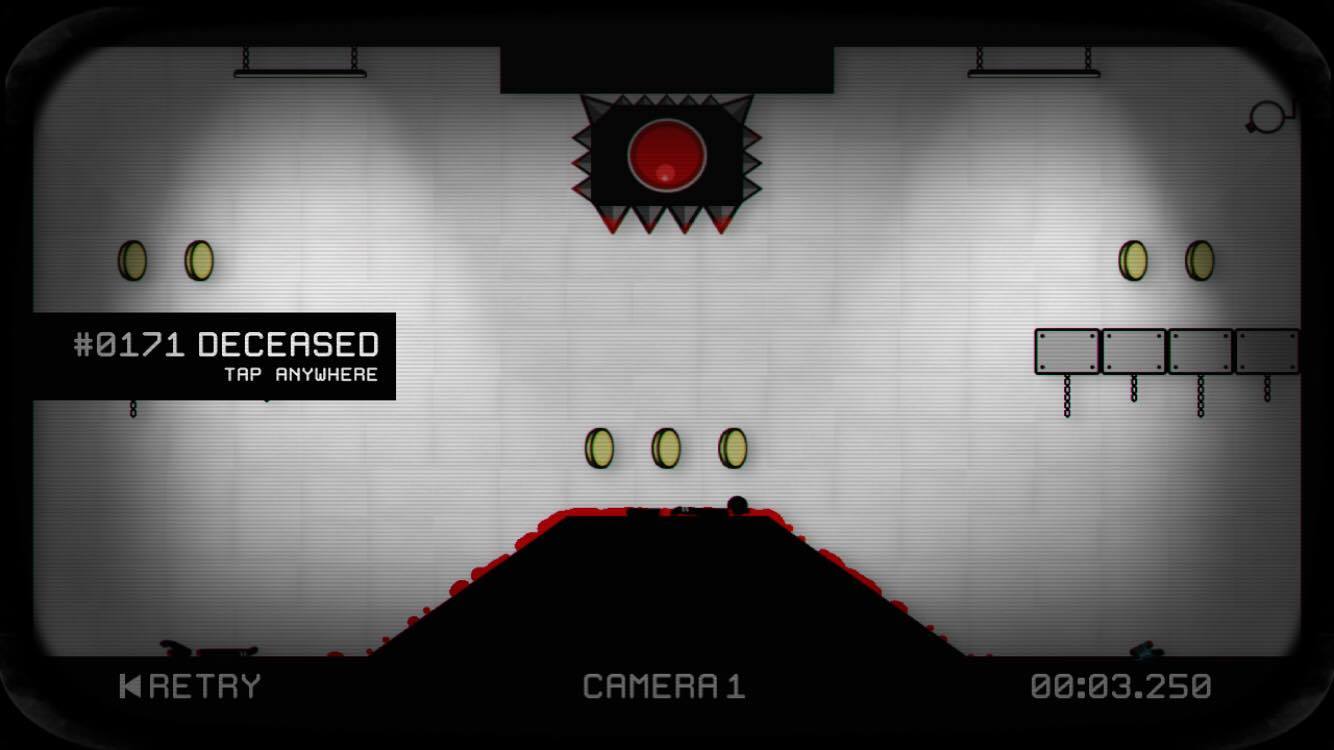 The big difference between Collect or Die and its contemporaries, and the biggest source of potential controversy for the game, is the fact it is entirely controlled by the iPhone’s gyroscope (tapping to jump aside). From the outset, this makes Collect or Die difficult to play if you’re in a car, on a train, or on some other equivalent moving vehicle, and naturally results in less precision that you would otherwise have with touch screen inputs. However, Collect or Die’s emphasis on tilt controls is actually one of its strongest assets, and made the game feel fresh to play within a genre that has been – if you’ll pardon the pun – done to death. Super Smith Bros have built every level specifically for the tilt controls, which means that platforms and ledges do not have to be landed on perfectly – while there is an obvious extra degree of difficulty through the purely gyroscopic movement, this actually adds to a lot of the enjoyment of the game, and with touch controls it would be far too easy. Regardless of this, the tilt controls do actually work really well, and with customisable sensitivity and the ability to calibrate them through the pause menu, I felt in control through the vast majority of the game. Perhaps adding some sort of button – such as tapping the left side of the screen – to anchor the protagonist may help with some of the more fiddly sections, but overall I really hope Super Smith Bros stick to their guns and keep tilt controls as the only option within the game. 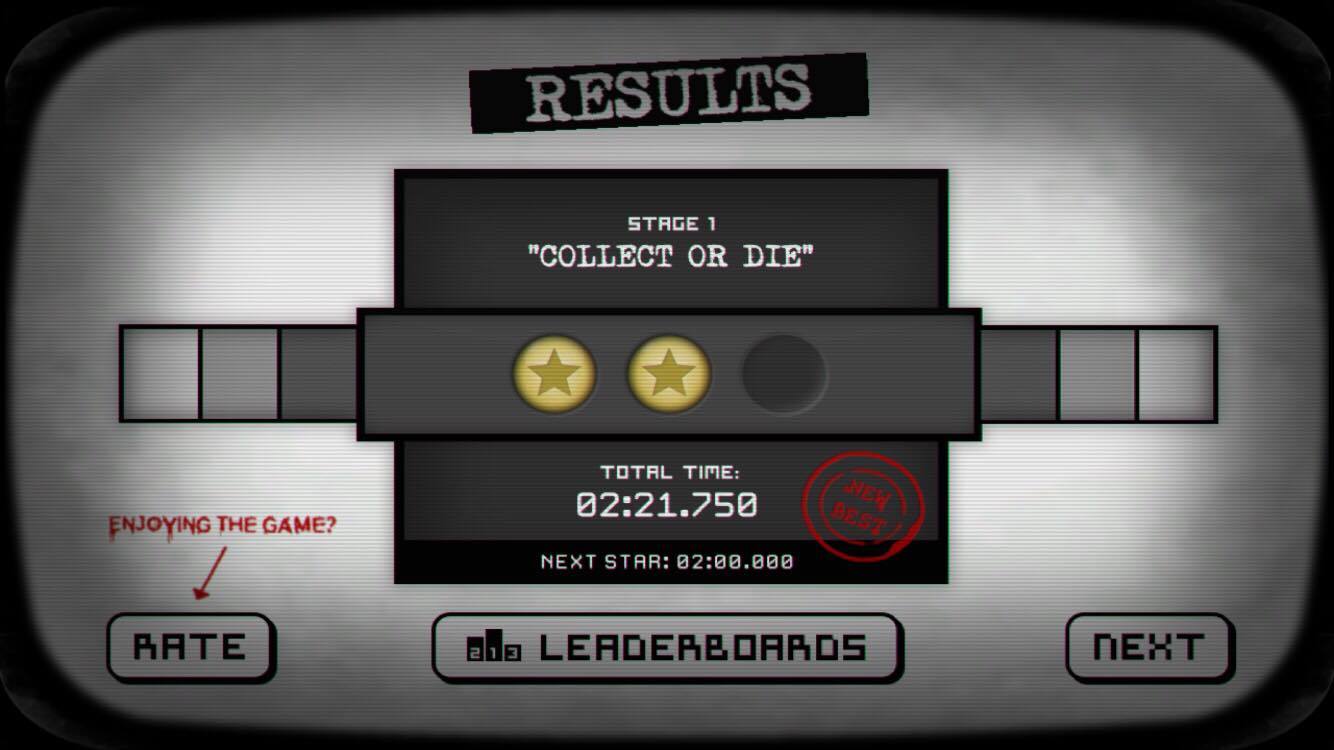 While the platforming and gameplay of Collect or Die is a lot of fun, it’s the presentation that ends up letting the title down. I do like the intriguingly suspicious setting of having to run through this untitled facility, and the way the screen looks like one of those old televisions in a similar vein to Mos Speedrun is a nice touch. However, the context of the game isn’t elaborated at any point, at least within the first four playable level packs. Why are these replicable generic stickmen characters stuck inside this testing chamber, and what purpose does this futile task of collecting these coins fulfil (beyond the immediate goal of staying alive)? While this may seem like nitpicking, Collect or Die’s frequent throwbacks to the Portal series make me want more than the same dull background throughout each of the forty levels, and more than simply one backing track for the course of the entire game. The curious way that the protagonist enters each level through a literal portal is also redundant if none of the context is explained at any point, and will lead to people jumping into Collect or Die because of the Portal graphical references and potentially being disappointed. Adding a bit of narrative, or changing the background slowly with each level set, would add another dimension of depth to the game, and take Collect or Die to the next level thematically. 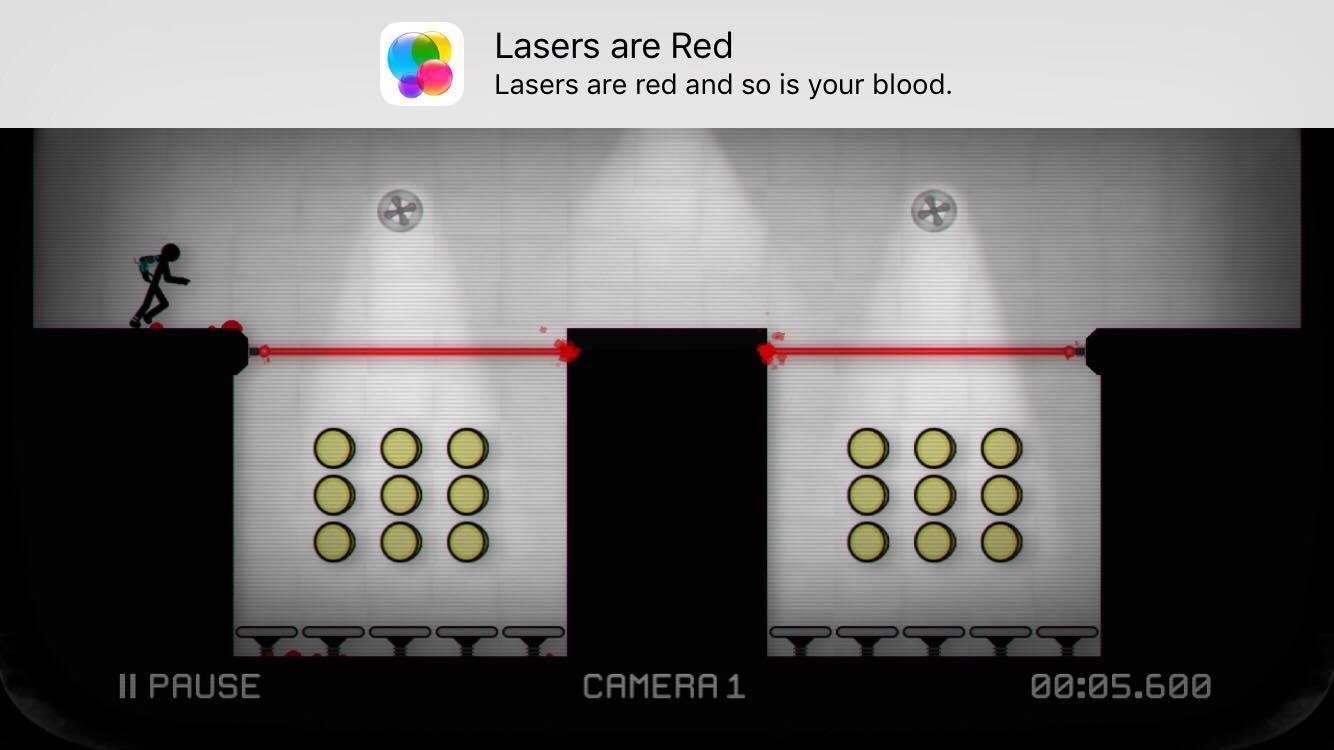 This lack of expanding the context of Collect or Die is only really disappointing because, apart from this dearth of variety, there is an excellent attention to detail throughout the majority of the game. How the security cameras follow your character as they move, how the lights on the ceiling will dynamically swing around when you jump into them, and even how the game will stop like an old VHS player when paused is really nice, and shows that the developers have really thought about how they could bring the retro atmosphere to life. I was also a big fan of the tongue-in-cheek humor that is particularly strong in Collect or Die’s many achievements. Having one such award pop up titled ‘Tilt Controls Suck’ when I suffered a particularly preventable death was legitimately funny, and makes the many fatalities that you will inevitably suffer a lot more enjoyable. However, it all ends too soon. Collect or Die only currently features four worlds that feature ten levels each, and these forty challenges can be cleared easily in under an hour. While there are four other worlds that are labelled as ‘coming soon’, it’s slightly disappointing that Collect or Die doesn’t have more content at launch, as even with a lot of replay value (each world is timed, and up to three stars are awarded for the amount of deaths suffered), more accomplished gamers will be done with the game far too soon.

Despite its brevity, Collect or Die was a lot of fun to play, and has a lot of potential to flesh out its narrative through the upcoming updates. While its emphasis of tilt inputs may seem counterproductive and unnatural for the precision demanded of ultra-hard platformers, Collect or Die fully embraces both its unusual control scheme and its reverence of past platforms such as Mario to carve its own niche out on the App Store. Through being both accessible and welcoming to casual gamers or those unfamiliar with platforming games, and still a challenge to high-score chasing veterans, Collect or Die takes the best elements of the iPhone’s eclectic past, all the while providing an experience that is still highly recommended in 2017.