Cannonfire Concerto ($4.99) is another gamebook release from Choice of Games that offers an unusual premise and excellent world-building. You play as a touring musical virtuoso in a setting that has something of an 18th century European feel. It’s a time of momentary peace for the region, but things are starting to fire up again. It’s up to you to decide whether or not you want to get involved and which side you’ll pull for, but whatever you choose, the show must go on. Written by Caleb Wilson, Cannonfire Concerto is a lighter and faster-paced read than some of the last few ChoiceScript games released, but that doesn’t stop it from creating an interesting setting and having a good bit of fun with it. 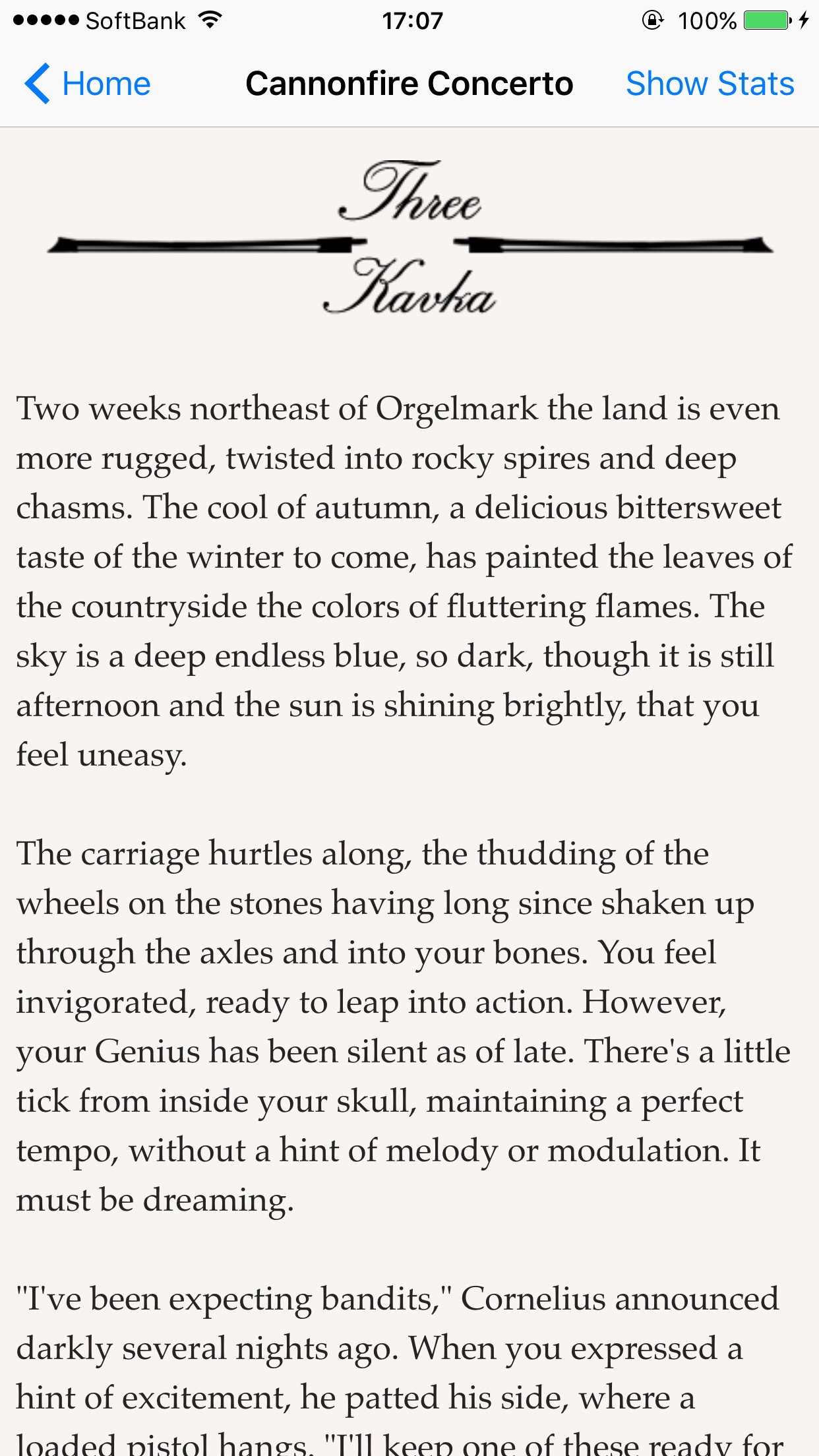 The book’s chapters are mostly structured around stops on your character’s tour. You get to choose your musical instrument, sexual orientation, and gender, along with some of your strengths and weaknesses. Before you choose any of that, though, you’ll find yourself right in the thick of the action, making choices that will influence your character’s path for the rest of the story. It’s an exciting, if somewhat bewildering, start to the adventure. While there are a lot of similarities between the game’s world of Meropa and the real Napoleonic Europe, there are a lot of differences you’ll need to sort out in short order. The most relevant one is the presence of special people who possess something called a Genius. This is the source of exceptional talent in this game’s world, and your character naturally has one that is musically-inclined. Unfortunately, so does your rival, who is also touring in almost exactly the same places you are.

It’s hard to get an exact grasp on what these Geniuses are meant to be. At first, I just thought the story was being cute, but these Geniuses sometimes come off like they’re alien symbiotes. Your character certainly treats their Genius as though it is a distinct entity. We never quite get a clear answer about that, for better or worse. The important thing is that some people have them, some people don’t, and those that do can sense their fellow kind quite clearly. It often feels like Meropa isn’t big enough for all of these clashing egos.

Aside from that, you’ll also need to get to know the various countries and factions that are involved in the tale. Everyone seems to want your character to support their opinions and beliefs, but given that most of the supporting cast in this story are at odds with each other, you’re not going to be able to please them all. Of course, you can try to stay neutral, but you never know when you might need to call on a friend. No favors given mean none in return, and that could be a dangerous prospect depending on how you play things. As usual for a ChoiceScript game, your character has viewable stats detailing their relationships and attributes, with each choice typically altering one or more of them. Those stats will determine the success of certain choices, so it’s important to pick a personality early on and play to it. 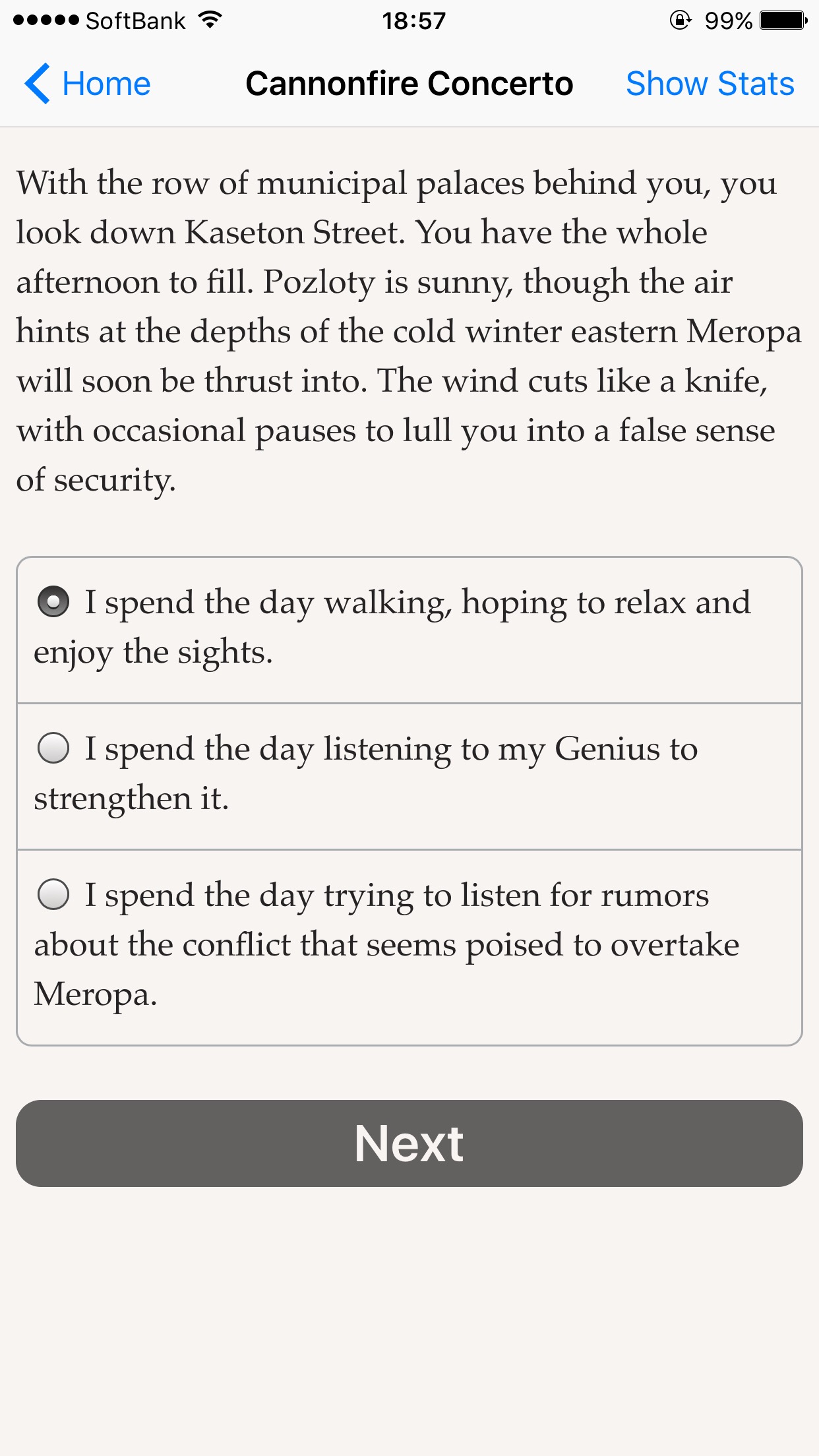 There are a couple of other wrinkles to concern yourself with in Cannonfire Concerto. First of all, you need to make sure your finances stay in order. It’s a long tour, and if you run out of money, things can get rough. You’ll earn money with every gig, but how much you earn depends on your performance. You’ll need to consider the tastes of each region along with your particular musical skills to put together the best program at your concerts. You’ll also need to choose a good outfit. As you play, you’ll pick up various outfits and hats. Before each concert, you’ll be asked to choose what you want to wear. Be careful not to offend anyone, as it will cost you.

While the overall backbone of the story is linear even by the usual standards of these books, there’s a great deal of variability along the edges. With all of the factions and people vying for your attentions, you can choose who and what you want to get mixed up with. Or you can simply try to stay above it all, and make it all about the music. Sooner or later, though, trouble will come to your doorstep, and how you deal with that is going to depend heavily on the relationships you have or haven’t forged along the way. This structure makes Cannonfire Concerto quite a bit of fun to replay. You’ll easily recognize the portions of the story that are the same and can zoom through them, while the various side adventures mean you’ll have something new to read for at least a few playthroughs.

You’ll want to read it all, too. Wilson’s writing style is quite enjoyable to read, as no matter what you do, it feels like it would fit your character. It never feels like the game is unnaturally forcing an outcome on you, either. Oh, some choices don’t quite end up the way you may have envisioned, but it never feels like you’re being railroaded in an artificial way. The idea of a tour schedule is rather brilliant as it gives the story a reason to drag you along when it needs to. Sure, you might want to do more in a particular city, but you simply haven’t the time. You’re a star, after all. You’ve got places to be, and the elite cannot be kept waiting for very long. 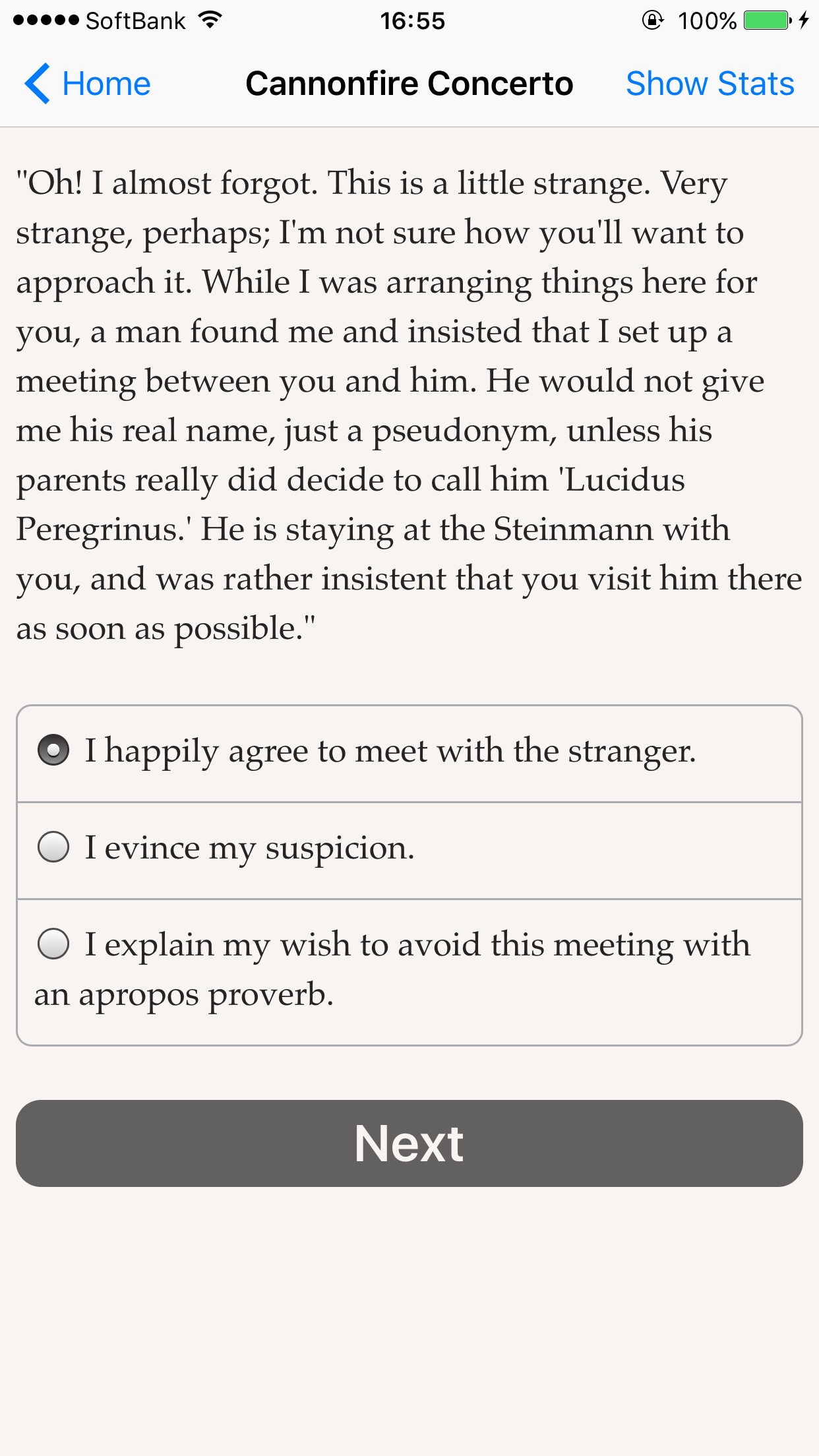 My only beef with the story in Cannonfire Concerto is that it doesn’t quite stick the landing with its ending. It comes a little too quickly, particularly along certain branches. But perhaps that’s the point of the whole thing. You can only spend so much time focusing on your own little bubble before someone comes along to pop it. It feels like your good times are being abruptly halted, which might make for a good moral but not necessarily the smoothest narrative ride. Nevertheless, it’s a good time while it lasts, and I’d certainly like to see more tales set in this world.

If you’re looking for some interactive fiction that has a fair bit of action but still feels like it’s doing something fresh with its premise, Cannonfire Concerto is likely going to be your jam. It’s interesting playing a less direct role than usual in a story like this, and I like that you’re allowed to decide just how deep in the muck you want to be. The fashion choices and music program selections are a minor thing from a mechanical perspective, but that didn’t stop me from getting excited every time I found a new hat, so I’d say that’s a success, too. It’s probably not going to sell anyone who wasn’t already interested in the genre, but if you are, this is certainly worth the read.