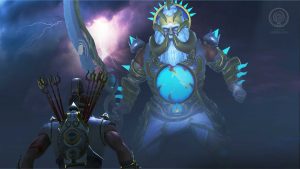 Another interesting tidbit from our forums this morning is the announcement of Legend of Abhimanyu from the India-based studio ACY Entertainment. The game tells the story of the Sanskrit epic Mahabharata which I don’t know much about, but according to Wikipedia, it seems like a pretty cool setting for a game:

The Mahabharata is an epic narrative of the Kurukshetra War and the fates of the Kaurava and the Pandava princes. It also contains philosophical and devotional material, such as a discussion of the four “goals of life" or purusharthas (12.161). Among the principal works and stories in the Mahabharata are the Bhagavad Gita, the story of Damayanti, an abbreviated version of the Ramayana, and the Rishyasringa, often considered as works in their own right.

The trailer looks neat too:

Apparently, Legend of Abhimanyu is a premium title that will be released this month. I’m liking the art, and it’s always fun to play a game that tells a story from a different culture you’re not incredibly familiar with, but I remain cautiously optimistic as (historically speaking, anyway) it seems like it has been easier for developers to craft impressive art and fancy trailers than it has for them to come up with good combat systems. Hopefully ACY Entertainment doesn’t fall into a similar hole. Either way, there’s a ton more info on the game’s web site so definitely give that a look if this has piqued your interest.