Pixeljam has revived their Flash game Snowball! (Free) for Steam and mobile, and the world is better off with this charming pinball game. The whole game is just one table, but it’s an entertaining table, and a game that’s absolutely gorgeous for pixel art aficionados, especially on a big enough screen. The table is intended to take place on the side of a mountain, with the pinball being a Snowball!, the flippers being wooden contraptions operated by people, and the area where your ball falls into being a campfire that melts the ball. It’s charming. 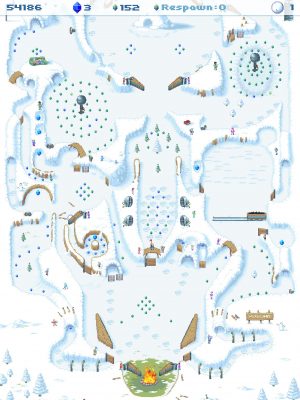 Snowball! is absolutely gorgeous, especially if you play it on the iPad. The pixel density, with the detailed game board here, is a wonderful combination. The game looks fine on iPhone, but there’s a lot of detail lost due to the zoom-outs that occasionally occur to keep everything on screen. Seriously, this game is just stunning on an iPad, and I cannot stop gushing about it. Rarely does a game come around that really justifies the crazy pixel density that modern displays have, and Snowball! is that game. It does mean that the game is a lot harder to keep track of on the iPhone, but eh, it’s far from a venomous fate for Snowball! if you want to enjoy it on the go.

Snowball! doesn’t break too much with the standard pinball formula. A couple of the standout tricks on the board include a mini Breakout-style target-breaking portion, and the two magnetic orbs that you can control. One of the tricks to scoring big on Snowball! is that the gems respawn with higher point values the later in the game that you get. So, you want to travel across the board and take part in its various objectives as opposed to finding various easy scoring opportunities, because those gems respawning will get you more points in the long run. Figuring out how to get the large gems is important as well, as these are worth a ton of points.

The gem respawning is key is the only issue with the pace of the game, as if you can’t get to some of the trickier spots on the board, you can find your progress kind of stagnating as you need to get some of these gems in order to respawn the gems and keep the game going. These are the points when Snowball! just tends to drag on, because it just feels difficult to do anything else unless you hit one or two shots to get to where a cluster of gems are located. 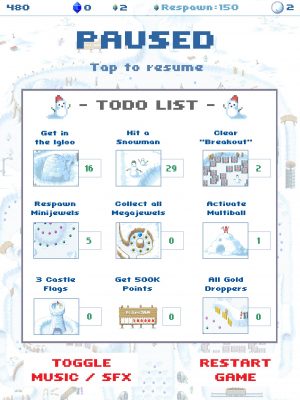 You can nudge the ball in any direction by swiping anywhere on screen, but this comes at a cost: points. It’s 1000 points to nudge the ball, though sometimes this is an additional 1000 points for no discernible reason. This becomes key for winning at this game, because you do have to worry about your ball falling into spots where you have no recourse to save it, and the bump effect will save you. You can quickly activate it by swiping anywhere on the screen, and it will save you. The point cost is fair, as it’s something you can’t use too much, based on how the scoring works. Getting six digits is a great score, so even ten uses of the nudge could knock your score down from this high point.

There’s so many little clever things in and out of the gameplay. The whole board seemingly being a makeshift structure on a mountain means there’s cute little details, like people pushing the flippers that launch your ball around. The magnetic orbs seem a bit out of place, but there’s the mad scientists there, laughing and pressing a button as your ball goes flying around. You can hit snowmen that pop up to get a makeshift multiball, and some of the balls are smaller at first. But as they roll around and pick up more snow, they start to get bigger. They’re just really cool touches that give Snowball! more of a character than many pinball tables have. Sure, they have themes and can reference various forms of media – look at Zen Pinball’s various themed tables. That’s fine, they’re perfectly entertaining. But Snowball! takes a unique opportunity to be its own unique, thematic world.

It’s kind of interesting too because we see a lot of pinball games going in the opposite direction. Pinball games of course are based on real-world pinball games, but digital games have been able to incorporate physically improbable elements. Snowball! thus has an intriguing contradiction. The respawning gems, the magnets, the magic nudges: these are the elements of a fantasy pinball game. But the idea of the entire board being plausibly real, from the campfire, to the Snowball! pinball effects, lends the game an interesting feeling to it, where it’s this very contradictory thing. It’s a pinball game, but it both tries to be a practical thing and a fantasy product. It’s a fascinating contradiction!

Snowball! is just a solid pinball table, and considering $1.99 seems to be the going rate for pinball tables on mobile, it’s a fair price for a charming and entertaining round of pinball. Give this one a shot.