The gravity gun from Half-Life 2 is a dramatically underutilized tool in games. What felt so cool and revolutionary in 2004 has since been stuck to just one game. Kind of like how there were rumblings that the portal gun would show up in a future Half-Life 2 episode, and other games with portals like Portal have popped up. Thanks to Island Delta ($0.99), it has reminded me of how clever an idea the gravity gun. But also, it serves as a reminder of how a tool that requires good physics also requires good design to be used effectively. 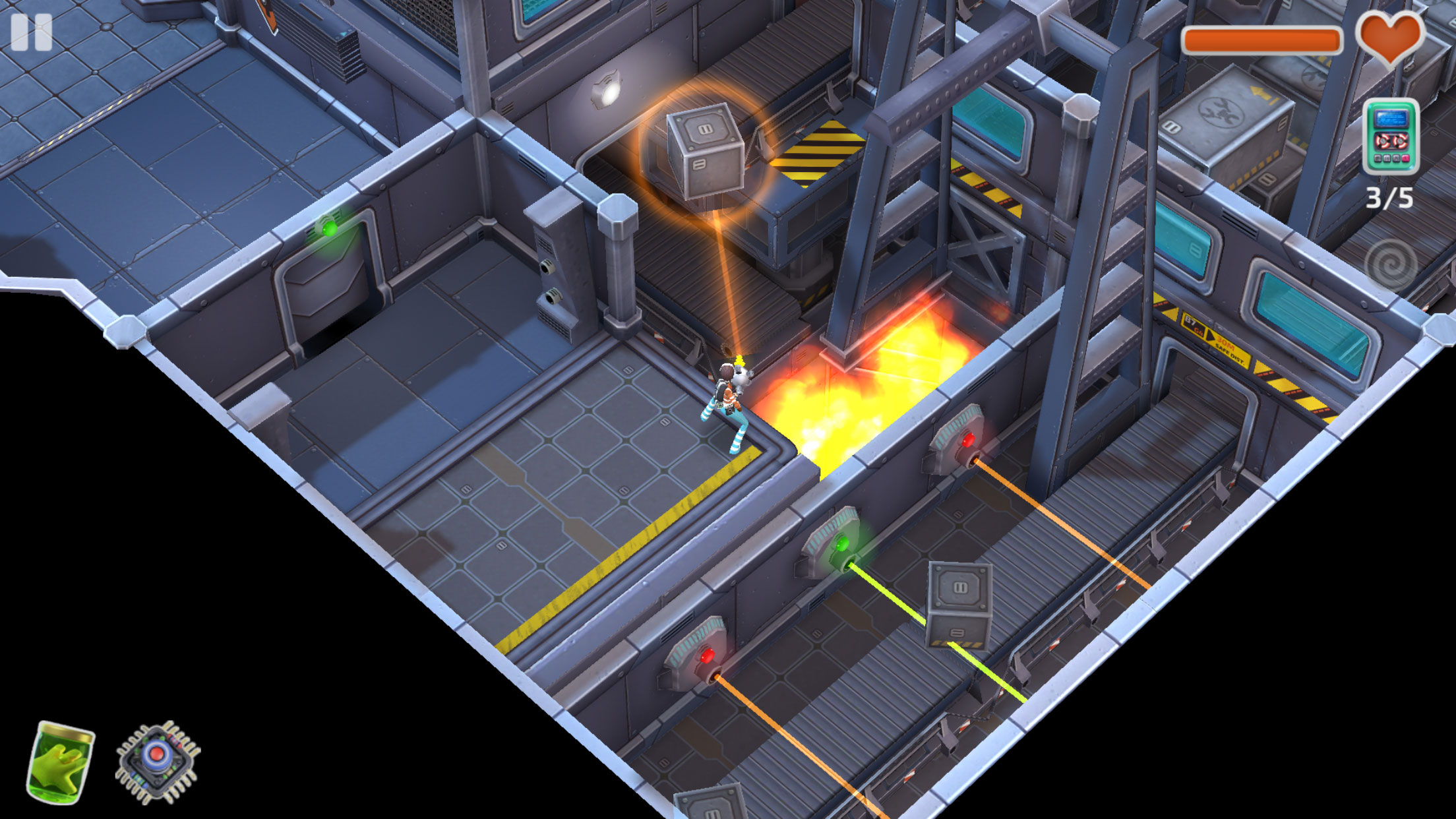 This is an action-physics game where you play as Zoe and Baxter, who are each equipped with gravity guns that can pick up objects and enemies, and launch them in order to achieve various tasks. You’ll pick up batteries and shoot them into their proper receptacles. Crates will be stacked on top of one another to form staircases. Enemies can be defeated by launching themselves at each other or at walls. Baxter has the ability to blow stuff up, though this is used more as a story-specific ability rather than as a core gameplay element. You also have optional items to find, which can be found behind hidden switches, in boxes, and in secret areas.

The core part of the fun in Island Delta is playing around with the gravity gun. Picking up an enemy and sending them to a blunt force trauma demise is entertaining, as is using robots to blow up other robots. Manipulating the world feels really cool, in a way that I wish more games did so. It’s because it makes the player feel like they’re solving their own problems, utilizing the environment to their advantage. And there are clever moments that feel ad-hoc, like using random objects as shields to protect you from turrets that try to shoot you. Or when a walking robot shoots a shot at you, but it moves slowly enough that you can pick them up and pull them into the shot, that kills them. These are the strongest parts of the Island Delta experience, and prove why there need to be more of these physics-manipulation action games. 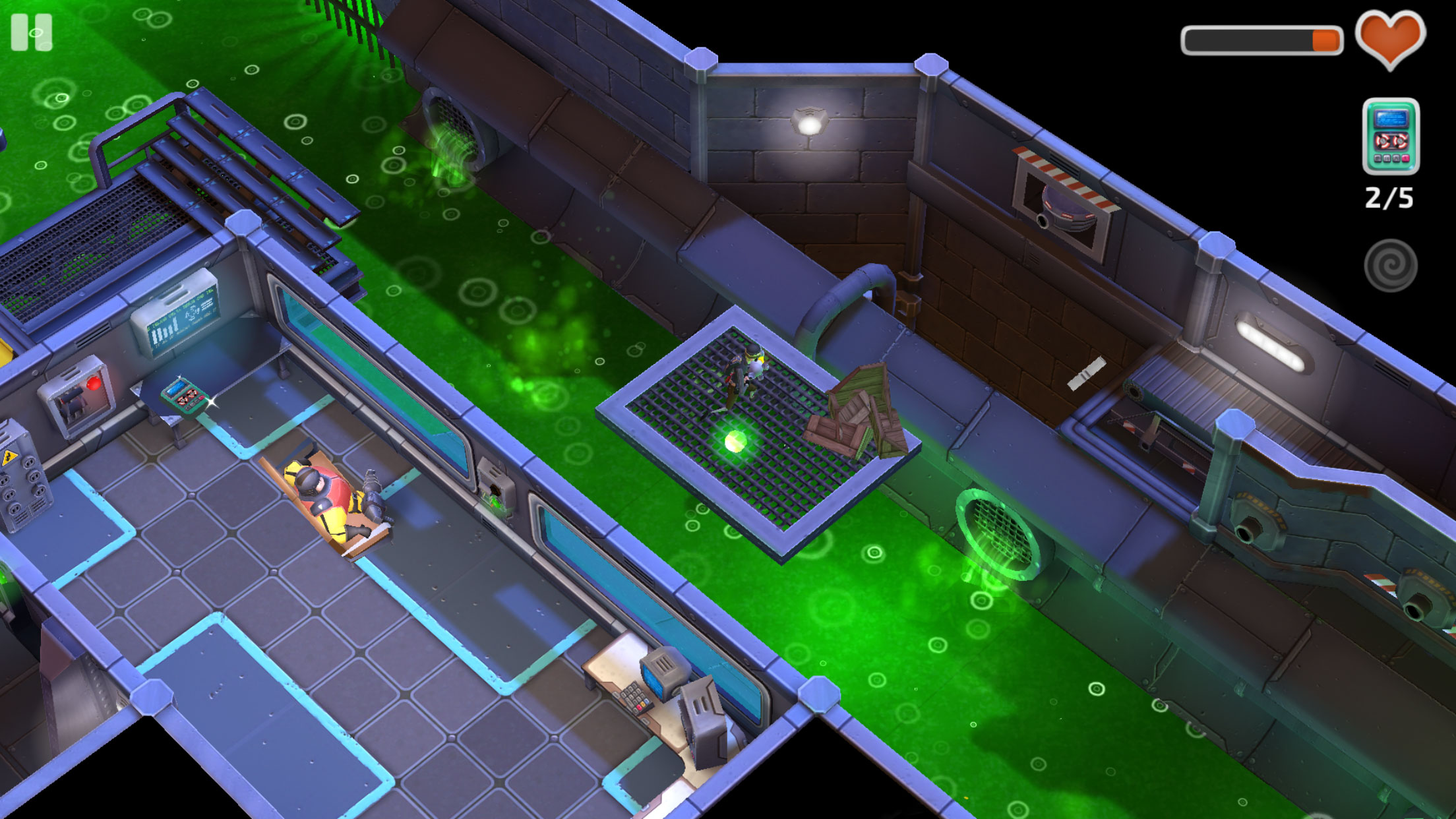 Not all is well on Island Delta, though. The puzzles include a few odd moments, to say the least. One level has you trying to reach a higher platform that’s accessible only by stacking boxes to form a path upward, something you do earlier in the game. Except that it’s on a conveyor belt, so building it in the standard way of putting one crate next to two crates on top of each other is nigh-impossible. My solution? Get one box half on another, and use that to climb upward. It feels awkward, and the game occasionally throws situations that don’t feel clever or designed, they feel like you accidentally discovered how to solve them.

Also, this is not a game that needed combat at all. Or at least, it needs to keep combat separate from the puzzles entirely. Trying to solve that aforementioned conveyor belt/block puzzle is tricky enough. It’s even more difficult when there’s a robot that spawns every few seconds that distracts you from your objective. The game keeps throwing situations that are tough to deal with, but only get more difficult because of the need to deal with enemies while you’re trying to dodge dangerous hazards and manipulate various objects. For example, level 2-8 has you dealing with a giant Tesla coil that charges up and does a ton of damage, while trying to collect boxes and launch them at switches around the arena. That would be tricky enough as you have to be in the danger area to fit the boxes in the switches’ area, but then you have to deal with two different types of robots that spawn, and a cannon in one corner of the room that shoots bombs at you. It’s a lot to deal with, and it’s just annoying to deal with every single one of these hazards combined. 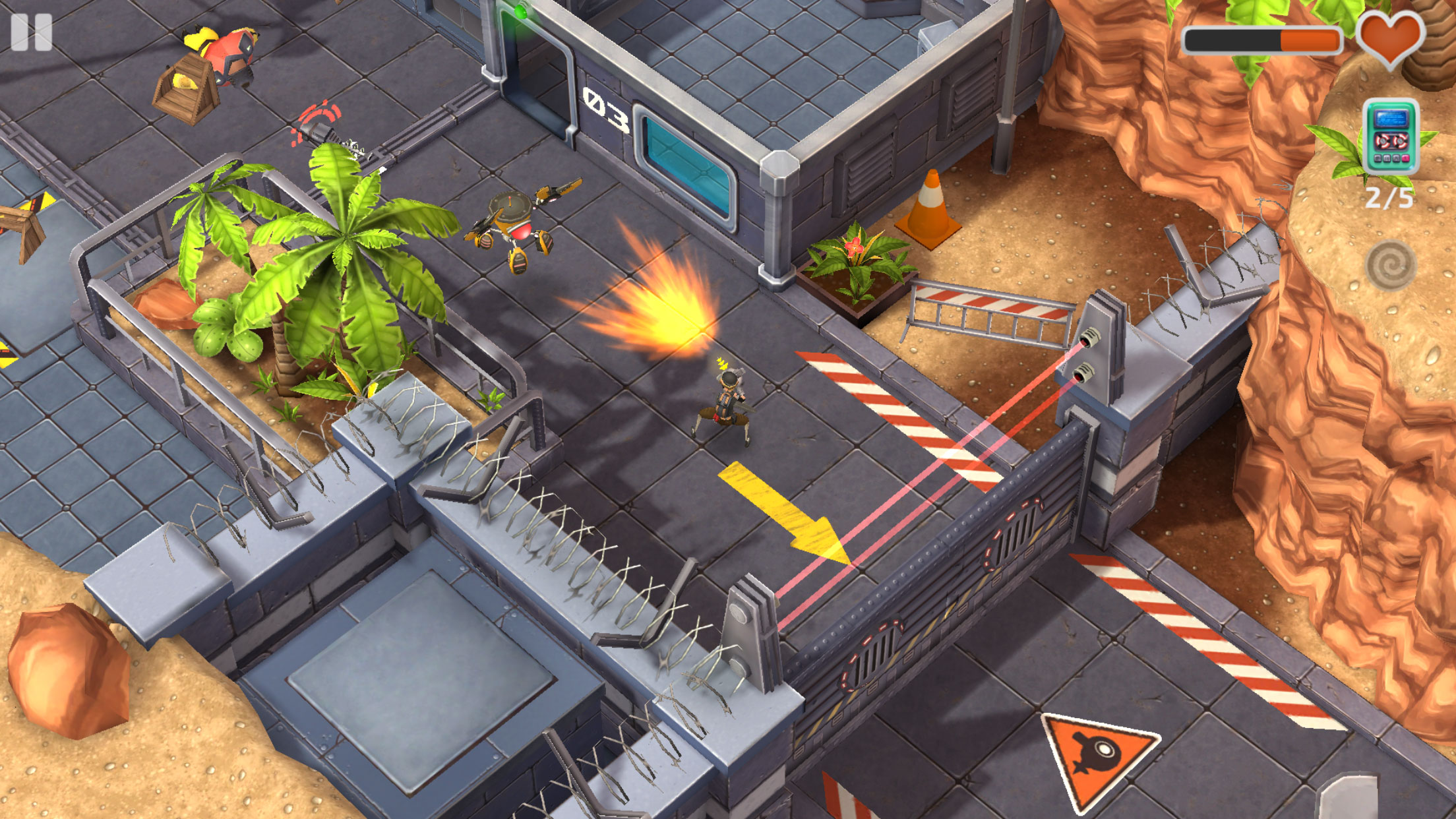 I’m not entirely opposed to combat in Island Delta, because there’s some cool moments. Picking up and throwing someone will never not get old. Launching a robot at a wall? Priceless. But it’s more interesting when it’s not while I’m trying to do something else. If this was a game that committed to just being about infiltrating an enemy base, and using your gravity gun and character abilities to solve puzzles and find clever solutions to win, I think Island Delta would be much better.

The controls are asked to do more than they should be asked to do. Trying to manage fending off enemies while solving puzzles is a tough task when you have to use one hand to move with a virtual joystick, and then the other hand has to serve as a pointer finger to launch objects. Trying to build makeshift structures is difficult because you can’t control the vertical angle of your launches. So, building box structures is particularly annoying because you have to really get your positioning correct to make sure you aren’t putting too much forward velocity on your box launches. And even just placing something down on top of something else is difficult to do. This could be a much more intuitive game but it really isn’t.

Island Delta thus winds up being one of those games where the experience oscillates wildly between two extremes. The core idea is really good, and there’s fun to be had with it. But the actual execution leaves something to be missed. The combat is entirely mismanaged. The design shows a lot of good ideas, but having to deal with enemies shooting at you the whole time that you’re trying to solve the puzzles is absolutely suboptimal. Island Delta will entertain and impress at times, but then sometimes it will just throw things at you that just feel unnecessary. Gravity guns are still fun to play with, but they alone won’t make a game fun. Still, Island Delta has enough going for it that it’s not worth losing the forest for the trees, because there really are some cool moments between the frustrating ones.