With the end of the year upon us, I’m doing my usual job of going back and picking out some games for review that for whatever reason didn’t get one upon release. This year, most of the choices are coming from suggestions from the community, and one of the first games mentioned was PinOut! (Free). Given that pinball is usually like catnip for me, I’m not sure why I missed this one to begin with. I imagine I was knee-deep in RPGs or something like that. At any rate, it’s better late than never, so let’s take a look at this stylish spin on one of the oldest electronic gaming genres.

The goal of PinOut! is simple: you need to help your ball escape the board. You only have the usual means of interacting with the ball, however, and just as in normal pinball, the virtual board is angled such that what goes up will surely come down if nothing gets in its way. Using the flippers placed along the route, you need to carefully launch the ball through a series of mini-tables. Unlike real pinball, if you miss the ball, you don’t lose a life or anything like that. The ball simply rolls back down the board, setting back your hard-won progress, until you catch it with another set of flippers. As you progress through the mini-tables, accuracy becomes more and more important. The last two tables in particular will prove to be futile unless you’ve learned how to aim or are incredibly lucky. 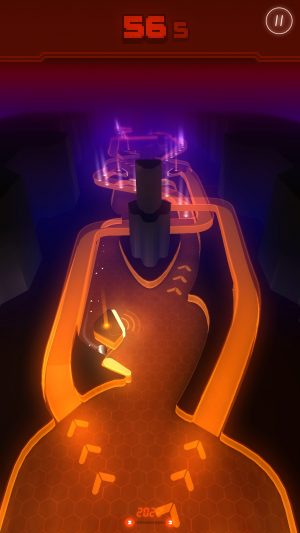 Still, if that was all there was to the game, most people would be able to conquer it eventually through little more than sheer tenacity. There’s one more wrinkle to the game that ups the challenge a fair bit, though. Namely, you’re running on a timer. When the clock hits zero, you’re finished. Because of this, watching the ball slip between your flippers isn’t just an annoyance that you’ll need to recover from. Missing a shot a few times isn’t merely a bit of practice for the inevitable victory. No, every missed ball, every poorly-placed shot, every swing around a roundabout that doesn’t get the ball where you need it to go, puts your run in jeopardy. You can afford to waste some time and still reach the end, mind you. But that buffer is likely to get smaller the farther in you go.

You can replenish some of your lost time in a couple of different ways. There are mini-games along the way that will award you with additional time based on your performance, providing a nice little boost while also giving you something to do other than batting a ball around. The most common way to recover time, however, is by scooping up the little dots scattered along the board. You can’t miss some of them, since the paths leading from one area to the next are packed with these dots. The majority of them require you to take one particular route from mini-table to mini-table, though, making an already strict series of shots into something even more fussy. Aside from boosts to your timer, you’ll also be able to collect a few different power-ups that will assist you greatly. These power-ups do things like slow time, temporarily stop the timer, and so on.

All of these bits of help make the game a lot gentler than you might expect, but at the end of it all, you still need to be able to make those shots reliably. It presents an interesting problem. Those who are good at pinball will likely plow through PinOut! with relative ease, even without those power-ups and mini-games. If you’re not so good at pinball, those supports will certainly help you get farther, but you’re going to hit a wall sooner or later. Probably literally. Regardless of their practical value, these parts of the game do help in mixing things up and adding a little more variety to the proceedings. I particularly love how the mini-games look like the kind of thing that would pop up in 1990s pinball games. 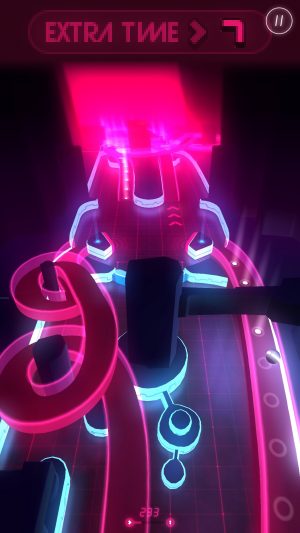 If I had to pick a bone with the game, it’s that old bug-bear that comes from playing too much pinball over the years. The physics in PinOut! are good enough, and the ball feels like it has the weight it should, but there isn’t enough nuance in how the ball interacts with the flippers. In real pinball, there are any number of ways that ball could go, but in this game, it feels like there are a limited number of angles from which it will bounce off the flippers. The table design is such that a vast majority of the shots require nothing more than flipping the ball off the tip of the appropriate flipper, and once you notice that, the game loses a lot of its shine. It also ends a little too quickly for my liking, with only an unlockable score attack mode to keep things going after the game’s relatively short main mode is over with.

Still, there’s something to be said for the experience of playing PinOut!. The game’s presentation is drop-dead gorgeous, with a stylish retro-future design to the tables and an absolutely outstanding soundtrack that changes from area to area. I suspect the game’s physics are going to do the trick for most players for the time they spend with the game, and the challenge has enough bite to it that the game’s brevity is only going to be a serious problem for a minor sub-set of players. I love the concept, too. It’s hard to come up with a variation on pinball that still hits most of the same beats, but developers Mediocre did just that. This feels like a game that was made by people who love pinball, even with its faults. That you can enjoy the game for free with little penalty makes it an even easier sell. There’s a single IAP you can buy for $2.99 that gives you checkpoints, making the whole affair a little less challenging, but I almost prefer the game without that feature.

If you enjoyed this year’s other interesting takes on pinball like INKS. ($1.99) and Pinball Breaker Forever (Free), you’ll probably have a lot of fun with PinOut!. It’s a little on the shorter side, and its board design leans a bit heavily on the same particularly type of skill shot, but overall, it’s still a solid experience that is greatly elevated by its excellent presentation. Given that it’s basically free, it’s hard to come up with reasons why you shouldn’t at least give it a try.