Continuing our year-end mop-up of games we missed out on reviewing at the time of their release for various reasons, the next requested title by our readers was Mini Metro ($3.99). I’ve had an interesting relationship with trains over the course of my life. Passenger trains more or less vanished in the part of Canada I’m from when I was relatively young. Like most places in Canada, my town was far too small to merit a local metro system. I mean, we barely had buses. Thus, I didn’t end up riding a train of any sort until I was in my twenties, and I picked a wild place to start. Imagine a small-town bumpkin arriving in Tokyo, Japan, and trying to make sense of the colorful spaghetti that is the Tokyo Metro system. After a while, though, I got the hang of it, and I now consider myself to be pretty good at navigating the sometimes seemingly nonsensical connections from place to place in that city.

Mini Metro is a great game for giving you a little perspective on how metro maps might end up laid out as they are. You need to build a functioning metro system for each location by placing lines across various stations. There are a limited number of resources available to you, but if you survive each week, you’ll earn some likely strongly-needed methods of improving your system. It’s part sim, part arcade game, and while that seems like an unlikely combo, it works quite well here. Your metro system is represented by a bunch of colored lines, much like you would find on the average map. Stations are marked by one of several different shapes, and commuters appear as smaller shapes indicating the type of station they’d like to travel to. They’ll take multiple lines if they have to in order to reach their desired destination, but the less direct the route, the longer it will take to get them where they need to go. 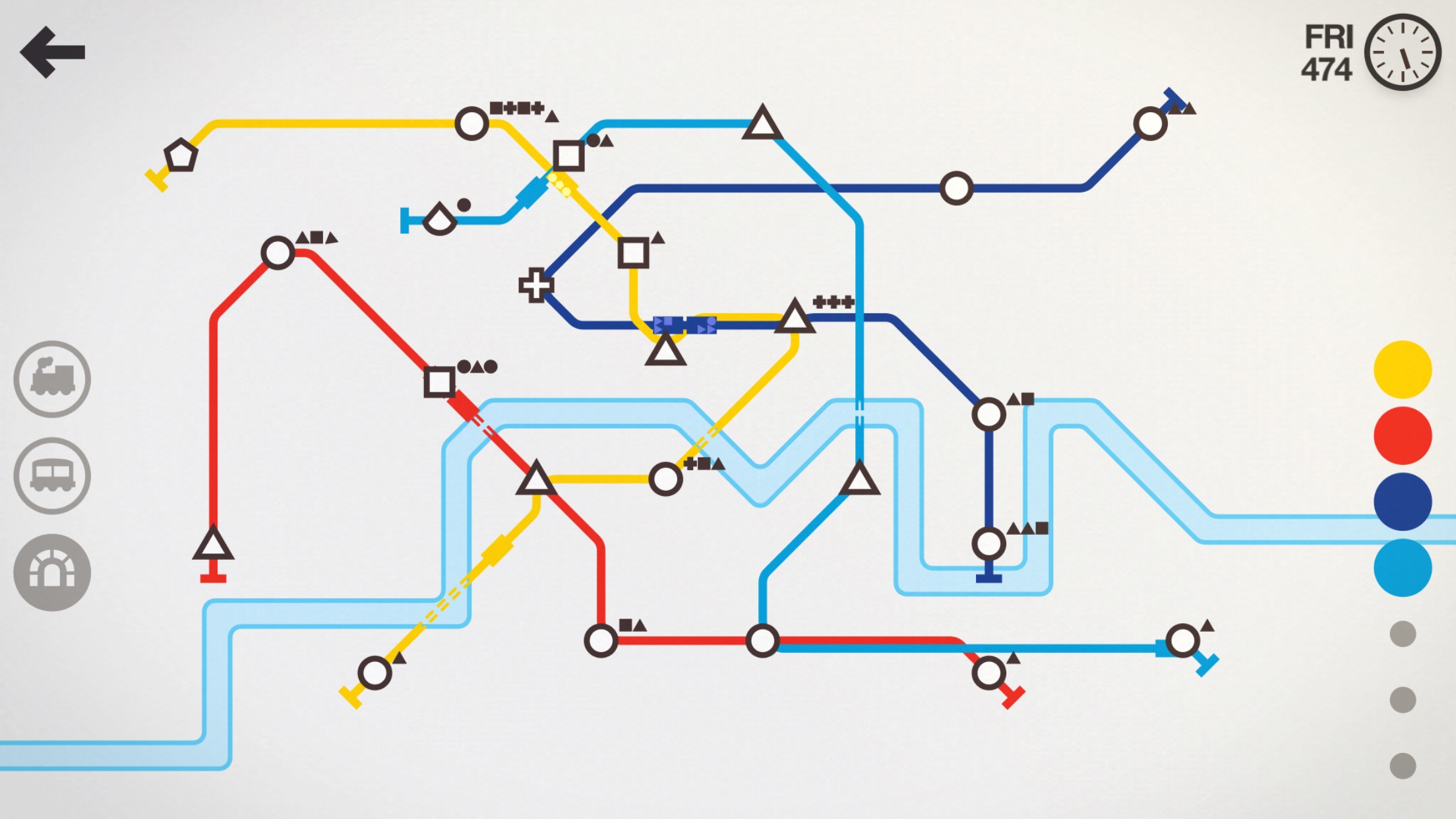 This is a problem because if a station gets too crowded and stays that way for too long, you’ll go out of business and the game will be over. Things speed up as you go along, and an increased number of stations of different types will be need to be looped into your system. It’s easy to place or edit your lines, as you simply need to draw a line between two points with your finger or drag the end of an existing line to place new tracks. Each line can only connect once with any given station, but you can and should have multiple lines going into them if you see fit. You have to be careful, though. You only have a certain number of lines you can operate at any given time, and the longer you make each individual line, the longer it will take your trains to travel the route. Choosing between extending an existing line that is already a little on the longer side or using up one of your valuable spare lines to relieve the burden on your overall system is a tricky balancing act.

At the end of each week, you’ll be given a couple of handy little bonuses to help you keep up the juggling act. First of all, you’ll always get a new train. You can place that anywhere you like to add an additional train to one of your lines. You’ll also be given a choice of one of two different additional bonus resources. These include things like additional lines, extra carriages to affix to existing trains, improved station capacity, and tunnels that can be used to run a line across the water. Realistically, you’ll probably need both things you’re offered to some extent, but you can only have one. Choices like these make the game a lot of fun to play again and again, as you suss out the best strategies for each map. Some maps will require plenty of tunnels to stretch your lines across the area, for example, making it awfully hard to pass on taking them should they come up at the end of the week. 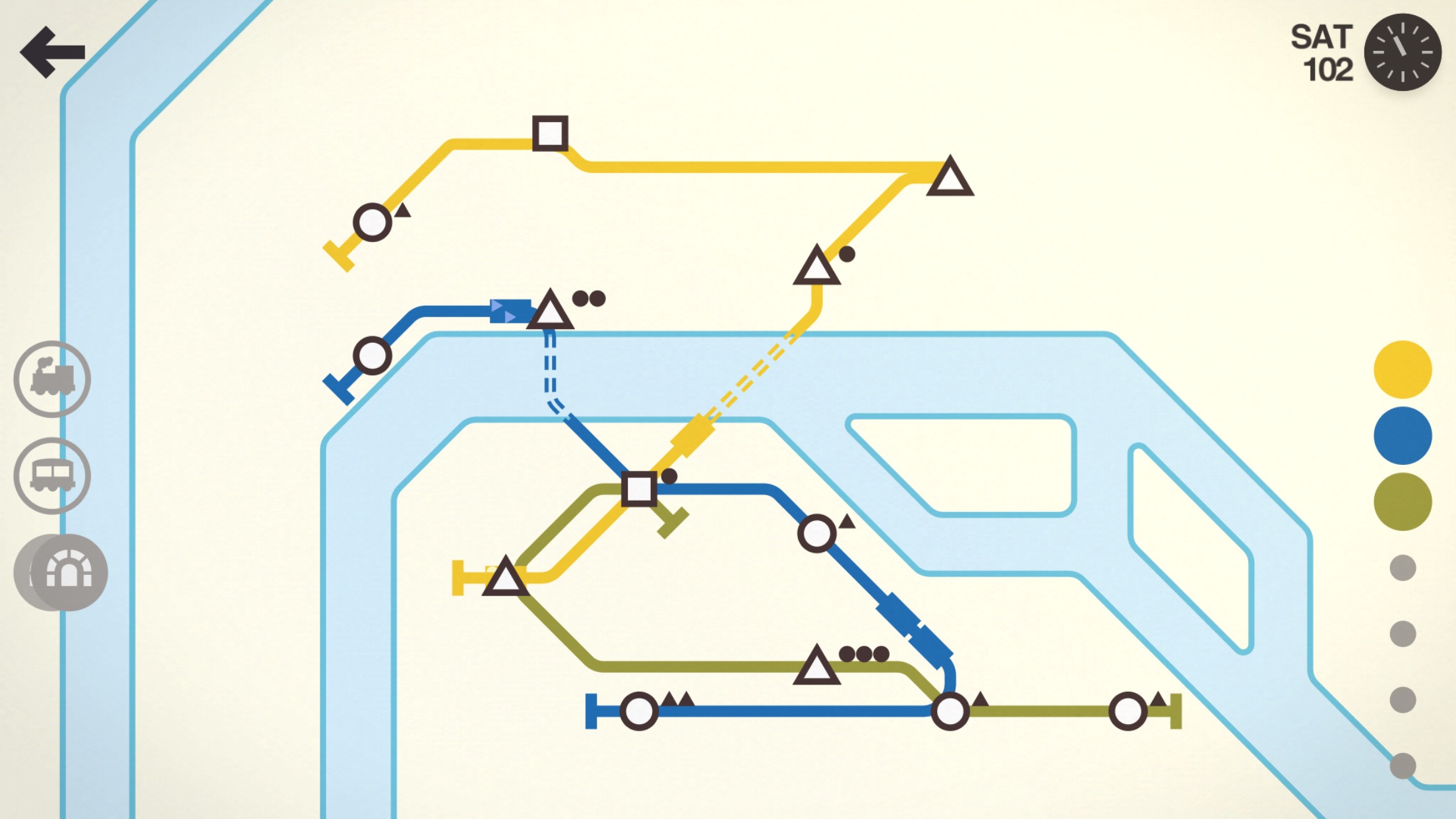 When you start Mini Metro, you’ll have access to a few different maps. You’ll have to unlock the rest of them, but the scores required for doing so aren’t particularly hard to reach. You don’t need to worry that you won’t be able to enjoy the full game without being expert or anything like that. Each map is based around a real city and although most of the stations will appear in a procedural fashion as you play, the different cities will build up in ways that tend to reflect the actual location. While the broad strokes are going to be the same no matter what, having a wide selection of maps helps keep things fresh over the long haul. Ultimately, this is a score-chaser. The sim elements are here in service to creating a deeper experience, but Mini Metro is more of a fast-paced puzzle game than something for serious rail-heads. It doesn’t take long to unlock everything, and although there’s a daily challenge mode, it doesn’t play any differently from normal. Extreme versions of each map add a bit of bite to the proceedings, but the long game here is in competing with your friends to see who can notch the highest scores for each map.

The game itself is excellent all on its own, but it’s even further enhanced by a very slick presentation. As mentioned before, the look of the game is based on how metro maps tend to look, giving it a nice clean style that effectively conveys what it needs to. The audio is equally minimalist, though it picks up the deeper you get into each game. The game is quite easy to play, but it doesn’t do a great job of explaining itself initially. It might take you a while to realize that you can pick up and move any of your tracks and trains at almost no penalty whenever you like, for example. Unless you learn it from outside the game somehow, you might never catch that you can delete a line at any time to free it up for usage elsewhere, either. I appreciate the game’s attempt at an essentially wordless tutorial, but it doesn’t amount to much if it doesn’t tell you everything you need to know about basic functions. Mini Metro also includes a number of achievements and an assortment of leaderboards through Game Center, the latter of which is basically a must for a game like this one. 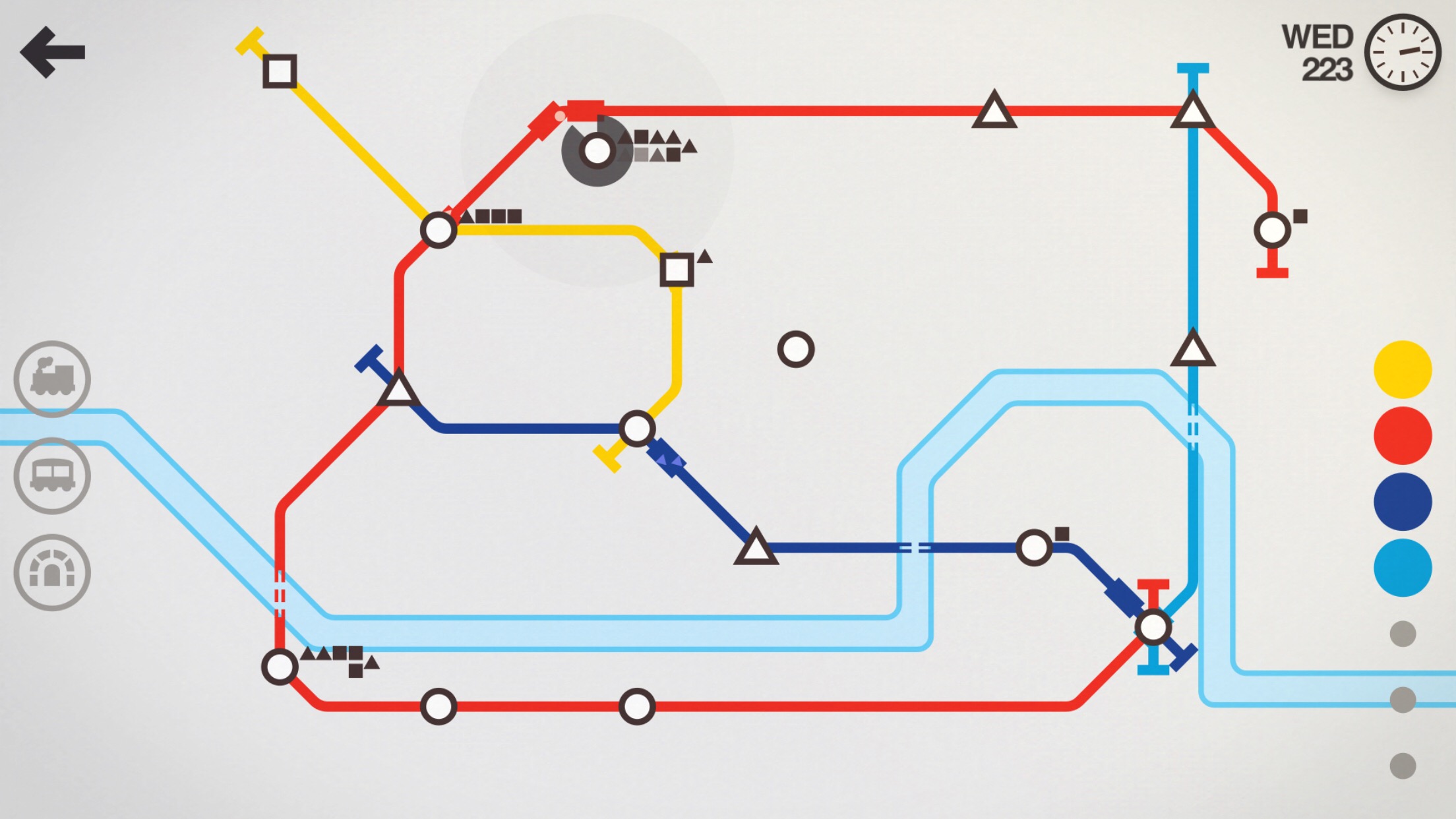 Mini Metro is a terrific arcade puzzle game with satisfying depth to its mechanics. It’s got a good pace to its action and a stylish presentation that fits perfectly with its theme. While it could probably do with a better tutorial, it’s hard to knock on the game otherwise. A large variety of maps to play on helps the game stay fresh for a while, and competing for scores with friends yields the usual quality fruits. Whether you’re interested in trains or not, you should give this one a look. It’s quite a bit of fun. Now, if only they would add a Tokyo map so that I could put my hard-earned real knowledge to use.