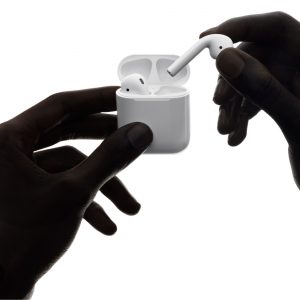 I got my Apple AirPods bluetooth earbuds first thing Monday morning, and after using them for a while I posted a first impressions piece and mentioned I’d follow up later in the week with a more thorough review as I continue to use them. Five days of use later, and I love ’em to the point that the AirPods case has found a new home in the front pocket of my pants with my keys and wallet, which is about the highest praise I could ever give a piece of portable electronics.

Originally announced along side the iPhone 7 back in September, the AirPods have been subject to incredibly harsh criticism from seemingly all corners of the internet prior to their release. “You’re going to lose them" was crowed over and over, like Ralphie being told he was going to shoot his eye out. In reality, while I suppose it is possible to misplace the case holding your AirPods, just randomly losing one doesn’t seem like a very likely scenario unless you just have really bad habits of not putting things back where they belong.

Unlike the plastic case that Apple’s wired EarPods have come in (Which was curiously absent with the iPhone 7 pack-in EarPods!) that really only served as a slightly nicer way to store your headphones, the AirPods case is a vital part of the whole AirPods setup. Opening the case triggers the whole AirPods pairing process, and it’s also how you charge them, so it seems like I just naturally end up sticking it back in my pocket when I was using them. Then, because you want your AirPods charged up for the next time you use them, you put them back in the case when you’re done. It doesn’t even really seem like it’s something you think about, as it’s just where they belong.

Aside from just randomly misplacing one, the other fear seemed to be them falling out of your ears. I’ve made it a point to wear my AirPods whenever I’ve done physical things this week, deliberately exaggerating movements, and just randomly shaking my head around until I’ve come close to making myself sick and I can’t get these things to come out on their own. Gym routines, snow removal, running, head-banging to hair metal, you name it, and they stay put. Even deliberately flicking the antenna arms that hang down outside your ears doesn’t really dislodge them. If you somehow do manage to knock one out, your music stops instantly, so it’s hard to really imagine many scenarios where you’ve got them in your ears and you just randomly lose one unless you’re just supremely unobservant.

The sound quality of AirPods is great, but they share the same caveat as Apple’s wired EarPods: Because they just sort of nestle themselves in your ears, there isn’t a whole lot of sound isolation that occurs. Depending on how you’re going to be using your AirPods, this could be a good thing or a bad thing. When I’m out running, I like wearing headphones that don’t block out all the noise around me so I can hear things like dogs barking, car horns honking, and other things I might need to be aware of. For that use, AirPods are fabulous. If you’re listening to music or podcasts in an environment where you want the noise reduction that a big beefy pair of highly insulated headphones offer, AirPods might not be the best solution as your only defense against background noise is to crank the volume. That said, they perform admirably at high volumes without any distortion. If you’re curious how the AirPods sound, they’re indistinguishably similar to the wired EarPods you’re likely already using.

One feature that Apple didn’t advertise that much that I’ve found myself loving with the AirPods is you can totally just use one of them if you want and keep the other in the case. Maybe it’s a holdover from listening to ancient single-earbud mono AM radios as a kid (which probably really dates me), but my preferred way of listening to podcasts has always been to just have one earbud in with the other dangling around somewhere. Additionally, a single AirPod can totally work just like a traditional Bluetooth headset to make phone calls. It’s a cool feature I’ve been using quite a bit, which never was really possible on the other Bluetooth earbud sets I’ve used which all are connected to each other with a cord. Of course, if you want to have both AirPods in to place calls that works too. (Although stereo calling has always felt weird to me.)

I was able to get the advertised five hours of battery life out of my AirPods via a all-day listening marathon, which I’ve seen some criticism in that it isn’t enough juice to get you through an entire work day. That’s true, but they also have the same rapid-charging tricks of other wireless headphones that give you three hours of charge after spending fifteen minutes in the case. A super practical use case if you plan on listening all day is to just drop them back in the case when you take your break or go grab lunch or whatever else and you’ll have enough charge to make it through the day. Apple claims the AirPods case holds enough juice for an extra 24 hours of listening, and I’ve been unsuccessful in using up the charge in the case this week. (That’s roughly five hours of listening a day.) 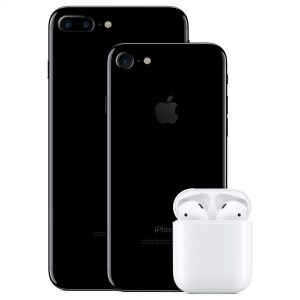 $160 seems a little on the expensive side, but pricing is always going to be a highly personal thing for these kinds of personal electronics. The way I look at things, I don’t skimp on stuff that I use all the time. I don’t mind buying a nice mattress because I spend a third of my life on it. I also buy expensive lens coatings for my glasses since I spend the other 2/3 of my life looking through them. Headphones also exist inside that universe of rationalizing paying more than you usually would because of how often you end up using them. I tend to look at this stuff as a “cost per use," instead of initial purchase price. It’s hard to really compare the AirPods to anything else too, as nothing else really comes close to the size and functionality of these, particularly when you add the magical iCloud-enabled pairing that the W1 chip inside of them provides.

Switching AirPods in between Apple devices is just as simple as my W1-enabled Beats Solo 3’s. The first time you open the case, your iOS device will ask if you want to pair with them, at which point they’re just available as an audio output device that you can switch to on any modern iOS device or Mac. It’s really slick how it all works, and makes the awkward song and dance you needed to do when you wanted to use a pair of Bluetooth headphones on multiple devices feel really antiquated comparatively. That being said, you can still use AirPods as a Bluetooth audio device on older Apple (and non-Apple) hardware. You just hold down the button on the back of the case to force them into pairing mode and you can connect to them with anything that can connect to Bluetooth audio devices. You’ll need to do a similar re-pairing when you want to use them again on your iOS devices, but, that’s really not that big of a dealt because the W1 pairing prompts are so simple. Aside from simple pairing, the W1 chip also enables some of the most impressive range I’ve ever experienced using wireless headphones, easily allowing me to wander around my entire house without losing connection to my iPhone that’s plugged in and charging.

Really, the only thing that I think is going to be an actual issue for folks with AirPods is that without a wire, there’s no place for the in-line volume and play/pause button to go. The only controls you have for the AirPods when they’re in your ear is taking one of them out pauses your music, putting it in resumes, and double tapping the side of one invokes Siri. (You can also change it so this double tap works as a play/pause button.) If you want to change the volume of what you’re listening to, there’s three ways to do it in order of least to most obnoxious: You can just use the side volume buttons on your device, you can use the volume sliders on the screen of your device, or you can use Siri which is slow, stupid, and also requires internet connectivity. Turning your music down by double tapping an AirPod, waiting for Siri to be invoked, then saying “Turn the volume down" and waiting for it to respond is without a doubt the dumbest way I’ve ever heard of to turn your music down (or up).

Crazier yet, it seems like when you ask Siri to do this it only turns your music up (or down) one blip on the on-screen volume display, so more realistically you’d probably be asking Siri multiple times to change your volume. It’s incredibly silly, particularly if you keep your iPhone in an arm band or similar while running and depend on headphone controls. (Edit: TouchArcade commenter FuZion pointed out that you can specifically ask Siri to “set the volume to 50%," or any other percentage, which is a real handy tip.) That being said, this hasn’t been a problem at all in how I’ve used them this week, as when I’ve needed to talk to someone with my headphones in I just take an AirPod out so my iPhone pauses. It’s just another really weird thing that makes you wonder if Apple realizes that “Just have Siri do it" isn’t as great of a solution as they think it is. Also, if you’re somewhere without internet access like on a subway or a plane, or, you know, a lot of places people use headphones, this functionality doesn’t work at all.

While I haven’t subjected my AirPods to any serious stress beyond just normal everyday use, a product release wouldn’t be complete without YouTube torture testers doing all sorts of insane things. In particular, short of just purposefully smashing them, AirPods have proven to be incredibly resilient in drop tests. They even made it through the laundry as one YouTuber ran them through both the washer and the dryer and they still continued to work fine. They even worked after being totally submerged under water:

Aside from moving the in-line controls a lot of people are likely in the habit of using to annoyingly slow Siri commands, it’s really hard to find things I don’t like about Apple’s new AirPods. I rarely would carry the wired EarPods with me in my pocket as that was just asking for a mess of tangled cords and I’ve really avoided the social stigma that comes of being one of those people who always has a Bluetooth headset in their ears. Having a pair of tiny, super-convenient headphones that double as a Bluetooth headset that easily fit in my pocket has really changed my usage patterns of how often I’ve been consuming audio content and communicating using my phone. This was all possible with wires, of course, but there’s just something so quick and simple in just removing your AirPods from their case, popping them in your ears, and going about whatever you’re doing.